German holidaymakers topped up their tans and downed beer today on Majorca’s fabulous beaches – as they packed out resorts usually over-run by Britons.

Sun-worshippers from the likes of Cologne and Frankfurt enjoyed the island’s pristine beaches with Germans not required to quarantine upon their return – while frustrated double-jabbed UK travellers languish at home.

Resorts on the holiday island, which are normally full of sun-seeking British tourists, are packed with Germans instead this summer – thanks to the UK’s tough quarantine rules.

British visitors continue to be almost non existent on the Spanish island due to the UK Government continuing to list Spain as an ‘amber’ country on the coronavirus watch list.

The strict ruling means any UK citizen returning from Spain has to quarantine at home for ten days and undergo two Covid tests, whether or not they have any symptoms. 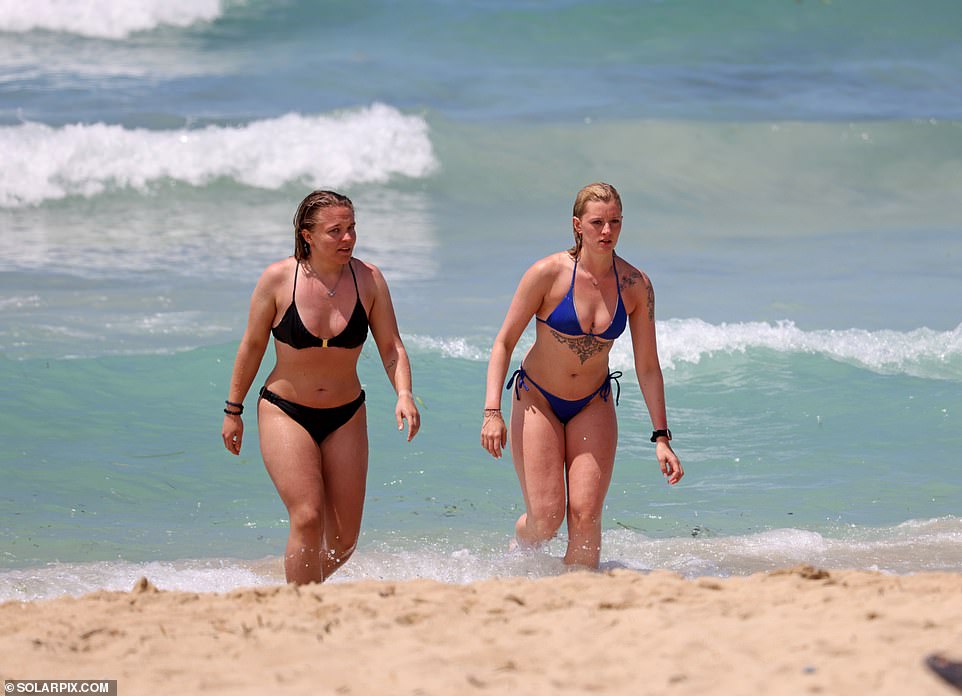 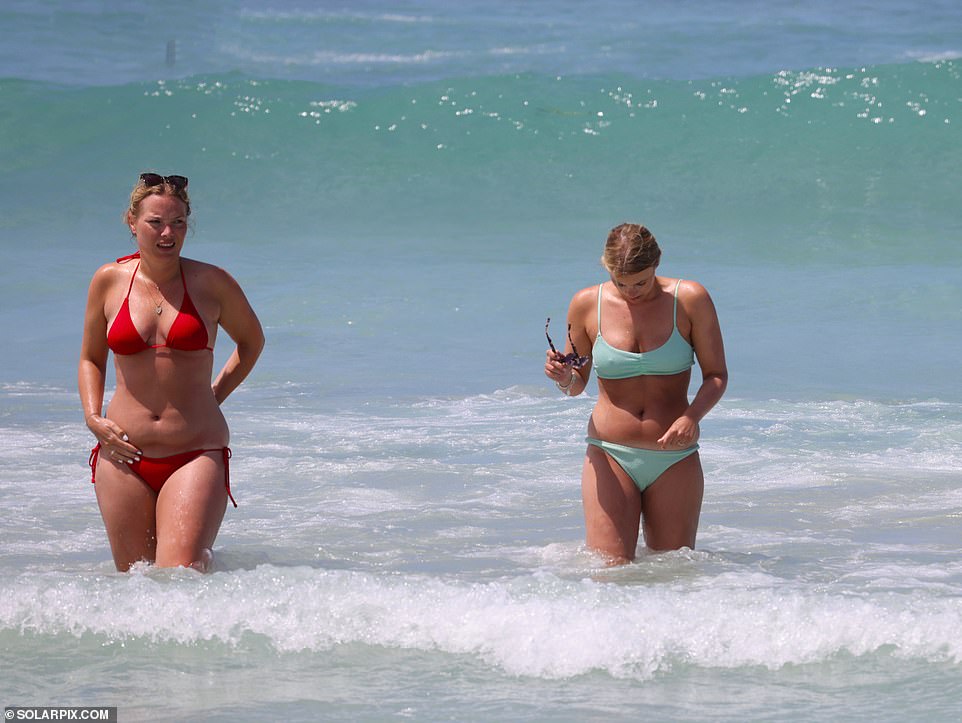 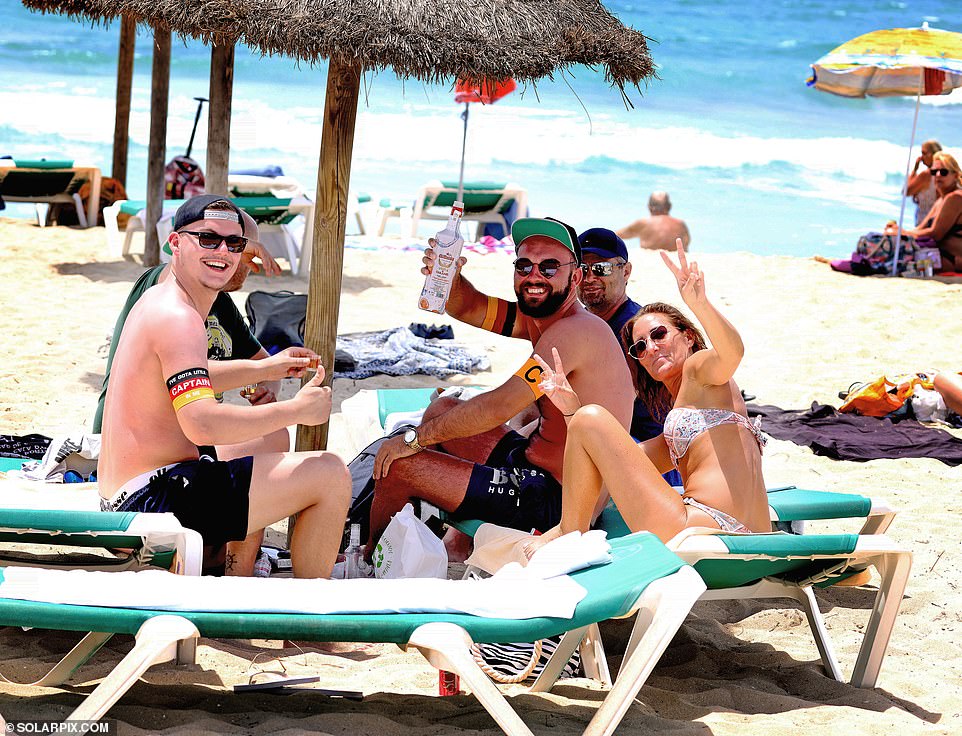 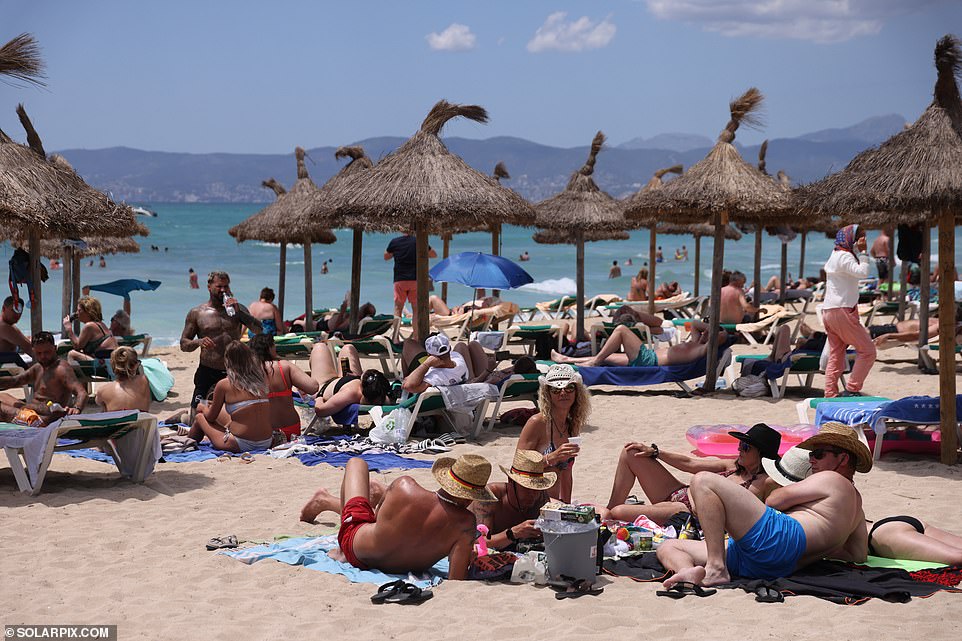 Sun-worshippers from the likes of Cologne and Frankfurt enjoyed the island’s pristine beaches (pictured, S’Arenal beach today) with Germans not required to quarantine upon their return – unlike their frustrated British counterparts 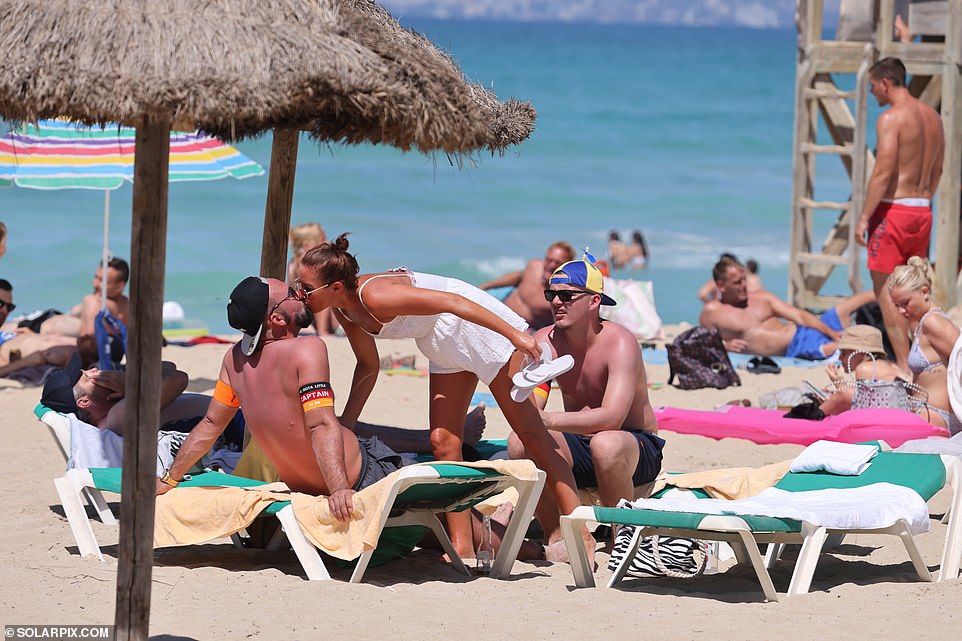 The German government is in contrast allowing its citizens to return from Majorca without the need to quarantine and is only insisting they have a single negative PCR test before heading home.

The move has enabled Germans to top up their tans on Majorca’s fabulous beaches, down beers in bars, and watch Euro 2020 matches on big screens with hardly a Briton in sight.

Meanwhile British holidaymakers forced to staycation in the UK under cloudy skies can only hang on to a glimmer of hope that rules may be relaxed later in the summer to allow people who have had two jabs to be able to return from amber list countries without quarantining.

Cafe and bar owners in areas such as S’Arenal on Majorca’s eastern end of Playa de Palma have welcomed Germans with open arms and hailed their ‘immediate’ impact on food and drink sales.

And with good-natured humour, those lucky enough to enjoy the Spanish sunshine playfully ribbed their stay-at-home their European counterparts by joking: ‘Get here quick before we take all the best spots!’

Many Germans admit they are scratching their heads over why fully-vaccinated Britons still have to quarantine for up to ten days when they go home.

Savas Cirak, 26, a police officer from Frankfurt, said: ‘It’s my first time in Majorca and I’m loving it. It seems like a really nice place. We’re here for sun and fun and we want to go back with our batteries recharged.’

His friend Timo Digenhardt, 21, who is in Majorca for a five-day break, drank strong German lager while playing beach volleyball.

He added: ‘Getting here was so easy. We didn’t have to show anything apart from a passenger locator form to get onto the island where we had to register things like our address in Majorca and we can carry on with our normal lives when we get back home without having to quarantine.

‘I’m really happy to be here and am looking forward to a good time and a few beers with friends – although this is a bit of a warm-up because I’m back again in a fortnight for another holiday.

‘Every time we get some days off at work over summer, the plan is to get away as much as we can while it’s so easy. I imagine Majorca is suffering because of the lack of Brits because it’s an island that relies heavily on tourism. 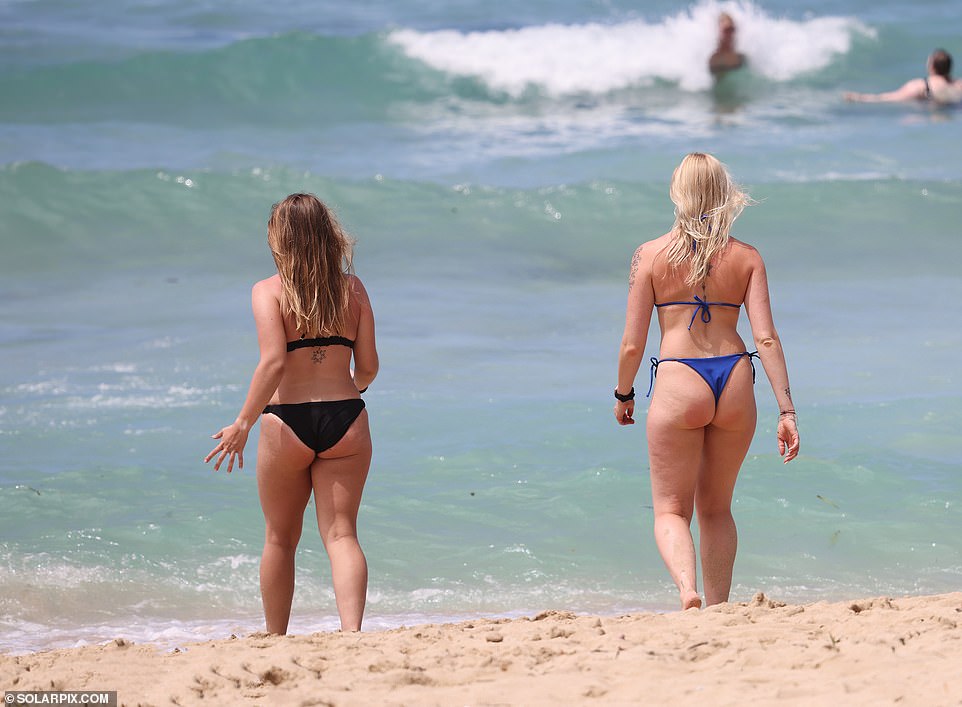 Two women walk down the beach towards the clear waters off Majorca as they enjoy their holiday today. Resorts on the holiday island, which are normally full of sun-seeking British tourists are packed with Germans instead this summer – thanks to the UK’s tough quarantine rules 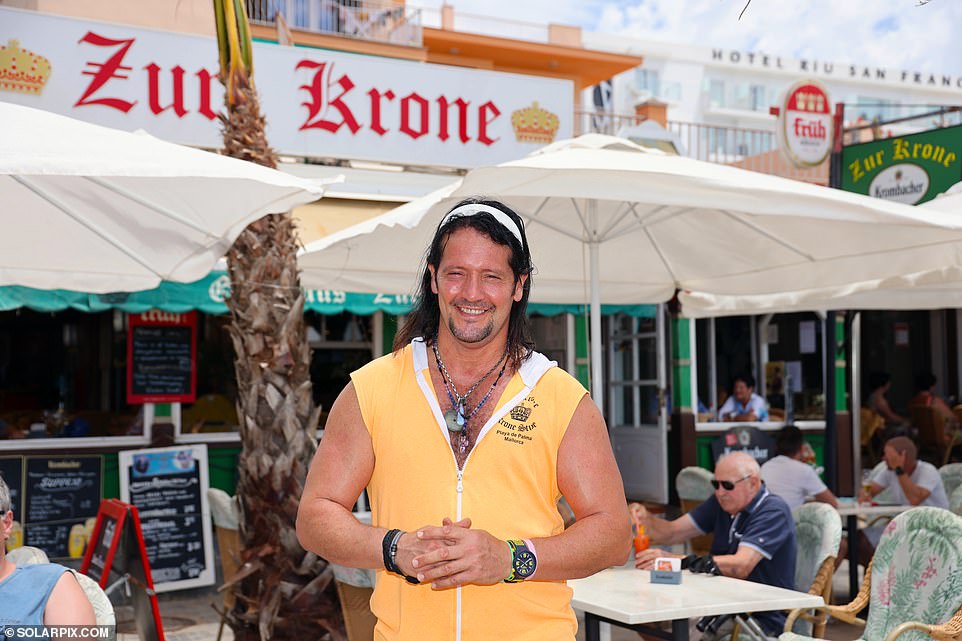 Christian Lafourcade (pictured today), the Uruguayan-born owner of German-popular bar-restaurant Zur Krone overlooking S’Arenal beach, said: ‘We only closed once during the pandemic which was last year for a fortnight when we had to’ 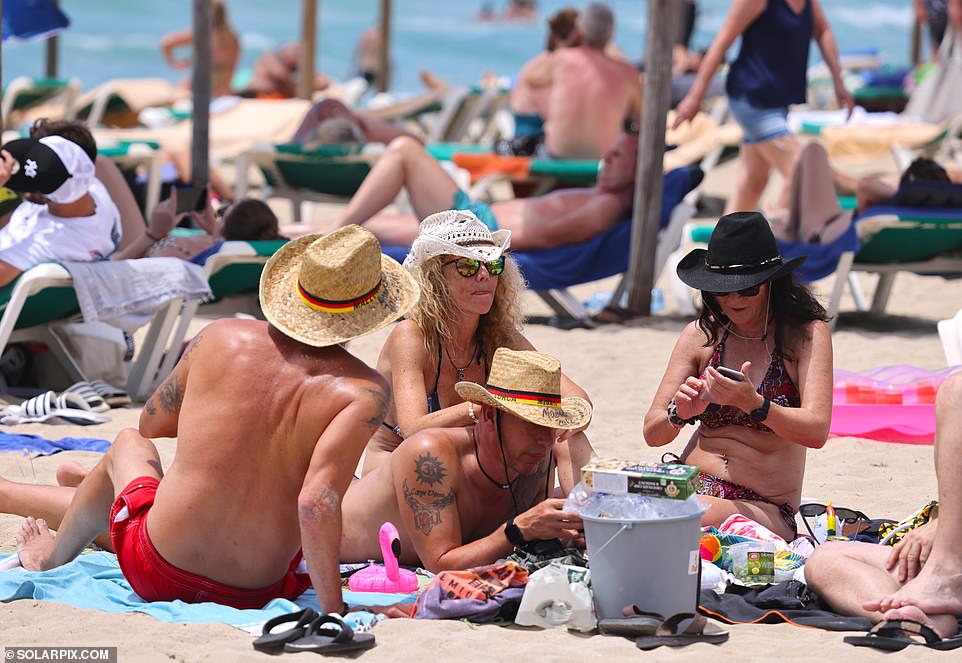 The German government is allowing its citizens to return from Majorca without the need to quarantine and is only insisting that they have a single negative PCR test before heading home. Pictured: Tourists from the nation on the beach today

Consultant Patrick Schaefer, 49, from Cologne, is on holiday in S’Arenal with friends including stock manager Uli Becker, 48.

‘We know Majorca well and the nightlife is more toned down than it was in 2019 pre-pandemic but it’s still a great place to be,’ he said.

‘I send my greetings to the British holidaymakers who can’t be enjoying the sunshine here but in a friendly way because it would be great if they could come here too.

‘I’ve had both my jabs but Uli has just had the vaccine and had to get a Covid test done before we came out but there’s no quarantine required when we get back.’

Philine, 19, flew into Majorca with partner John from their home near Hanover on Monday hours after Spain stopped demanding negative Covid tests for German holidaymakers from all but two states.

She said: ‘I’m shocked British holidaymakers who have had both jabs still have to quarantine when they return to the UK. I didn’t know anything about this.

‘It seems ridiculous, although I also have to say I was shocked when we touched down at Palma Airport and discovered we didn’t need to show anything apart from our passenger locator form to get into Majorca.

‘We got our Covid tests done thinking we would be asked for them when we arrived but apparently the rules changed the day we flew and they weren’t necessary. Nothing makes sense anymore. I can understand why people in the UK are upset.’

Squashed in between the Germans packing out the eastern end of Playa de Palma was Ineke Rijkens, 61, from the town of Nieuw-Buinen in the province of Drenthe, with husband Jan, 60, who’s had one AstraZeneca jab, but won’t get their second one until July 6.

She said: ‘If we were in mainland Spain we’d have to quarantine when we got back home but the Balearics and the Canaries are on our country’s green list so as things stand at the moment we can carry on with our lives as normal when we get back home. That’s the reason we’ve come here.’ 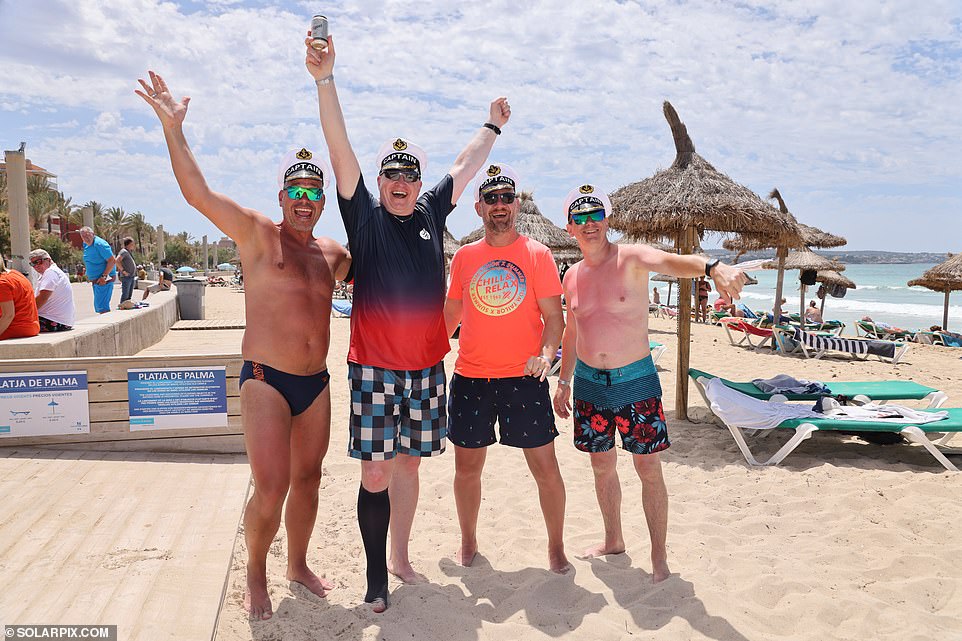 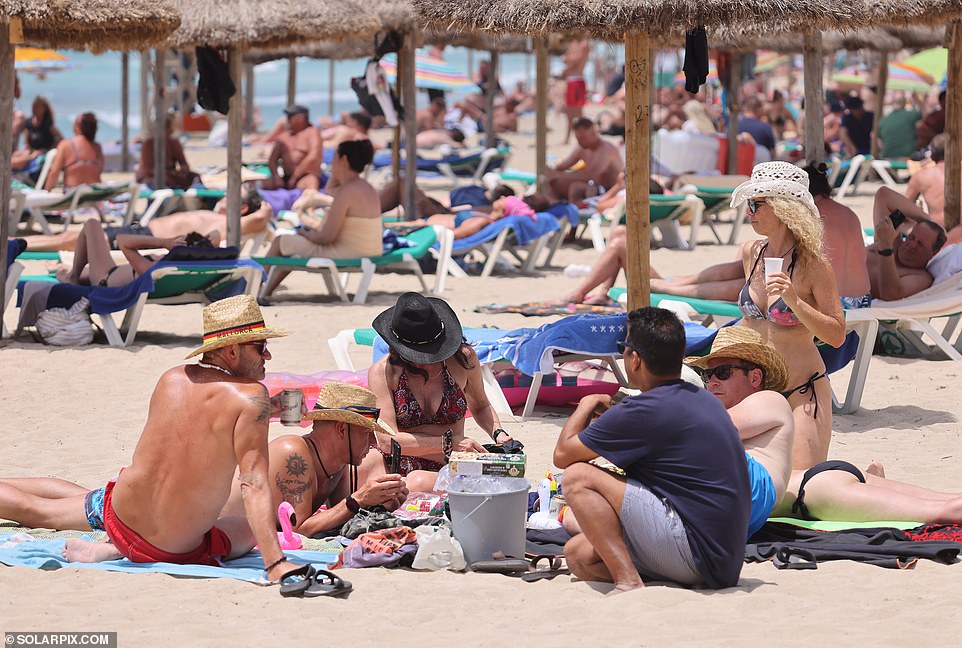 ‘We arrived last Friday and we’re leaving this Saturday. We had to have a negative PCR test to fly here because we hadn’t had both our vaccinations but we don’t need to show anything to fly back to Amsterdam.

‘All we can do is go with what we can do which is why we are here now enjoying the sunshine and looking forward to a few more days of good weather, great food and wonderful beaches.’

Despite being on the UK’s amber list, Spain is continuing with the easing of its anti-Covid measures this weekend by making face masks non-compulsory outdoors across the country from Saturday.

All the strict night-time curfews in force as part of a six-month state of emergency which ended on May 9 have now been lifted.

Late-night bars and restaurants in Majorca can now open till 2am.

And this Friday 1,500 people are due to take part in a pilot event at Ibiza’s Hard Rock Hotel to test Covid-19 protocols within a night-life and music setting as clubs look forward to a return to business. 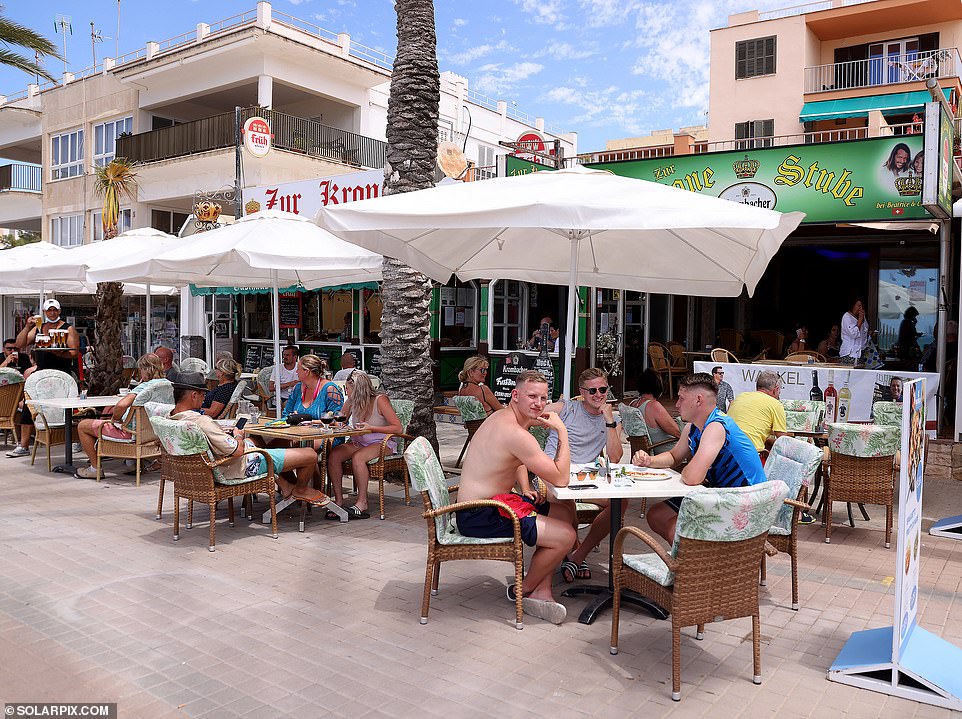 Many Germans admit they are scratching their heads over why fully-vaccinated Britons still have to quarantine for up to ten days when they go home. Pictured: Germans eating on the beach front in S’Arenal Beach today

Many traditionally Brit-popular parts of Majorca, such as Magaluf and its raucous party strip Punta Ballena, and more family-orientated resorts like Cala d’Or and Pollensa, are suffering the absence of holidaymakers from the UK.

German tourists traditionally outnumber the Brits on Majorca, especially in areas like S’Arenal, although large parts of the island and neighbouring Ibiza and Menorca are British ghettos.

The bosses of Jet2, and easyJet, whose CEO Johan Lundgren has a holiday home in Majorca, criticised the UK government last week for not putting the islands on the green travel list.

Charlie Cornish, chief executive of Manchester Airport Group, insisted the approach of EU countries was ‘more positive’, adding: ‘Hundreds of thousands of people from places like Germany are travelling freely and safely to low-risk countries.’

Garry Wilson, chief executive of easyJet Holidays told the BBC: ‘We’ve just recently added 150,000 seats from Berlin into Palma to try to meet the huge pent-up demand that has been released from those restrictions lifting.

‘It’s a shame we can’t do the same for UK customers, because we know demand is there.’

Christian Lafourcade, the Uruguayan-born owner of German-popular bar-restaurant Zur Krone overlooking S’Arenal beach, said: ‘We only closed once during the pandemic which was last year for a fortnight when we had to.

‘Our turnover was around 50 to 60 per cent what it was in 2019 but it’s definitely gone up in the last week or two with the influx of German holidaymakers. 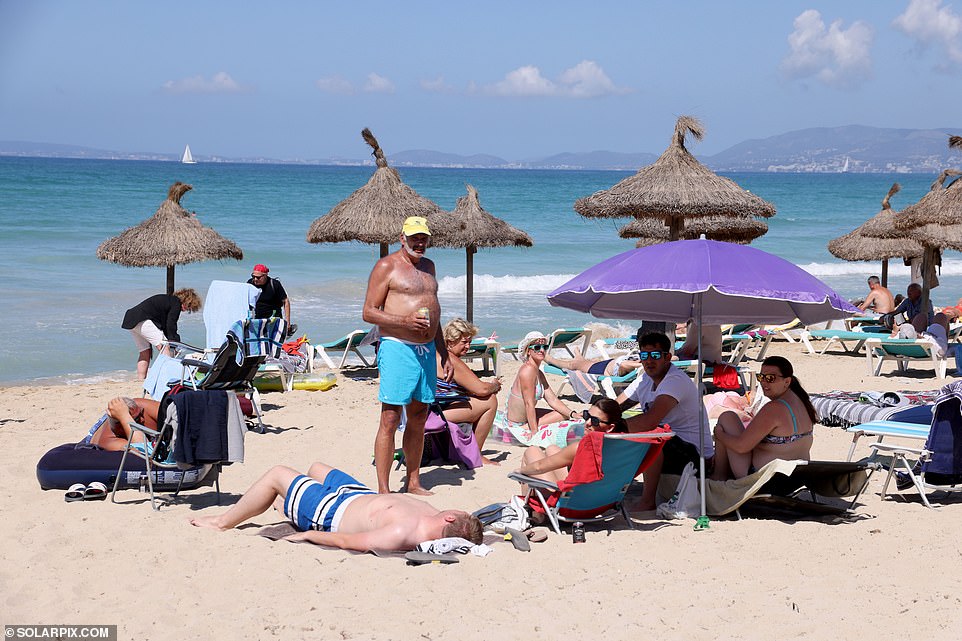 German tourists traditionally outnumber the Brits on Majorca, especially in areas like S’Arenal (pictured today), although large parts of the island and neighbouring Ibiza and Menorca are British ghettos

‘Around 90 per cent of our customers are traditionally German. We serve German beer like Krombacher and Holsch because that’s what clients want.

‘If this bar was somewhere in Magaluf, I’d probably be sitting at home right now watching the football because I’d have very little work.

‘I had two friends with bars there and they both sold at a fraction of the cost they should have got for their businesses in better times, one after laying off 22 staff and the other after laying off 12 staff.

‘That’s what happens in areas that rely on British tourism when those holidaymakers are told they have to quarantine when they return home.

‘It’s not just the tourists that lose out but the people who strive to make their holidays as special as possible while they’re here.’