Germany defeats Armenia by four in the first half of the World Cup qualifiers.. Video 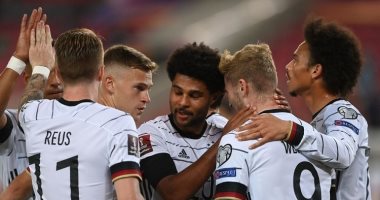 The German national team defeated its Armenian guest 4-0, at the end of the first half of the match they are currently meeting, at the Mercedes-Benz Arena in Stuttgart, as part of the fifth round of the tenth group of the European qualifiers for the 2022 World Cup.

The German team’s goals came through Bayern Munich star Serge Gnabry, two goals in the 6th and 15th minutes, and Marco Reus, the Borussia Dortmund star, added the third goal in the 35th minute, and Chelsea striker Timo Werner concluded the Manshaft quartet in the first half in the last minute.

The German national team enters the match tonight, occupying the second place in the group standings with 9 points, one point ahead of the leaders Armenia.

The German national team entered the match with the following formation:

The German national team, led by coach Hans Flick, seeks to win today’s match and grab the top spot in the group, especially after the unconvincing performance in the victory over the humble Liechtenstein team with two goals for free in the last round, in the first match of the former Bayern Munich coach, who took over The task was to replace his predecessor, Joachim Loew, following the finals of the last European Nations, “Euro 2020”.

Flick included many new faces for the German national team in the current suspension period, most notably: Karim Adeymi of Red Bull Salzburg of Austria, and David Raum, defender of Hoffenheim, while Barcelona goalkeeper Marc ter Stegen is absent from the Mannschaft; For lack of readiness after returning from injury, Real Madrid star Toni Kroos, in addition to Thomas Muller leaving the camp after suffering an injury.

When does make-up become dangerous to the health of your skin?