The South American country became the first in the world to legalise cannabis nationwide for recreational use back in 2013.

Citizens may buy cannabis plants to grow at home, buy the drug through a pharmacy, or else get their supplies by joining a growing club.

Cannabis is legal to store and smoke at home, but in order to buy it users must be registered with the government, are limited to buying four strains with low THC counts, and are limited to purchasing 10 grams per week.

While the law was passed in 2013, it took until 2017 for the government to actually licence pharmacies to sell cannabis. A survey the following year found that most users still buy from illicit dealers.

Justin Trudeau’s liberal government became the second to legalise the recreational use of cannabis nationwide in 2018.

It is currently legal for adults in Canada to possess up to 30 grams of cannabis, grow up to four plants at home for personal use, buy cannabis products from licenced stores, and make cannabis products such as edibles. 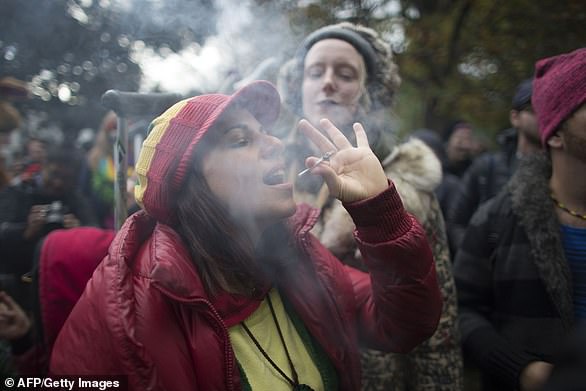 A woman smokes marijuana during a legalisation party in 2018, after Justin Trudeau’s government made recreational use of the drug legal

Between April 2019 and March 2020, the government made some $24million from taxes on cannabis products – far less than expected – but has cut costs on law enforcement, as charges for possession dropped to almost nil.

As the law stands, adults may possess and cultivate cannabis for their own personal use, provided the drug is consumed in private.

THC – the active ingredient in cannabis – is also legal, provided it takes the form of raw plant products and has not been processed.

Consumption of cannabis in public, the sale of cannabis or cannabis products, and consumption by minors is illegal and punished by up to 25 years in jail.

The recreational use of cannabis in the small, ex-Soviet country was also effectively legalised by Constitutional Court decree in 2018.

Judges ruled that the growing and use of cannabis within a person’s private property is protected under the constitution, which guarantees the ‘right to free personality’.

However, the large-scale cultivation and sale of cannabis remains illegal with law-breakers facing up  to 14 years in jail.

A 2019 Supreme Court ruling decriminalised the cultivation and consumption of cannabis at home, stating that laws banning it were unconstitutional and violated personal rights.

But the large-scale production of cannabis and commercial sale of the drug remains illegal, as is carrying more than five grams of the drug. 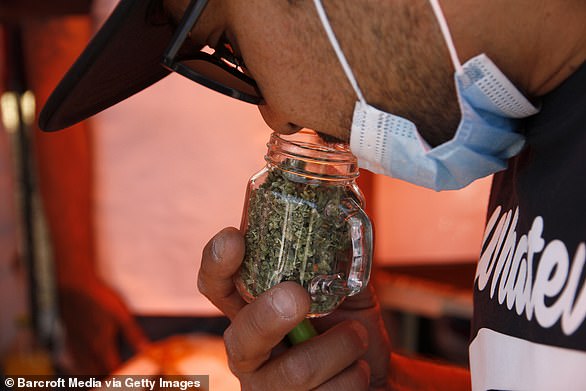 Mexico’s Supreme Court has ruled that personal cultivation and consumption of marijuana is legal, but attempts to legalise the commercial market have stalled

Lawmakers are currently working on a bill to make large-scale cultivation and commercial sale of the drug legal, while increasing possession limits to 28g.

But the law, which does not have widespread public backing, has stalled in parliament and its future remains unclear.

While illegal under federal law, some 16 US states have legalised marijuana for recreational use within their borders.

Laws vary from state, but broadly speaking users in such states are allowed to cultivate their own plants, consume cannabis within private properties and purchase the drug from licenced dispensaries.

Efforts are underway on Capitol Hill to fully legalize the drug, with rival Republican and Democrat proposals being worked on.

However, the issue is far from the top of the legislative agenda with few expecting a major change in the law any time soon.

Long associated with pot culture, the Caribbean island only decriminalised the possession of small amounts of cannabis in 2015.

Rastafarians, who believe the cannabis plant is sacred, are allowed to smoke unlimited amounts for sacramental purposes.

Other individuals are allowed to cultivate the plants at home, while smoke in private residences and licenced dispensaries is legal.

Those caught in possession of larger amounts of the drug are required to pay a fine, unless they have a medical exemption.

Known for its radical approach to drug policy, cannabis in Portugal – like all drugs – has been decriminalised since 2001 but is not legal.

In practice, that means anyone caught in possession of the drug faces no criminal penalty but will have the drug confiscated and face a range of non-criminal sanctions.

Those can range from attending rehabilitation clinics, to paying fines, or doing community service.

Despite being famous for its coffee shops, cannabis in the Netherlands is not officially legal and is merely ‘tolerated’ by the government.

Licenced shops can sell up to 5g per person per day, but are not allowed to advertise their wares or sell other intoxicants such as alcohol. 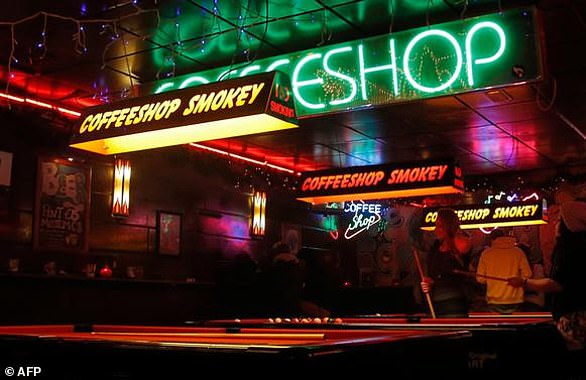 Though Amsterdam’s coffee shops are famous, cannabis is officially illegal in the Netherlands with the drug merely ‘tolerated’ by the government

They are also not supposed to sell cannabis to foreigners, but enforcement of this rule is lax with more than half of visitors to Amsterdam saying the availability of the drug was a ‘very important’ reason for their trip.

Critics say this halfway house approach has produced the worst of both worlds, attracting anti-social behaviour and drug tourism whilst also helping to fund gangs which are largely responsible for commercial cultivation.