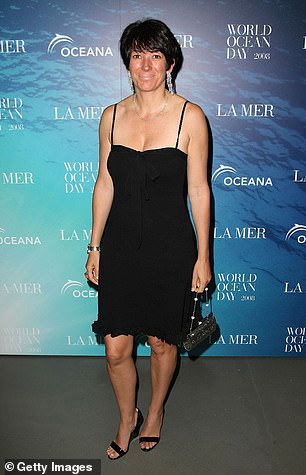 Ghislaine Maxwell (pictured in 2008) appeared to admit Jeffrey Epstein was taping his famous friends, including Donald Trump and the Clintons, during a 2016 meeting with former CBS producer Ira Rosen

Ghislaine Maxwell appeared to admit Jeffrey Epstein was taping his famous friends, including Donald Trump and the Clintons, during a 2016 meeting with former CBS producer Ira Rosen, a new book reveals.

The British socialite, who is accused of procuring underage girls for the billionaire pedophile, reportedly told Rosen she didn’t ‘know where’ such recordings were after the Emmy-winning producer asked her to hand over footage of Trump.

The conversation took place ahead of the 2016 US presidential election and Maxwell, who supported Hillary at the time, refused to help, saying: ‘If you get the tapes on Trump you have to do [Bill] Clinton’.

The anecdote is included in Rosen’s new book, Ticking Clock: Behind the Scenes at 60 Minutes, released Tuesday, in which he dishes about his time working at the investigative show.

The book sheds new light on reported claims that Epstein had secretly recorded his celebrity friends having sex with women and underage girls at his home – and then used the footage to blackmail them.

Two of Epstein’s victims, Maria Farmer and Virginia Roberts Giuffre, have previously claimed that they saw a room full of CCTV monitors in a room at his $65million mansion in New York – with some cameras installed in the bathrooms.

In his memoir, Rosen reveals he arranged a meeting with Maxwell in early 2016, and acting on ‘hunch’ that the tapes existed, tricked her into confirming they did.

Rosen recalled their meeting in his new book, Ticking Clock: Behind the Scenes at 60 Minutes , released Tuesday, in which he dishes about his time working at the investigative show

Rosen said Maxwell did not deny the existence of the tapes when he told her to hand over footage of Donald Trump at Epstein’s home. Trump (pictured with Epstein in Mar-a-Lago in 1992)

The British socialite (pictured with Bill Clinton on Epstein’s ‘Lolita Express’ in 2002) suggested there were also tapes of Clinton, but claimed Epstein never told her where they were located

Maxwell replied: ‘I don’t know where they are.’

Rosen writes he told her to ‘ask Epstein’, adding that the ‘fate of the country is at stake.’

‘Trump could be elected president and how would you feel if those tapes emerged after he was in office?’ Rosen asked Maxwell.

‘She gave me a stern look and pointed a finger in my face. She said: “I am the daughter of a press baron. I know the way you people think. If you do one side, you must do the other. If you get the tapes on Trump you have to do Clinton”.’

Rosen replied: ‘I will. I will go wherever the story goes.’

According to Maxwell, however, Epstein, allegedly never told her of the whereabouts of the tapes, Rosen writes.

‘Maxwell didn’t want Trump elected, but said that Hillary Clinton was comfortably ahead and there was no need for the story to come out.

‘Besides, she said, Epstein never shared with her the location of the tapes.’

Flight logs have revealed that Bill Clinton took at least 26 flights on Epstein’s private jet, known as the ‘Lolita Express’, and photos published by DailyMail.com have shown him getting a massage while on board from a young Epstein victim.

Reports have claimed that Clinton also went to Epstein’s island in the Caribbean but he has denied this and always claimed he flew on the plane through his work at the Clinton Foundation.

Maxwell claimed she didn’t know where Epstein’s tapes of Donald Trump were. Trump has confirmed he was previously friends with the billionaire financier (pictured in 2000)

The former president once said Epstein liked women ‘on the younger side’. The pair are pictured together in Palm Beach, Florida in 1997

Trump and Epstein were also friends for years and partied together in Florida, with the former president once saying that the pedophile liked women on the ‘younger side’.

At the end of the night, Rosen says he hailed Maxwell a taxi and she asked if he was going back to her place.

‘Get me the tapes and I will go back to your place,’ he replied, but Maxwell gave him a kiss on the cheek and left.

Rosen writes that he thinks that wealthy men in Palm Beach invested with Epstein ‘after being extorted with pictures from nights of debauchery’.

The encounter was his second meeting with Maxwell.

Rosen writes that he also saw Maxwell at a book party at the Four Seasons Hotel in New York in 2014 – after she met her future husband Scott Borgerson – and that she had approached him wearing a ‘sexy red dress’ and asked for a ride home.

‘Once there she turned to me in the front seat with an offer. “If you come in and f**k me I will tell you the secrets of my father”,’ Maxwell said, Rosen writes.

Maxwell was referring to Robert Maxwell, the disgraced British newspaper tycoon who was rumored to have been an Israeli intelligence agent and died under mysterious circumstances on his yacht in the Canary Islands in 1991.

‘I was stunned and speechless, my mind racing. I was not about to sleep with her but the reporter in me still wondered if her information would make a good 60 Minutes piece,’ he added.

Rosen said he told Maxwell: ‘What a great offer but I left my dog home alone and I really need to get back to her’.

Two of Epstein’s victims, Maria Farmer and Virginia Roberts Giuffre (pictured) have claimed Epstein had been recording his famous friends at his mansions

‘It was a lame excuse and she knew it – she smiled weakly and said goodnight.’

Among those who have claimed that there were secret recordings in Epstein’s properties is David Boies, a lawyer who represents a number of his victims.

He has said that Britain’s Prince Andrew and other powerful men appear in CCTV footage recorded at Jeffrey Epstein’s properties.

The pedophile has surveillance system at his homes in New York and Palm Beach and Andrew would have featured on the ‘very large quantity of tapes’.

Maxwell,  is currently being held at the Metropolitan Detention Center in Brooklyn as she awaits trial on child sex trafficking charges.

In a letter to Judge Alison Nathan on Tuesday, Maxwell’s attorney Bobbi Sternheim complained about the ‘onerous’ conditions her client is allegedly being subjected to in prison, claiming she is ‘withering away’ and losing her hair.

Such treatment is purported to include being deprived of sleep, being given inedible food, being ‘physically abused’ by a jail guard – and later being punished for complaining about it.

‘It is impossible to overstate the deleterious effect of the conditions under which Ms. Maxwell is detained,’ Sternheim wrote.

‘She is withering to a shell of her former self — losing weight, losing hair, and losing her ability to concentrate.’

The lawyer’s letter states that Maxwell is subject to constant searches and surveillance by guards, which Sternheim claims is to make up for the Bureau of Prison’s failure to prevent her alleged cohort, Epstein, from killing himself in 2019.

‘Ms. Maxwell continues to be at the mercy of a revolving group of security officers who are used to guarding hundreds of inmates but now focus their undivided attention exclusively on one respectful, middle-aged female pretrial detainee,’ Sternheim wrote.

The attorney further claimed that recently – and out of view of the surveillance cameras in her isolation cell – Maxwell was ‘physically abused’ by a guard during a pat down search.

‘When [Maxwell] asked that the camera be used to capture the occurrence, a guard replied ‘no.’, Sternheim claimed. ‘When Ms. Maxwell recoiled in pain and when she said she would report the mistreatment, she was threatened with disciplinary action.’

Days later, in response to her complaints, Maxwell was then allegedly ordered into a shower by guards and told to clean, sanitize, and scrub the walls with a broom.

She once again requested for the encounter to be recorded but was allegedly denied, Sternheim said.

Sternheim went on to claim that surveillance of her client is so strict that ‘guards forbid’ Maxwell from standing in certain areas of her six-foot-by-nine-foot cell, including telling her not to stand to the left or right over her toilet.

Maxwell’s trial will begin in July on charges that she recruited three teenage girls for Epstein to sexually abuse in the 1990s and committed perjury during 2016 depositions in a civil case.

She was arrested in July 2020 following a worldwide search and has pleaded not guilty to all charges.

She has remained incarcerated without bail since July, when she was arrested almost exactly a year after Epstein was arrested to face sex trafficking charges. Epstein killed himself in a Manhattan jail a month after his arrest.

In late December, a judge rejected a $28.5 million bail proposal for Maxwell, saying she was a risk to flee and was not forthcoming with authorities about her finances after her arrest.

As part of the bail proposal, lawyers said Maxwell had about $22.5 million in assets with her husband and had set aside over $7 million for her defense.

15 things from QVC that can help you organize your home

15 things from QVC that can help you organize your home