A giant European dormouse has been spotted in England for the first time, prompting fears that the predatory rodent could threaten our native dormouse species.

Sean Foote, a Wiltshire-wildlife writer and moth expert, was left ‘confused’ after finding the injured garden dormouse during an outing near Fordingbridge, Hampshire, in the New Forest.

Experts cannot explain where the specimen came from, although it’s possible it escaped from a private local breeder.

Reaching about 6.8 inches in length, the garden dormouse (eliomys quercinus) has a distinctive black ‘mask’ across its eyes, as if ‘dressed like a bandit’.

But despite its cute appearance, the garden dormouse is omnivorous, feeding on the young of newly born rodents and birds as well as seeds and berries. 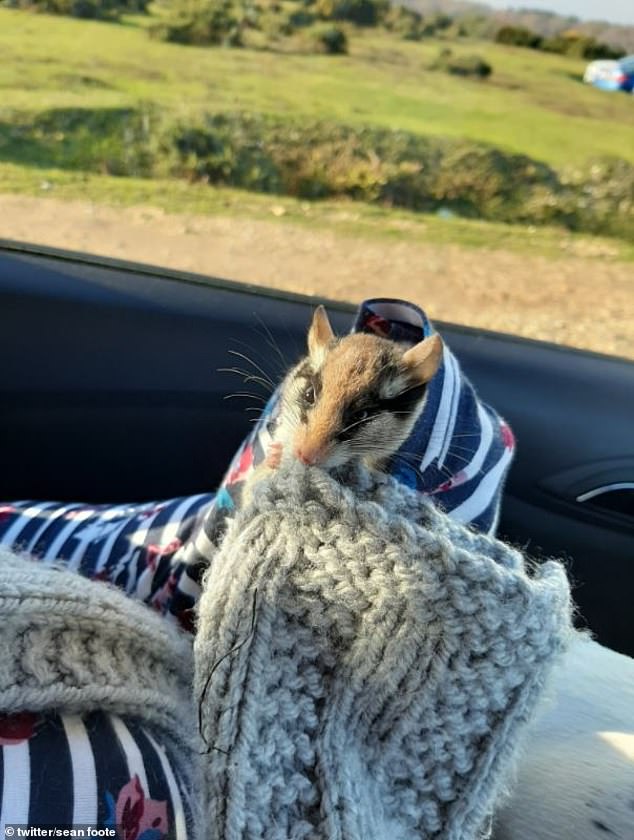 Sean Foote, found the content-looking specimen near Fordingbridge, Hampshire, in the New Forest and wrapped it in a scarf

Garden dormice are ‘quite carnivorous in summer’ and could feed on the young of our native hazel dormice, according to environmental scientists.

In the UK, garden dormice are bred in captivity and can be bought as pets from select breeders, leading experts to believe this particular critter may have been accidentally let out of its cage.

Experts aren’t aware of any wild garden dormice in the UK, except for a couple of sightings in Derbyshire in October.

Foote took to Twitter to share a photo of the garden dormouse, which he had wrapped in a scarf and is now nursing back to health before deciding what to do with it.

‘Really confused about this. Just found this injured garden dormouse in the New Forest!,’ Foot tweeted.

‘Isn’t supposed to occur in the UK – on the near continent, but…surely an escape?’

Foote took it home and is keeping it in a cage for the time being, where it slept for a whole day. 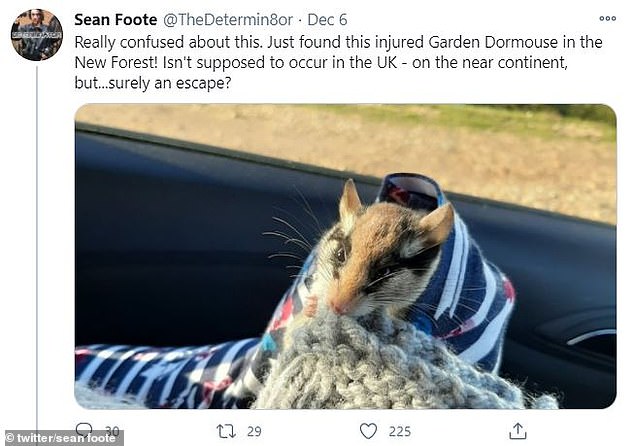 The injured dormouse appears to be making a recovery. Foote is still considering what to do with the specimen when it’s back to full health

‘It immediately burrowed in bottom of its cage when we put it in yesterday, and stayed there sleeping for 24 hours or so,’ Foote said.

‘Has become more active in last couple of hours though. Thinking on our next move.’

The specimen was found in the spot of the New Forest that’s far away from any houses or built-up areas, fuelling speculation that someone went into the heart of the forest to deliberately give it its freedom.

Francis Buner, senior conservation scientist at Game & Wildlife Conservation Trust, tweeted: ‘If you found it in the middle of the park a good distance from any habitation, I doubt it can have escaped.

‘Some idiot must have released it I should imagine.’ 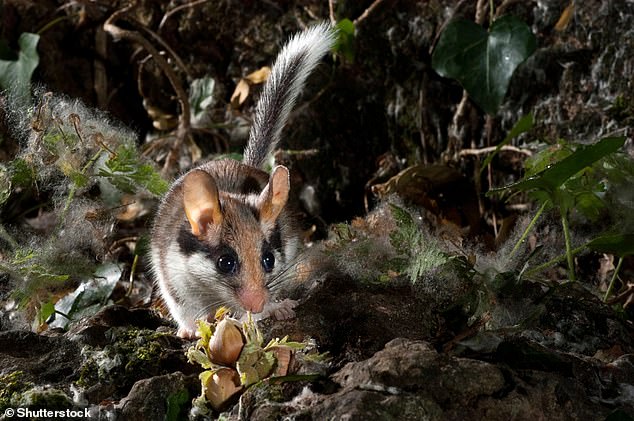 The non-native garden dormouse. The species has a grey or brown coat with a white underbelly and distinctive black eye markings, as if it’s ‘dressed like a bandit’

It’s also possible the specimen was carried across the English channel on a commercial ship from mainland Europe – a ‘stowaway on [a] ship into Portsmouth’, as one Twitter user suggested, which Foote admitted was possible.

The garden dormouse has grey or brown coat with a white underbelly, distinctive black eye markings, relatively large ears, short hair, and a white tassel at the end of the tail.

It lives in steepe deserts, hollow trees, rock crevices, and human dwellings and are occasionally found in swamplands.

‘They have a broader tolerance of habitats than the other dormice we have,’ said Rob Edwards, a London-based botanist and environmental scientist.

‘Quite carnivorous in summer. I think they would be used to martens, pine or beech as predators.’ 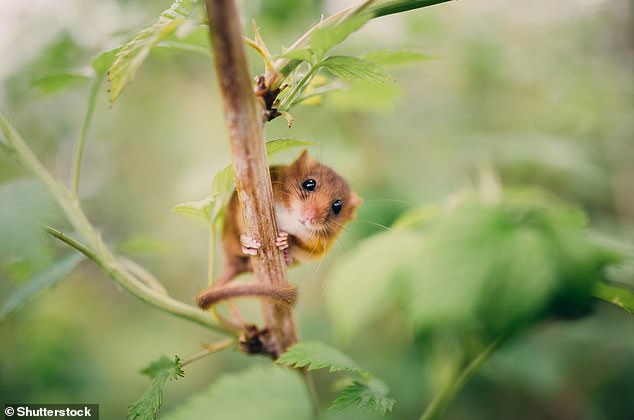 In October this year, a dead garden dormouse was found in Derby alongside a dead pet rabbit.

It was unclear whether the dormouse was responsible for the death of the rabbit or vice versa.

At the time, ecologist Tom Martin said: ‘They occur across a lot of continental Europe but I’ve never heard of them being feral in the UK.

‘Seems you can buy them as pets though, so an escaped pet seems to most likely possibility.’

This is not the first garden dormouse found in Britain, according to the Mammal Society.

Fiona Mathews, chair of the Mammal Society, told MailOnline that six garden dormice were killed by a cat in Dover in 1991.

Remains of garden dormice were also found in York in 1986 and in South Shields in 1994.

It is possible the Romans imported the species to Britain from the French coast as a food source and they subsequently went extinct.

Department for Environment, Food and Rural Affairs (Defra) told MailOnline that the garden dormouse does ‘not to pose a significant risk to the UK’.

‘There have been previous reports of this species in the UK, presumed to be from accidental releases,’ a Defra spokesperson said.

‘However there is no evidence to show they have been able to breed in the wild.

‘Minimal environmental harm by the garden dormouse has been reported.’

The garden dormouse should not be confused with the edible dormouse or fat dormouse (glis glis) – an invasive European species that was accidentally introduced to the UK in 1902, to Tring in Hertfordshire, England. 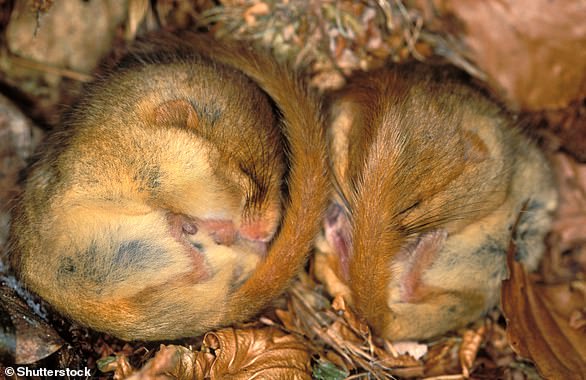 Two cute hazel dormice in hibernation. After gathering up their fat reserves in autumn, hazel dormice will begin hibernation in winter. As the weather turns cooler they will move down from the trees to ground level, creating a tightly woven nest around the size of a tennis ball. They will curl up in this ball with their tail wrapped around their face and body to keep warm

Numbers of the hazel dormouse, otherwise known as the common dormouse, are dwindling.

Since the turn of the century, numbers of hazel dormice have decreased by more than a third up to 2016.

Experts believe the tiny mammal is under threat as a result of a loss of habitat, changes to how woodland and countryside are managed, and climate change.

Hazel dormice were once widespread in England and Wales, but have disappeared from 17 counties since Victorian times.

Now they are only commonly found in the South of England and areas of the English-Welsh border.

Numbers have fallen by 38 per cent since 2000, according to the State Of Britain’s Dormice report from the People’s Trust for Endangered Species (PTES).

The current rate of decline is equivalent to a fall of 55 per cent over 25 years, the report said.

Hazel dormice can occasionally be spotted scampering across the countryside in search of food.

They live in woodland, hedgerows and dense shrub and can spend their entire lives up in the branches without ever touching the ground.

It builds summer nests of stripped honeysuckle bark in which the female will give birth to up to seven young.

They hibernate during the winter months, in a dense nest built in a tree cavity or similar, sheltered place, and curl up into a cute ball.

Dormice thrive in in shrubby habitat and brambles, and use hedgerows to move about the countryside.

One of the biggest threats to the tiny animals is a lack of management of woods, which is leaving trees unruly and isolated.

They have also been hit by more intensive agriculture, which has led to the loss of hedgerows and ‘flail cutting’ which reduces suitable habitat.

Ian White, dormouse officer at PTES said: ‘Woodlands in the landscape are becoming increasingly isolated. Dormice need the hedgerows to get around.

‘The problem within our fragmented landscape is where dormice have become locally extinct within a woodland, without a hedgerow network it is difficult for them to get back there.’

Mr White added that climate change was also having an impact on the mammals, which hibernate in winter.

Hazel dormice, their breeding sites and resting places are protected by UK law.

The UK government says: ‘You may be able to get a licence from Natural England if you can’t avoid disturbing them or damaging their habitats.’