NYPD officers were heckled for arresting five organized anti-vax mandate protesters and detaining a nine year-old girl Wednesday after they barged into the Natural History Museum without showing proof of COVID vaccination.

The arrests, which come amid soaring crime in the Big Apple, took place on Wednesday. Trouble began when a half-dozen purported members of the New York Freedom Rally – a group that has been staging anti-vax protests throughout the city – attempted to enter the Manhattan museum without showing their vaccine passports in violation of rules. Those require every visitor five years and older to show proof of vaccination.

The nine year-old, named Jayla, was filmed sobbing as she was marched down the steps by two cops, with onlookers filmed heckling and abusing the NYPD officers over her apprehension. She and her unnamed mom were taken to a nearby precinct, and released two hours later. It is unclear if the youngster’s mom will be charged.

The protest was documented by a Twitter user describing himself as an ‘independent journalist’ reporting on the anti-mandate movement in New York City. 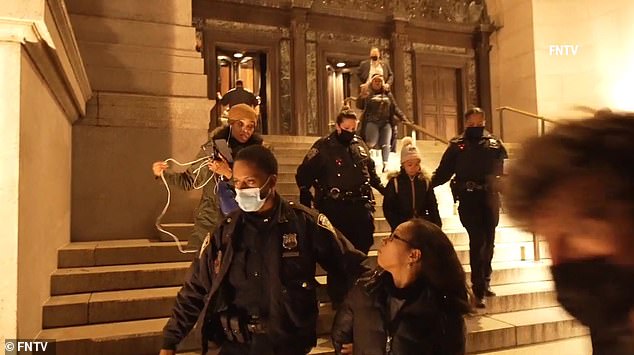 A group of anti-vax activists staged a protest at the American Museum of Natural History in Manhattan on Wednesday, leading to arrests 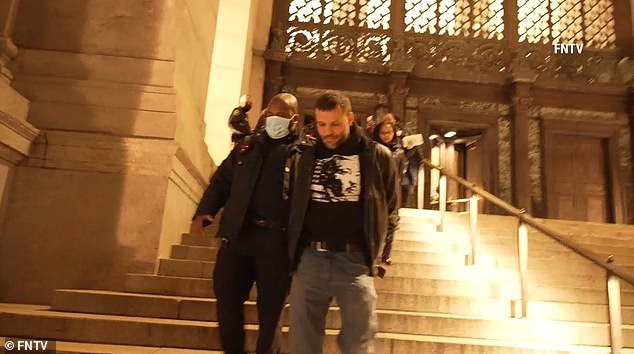 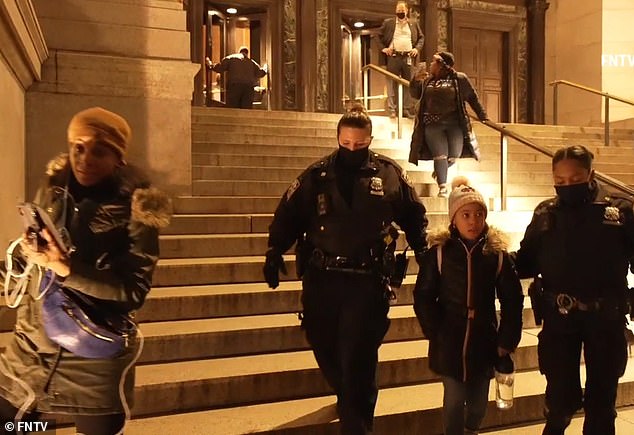 A 9-year-old girl named Jayla was escorted out of the museum by police officers, who also arrested her mother 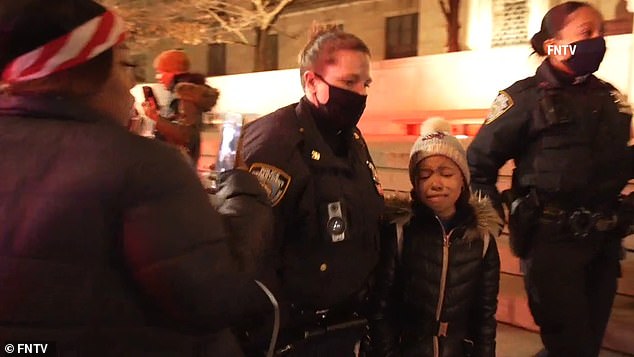 The child was in tears, and one bystander admonished the police for ‘traumatizing’ her 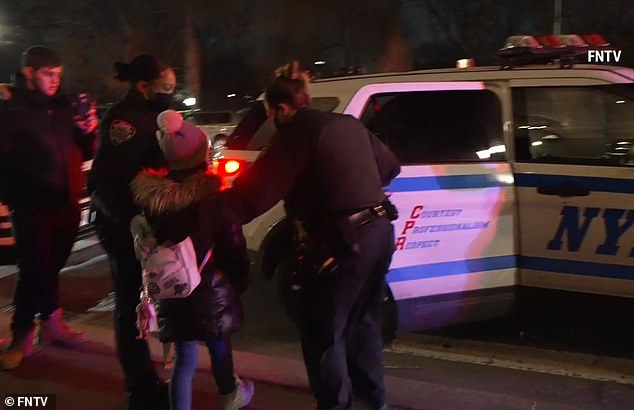 Jayla was not arrested but held by the police. She was filmed by onlookers crying while being led away by cops

Last Saturday, Deloitte worker Michelle Go, 42, was pushed to hear death under a subway train at Times Square Station. Homeless ex-con Simon Martial has been charged with her murder.

And on Wednesday, 11 month-old Catherine Gomez was shot in the face in the Bronx while she sat in a parked car next to her mom Miraida Gomez, 32.

The baby – who celebrates her first birthday on Friday – was struck by a gunman who fired wildly while chasing an assailant. No arrests have been made.

Overall crimes are up by 20 per cent compared to the same period in 2021, with the arrest of the anti-mandate protesters sparking further concerns of the NYPD’s valuable resources being wasted tackling petty crime.

One of the videos showed the adults and child, identified as a nine-year-old girl named Jayla, being escorted out of the museum by uniformed NYPD officers.

Group of onlookers are heard hurling profanities at the officers as the lead the weeping girl to an awaiting police vehicle.

Twitter user Luke2Freedom, who recorded the arrests, claimed that the five adults, among them Jayla’s mother, were arrested, while the nine-year-old was held until her parent’s release two hours later.

As of Friday morning, neither the NYPD not the American Museum of Natural History has not confirmed the incident to DailyMail.com.

The six anti-mandate activists affiliated with the New York Freedom Rally had made reservations to visit the museum on Wednesday, but were denied entry after failing to produce their COVID vaccine passports. 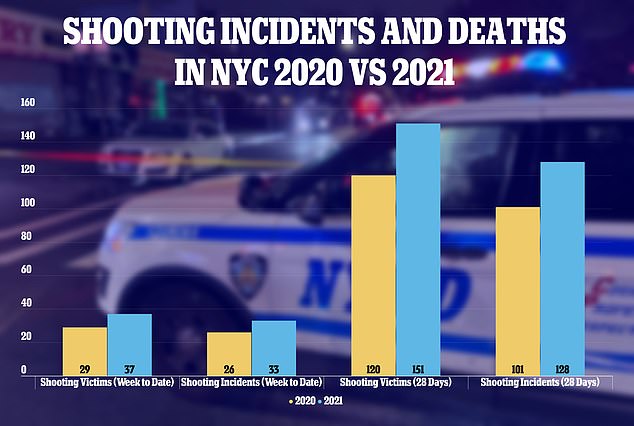 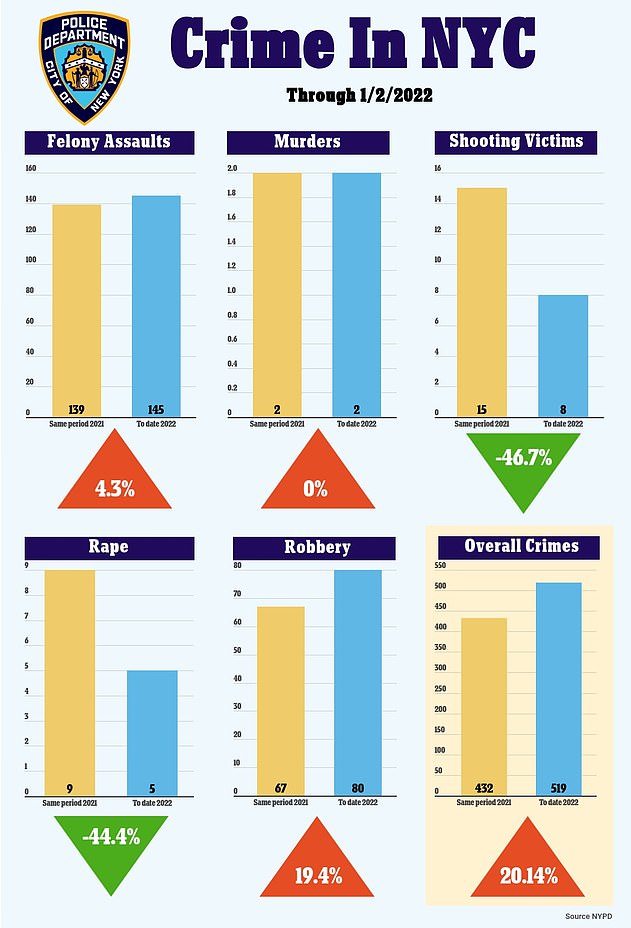 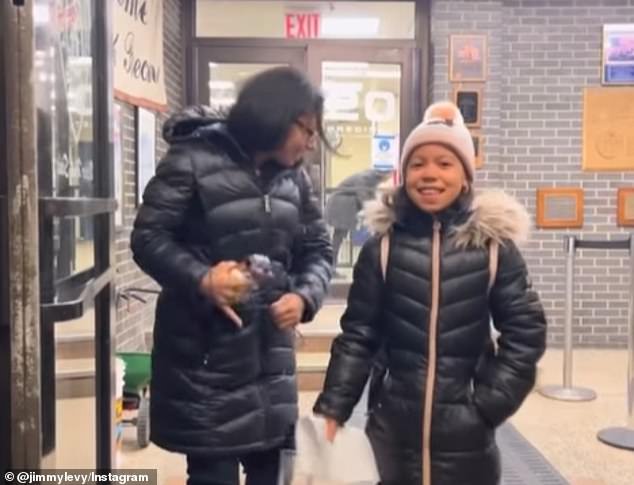 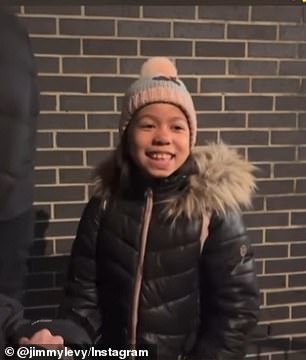 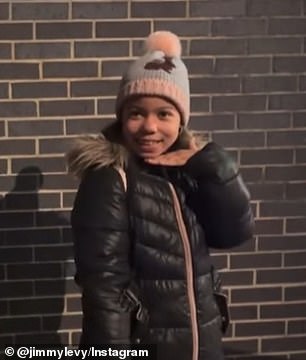 The girl was greeted by cheering supporters, who praised her as a ‘little warrior.’ Jayla appeared to be in good spirits upon her release from NYPD custody

An argument with security and museum officials ensued and quickly escalated, even briefly turning into a shoving match, after one of the women in the group, Joy, was denied access to a bathroom, despite telling staff she was on her period.

Protester Mitchell Bosch, who has gained notoriety by taking part in several recent anti-mandate stunts throughout the city, came to Joy’s defense, yelling at the guards: ‘I’ll take on all of you! You’ll have to drag me out.’

Bosch later laid down on the floor and presented museum staffers with an ultimatum: either they let him and the group visit the museum, ‘or you call the police. That is the line. There is no negotiating.’

NYPD officers were called to the scene and removed the protesters from the museum.

Video shows the men, women and 9-year-old Jayla being escorted by cops, who are heckled by bystanders and slammed as ‘f***ing cowards.’

One onlooker could be heard in the background telling the police officers that they are ‘traumatizing a little child.’

Another video that was shared on Instagram by former American Idol contestant Jimmy Levy showed a smiling Jayla emerging from the 20th Precinct, accompanied by her mother following her release from custody.

The mother and daughter received a hero’s welcome from their cheering supporters, who called the beaming 9-year-old ‘a little warrior.’

It is unclear at this time what charges the adult protestors were facing in connection with the museum stunt.

Since the vaccine mandate went into effect in New York City last year, there has been a string of anti-mandate protests involving activists going into businesses without vaccination cards, refusing to leave and, in some cases, getting arrested.

Last week, four people were arrested after taking part in an anti-vax mandate sit-in at an Olive Garden in Times Square.

In late December, unmasked protesters, which included the 41-year-old Bosch, barged into a Burger King in Brooklyn and were filmed yelling at staffers for refusing to serve them. When they would not leave, police were called to the scene and arrested five people.

Two weeks earlier, Bosch was among a large gaggle of anti-mandate activists who were busted on criminal trespass charges after causing a commotions at a Cheesecake Factory restaurant in Queens.

Bosch, whose infant daughter was present during the raucous protest, described the vaccine mandates as ‘unconstitutional and unpatriotic’.

‘We cannot stop the economy and human society based off of this. This is illogical and in my opinion, immoral,’ he said at the time.

A day after the Cheesecake Factory stunt, a group of demonstrators, which included a mother and her young son, refused to leave an Applebee’s in Queens. Police were called to eject the protestors, four of whom were arrested.