Girl, six, who wouldn’t look in the mirror due to a birthmark on her face now inspiring others

The mother of a young girl born with a large haemangioma birthmark on her face has revealed how her daughter was once so upset by her reflection that she refused to look in the mirror.

Rose Vasconcelos Esteves, 36, and husband Leonan, 38, from Rio de Janeiro, Brazil, say their daughter Vitória, six, would shy away from looking at her face after realising she looked different to her sister Alice, four, and the rest of her family.

Physiotherapist Rose says that although the birthmark has never hindered Vitória physically in her day-to-day life, she was desparate to find a way to boost the little girl’s self-confidence. 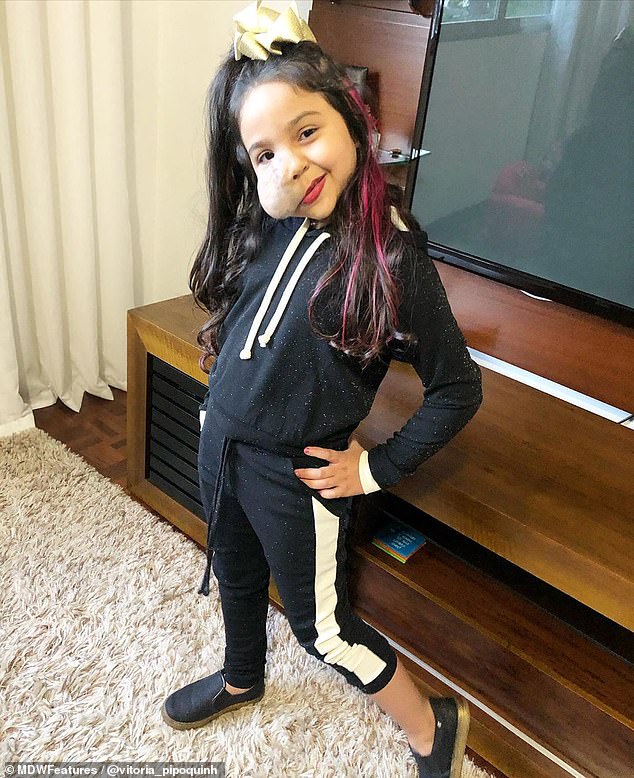 Vitória Vasconcelos Esteves, pictured, was born with a birthmark called a haemangioma on her face, and has struggled with her confidence from the age of four as a result 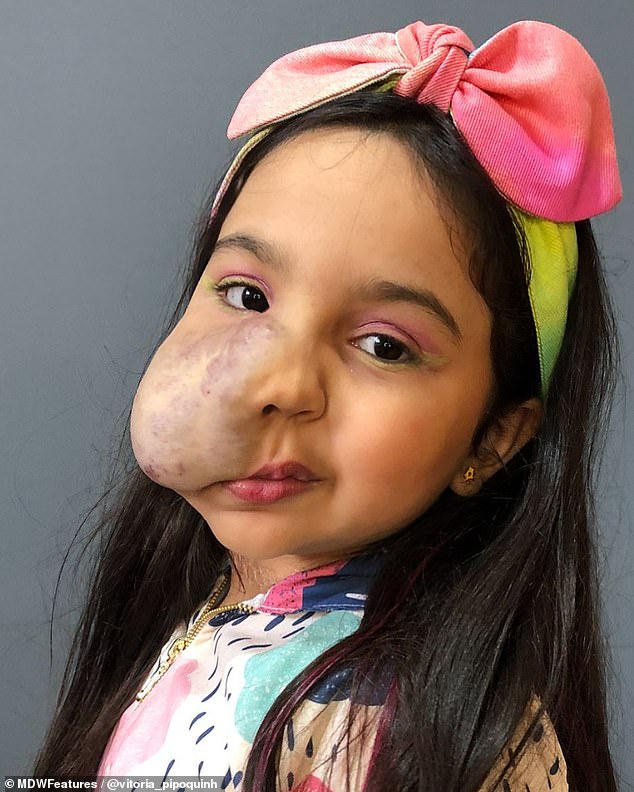 The little girl, from Rio Janeiro, Brazil, was once so unhappy with how she looked that she refused to glance at her reflection in the mirror. Now, her mother Rose says she’s inspiring people with self-esteem issues with her empowering Instagram poses 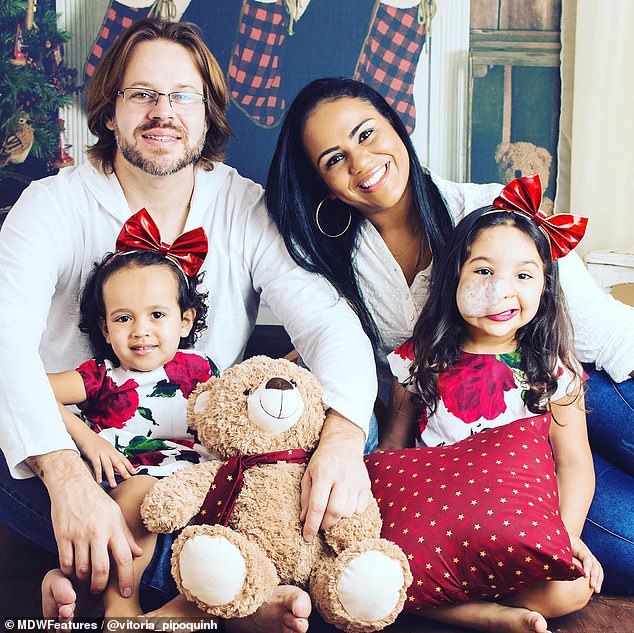 In a bid to build up her confidence and noticing her love for photography, her mother Rose started getting Vitoria to pose for pictures which she posted on Instragram. Pictured: Leonan and Rose Esteves with their daughter’s Alice, left, and Vitoria, right 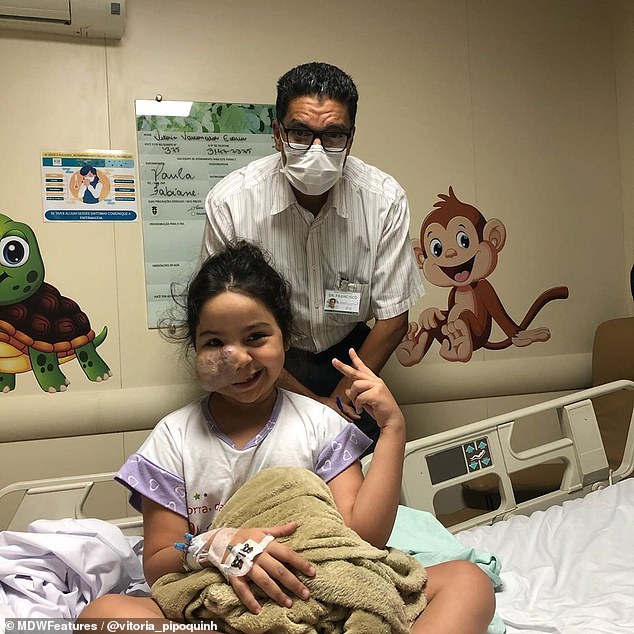 To stop her birthmark from growing, Vitoria has to have embolisation treatments every few months, pictured on one of her treatment days, but thankfully her condition does not cause her any pain

After noticing that her daughter was showing an increasing interest in photography, Rose set up fun photoshoots to try to build up Vitória’s confidence.

Enjoying dressing up in fashionable clothes, styling her hair and putting on make-up, Vitória’s self-esteem issues began to fade and, in November 2019, Rose made the decision to start posting these pictures on Instagram to build her daughter’s confidence further.

Strangers from all over the world comment on how amazing the six-year-old looks and what an inspiration she is to others suffering from self-esteem issues.

Rose says that the most rewarding comments are from adults who also have hemangioma.

However, Rose does admit that she and her husband have been accused of using their daughter’s disability to make money, something she says has never been her goal and led to her almost quitting Instagram forever. 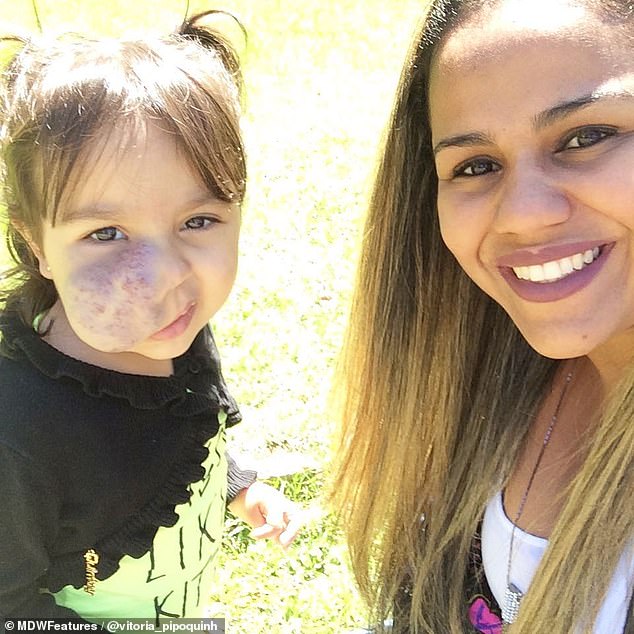 Vitoria’s mother Rose posts pictures of her daughter to raise awareness about her condition and to help build her confidence, she says…but the family have been accused of trying to ‘cash in’ on her daughter’s condition Pictured, Vitoria and Rose together 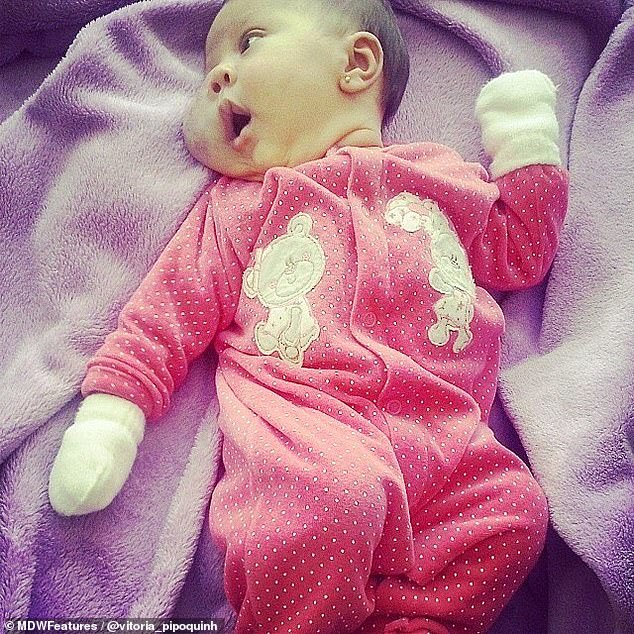 The youngster’s parents and doctors did not know about her birthmark, called a haemangioma, on her face, before she was born. Pictured, Vitoria as a baby

‘Vitória has always been full of surprises’, said Rose. ‘Her haemangioma was a surprise to us and the entire medical team at the birth. Luckily, the haemangioma does not hinder her at all in day-to-day life and it is only aesthetic.

‘She leads a normal life but of course we have to be careful that she doesn’t fall or hit her face, as this would cause considerable damage.

‘Other than that, Vitória is a super healthy child and does not feel any pain in the hemangioma.

‘From a young age she had some problems with her self-image and didn’t want her picture taken or to see herself in the mirror.’ 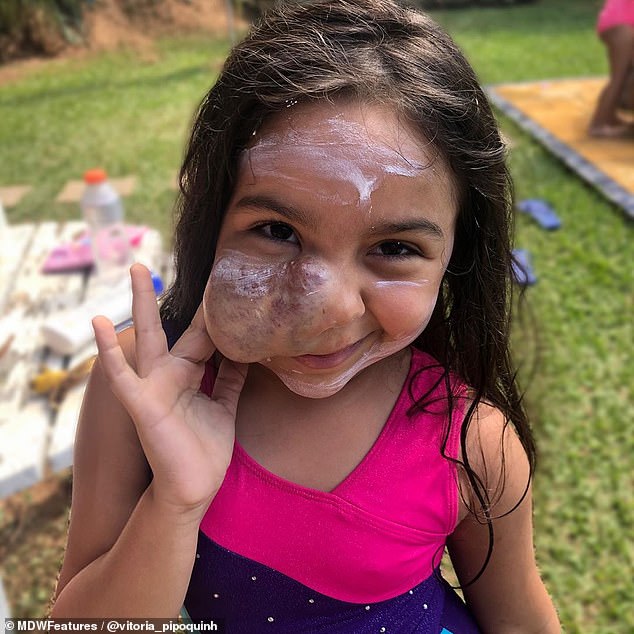 Although the birthmark does not cause her any pain, the six year old, pictured, has to be careful when playing because if she hit her face she could cause considerable damage 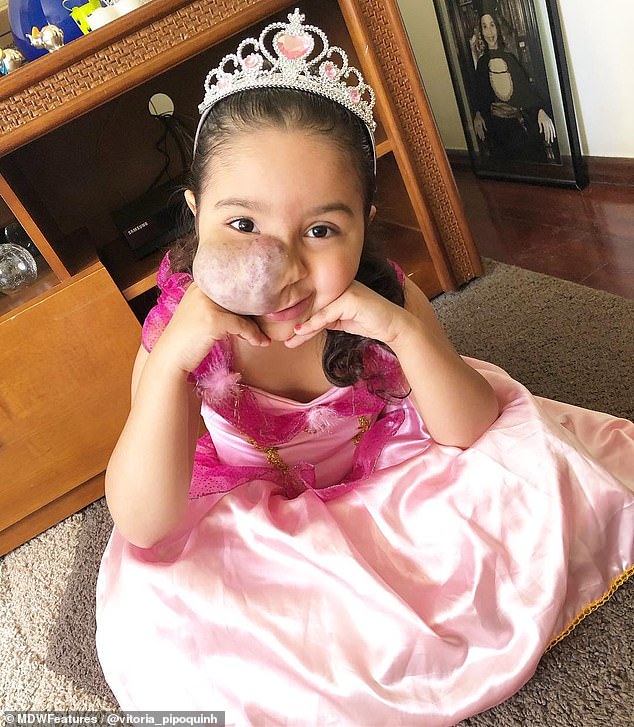 From the age of four, realising she looked different from her younger sister Alice, Vitoria refused to look in the mirror due to the birthmark on her face. Pictured, Vitoria poses for pictures dressed a princess

‘She always said she wanted to be like her sister and not have a haemangioma.

‘I decided to expose Vitória’s life on Instagram because we saw that she loved photography and taking pictures.

‘As a mother I thought it would help her self-esteem and luckily that is what has happened. Victoria is much more sure of herself which is amazing.

‘The coolest comments we get are from people who also have a haemangioma similar to hers. 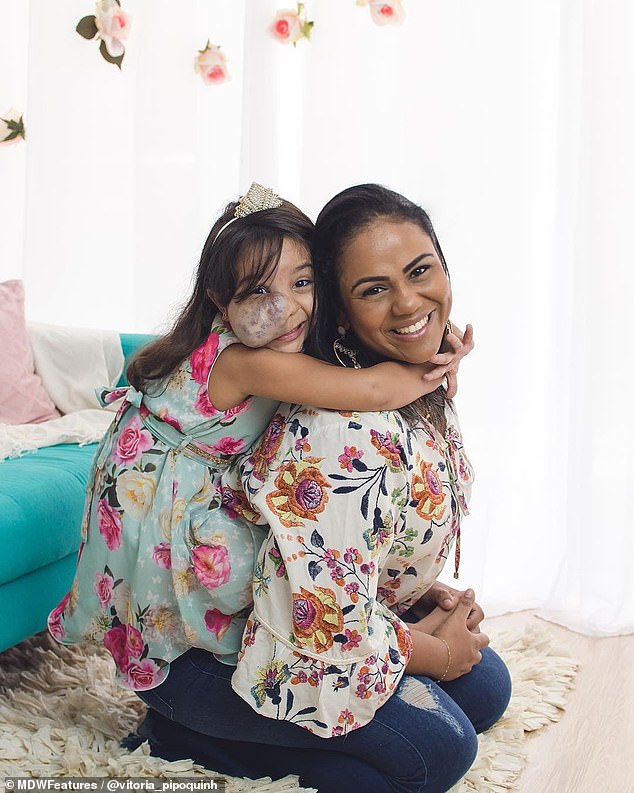 Vitoria’s mother, pictured with the six year old, spoke of the heartbreak she felt when people on social media accused her of using her daughter’s disability to make money

Whilst Vitória’s condition doesn’t cause her pain, she does undergo embolization treatments every few months which aim to decrease the amount of blood that goes to the hemangioma to prevent it growing.

The family hope that in the near future Vitória will be able to have surgery to get the tumour removed.

‘It’s amazing to hear people say that their lives changed after knowing Vitória and that they now feel more confident in exposing themselves to the world instead of hiding away.’

She adds that trolls have targeted the family: ‘I was once told that I made money from my daughter’s disability. My world came crashing down when I read that comment. I wanted to drop everything and quit social media because that has never been my goal.

‘But when I told our fans on Instagram about this comment, they encouraged us to carry on going, so that’s what we have done.We offer love, because that is what we have to give.’ 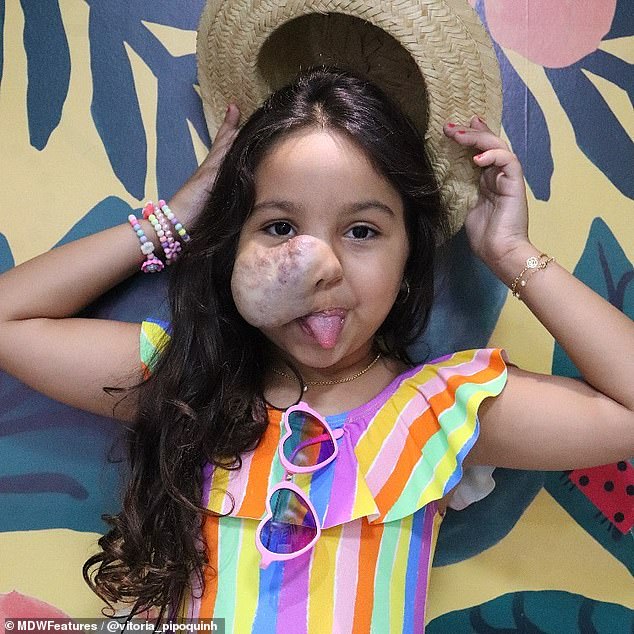 After trolls accused Rose of using her daughter’s disability to her advantage, she considered quitting Instagram completely but stayed after Vitoria’s (pictured) fans told them to ignore the hate

Rose and Leonan’s primary wish for Vitória resembles that of almost all parents universally – that their daughter is happy and healthy.

With the amazing support she receives online and the continued treatment she is currently receiving, Rose is confident that her hopes for her daughter will come true.

‘Vitória’s current treatment involves embolizations that aim to decrease the amount of blood reaching the haemangioma and then at some point she must undergo surgery to remove the tumour. 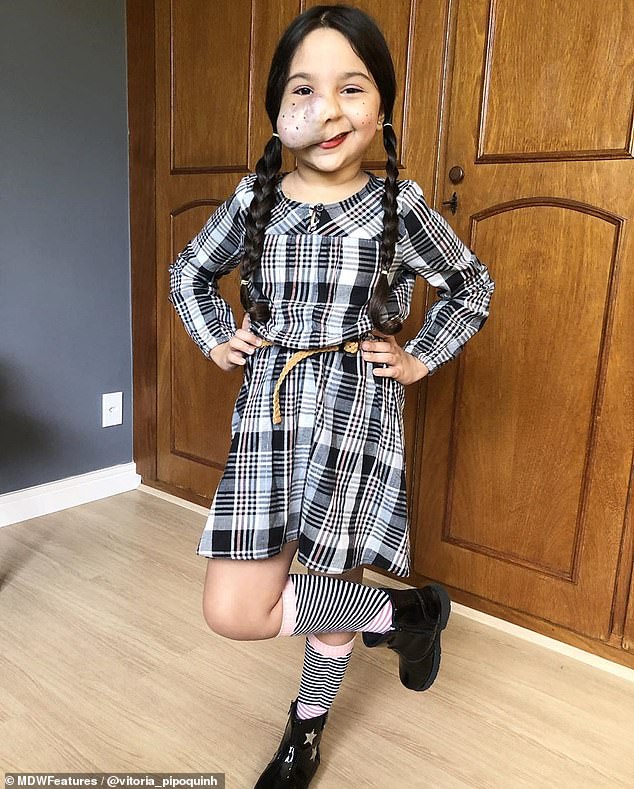 Vitoria’s confidence has grown immensely since she began posing for photographs and she has inspired others to feel comfortable in their own skin too. Pictured, Vitoria wearing a dress and pigtails

‘The only thing I wish for my daughter is that she is happy and that she is very healthy. Everything else is secondary to these two things.

‘She has such an incredible father. He’s always by our side and gives us strength every day despite the challenges we face.

‘The best thing about being Vitória’s mother is that it has made me a better person, something I never thought could happen. It brings light to my life.’