Two women who claim they discovered they had been dating the same man for eight months got their revenge by luring him to Turkey ‘for a holiday’ – but ditched him once they landed and enjoyed the trip together themselves.

Kristen Bishop, 33, from Houston, Texas, says she received a voicemail at the end of March from a stranger, Sophie Miller, who revealed she had also been dating her boyfriend Adam [not his real name], 34, for their entire eight-month relationship.

She initially refused to believe Sophie’s revelation, but after the pair reportedly FaceTimed while Sophie, 26, was inside Adam’s apartment, they began to plot their revenge on the ‘cheating’ boyfriend. 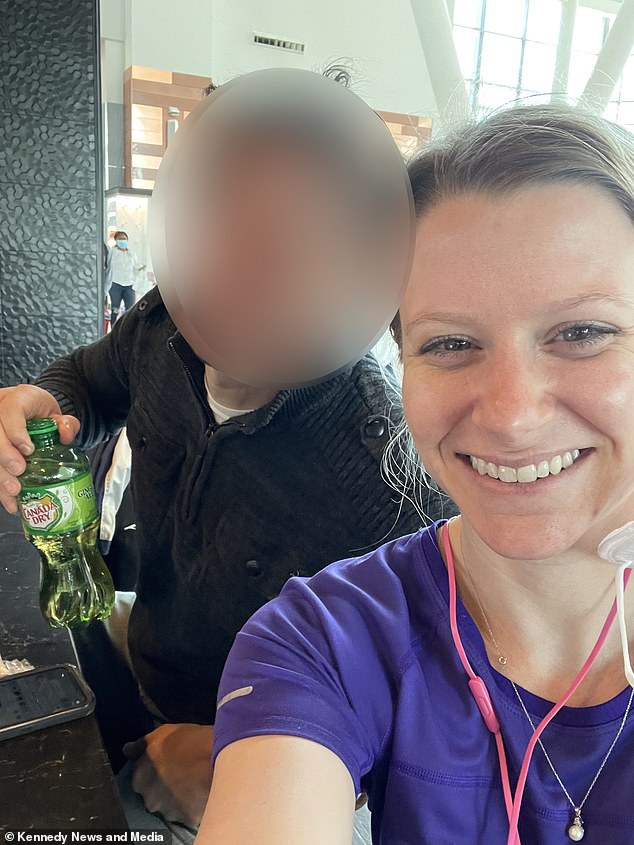 Kristen Bishop, 33, from Texas, started dating Adam, 34, in August 2020 (pictured together on their way to Turkey to be confronted by his other girlfriend) after meeting on Hinge

The duo plotted the ultimate revenge using an eight-day break in Istanbul that Kristen and Adam had planned.

Kristen revealed to Adam she knew what had been going on as soon as they landed on Turkish soil on April 2.

Moments later, technical sales manager Sophie made a shock appearance too and the two girls then dumped their shared lover at arrivals before heading off together to enjoy Istanbul.

Engineer Kristen is sharing the pair’s story in the hope other women pick up on the warning signs – admitting his refusal to commit to plans should have been a red flag.

Kristen said: ‘I found out about him cheating about four days prior to the trip. 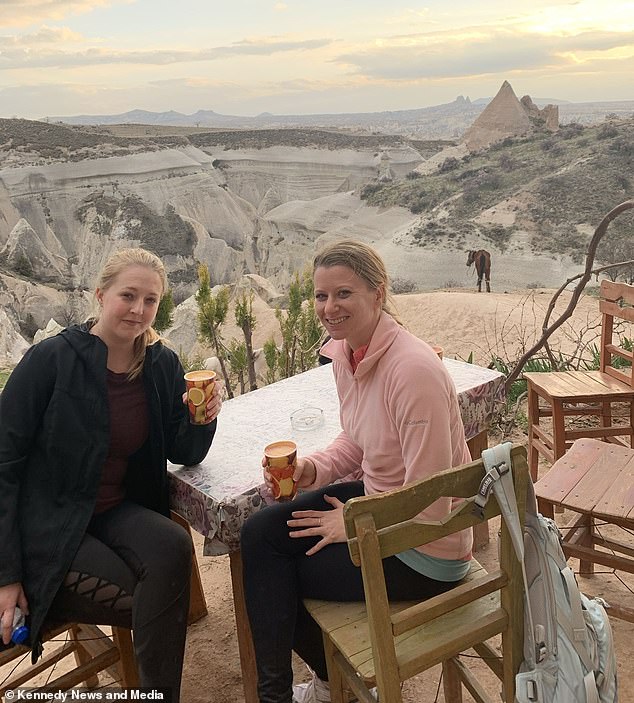 Kirsten (right) initially refused to believe Sophie Miller’s, 26, revelation, but the pair soon began to plot their revenge on the ‘cheating’ boyfriend by confronting him and then having a holiday in Turkey together (pictured)

‘[Sophie and I] honestly had a phenomenal time. From the moment we met, we instantly connected, over an unfortunate circumstance.

‘We became friends quite quickly after we met up. We had lots of time to get to know each other and develop the friendship that came out of it.

‘We really bonded over the eight day trip and it’s by far the happiest thing out of this unfortunate situation, that I found a great friend.

‘There was some shock when it first came about. Any person is going to take some time to process and learn [from this].

‘Sophie and I are strong people, with strong morals, and we’re taking this as a lesson learned.

‘A girls’ trip is infinitely better than trying to travel alone to a foreign country. 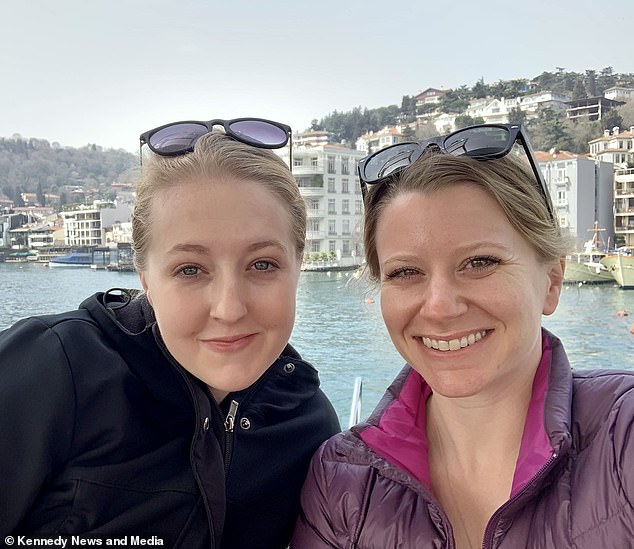 Kriste told Sophie of her plan to travel solo in Turkey, but Sophie offered to join her. Pictured: The pair enjoying  a cruise on the Bosphorus

Kristen first met Adam on the dating app, Hinge, in August 2020 and although they dated casually at first, then eventually became exclusive, even planning a holiday together to Turkey.

The pair had planned three days admiring the hot air balloons in Cappadocia, before returning to Istanbul to enjoy the bazaars.

But just four days before the 12-hour flight, Kristen received a voicemail out of the blue, from an unknown woman who claimed to have been seeing her boyfriend Adam for nine months – even FacetTming her from his flat.

Kristen said: ‘Shortly before departing on our trip, I learned that he was not [just] with me and there was another girl who had been in the mix since we met up.

‘She contacted me and left me a voicemail and that’s how I found out.

‘She left me a short voicemail, to the point, that basically said: “Hey, I’ve just learned about you. I’ve been dating this person for nine months and I thought you’d like to know about me. Give me a call if you have any questions”. 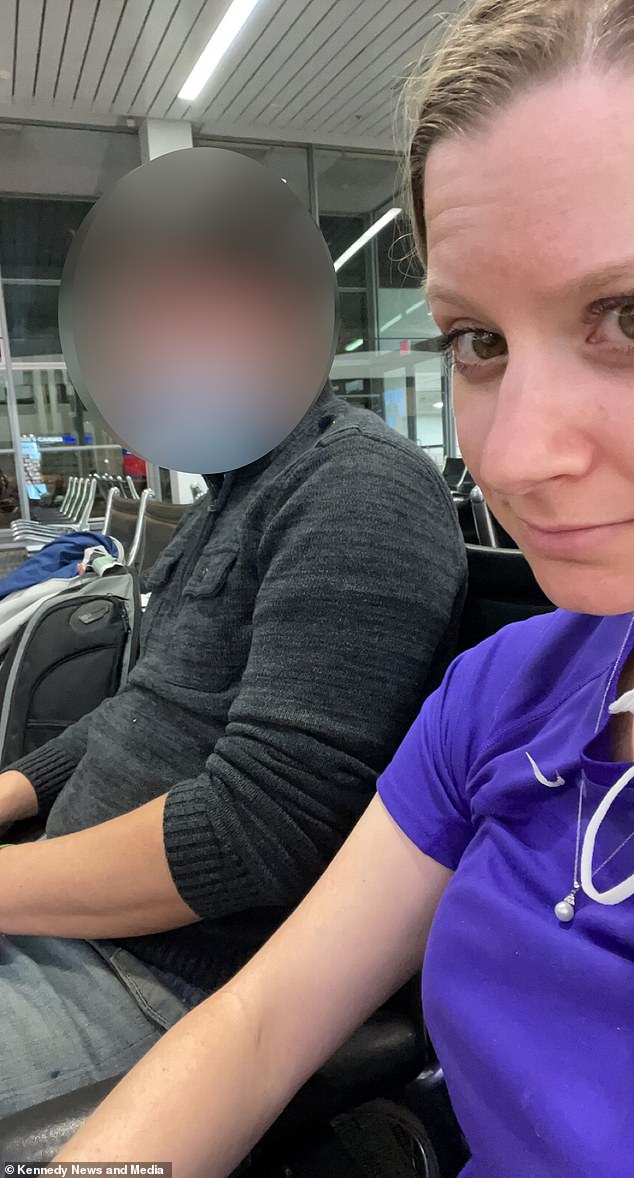 Kristen bishop, 33, from houston, texas, in airport with alleged cheat Adam, shortly before confronting him with his other girlfriend, Sophie Miller

‘After the initial shock, I gave her a call and we chatted for a bit.

‘It was clear very quickly that she was telling the truth and we needed to talk some more to get to the bottom of what was happening.

‘He met her on the same dating app about one month before he contacted me. He reached out to both of us initially on the app.

‘At first, getting the phone call was a bit shocking and [I was] in disbelief. Sophie was a really good team player about it and at the time I made first contact with her, I was asking questions and she said, “I’m at his house now if you’d like to see”.

‘I said, “No, no, he’s out of town this weekend”, because that’s what I believed to be true. She FaceTimed me to show me where she was.

‘We decided to get together the next day to piece together what was happening and figure out the real truth.’

The following day, Kristen met up with her new ally to discuss their relationship with the same man – before speedily plotting to confront him in the airport. 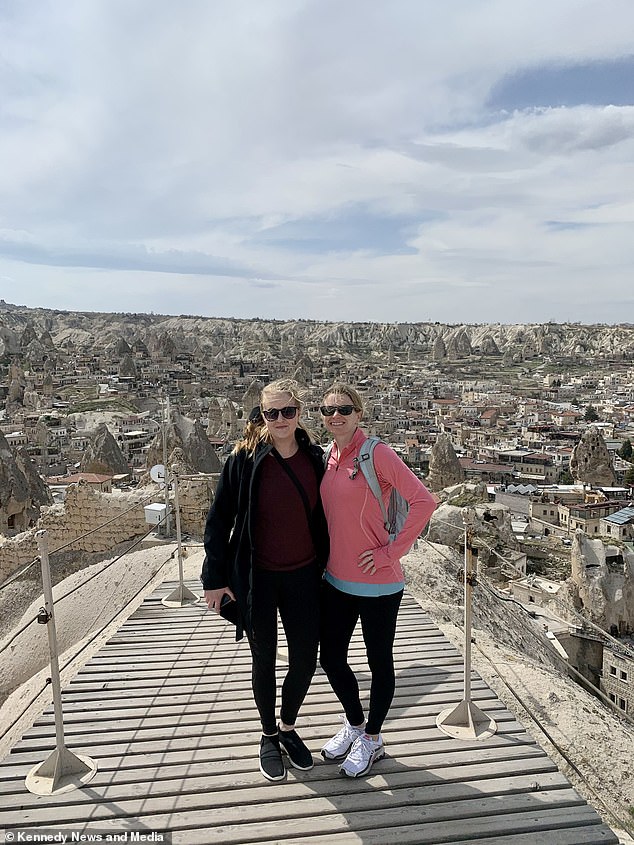 After Sophie made a shock appearance too and the two women dumped their shared lover at arrival, they headed off for a trip around Turkey including Cappadocia (pictured)

A couple of hours later, Sophie had booked on the trip and the pair were planning how to tell Adam he’d been caught out.

Kristen said: ‘At that point, because it was so close to the trip, we couldn’t cancel anything fully, so I decided to take the trip anyway and confront him upon arrival in Turkey.

‘From the moment that Sophie and I met, we connected very well. It was obvious she had a good heart, she was a good person, and I was thankful she was coming to me, to tell me what was going on.

‘She was very supportive. I was supportive of her. She decided to leave the relationship, which is a difficult decision to make.

‘I told her I was going to be travelling solo to Turkey. I’m not afraid to travel alone, it’s something I’ve done before. But she offered to join me so I wouldn’t have to be alone.

‘Once Sophie offered to come on the trip, she booked the tickets a couple of hours later.

‘Sophie planned to come in on a different flight than we did. We didn’t want to have him see her on the way there. 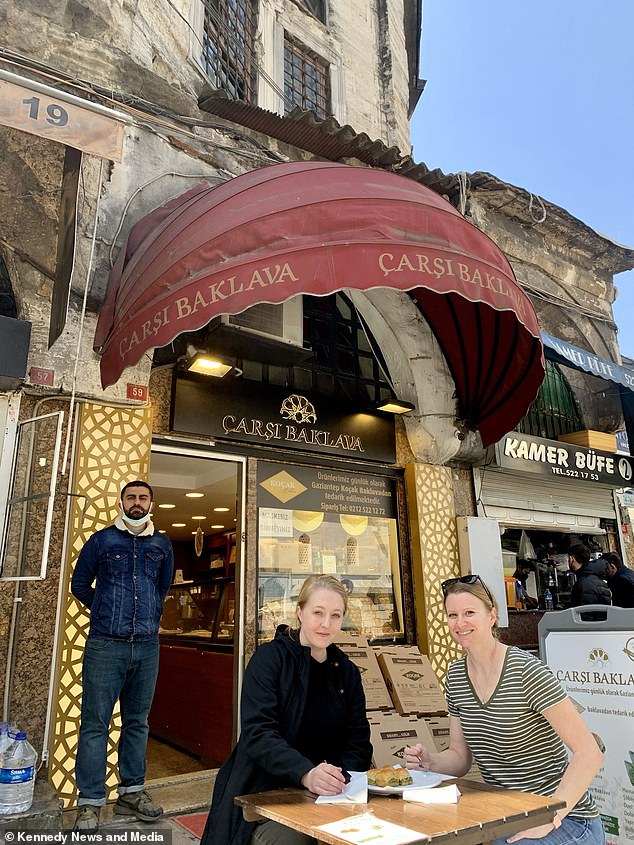 ‘She arrived a couple of hours before we did. She was already waiting at the airport when we arrived.

‘We planned not to talk to each other after we got on the plane. I told her I’d see her in Istanbul and we’d touch base as soon as we landed.

‘Once I was at the airport, I had a message from her saying, “Here’s where I’m going to be sitting”. We touched base in the women’s bathroom for a quick moment.

‘We had a spot picked out where I was going to confront him.’

As soon as they arrived in the terminal, Kristen says she confronted her boyfriend, revealing all of his reservations had been changed to Sophie’s name – and demanded he never contact them again.

Kristen said: ‘I showed him some photos. One was a photo of me and Sophie, after we met up on that first night. 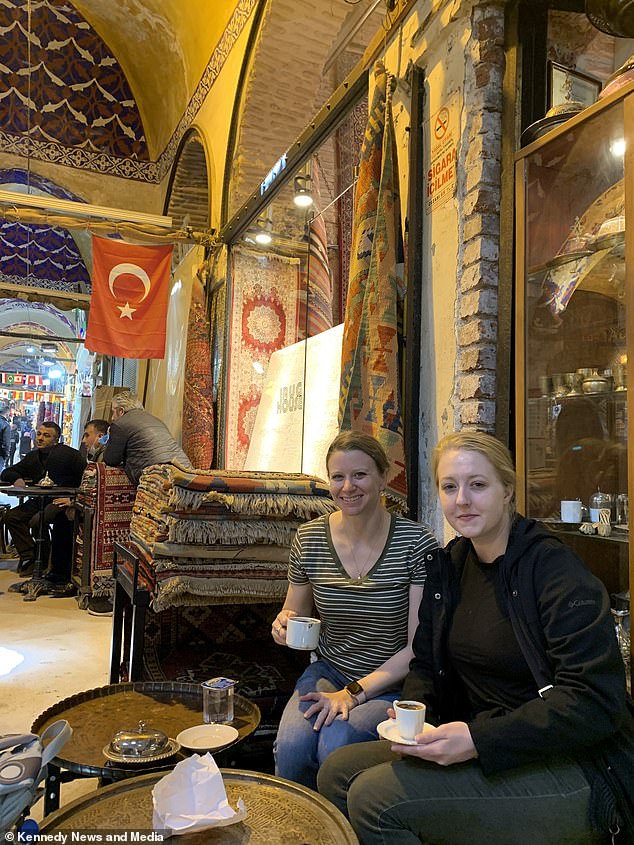 Kristen and Sophie enjoyed tea at the Grand Bazaar in Istanbul. Their ex-boyfriend ended up on the same flight home after the trip where they were put sitting behind him but they haven’t heard from him since

‘At which point I said: “Please do not contact me again. You have no reservations in Turkey”.

‘He asked if he could explain and I showed him some additional photos that Sophie had provided me, which proved that while I believed he was in one location, he was actually with her in another location.

‘His reaction was pretty stunned. He had never been speechless before, until that moment. There were several circumstances like that.

‘It was very firm and I would not be convinced to change our mind on this. I knew the details and it was final.

‘I told him not to contact me again or follow me out of the airport. At which point I turned around, waved over to Sophie and she walked up.

‘His jaw dropped when he saw her. She reiterated my message, we turned around and walked away together.

‘There was not much commentary on his part. He had already attempted to paint her in a negative light prior to that. 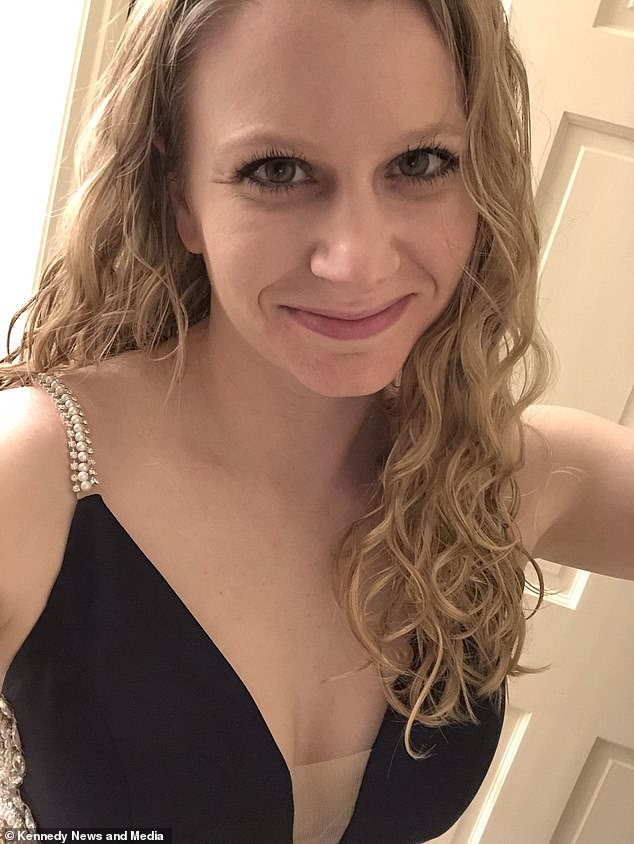 ‘He had tried to say they’d been broken up. I knew that wasn’t truthful. There wasn’t much opportunity for him to respond.’

The two new singletons then turned and left the airport without their ex-boyfriend, who had been ditched before his long-awaited trip.

Hoping Adam would have been left panicking, Sophie and Kristen went to a hammam, cruised the Bosphorus River and explored caves – with little thought of the man who brought them together in difficult circumstances.

Kristen said: ‘He ended up being on our flight home. Other than that, we have not heard from him.

‘There was a very short-lived attempt to mention something, but we weren’t interested.

‘We were actually sitting behind him on the flight back. That’s a 13-hour flight.

‘We just sat there chatting, giggling and enjoying the flight, and he heard every word.’

Now Kristen is sharing the warning signs so other women don’t fall victim to cheats – admitting his alleged refusal to commit to plans or communicate while away should have been a red flag.

Kristen said: ‘From my perspective, the warning signs were [he was] not willing to integrate or engage.

‘If they can only meet up on one day of the week or aren’t willing to commit to a plan or activity, I think the total lack of communication on those times when he was away is definitely a big sign.

‘When he said he was away for the night, he would mix and match. Typically it was ‘I have to work’. Sometimes it would be ‘I’m going hunting with the boys’.

‘He was very inflexible. He tried to control the way everything went, on which days we’d get together and where we would go.

‘Always trust your gut, know your worth and empower other women.’