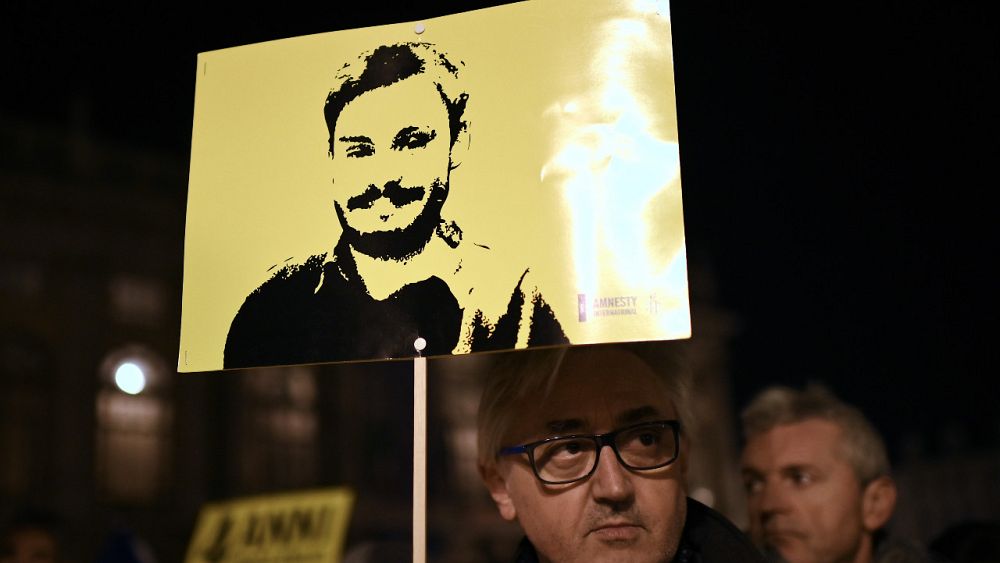 Egyptian prosecutors on Monday slammed their Italian counterparts’ push to have five Egyptian police and intelligence officers stand trial in Italy over the 2016 abduction, torture and killing of an Italian researcher in Cairo.

Italy has for years pressured Cairo to identify and prosecute those responsible for the death of 28-year-old Giulio Regeni, who disappeared for several days in January 2016 before his body was found on a desert highway north of the Egyptian capital.

Since late 2018, Italian prosecutors have called for Egypt to hand over the five intelligence and police officers or to at least help Italy prosecute them in absentia.

Rome has also carried out its own investigation, which is expected to wrap up soon. According to the Egyptian prosecutors’ statement on Monday, the Rome prosecutors have notified the Egyptians that they are going to conclude their investigation with charges against the five.

The Egyptian statement said this was “baseless,” and that Regeni’s killer remains unknown. In addition, Egypt’s prosecution on Monday said it would close its investigation temporarily — possibly to prevent any further moves by the Italian side.

However, an Italian parliamentary commission on Regeni’s death was to meet on Tuesday in Rome for a briefing on the status of the investigation.

Regeni was a Cambridge University graduate student who was researching trade unions in Egypt.

A spokesman for Egypt’s Interior Ministry, which oversees the police, did not immediately return requests for comment.

“We believe that our government must take note of this latest slap in the face and immediately recall the ambassador” from Cairo, the Italian news agency LaPresse quoted their statement as saying.

The Regenis said they appreciated the “resolute determination of our prosecutors, who were able to conclude the investigations without being worn down or letting themselves be confounded by the numerous attempts to get them off track, by the interminable postponements and by the lack of Egyptian responses.”

The statement also decried the “constant and blatant absence of collaboration by the part of the regime,” including not responding to formal judicial questions posed by the Italian authorities in 2019 and “not even wanting to supply the formal addresses of the five National Security officials, who were formally listed as being under investigation two years ago.”

For suspects to be brought to trial in Italy, even in absentia, they must be formally notified that an indictment request has been issued. Italian media have reported that Egyptian authorities have balked at providing Italian justice officials with the official addresses of the suspects in order for the notification to take place.

The five suspected officers named by Italian prosecutors were being investigated on possible abduction charges related to the killing. They are a now-retired major-general and a major at the domestic branch of the security agency, two police colonels and a junior police officer, according to officials in Cairo. At least one of the officials has been reassigned to a remote province.

Police Maj. Gen. Tareq Saber was a top official at the domestic security agency at the time of Regeni’s abduction and killing. He retired in 2017. Police Maj. Sherif Magdy served at the same agency, and was in charge of the team that placed Regeni under surveillance.

The police officials were Col. Hesham Helmy, who served at the time of the abduction at a security center in charge of policing the Cairo district where Regeni lived; Col. Acer Kamal, who was head of a police department in charge of street operations and discipline; and junior police officer Mahmoud Nejm.

Rome Prosecutor Sergio Colaiocco said in 2018 that the suspects are believed to have been active participants in Regeni’s abduction in Cairo on Jan. 25, 2016 — the fifth anniversary of Egypt’s popular uprising against President Hosni Mubarak. The country at the time was run by President Abdel Fattah el-Sissi and thousands of policemen deployed across Cairo on the anniversary to pre-empt any attempt to mark the occasion.

The torture marks on Regeni’s body resembled the results of widespread torture practices in Egyptian detention facilities, activists and rights groups have said.