A fit and healthy father diagnosed with a rare form of brain cancer has shared the warning signs everyone should know after he mistakenly assumed his headaches were caused by his high-powered job.

Lee Wolfe, 44, resigned from his position as a business development manager in April after attributing intermittent migraines to the stress of his career.

But one week later, around 6am on Anzac Day, he had a seizure that caused him to fall and hit his head while making a bottle for his youngest son Jack, one, at their home in Brisbane, Queensland.

In hindsight, the dad-of-two said he also experienced bouts of blurred vision in the months leading up to his seizure – a telltale sign he wants others to know about. 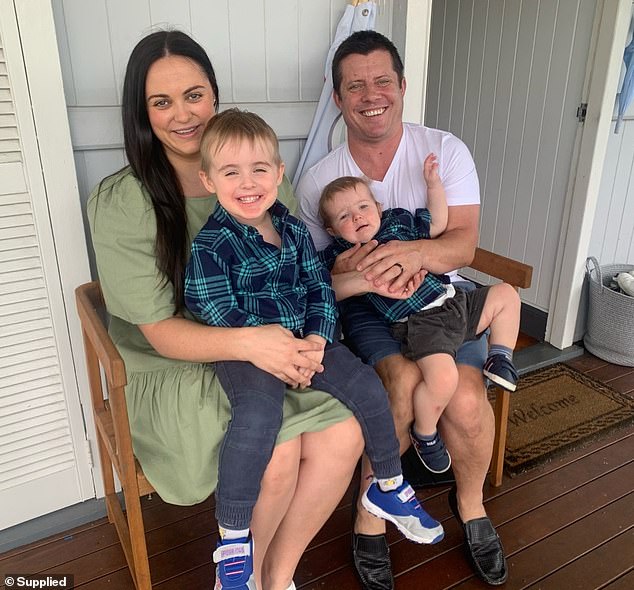 Business development manager Lee Wolfe with his wife Laura and their two sons Max (left) and Jack (right) at their home in Brisbane, Queensland

Unable to carry him to the car, Lee’s wife Laura, 32, called an ambulance to take him to hospital where scans showed a large tumour in his hippocampus, the part of the brain that controls learning and memory.

Two weeks later the couple’s world was shattered when Lee was diagnosed with advanced glioblastoma, a rare form of brain cancer that gives sufferers an average life expectancy of 12 months.

Doctors say Lee’s tumour is inoperable due to its size and position embedded deep in the lower half of the brain, where it has wrapped ‘like spiders legs’ around life-sustaining blood vessels and complex nerve systems.

They say trying to remove the growth would almost certainly cause irreparable damage to vital components which govern abilities such as speech and emotion that make him who he is.

Lee’s tumour is a diffused astrocytoma, which grows outwards in shoots instead of in a neat, round shape. 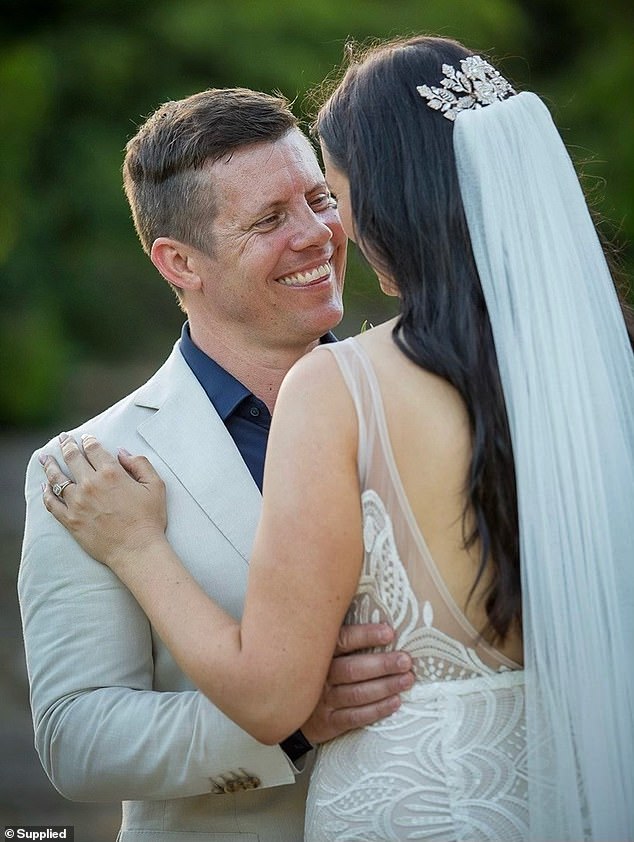 After suffering a seizure around 6am on Anzac Day, Lee’s wife Laura (pictured on their wedding day) called an ambulance to take him to hospital where scans showed a tumour in his brain

‘It’s spidering out, almost like legs wrapping around different parts of the brain. That’s what makes it inoperable,’ Laura explained.

She recalled finding her husband ‘dazed and confused’ on the morning of his seizure, still trying to feed their son while blood dripped down his face.

‘He just kept saying “I don’t know what happened”, his eyes couldn’t focus. It was so bizarre, I’ve never seen him like that,’ she told Daily Mail Australia.

‘He’s a really strong, fit, muscular guy so you just don’t imagine someone like that being the way he was that day.’ 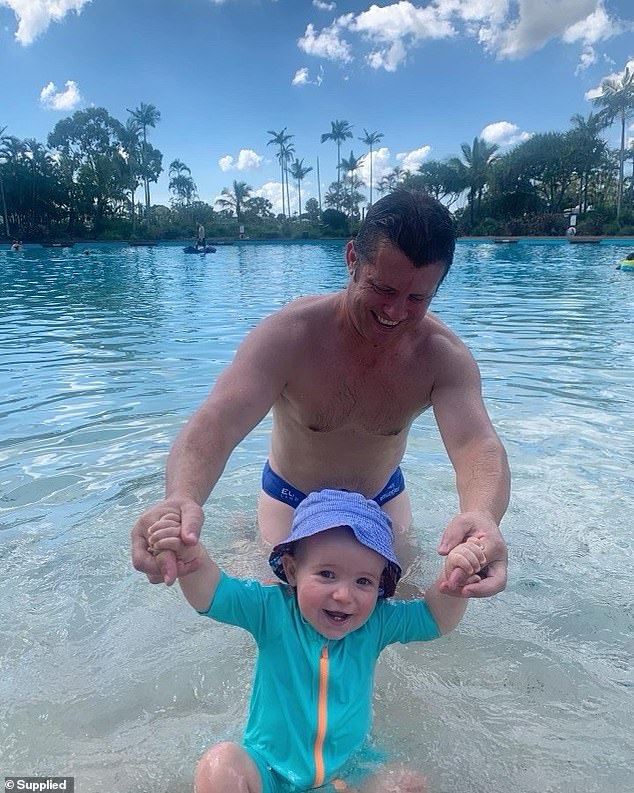 The doting dad (pictured with his youngest son, Jack) had headaches and blurred vision in the months leading up to his diagnosis but mistakenly assumed they were caused by stress from his high-powered job

Lee is one of roughly 1,879 Australians diagnosed with a brain tumour each year, government health data shows.

While figures for glioblastoma patients are not regularly recorded, one 2013 report lists 982 new cases in Australia that year alone.

Glioblastoma is a rare and highly malignant form of cancer that typically develops in the cerebral hemispheres – the main body – of the brain, but it can also grow in any area or in the spinal cord.

The tumours are particularly malignant because they grow rapidly, supported by an extensive network of blood vessels that run throughout the brain.

Glioblastoma is most common in older adults, but has been known to occur in children and teens.

But as Lee’s story proves, the disease can progress rapidly and insidiously with scarcely any symptoms.

Once glioblastoma has advanced to level four, patients are typically given a prognosis of 12 to 14 months.

Glioblastoma is a rare and highly malignant brain tumour that typically develops in the cerebral hemispheres of the brain (the main body), but can also occur in any area of the brain or spinal cord.

They are particularly malignant because they grow rapidly, supported by an extensive network of blood vessels connected to the brain.

It is most common in older adults, but can also occur in children and teens.

Symptoms include headaches, nausea, vomiting, double vision and confusion or sudden change in mental clarity. More specific symptoms depend on the location of the tumour and the functions affected.

For example, glioblastoma that occur near the motor cortex – the part of the brain involved in movement – can cause loss of sensation on one side of the body. 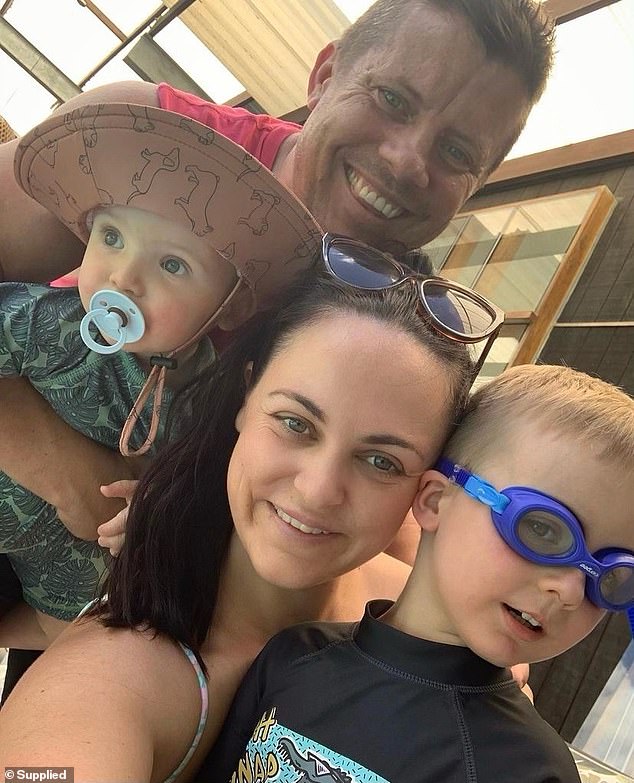 On June 10, Lee is due to begin a combined treatment of chemotherapy and radiation which doctors believe is the best chance at slowing the growth of his tumour.

Tests to determine how far his cancer has progressed are still ongoing, but the Wolfes have been told it is at least stage three, and likely stage four.

When glioblastoma has advanced to this level, patients are given a life expectancy of just 12 to 14 months.

Laura said she is humbled by her husband’s bravery and strength.

‘I’m so proud of the way he’s handling it all,’ she said. 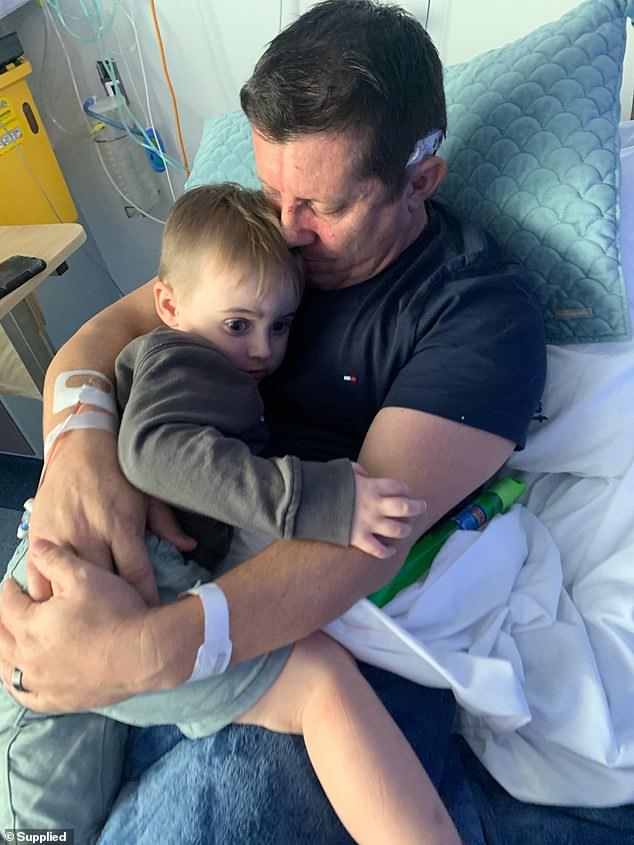 Lee has also amazed doctors by displaying none of the degenerative signs typically associated with advanced glioblastoma, which usually causes slurred speech and largescale memory loss.

‘He’s still talking a mile a minute, the consultants are just entranced by him,’ Laura said.

A crowdfunding campaign launched by Laura’s friend Amy has raised $36,540 at the time of writing.

Donations will help Laura and her sons Max, three, and Jack, one, stay afloat while Lee undergoes treatment.

Laura described her husband as ‘an incredibly positive person’ and said he is cherishing every day he spends with their family.

For more information on glioblastoma and other types of brain tumours, please visit the Australian Cancer Council or Brain Foundation.

The five biggest questions for Week 6 in college football