More than four million people have now died of Covid-19 infections, the World Health Organization said on Wednesday, but added that the true death toll of the pandemic was likely higher.

Many richer nations are preparing to loosen lockdown restrictions even as countries in Asia battle surging infections.

‘The world is at a perilous point in this pandemic. We have just passed the tragic milestone of four million recorded Covid-19 deaths, which likely underestimates the overall toll,’ WHO chief Tedros Adhanom Ghebreyesus told a press conference.

The tally of lives lost over the past year and a half, according to Johns Hopkins University, is about equal to the number of people killed in battle in all of the world’s wars since 1982, according to estimates from the Peace Research Institute Oslo.

The toll is three times the number of people killed in traffic accidents around the globe every year. It is about equal to the population of Los Angeles or the nation of Georgia. It is equivalent to more than half of Hong Kong or close to 50% of New York City.

Even then, it is widely believed to be an undercount because of overlooked cases or deliberate concealment.

With the advent of the vaccine, daily deaths from Covid-19 in the US have plummeted to around 7,900, after topping out at over 18,000 a day in January. The US has the highest number of deaths in the world, with 605,906 people killed by the virus.

But in recent weeks, the mutant Indian Delta variant has set off alarms around the world, spreading rapidly even in vaccination success stories like the U.S., Britain and Israel. In the US, it accounts for half of all new infections. 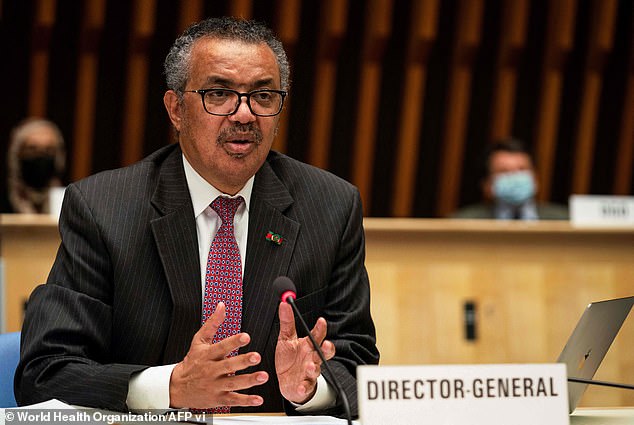 The world passed the ‘tragic milestone’ of four million recorded Covid-19 deaths on Wednesday as the World Health Organization added that the true death toll of the pandemic was likely higher (pictured: WHO chief Tedros Adhanom Ghebreyesus) 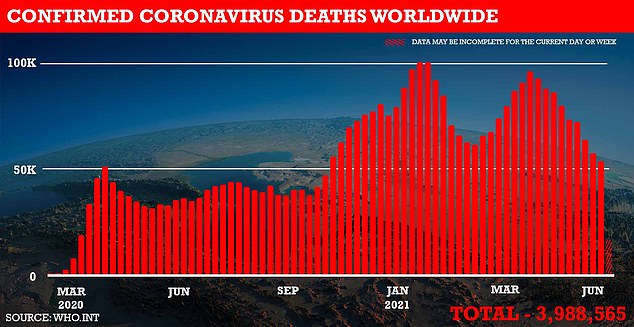 Britain, in fact, recorded a one-day total this week of more than 30,000 new infections for the first time since January, even as the government prepares to lift all remaining lockdown restrictions in England later this month.

Other countries have reimposed preventive measures, and authorities are rushing to step up the campaign to dispense shots.

At the same time, the disaster has exposed the gap between the haves and the have-nots, with vaccination drives barely getting started in Africa and other desperately poor corners of the world because of extreme shortages of shots.

The U.S. and other wealthy countries have agreed to share at least 1 billion doses with struggling countries.

The U.S. has the world’s highest reported death toll, at over 600,000, or nearly 1 in 7 deaths, followed by Brazil at more than 520,000, though the real numbers are believed to be much higher in Brazil, where President Jair Bolsonaro’s far-right government has long downplayed the virus.

At a press conference in Geneva on Wednesday, Tedros said: ‘The world is at a perilous point in this pandemic. We have just passed the tragic milestone of four million recorded COVID-19 deaths, which likely underestimates the overall toll.’

The U.N. health agency’s director-general said some countries with high vaccination coverage were now ‘relaxing as though the pandemic is already over,’ dropping public health measures and planning to roll out booster shots. And he also criticized richer nations for pre-purchasing shots.

‘Vaccine nationalism, where a handful of nations have taken the lion’s share, is morally indefensible,’ Tedros said. ‘At this stage in the pandemic, the fact that millions of health care workers have still not been vaccinated is abhorrent.’

But he said that far too many countries all over the world were seeing sharp spikes in cases and hospitalization, due to fast-moving virus variants and a ‘shocking inequity’ in global access to vaccines.

The variants, uneven access to vaccines and the relaxation of precautions in wealthier countries are ‘a toxic combination that is very dangerous,’ warned Ann Lindstrand, a top immunization official at the World Health Organization.

Instead of treating the crisis as a ‘me-and-myself-and-my-country’ problem, she said, ‘we need to get serious that this is a worldwide problem that needs worldwide solutions.’ 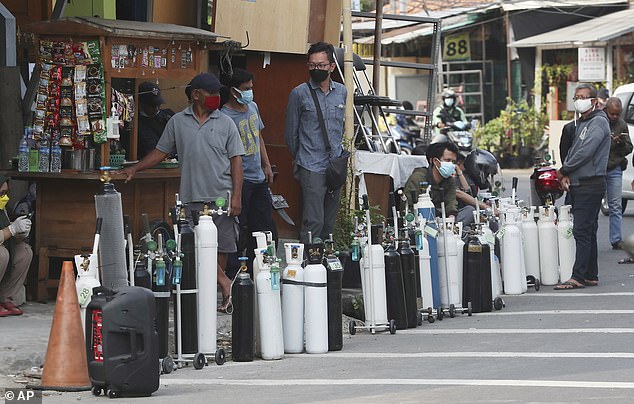 Indonesia is facing a devastating second wave of the Covid-19 outbreak as hospitals grapple with soaring cases amid widespread shortages of oxygen (pictured: People line up to refill their oxygen tanks at a filling station in Jakarta on Wednesday)

Indonesia has become a global hotspot, with hospitals having to turn away patients, authorities forced to import oxygen supplies and a record 1,040 deaths reported on Wednesday.

There have been more than 184,100,000 cases across the world since the pandemic began.

Dr Adhanom Ghebreyesus said some countries with high vaccination coverage were ‘relaxing as though the pandemic is already over’, while others have seen sharp spikes in cases because of highly-transmissible variants and a ‘shocking inequity’ in access to vaccines.

The Indonesian government has expanded restrictions across the archipelago following earlier clampdowns on the capital Jakarta and some other areas.

Senior minister Airlangga Hartarto said: ‘We need to pay attention to the availability of hospitals.’

The new restrictions apply to dozens of cities and extend across the vast nation of nearly 270 million people, which has been hammered by the highly infectious Delta variant that was first detected in India.

The Indian Delta-fuelled outbreaks have also led to the imposition of restrictions in Australia, including in its biggest city Sydney where lockdown orders on more than five million residents were on Wednesday extended by at least another week.

‘This Delta strain is a game changer, it’s extremely transmissible,’ said Gladys Berejiklian, premier of New South Wales state, of which Sydney is the capital.

Australia has largely kept its outbreaks in check since the pandemic began, but the government is under increasing pressure over the slow rollout of vaccines.

‘It’s still scary that the virus is out there,’ said Menno De Moel, 44, at a vaccination centre in Sydney where he was getting his first shot.

‘Hopefully this is going to be the last lockdown, but on the other hand anything that is needed, needs to be done.’

The US has the highest death toll, standing at 604,000 according to the WHO COVID-19 dashboard.

Countries around the world have been in and out of nationwide lockdowns to try to curb the spread of the deadly disease.

SARS-CoV-2, the coronavirus behind Covid, is constantly evolving and the majority of mutations are ‘benign’, according to Dr Jeff Barrett, of the Sanger Institute. 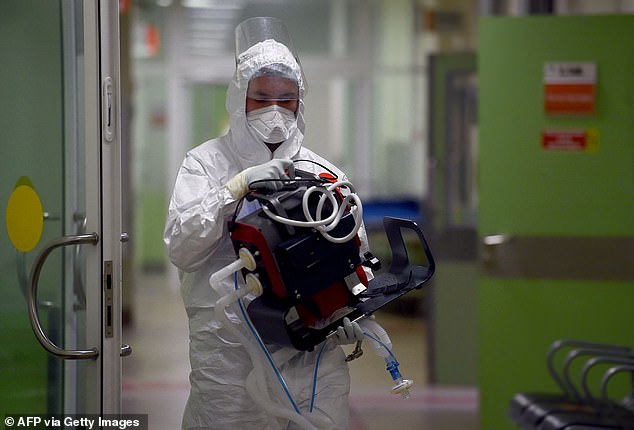 Many richer nations are preparing to loosen lockdown restrictions even as countries in Asia battle surging infections (Pictured: A medical worker wearing PPE carries a device in the Covid-19 ICU of Mariinsky Hospital in Saint Petersburg)

None of the variants are thought to get past immunity caused by the vaccine rollout, despite the dozens of variants already spotted.

Oxford University academics who crafted the AstraZeneca jab say it is unlikely that any mutation will ever completely defeat vaccines.

However, the spread of a variant which dodges immunity could still lead to a spike in hospital admissions and deaths.

The Tokyo Olympics, already delayed by a year, also remain plagued by coronavirus fears, with authorities and organisers trying to find ways to safely host one of the biggest sporting events in the world just over two weeks before it begins. 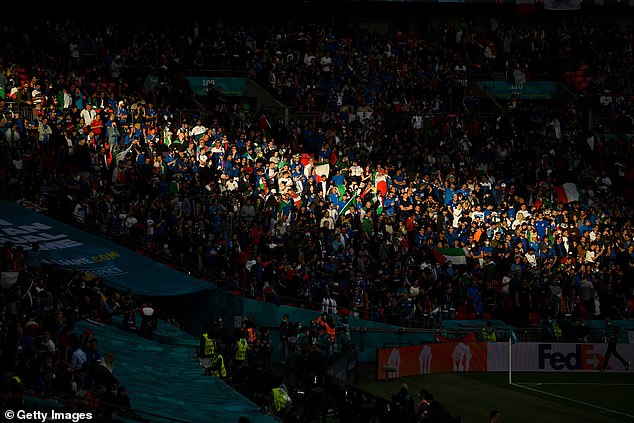 In London, the Euro 2020 football tournament’s semi-finals and final are set to be held this week with 60,000 fans permitted at Wembley Stadium, despite Britain facing a new surge in infections (pictured: Italy fans at Wembley Stadium on Tuesday night)

Officials announced on Wednesday that the Olympic torch relay had been scrapped on Tokyo’s roads to prevent crowds.

With infections on the rise, the government is expected to extend restrictions this week that will likely affect the number of fans that can attend Olympic events.

In London, the Euro 2020 football tournament’s semi-finals and final are set to be held this week with 60,000 fans permitted at Wembley Stadium, despite Britain facing a new surge in infections.

Mass vaccinations, however, have stopped a resultant surge in hospital admissions or deaths.

Prime Minister Boris Johnson has announced the end of most virus restrictions, such as face masks and indoor social distancing, in England. Scotland, Wales and Northern Ireland are moving more slowly. 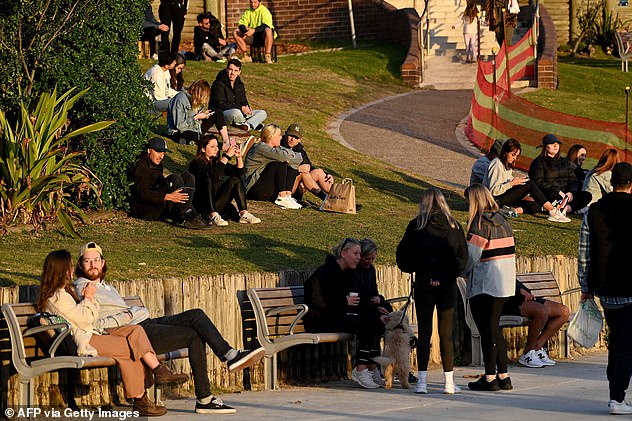 Delta-fuelled outbreaks have also led to the imposition of restrictions in Australia, including in its biggest city Sydney where lockdown orders on more than five million residents were on Wednesday extended by at least another week (pictured: People sit along the grassy area at Bondi Beach in Sydney on Tuesday, as the city remains in lockdown for a second week)

As some countries peeled back Covid restrictions, the WHO sounded alarm over a lack of funding to fight the pandemic.

It said Tuesday its global appeal for funding for coronavirus vaccines, treatments, diagnostics and equipment was still $16.8billion short – almost half its total needs.

Even in wealthier nations with successful inoculation programmes, authorities are wary of a resurgence and have kept some restrictions in place, such as the requirement for face masks on flights in the U.S.

But an American Airlines flight from North Carolina to the Bahamas was delayed by a day after around 30 teenagers refused to wear masks, U.S. media said on Tuesday.

Witness Malik Banks told local station WSOC-TV: ‘It was bad. First, they were yelling. They were cursing. They were being very obnoxious.’

Teen, 16, who 'shot and injured marine, 21, in NYC's Times Square' turns himself over to NYPD