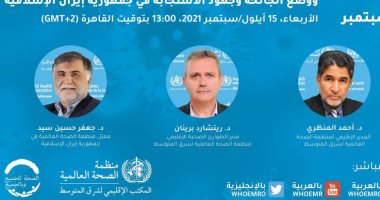 The World Health Organization held a press conference on the developments of the Corona pandemic in the Eastern Mediterranean Region, the situation of the pandemic and response efforts in the Islamic Republic of Iran, today, Wednesday.

Jaafar Hussein Sayed, the representative of the World Health Organization in the Islamic Republic of Iran, said that Corona vaccines and the main source of vaccination in Iran have been increased from the Kovacs facility, and we are trying to secure more vaccines, and active cooperation with vaccine manufacturers and Iran is following up on local production, and there are two types of vaccines that have been completed. Adopt them, and if we can increase the flow of vaccines we will cover more than the target, vaccination centers are the latest arrangements, and we have skipped more than a million doses given.

And the director of the World Health Organization had confirmed that rich countries that provide booster doses for the Corona virus are incorrect, while less than 5% of people in African countries are vaccinated.

Tedros Adhanom Ghebreyesus, Director-General of the World Health Organization, called on rich countries not to offer boosters for the Corona vaccine, and he had previously called for a two-month cessation of vaccine boosters and then suspended until the end of the year, explaining that less than 5% of Africans are fully vaccinated against Corona. While the global pace is 42%.

In Africa, only 3.7% of people are fully vaccinated against the virus because many poor countries on the continent do not have enough doses or the infrastructure necessary to build a massive operation, as many rich countries have done.

Celebrities who sent messages with their looks at Met Gala 2021.. Women’s empowerment and equality

Celebrities who sent messages with their looks at Met Gala 2021.. Women's empowerment and equality