Global Health: We are reviewing a new effective American drug to combat the symptoms of corona 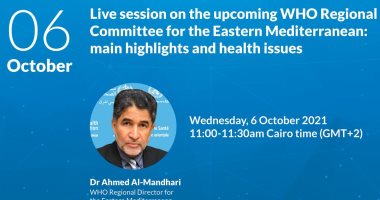 For his part, Dr. Ahmed Al-Mandhari, Regional Director for the Eastern Mediterranean, said that the Corona pandemic was the biggest challenge for us a year and a half ago, and we learned lessons and lessons from this pandemic, in methods of diagnosis and treatment, which is the main file of the committee, and polio, cardiovascular diseases, tobacco and its derivatives, and we strive to combat This epidemic, maternal and child health, and infectious diseases are also discussed, and we hope that decisions will be taken by the committee to implement them.

Dr. Abdel Nasser Abu Bakr, of the World Health Organization, added the new mutations, and while we are dealing with the pandemic, the mutation is a threat, as the virus changes from case to case and we see a number of new mutations, and there is a possibility for new mutations to appear as long as the virus exists, and what we have seen is that most of the mutations The last of them, Delta, did not show any effect on the success of the vaccine, explaining that all vaccines are successful and all protect and achieve the goal in mitigating the impact of hospitalization and death, and the organization is closely monitoring and we did not find any effects that hinder the vaccine and we strive for innovation.

He explained that the World Health Organization has supported genetic surveillance of the virus, and there are 14 countries in the Eastern Mediterranean Region that have the ability to monitor the genetic mutation of the virus, explaining that there are new drugs that have appeared in the United States and the organization is communicating with companies, and we have tested a number of drugs, and there is an American drug that has an effect on the virus. Indeed, the organization is reviewing this drug, and we need time to make it available to countries.

He said the organization is working with manufacturers and the academic community to try this drug, and the organization has approved a number of drugs over the past year and a half, explaining that the new drug will change the situation and relieve symptoms.

Dr. Tedros Adhanom Ghebreyesus, Director-General of the World Health Organization, had confirmed that the situation of vaccination against corona is slowly improving, with the expectation of large supplies of the vaccine for the last quarter of the year for middle and low-income countries, but the volume of what is required is huge, in terms of the number of vaccinators, and participation with communities, continuous monitoring and strengthening of health systems.

Of course, Corona is not the only health challenge we face, he added, noting that malaria remains a major public health problem, especially in Africa, where it remains the main cause of child mortality, and more than 260,000 children die from malaria every year.

A study published on the website Healthline, about the effectiveness of cranberry in treating urinary tract infections, because it...