Police in Pakistan‘s largest city, Karachi, are deploying an rollerblading unit armed with Glock pistols to curb theft and harassment on its teeming streets.

Gliding in a circle with their weapons pointed inwards, and lifting and lowering the guns in unison, the 20-member unit was filmed undergoing rigorous training.

‘We felt we needed to come up with an innovative approach to control street crime,’ said Farrukh Ali, chief of the unit, explaining that officers on rollerblades could more easily chase thieves on motorcycles through the city of 20 million.

Ali conceded that rollerblading police could not be deployed across many parts of Karachi due to the poor road conditions and uneven footpaths, but said they would be sent to public places with a higher incidence of theft and harassment. 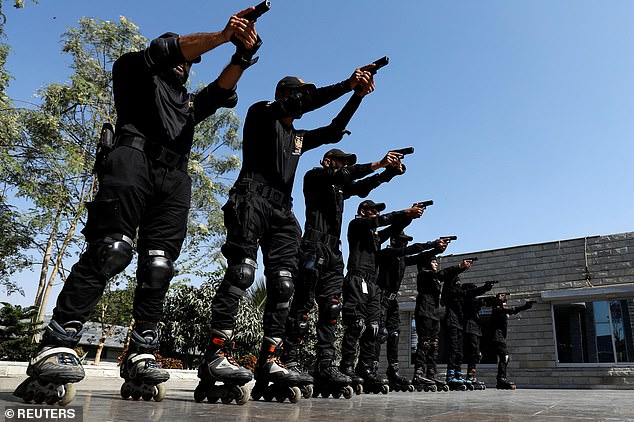 Police in Pakistan’s largest city, Karachi, are deploying an rollerblading unit armed with Glock pistols to curb theft and harassment on its teeming streets. Pictured: Special Security Unit (SSU) police members aim their weapons as they rollerblade during practice

‘This is just the beginning,’ said Aneela Aslam, a policewoman on the unit.

‘This rollerblading will really benefit us. With this training, we can reach narrow alleys very quickly where it is usually difficult to go.’

After a month of intensive rollerblade training, the squad will be deployed around the city’s narrow streets, busy intersections and in shopping centres.

Ali told local television networks that he was hopeful the force will help reduce street crime. ‘Foot patrolling is an extremely tedious job. Roller skates will give an edge to chase and apprehend [suspects],’ he said.

Dr Farrukh himself was shown in footage confidently skating down a flight of stairs and pirouetting while wielding an assault rifle.

Police spokesman Raja Memon hailed the unit, saying ‘the force has been set up to control street crime and it will be a weapon-wielding force moving fast on skates.’

But safety concerns were raised when initial footage of the Karachi unit’s training showed officers carrying heavier weapons, but Ali said the unit would only carry handguns, reducing the risk of bullets ricocheting. 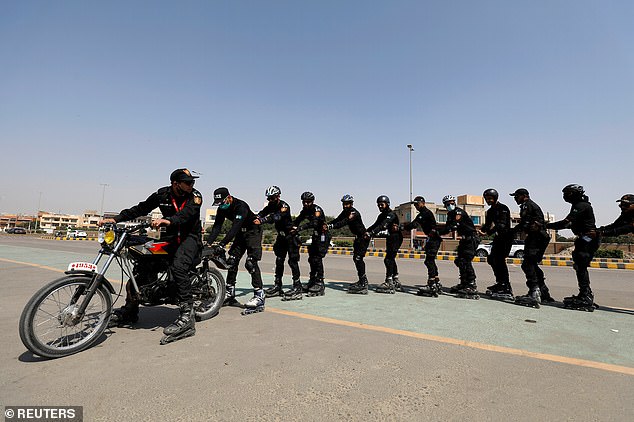 Pictured: Special Security Unit (SSU) police members follow a motorbike as they rollerblade during practice along a road in Karachi, Pakistan February 19, 2021 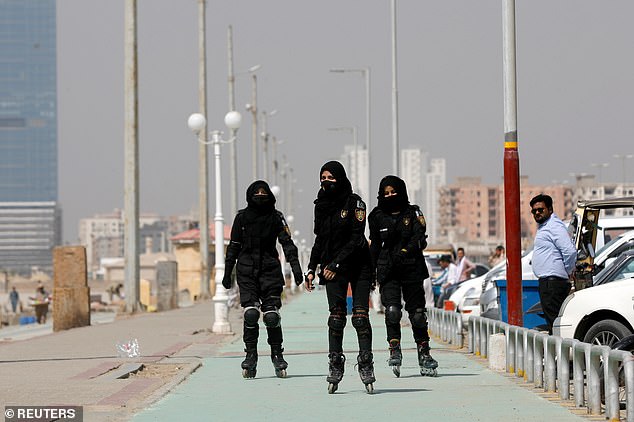 However, footage of the rollerblading police showed that some appeared to be more on their feet than others.

The rollerblading police – who follow in the footsteps of similar units in Europe and elsewhere – are expected to begin officially next month, but they were recently spotted outside the venue of the Pakistan Super League cricket tournament.

And they have already begun patrolling Karachi’s bustling beachfront.

‘Seeing them here in clean uniforms since the morning gives us a sense of security, as even in daytime, snatchings occur here,’ said pedestrian Muhammad Azeem. 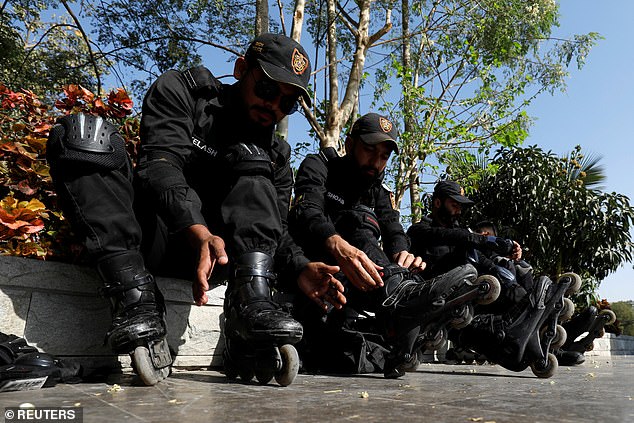 Rollerblading police could not be deployed across many parts of Karachi due to the poor road conditions and uneven footpaths. Karachi is known for its potholes 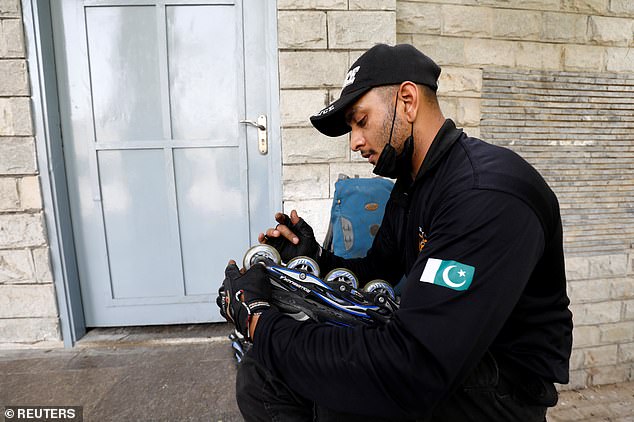 Pictured: A Special Security Unit (SSU) police member checks his rollerblade after a practice session at the headquarters in Karachi, Pakistan February 18

Karachi is notorious for its violent crime, and has been blighted by terrorist and separatist groups, as well as political division and organised crime gangs.

Military-backed efforts to flush out the violent groups has improved the situation in recent years, but street crime is still rife.

According to the World Crime Index that surveys the rate of criminal activities in 396 cities around the world, Karachi was tenth on the list 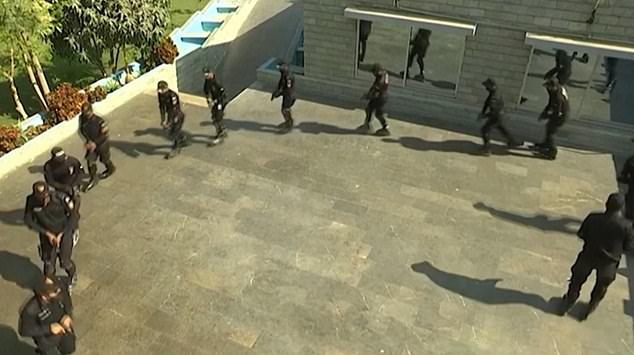 Pictured: A still from a video showing the roller-cops gliding in a circle while holding pistols

News of the new rollerblading unit was met with some amusement and derision of social media, however, with some joking that criminals would be able to escape the officers by simply finding a flight of stairs to escape up.

But police on skates have proven to be a success in other cities in the world.

In Paris, a team of eight roller-cops have been patrolling the streets for almost 20 years, often posing for selfies with tourists and present a friendly face of the French capital’s policing. They also carry truncheons and pistols.

London also dabbled with rollerblading police officers in parks, but Scotland Yard put an end to the scheme when people were able to escape by running on the grass.

The suicide of the “Bidun child” causes an uproar in Kuwait … and shocking details about the reasons!