Stacey Currie found out she was pregnant when she was 15 years old.

Her dad bought a cheap cask of wine to celebrate, but the teenager was more confused than excited. She didn’t have a clue how a person could even get pregnant.

She’d been kicked out of every sex education class at her school in Nowra, on the New South Wales south coast. But that wasn’t unusual, Stacey was often made to wait outside class due to bad behaviour.

She grew up in housing commission on one of the most underprivileged streets in town with her dad, six siblings and step-mum. 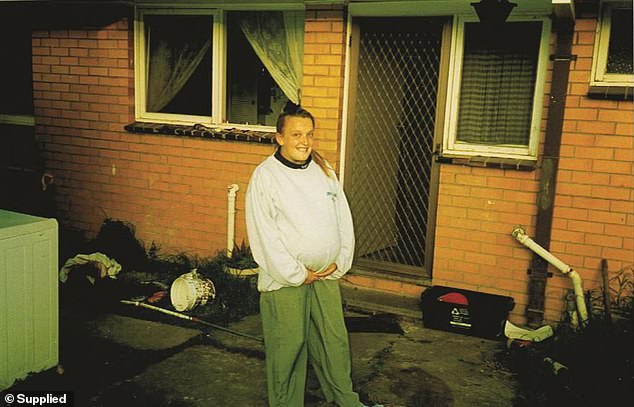 When she was just 15 years old, Stacey Currie found out she was pregnant. Pictured while she was pregnant with her first son, Josh, out the front of their housing commission home

The family foraged for furniture at the local tip, often went to school in filthy clothes and their tiny three-bedroom house was covered in mould.

There weren’t any rules, her dad never cared if she did well in school or looked neat and tidy like the other kids. Most of the time, he acted just like one of her siblings.

Stacey, now 42, admits her life was filled with hardship, categorised by sexual abuse and personal trauma, but looks back fondly on her childhood and the rough-and-tumble way she was raised.

She was pregnant again when she was 17, and her boyfriend broke up with her to move back home with his parents.

Stacey could no longer afford to rent the little flat they’d been sharing and found herself sleeping on floors in friends’ homes. 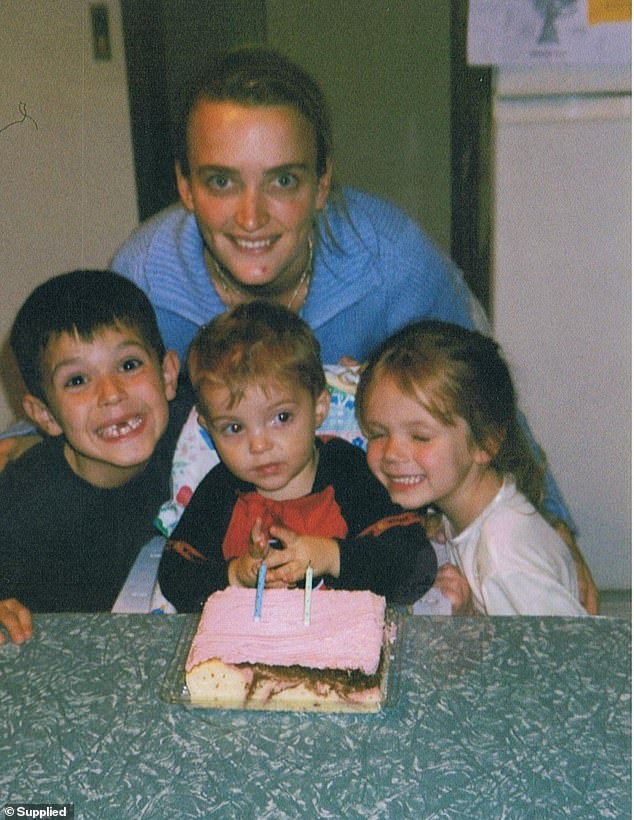 After she was awarded custody of her kids, child services authorities gave Stacey and her children this blue dining table, and she felt like ‘the luckiest person in the world’

Stacey has no memories of her mum who left when she was an infant.

She and her older brother, Danny, were largely left to fend for themselves while her father worked long hours as a taxi driver.

From her first day of kindergarten, Stacey would wake herself up, find her school uniform – normally scrunched up on the floor under a pile of wet or dirty clothes – put it on and walk to class.

She’d rarely brush her hair, and she and Danny would walk to school regardless of the weather, often taking detours to find a messy, muddy adventure along the way.

It wasn’t until she invited a classmate over to her house that she realised she lived differently to the other kids at school. 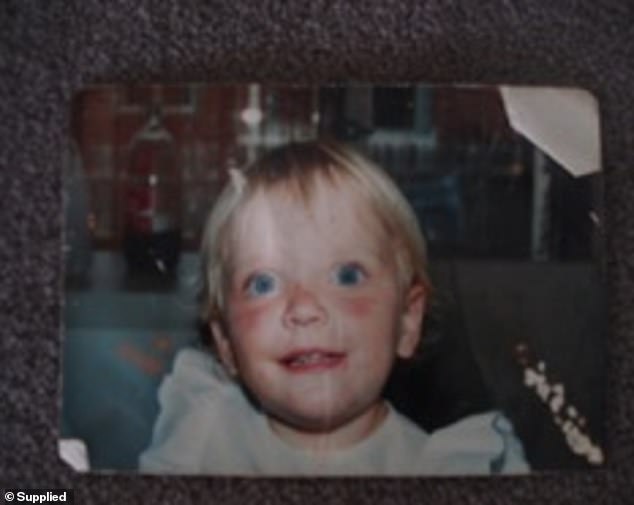 Stacey’s mum left when she was so little that she has no real memories of living with her. Pictured: Stacey as a toddler

The little girl went back to class the next day and told the other children that Stacey’s house was disgusting, dripping in mould and dirty.

‘Around then, I noticed that I was the only child who was grubby and had unbrushed hair,’ Stacey explained in her new autobiography, Good Riddance.

Over time, she learned her family also had a ‘dodgy reputation’ in the area which meant many children weren’t allowed to play with Stacey or her siblings.

At 14, Stacey moved out of her three-bedroom home and into the shed out the back, which her dad helped her to decorate with furniture from the tip.

Not long after, her boyfriend moved in. 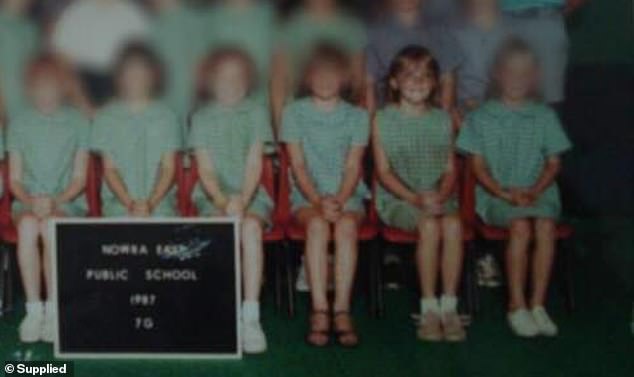 From her first day of kindergarten, Stacey would wake herself up, she’d find her school uniform – normally scrunched up on the floor under a pile of wet or dirty clothes – put it on and walk to class. She says it’s always easy to spot her in school pictures, because she’s always the one with a filthy uniform that has a brown tinge (second from the right)

One afternoon, Stacey went into the house to visit her dad after a doctor’s appointment. He told her he’d been diagnosed with a hernia, and pointed to it on his stomach.

Her father rarely wore a shirt and normally got around the house wearing nothing but jocks, so it was hard to miss.

‘Sh*t dad, I’ve got one of those too,’ Stacey said, lifting her own shirt to show her protruding stomach.

Her father encouraged her to go to the doctor, who said Stacey was pregnant.

Stacey said it never even crossed her mind to be scared or anxious. The then 15-year-old assumed life would go on largely as normal – which it did. 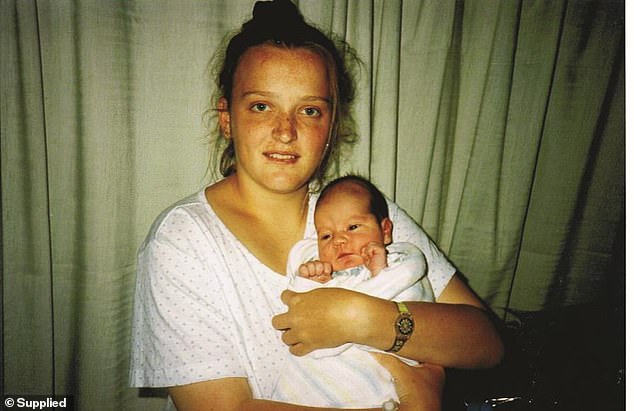 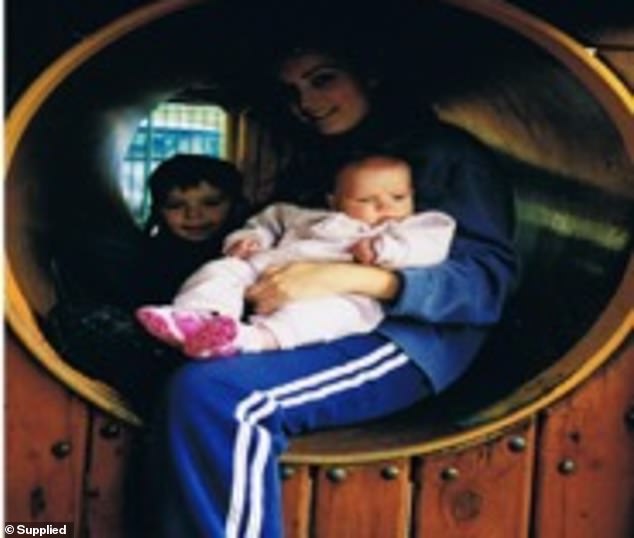 Stacey found herself homeless after the birth of her second child, daughter Tahlia (pictured with Josh)

She told Daily Mail Australia that even after having her first baby, she didn’t entirely understand how it had occurred and didn’t even consider taking precautions or using contraception.

‘It just never occurred to me that I’d get pregnant again,’ she said.

In preparation for her second baby, she, her boyfriend and their young son, Josh, moved into a tiny flat.

But the pressures of having two children were too much for the couple and the relationship deteriorated.

Stacey knew they wouldn’t fit back in her father’s home – as much as he would have liked them to – so she couch surfed and did her best to stay on top of things. 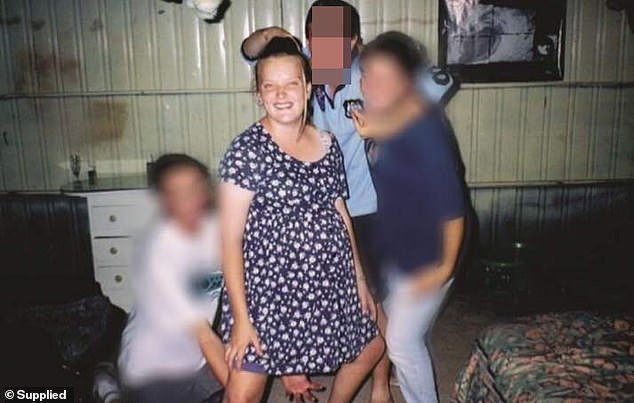 Her family were thrilled at the thought of Stacey having a baby. Pictured posing alongside some of her relatives while she was pregnant

1. Notice every decision you make, every minute of the day. Consider whether it’s leading you to a life you want or keeping you in a life you don’t want.

2. Do not blame your past for your present decisions. What has happened in your past might be unfortunate, but it is your responsibility to make a change.

3. Take 100 per cent responsibility for every element of your life.

4. Stop worrying about what other people think of you. Lots of people will have an opinion whether you’re doing well or terribly.

5. Get creative with your goal setting methods.

Stacey says she wasn’t able to visualise the life she wanted because she had never seen or experienced it.

Instead, she visualised a life she didn’t want and worked backwards.

‘Eliminate the things you don’t want, and what you’re left with should be what you want,’ she explained.

During this period, Stacey began mingling with the wrong crowd, partying and making reckless decisions.

By 21, she was pregnant again and in an abusive relationship, which she still struggles to open up about to this day.

Her ‘wake up call’ came when her youngest son, Jack, was admitted to hospital. Child protection services were waiting to take her three children away to place them into care.

After lengthy and exhausting discussions, Stacey was given two options; leave her friends and relationship behind and keep her children, or keep going on the same path but hand her children over to have a better life.

There was no choice for Stacey, but she was terrified by what it meant.

‘How can you expect someone to aspire for a better life and to work toward a better life when they can’t even comprehend what that looks like?’ she said.

‘I didn’t know that my life was so shocking. It was just normal. There was nothing else.’

Stacey said part of the process of figuring how to get ahead was removing her dad from her life temporarily.

He never drank, didn’t do drugs and wasn’t abusive, but he loved Stacey too much and accepted her poor choices.

‘I was just repeating a cycle my family had experienced for generations,’ she said.

After six weeks of intense therapy and involvement from authorities, the court ordered that Stacey could keep her children. 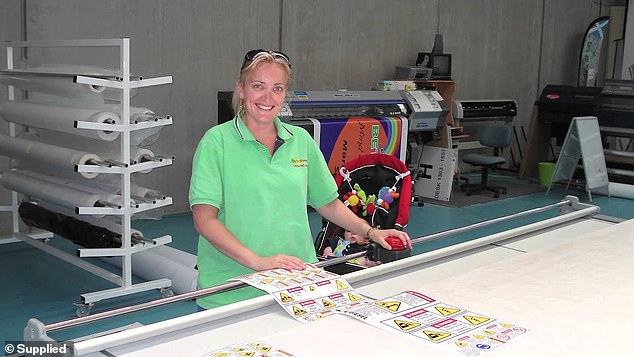 Turning her life around

At 22, Stacey earned her first full-time wage at an office job in Melbourne.

The owner, Cliff Stephens, agreed to take her on after she repeatedly asked him for a chance.

‘He was the first man in my life who ever treated me with complete respect,’ she said.

Cliff took her under his wing and coached her through the ranks, encouraged her to start saving for a house deposit no matter how impossible it seemed and inspired her to create a stable routine for herself and her three children.

She started casually dating a man named Dave from the office, who terrified her because he seemed too good to be true after the men she’d been exposed to up until that point.

Stacey felt as though she’d finally found her footing after a life living on the edge, but a suicide attempt by one of her sons caused her to reconsider everything. 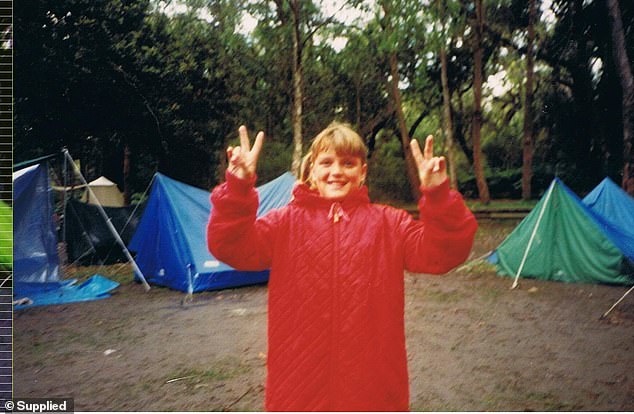 Stacey loves the memories she has of her childhood, despite acknowledging it was chaotic and unconventional 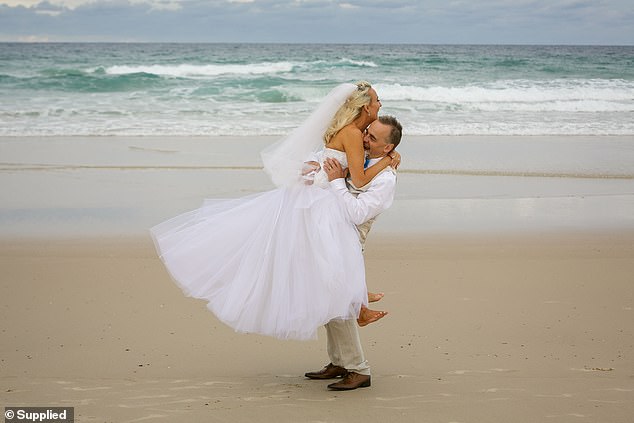 ‘I thought I’d have to leave my job,’ she said.

‘Go back onto benefits so that I could watch him full time.’

After mulling over her options, Stacey consulted Dave with a business proposition.

He printed stickers for himself personally, but it was Stacey who encouraged him to turn his hobby into a successful printing business.

Now, more than a decade on, the couple still run the same company and Stacey is also a highly sought after keynote speaker.

They live in Melbourne with their five kids – Josh, Tahlia and Jack from Stacey’s previous relationships and Toby, 12, and Renee, 11, whom they share together.

During the Covid lockdown, Stacey wrote a book sharing her life experiences and the simple tricks she used to overcome every challenge.

‘It’s a bible for my boys,’ she admitted.

‘I never cared if it would be published, I just wanted them to have it in case anything happened to me. It’s basically all my answers to the three or four calls I get from them each and every day.’

Stacey’s biography and self help book is available to purchase in store and online now, and retails for $32.99. 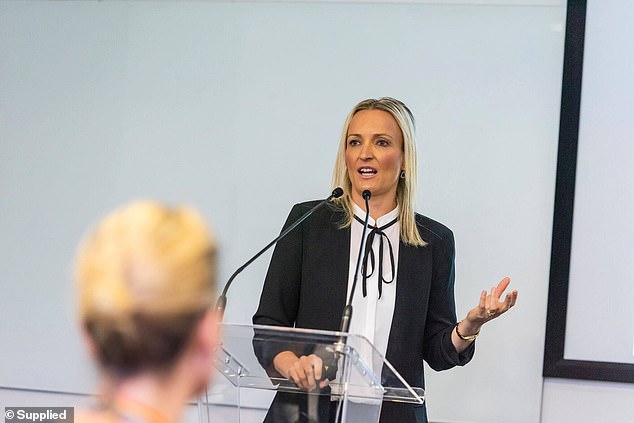 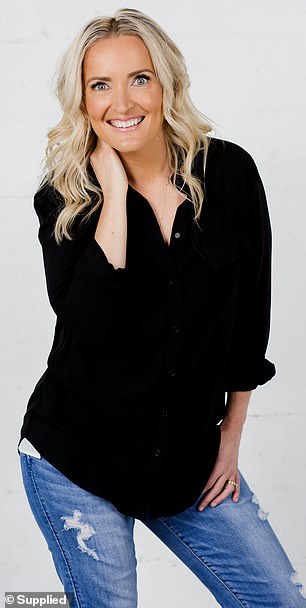 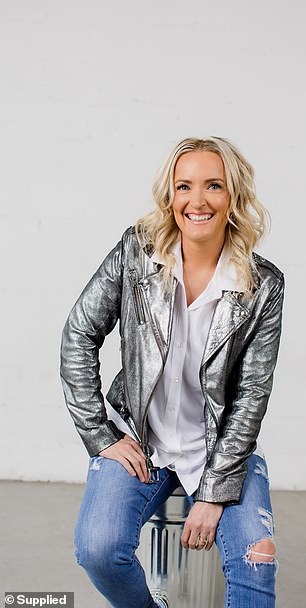 During the Covid lockdown, Stacey wrote a book sharing her life experiences and the simple tricks she used to overcome every challenge

Stacey’s book features 17 chapters, each focusing on a different element of her life and her advice on overcoming hardship.

The mother-of-five says people must say ‘good riddance’ to these key elements of their lives, and offers advice on how to do just that: