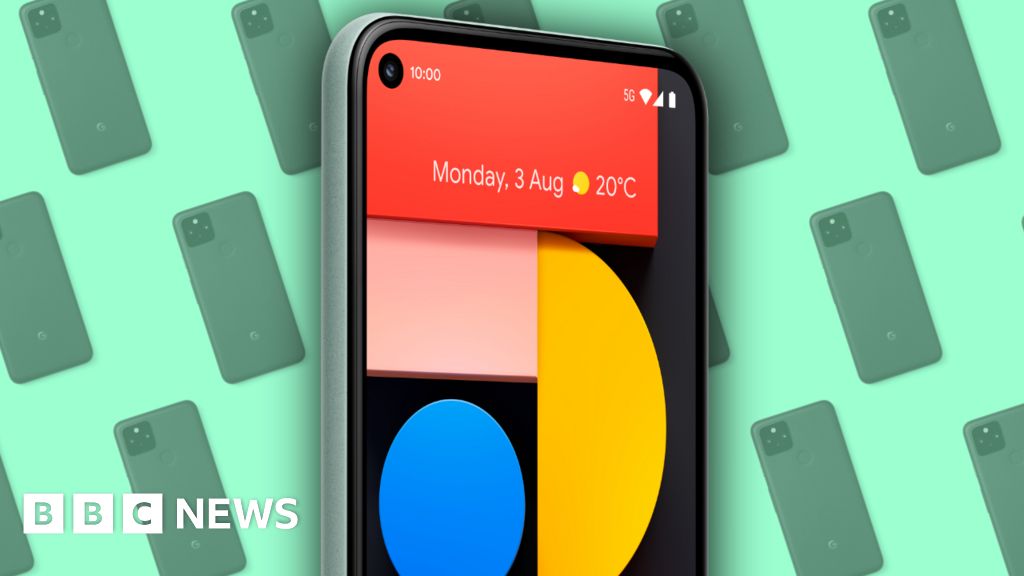 Google’s hardware chief has said its new flagship smartphone was designed to go on sale during an economic downturn.

As a result, the Pixel 5 has abandoned some of its predecessor’s headline features and runs on a slower chip in order to be sold at a lower price.

However, it does gain 5G connectivity and some new photography capabilities.

Experts say it will face tough competition from other mid-range Android handsets, but the included bundle of Google services could help.

“To not bring to market a true flagship demonstrates Google is now thinking about the market in a very different way than it was last year,” commented Ben Stanton from the tech consultancy Canalys.

“And on a price-specs basis alone, Google will probably lose to Samsung and Chinese competitors.

“Its key selling point, however, remains that it offers a stock Android experience with superfast updates.”

This is a reference to the fact that many other Android device-makers layer their own proprietary user interfaces on top of Google’s operating system, and typically take longer to offer software updates.

Google also unveiled a 5G-enabled version of its existing Pixel 4a, which will cost £499.

Smartphone designs are typically locked in place many months before the products go on sale, in order to secure the required components and carry out tests.

Google’s senior vice president of devices and services acknowledged that the Pixel 5’s features had been decided upon before the coronavirus pandemic began.

But he said a deliberate choice had been taken to offer a 5G-capable phone at “an affordable price”.

“What the world doesn’t seem like it needs right now is another $1,000 phone,” said Rick Osterloh.

“Obviously nobody anticipated the pandemic, but we actually did think that the world was possibly headed for an economic downturn… and it only further emphasised our point of view that this is the right thing.”

Tech jettisoned from the Pixel 4 includes the Soli radar chip, which Google had taken five years to develop. It automatically turned on the older phone’s screen when its owner approached and allowed gesture controls.

Last year’s face-unlock sensors have also been ditched, with a return to the Pixel 3’s fingerprint sensor on the back of the Pixel 5.

“These technologies will be used in the future, but they’re very expensive,” Mr Osterloh said.

slower and having lower graphics-processing performance than last year’s Snapdragon 855, although Mr Osterloh said he did not believe consumers would notice.

The device does benefit from some improvements, including being able to produce a shallow-focus effect in “super low-light conditions”.

One of its rear cameras now has a wider angle lens than before. And there are a choice of new video stabilisation modes.

In addition, the RAM memory has been boosted to 8GB, which should help the phone switch from task-to-task more quickly.

And Google is bundling some of its subscription services including three months of its games-streaming platform Stadia and 100 gigabytes of online storage.

“But cloud gaming is still ‘early’ tech for mobile.”

The Pixel 5’s competition will include Samsung’s Galaxy S20FE and the forthcoming OnePlus 8T – which are also being targeted at the “mid-market”.

Google shipped 4.6 million Pixel smartphones over the 12 months leading up to July 2020, according to research firm IDC.

That marked a 37% drop over the same period a year earlier. However, a wider fall in demand for smartphones meant the brand still rose from being ranked 16th to 12th in terms of market share for the final quarter of each period.

Google is the second best-selling smart speaker brand in Western markets. But it is still forecast to sell about a third of the number of Amazon’s Echo speakers in the UK this year, according to research firm eMarketer.

Google also showed off a new version of its television-streaming dongle, which is now called Chromecast with Google TV.

Unlike its predecessors, the device comes with its own remote control, which allows users to control their TV and soundbar via its buttons or voice commands as an alternative to using a smartphone app.

It also brings together movies and TV shows from the various apps each user subscribes to in order to make its own recommendations. The Apple TV set-top box and Amazon’s latest Fire TV stick both offer similar functions.

More on this story

UFC 257 – Poirier v McGregor 2: I want my highlights reel to be like a movie – McGregor