Google’s ‘Heads Up’ tool aims to reduce texting while walking


A new feature from Google called ‘Heads Up’ aims stop ‘smartphone zombies’ from staring at their handsets while walking.

Heads Up uses your phone’s motion sensors to detect that you’re moving and your location to know if you’re walking indoors or outdoors.

If it detects that you’re moving while your phone screen is on, it sends warnings like ‘look up’, ‘look ahead’, ‘stay focused’, ‘watch out’ and ‘be careful’.

Using your phone while walking can lead to trips and dangerous collisions with objects and other pedestrians – or even road traffic.

Careless smartphone addicts who are constantly glued to their devices can put other road users’ lives at risk, as well as their own. 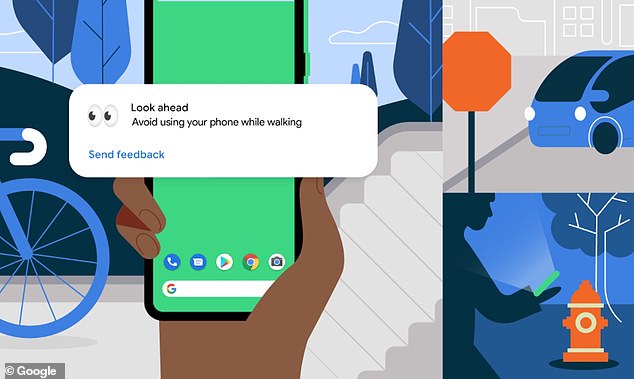 Alerts from the Digital Wellbeing app when Heads Up mode is activated:

Heads Up is being tested in beta (prior to an official release) on Google’s Digital Wellbeing app – but is only available for Google’s own Pixel phones.

However, the feature is likely to roll out to other Android phones after this initial beta test.

‘If you’ve ever tripped on the sidewalk or walked into a pole while texting, you’re not alone,’ said Google community manager Camille Vogl in a post on the Google support page.

‘Heads Up is a new Digital Wellbeing feature that helps remind you to be aware of your surroundings while you’re on the move.

‘If your phone screen is unlocked and you’re walking, you’ll receive a gentle nudge to look up and pay attention to what’s around you.’

The tech giant isn’t suggesting smartphone users should rely solely on the new feature to keep safe, however.

‘Please always use your best judgement, and use this feature as a gentle reminder when you do find yourself distracted while walking,’ said Vogl. 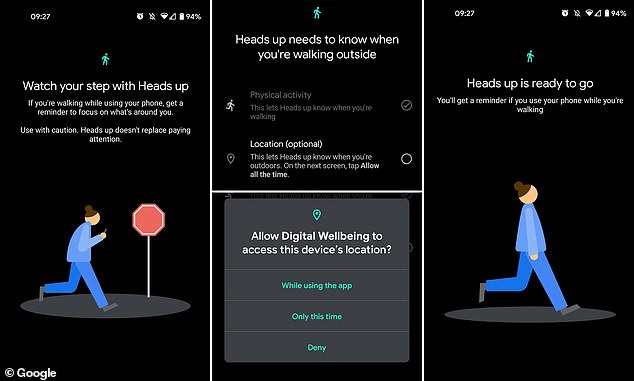 Screenshots from Heads Up. Users can chose whether or not to give the feature access to their location

To use Heads Up, Pixel users need to join the beta program in the Digital Wellbeing app.

To activate Heads Up, tap on ‘Digital Wellbeing & parental controls’ under Settings and then tap the option for Heads Up.

At this point, you’ll have to grant permission to track your physical activity, so Heads Up knows when you’re walking outside.

Giving the feature the ability to track your location, meanwhile, is totally optional.

‘Location permission is optional but makes for a better experience by identifying situations that are more likely to be hazardous and require your attention,’ said Vogl.

Heads Up is triggered when walking, and if you have granted the location permission, then it will also take into account whether or not you’re outdoors.

It should also work while jogging or running, since your phone’s motion sensors will detect that you’re moving.

Google said it’s aware of ‘the safety and wellbeing-related benefits of not using our phones while walking’.

Being engrossed in texting and social media has led to people walking into lampposts, stepping out into traffic and tripping over.

Texting and scrolling on touchscreens has sent pedestrian injuries soaring by a whopping 800 per cent, a study published last year found.

Up to 45 per cent of pedestrians are distracted by their phones when crossing the street in busy cities, the research suggested.

The scientists behind the study, from the University of Calgary in Canada, said related injuries are likely to get worse.

They already account for around one in every 25 road safety incidents, the team wrote in the journal BMJ Injury Prevention.

HOW SEVERE IS SMARTPHONE ADDICTION?

With the average age for a child to get their first phone now just 10, young people are becoming more and more reliant on their smartphones.

Worrying research from Korea University suggests that this dependence on the technology could even be affecting some teens’ brains.

The findings reveals that teenagers who are addicted to their smartphones are more likely to suffer from mental disorders, including depression and anxiety.

Other studies have shown people are so dependent on their smartphone that they happily break social etiquette to use them.

Researchers from mobile connectivity firm iPass surveyed more than 1,700 people in the US and Europe about their connectivity habits, preferences and expectations.

The survey revealed some of the most inappropriate situations in which people have felt the need to check their phone – during sex (seven per cent), on the toilet (72 per cent) and even during a funeral (11 per cent).

Nearly two thirds of people said they felt anxious when not connected to the Wi-Fi, with many saying they’d give up a range of items and activities in exchange for a connection.

Goldman Sachs’ profit and revenue jump to a record high in fiscal Q1.

Goldman Sachs’ profit and revenue jump to a record high in fiscal Q1.