Joe Biden is facing potential conflict of four fronts as he focuses on Russia’s invasion of Ukraine but is being tested by North Korea, China and Iran.

The embattled president is considering deploying up to 50,000 US troops to Eastern Europe to ward off Russian aggression.

But as the issue consumes his time, energy and soon military forces, America’s arch-foes appear to be testing him.

North Korea launched two cruise missiles tests on Tuesday, for the fifth time this month in a huge ramping up of their efforts.

Iran-backed rebels launched a  rocket attack on an air base housing 2,000 US soldiers on Monday, forcing Patriot defense system to swing into action.

Two inbound missiles were knocked out of the sky.

And China is testing US resolve over Taiwan and  free passage through the South China Straits to the extent that the US has deployed two aircraft carriers to the area to ensure that Beijing does not try to exploit the potential Ukraine invasion.

The USS Carl Vinson and Abraham Lincoln as well as a huge strike group are now on patrol in the South China Sea.

Embarrassingly, an F-35 stealth fighter crashed on landing on Monday and fell into the sea. The pilot ejected and seven sailors were injured.

Now there is a race to recover the state-of-the-art jet before Beijing gets to it.

Meanwhile, Biden’s approval rating hit another grim record on Tuesday with a new poll placing him with just 39 percent of voters’ support.

A separate survey suggested the president has lost the faith of Americans who largely think he does not care about them and is a weak leader, both dire outcomes just a year after he took office.

The under pressure president was forced to apologize to a reporter last night after he was caught calling him a ‘son of a b***h’ on a hot mic. 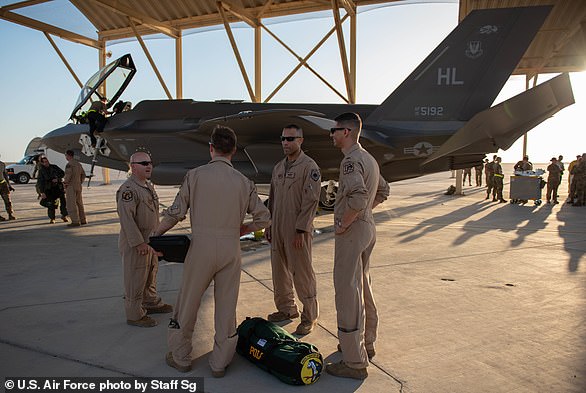 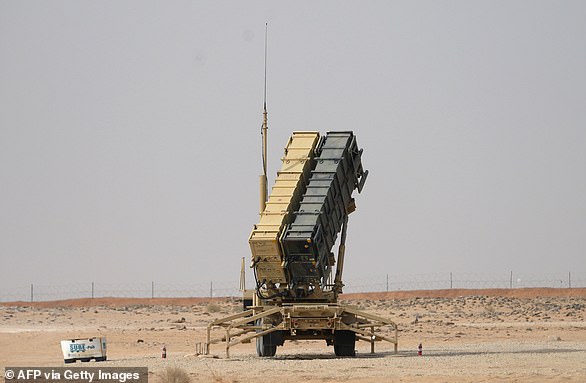 US military officials deployed the Patriot missile defense system, pictured above, to stave off the attacks

At a meeting last week, which Kim attended, North Korea suggested it might restart tests for long-range and nuclear weapons, describing the threat from the U.S. as one the nation could no longer ignore.

Meanwhile, the U.S., together with the UAE military, was able to prevent two inbound missiles from hitting the air base.

The Iranian back-rebels said that the missiles were aimed at the Al-Dhafra Air Base in Abu Dhabi, where the U.S. Air Force’s 38th Air Expeditionary Wing is based, and 2,000 military and civilian personnel are stationed.

The attack signaled a marked escalation in tensions. It was the second in a week aimed at the UAE, which is part of a Saudi-led coalition backing the Yemeni government that has been at war with the Iranian-backed Houthi rebels for years.

The U.S. too has backed the Saudi-led coalition since the start of the conflict.

The Houthis have said they are retaliating agains the gulf state for backing militias thwarting their efforts to capture oil-producing regions in Yemen.

The Houthis have long launched attacks on Saudi Arabia, but the UAE has until recently served as a safe haven in the region.

State Department spokesperson Ned Price said the attack was a ‘troubling escalation’ of violence, and the department issued a rare security advisory warning Americans in the UAE to ‘maintain a high level of security awareness.’

Biden has faced growing pressure to designate the Houthis as a terrorist group. Nine GOP senators introduced legislation calling on the White House to reimpose the terrorist designation after the last fuel depot attack, and some Democrats reportedly see wisdom in the move.

Iran, via proxies, has launched a series of attacks targeting the U.S. presence in the Middle East in recent weeks.

Since the start of the year, Iranian-backed groups have launched drone and missile attacks aimed at U.S. forces in Iraq, following the second anniversary of the U.S. strike that killed Iranian Gen. Qassim Soleimani and Iraqi militia commander Abu Mahdi al-Muhandis.

Days before that, a series of attacks targeted American troops in Iraq and Syria. Rockets struck an Iraqi military base hosting U.S. troops in western Anbar province and the capital.

The Chinese launched a show of force by flying dozens of warplanes near Taiwan on Sunday, just as the U.S. sailed two aircraft carriers and a pair of amphibious assault ships alongside allies in the South China Sea. 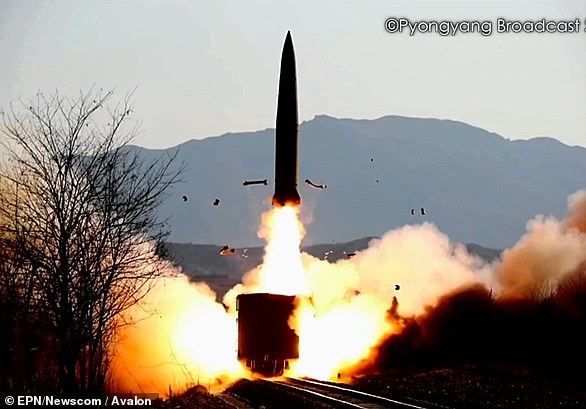 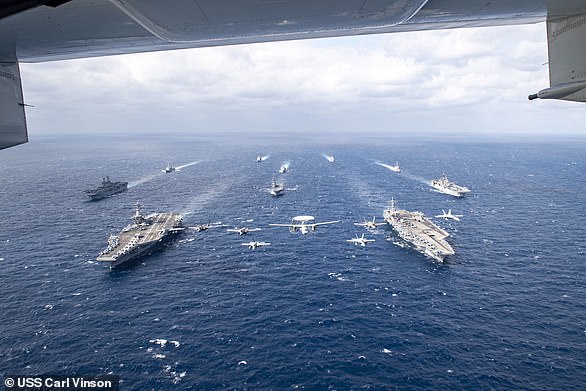 The U.S. sailed two aircraft carriers and a pair of amphibious assault ships alongside allies in the South China Sea 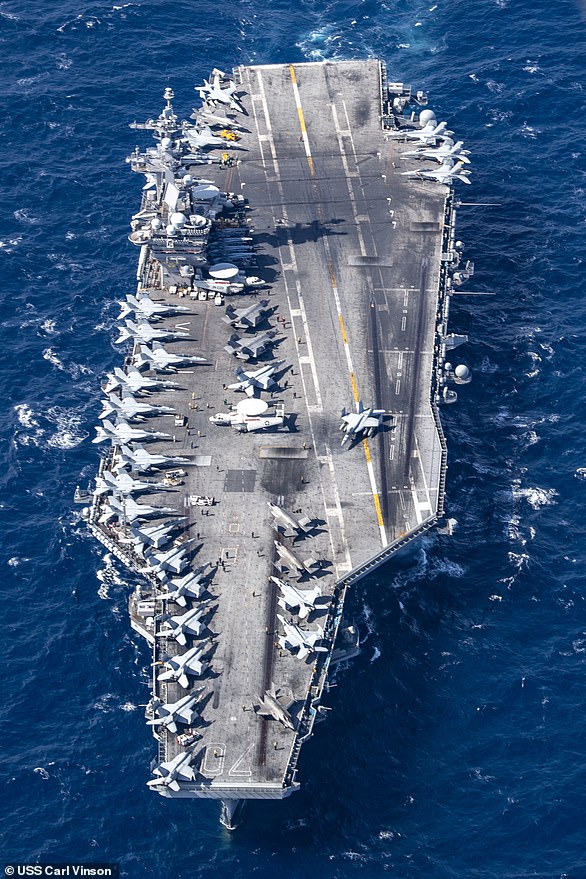 Seven U.S. sailors were injured Monday during a ‘landing mishap’ by a F-35 Joint Strike Fighter Jet aboard the USS Carl Vinson in the South China Sea

China claims Taiwan as part of its territory while the island democracy claims its own sovereignty. The two territories split in 1949. The U.S. does not formally recognize Taiwan but supports its democratic government.

Beijing has renewed its encroachment on the territory in recent months, and President Xi Jinping has called for a ‘peaceful reunification.’ Xi has sent dozens of warplanes near Taiwan’s defense zone.

But Biden’s main focus has been on escalating tensions between Russia and Ukraine. Vladimir Putin has amassed 100,000 troops at the Ukraine border and is believed to be considering invading the neighboring democracy.

Russia is also due to start its own massive naval exercise later this month involving more than 140 warships and more than 60 aircraft. 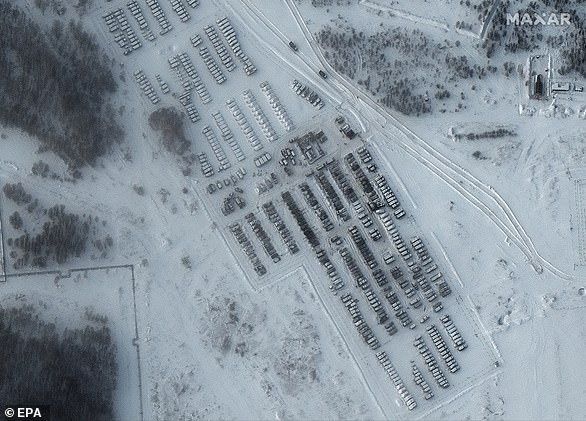 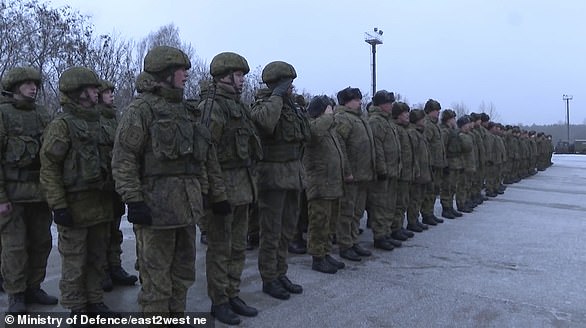 Russian forces arrive in Belarus amid escalating tensions with Ukraine

And in a signal of U.S.-Russia tensions reminiscent of the Cold War, Biden is deploying the USS Harry Truman to the Mediterranean Sea, deploying the ship under NATO control for the first time since that era.

On Monday the U.S. informed 8,500 troops at home to be ready to deploy to Eastern Europe if the need arises.

Biden is considering deploying up to 50,000 US troops as well as aircraft and warships to eastern Europe to counter a Russian military build-up that has sparked fears Vladimir Putin is about to invade Ukraine.

The plan would see between 1,000 and 5,000 soldiers sent to NATO nations such as Lithuania, Estonia and Latvia, which border Russian territory.

Troop numbers could then be increased up to 50,000 if the security situation deteriorates, backed up by fresh deployments of ships and aircraft.

Pentagon officials presented the plan to Biden during a summit at Camp David over the weekend, convened to discuss military options to deter an attack by Russia after the threat of sanctions largely fell on deaf ears.

The plan would not involve American troops deployed directly to Ukraine, with Biden thought to be loathe to enter another conflict following his disastrous withdrawal of U.S. troops from Afghanistan last year, The New York Times reports.

An NBC News report notes that other options presented to Biden ahead of an invasion were sending bomber flights over the region, ship visits into the Black Sea and moving troops and equipment from other parts of Europe into Poland, Romania and other countries that neighbor Ukraine.

Biden is due to make a call on military measures as soon as this week, the Times detailed, even as high-level talks between Washington and Moscow continue – with the U.S. due to submit a written response to Russian security demands.

The Times claims this presents a change in Biden’s strategy, claiming ‘the administration is now moving away from its do-not-provoke [Russia] strategy.’

And as the president deals with foreign policy crises on all fronts, his poll numbers reflect a lack of confidence back at home.

A January Harvard CAPS/Harris survey found Biden’s job approval at 39 percent, the lowest he’s scored in the poll since sampling first began back in March.

His disapproval rating has climbed to 53 percent, up two points from the previous poll.

Forty-year high inflation and a continuing coronavirus pandemic have left many Americans with little faith in the president’s abilities.

Biden met with European world leaders on Monday in a hastily-announced video call to discuss the worsening situation between Russia and Ukraine.

Leaders from the European Union, France, Germany, Italy, Poland, and the United Kingdom were also on the call, which lasted about 90 minutes, and Biden said there was ‘total unanimity’ about the situation in the Ukraine – although he declined to provide more details on what they agreed upon.

Investor: this big-cap tech stock down 25% is my top pick

Investor: this big-cap tech stock down 25% is my top pick