To many, they’re as important to our landscape as patchworks of fields and dry stone walls. To some they’re works of art and feats of engineering genius.

And to others, they provide opportunities for rewilding and to create greener transport routes.

But the picturesque railway bridges on this page are at risk of being filled in with thousands of tons of unsightly concrete or demolished amid health and safety concerns from road bosses. 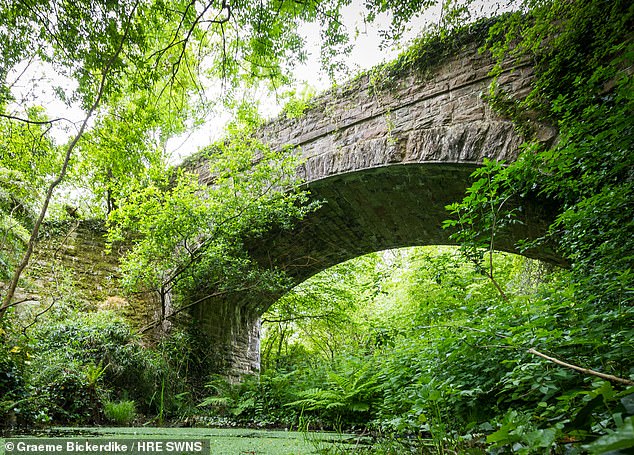 Work of genius: Greeps Bridge near Saltash designed by Isambard Kingdom Brunel is also at risk of being defaced 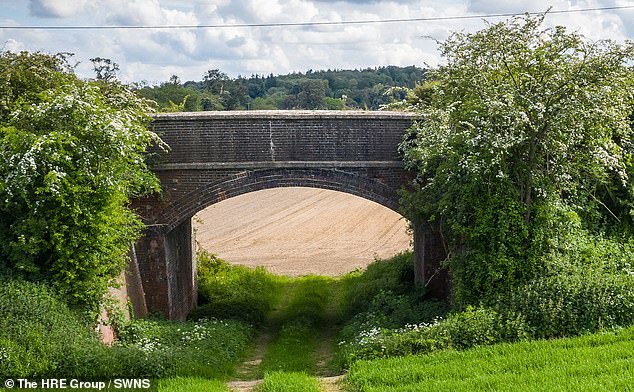 Bridge of sighs: Locals want to use this arch near Newbury to extend a cycle path, but highways bosses say infilling is needed to prevent an accident 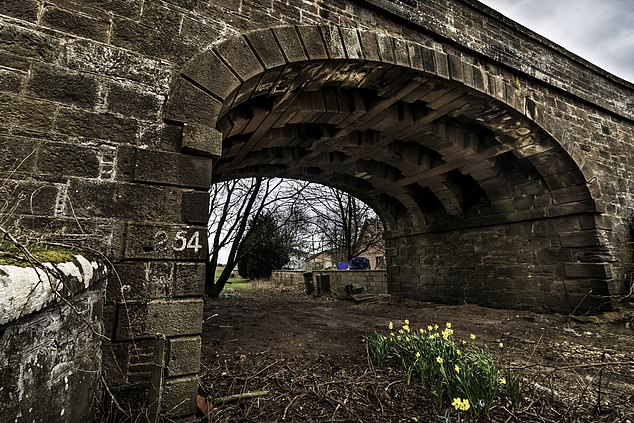 Listed gem: This disused railway bridge at Pugeston, on Scotland’s east coast, is at risk despite plans by campaigners to open a line for tourists and train fans 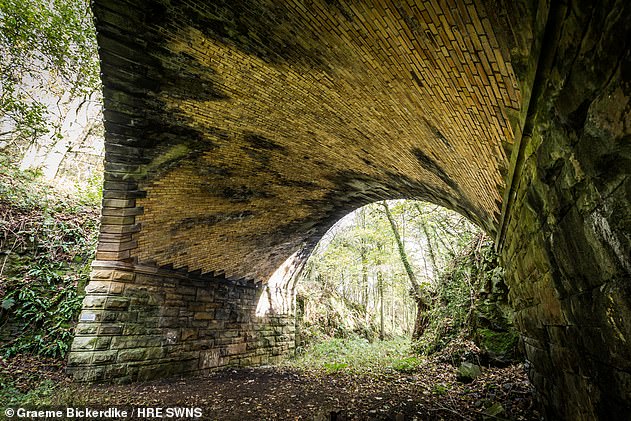 Bad step: The local council wants to build footpaths and cycle ways underneath two bridges near picturesque Alnwick, but infilling threatens to wreck the project

The work, which will cost millions, is being proposed for 69 sites by Highways England – responsible for disused railway arches – even though simply strengthening of the structures would be cheaper.

Last December, Highways England listed 116 structures it intended to fill in or destroy but has since reduced the number.

However, to the anger of campaigners, it has not published a detailed list of those it intends to target and the agency has not specified why it won’t.

Opponents say the work jeopardises plans to reopen old tracks as well as create footpaths and cycle ways or ‘greenways’.

Infilling in Great Musgrave, Cumbria, went ahead at a cost of £124,000 with Highways England claiming it was at risk of collapse if used by heavy lorries.

Locals say the 159-year-old bridge is on a rural B-road rarely used by goods traffic and could have been repointed for £5,000 to increase its maximum weight. 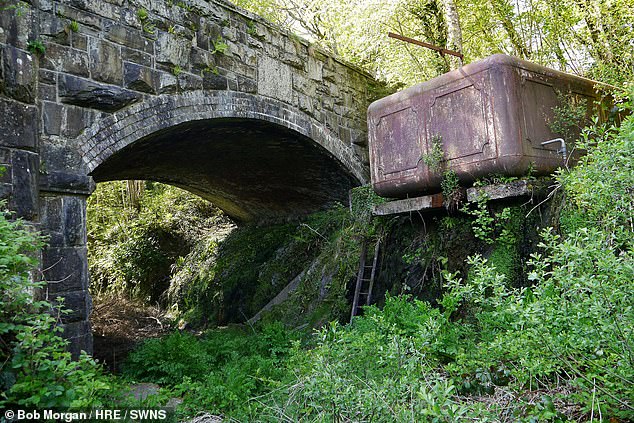 Golden opportunity: Officials want to reopen the former Aberystwyth to Carmarthen line at a cost of £775million – but infilling this bridge halfway along will hinder the project 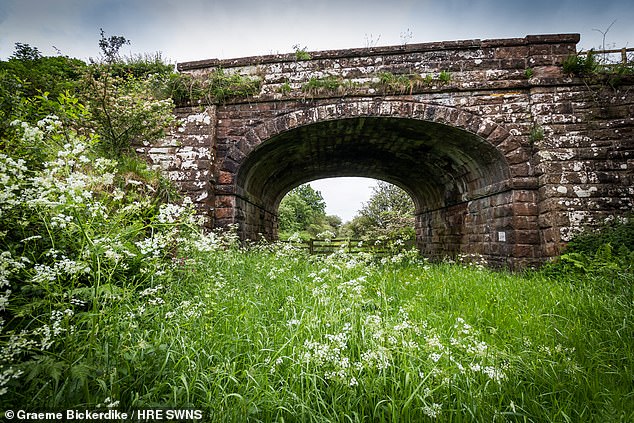 Nature’s highway: The arch at Kirtlebridge, which dates back to 1870, is used as a crossing by wildlife like deer and is a farmer’s only access to parts of his land 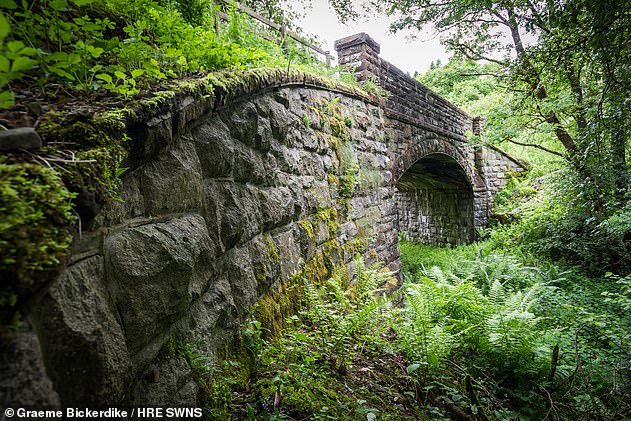 Double blow: The Dumfries and Stranraer line was lost during the Beeching cuts in 1965. Now infilling disrupts new plans to reopen the 73-mile route

Graeme Bickerdike, a member of the Historical Railways Estate Group campaigning to save the structures so old lines can be reused, said: ‘[Highways England] is a government-owned company and yet they are trying to keep their destructive and unjustified assault secret. It’s scandalous and it’s about time ministers stepped in.’

He added: ‘Highways England is replacing fabulous architecture with horrendous mounds of concrete, burying wonderful examples of our industrial heritage.

‘The impact on wildlife is also not a side issue. These bridges span wildlife corridors in what are sometimes remote locations. By infilling, Highways England are damaging the ecology of each area.’

Threatened bridges are thought to include structures on the former Keswick-Penrith railway, Cumbria – despite the Government considering reopening the line built in the 1860s but closed in 1972.

One bridge has been filled in, leaving a narrow tunnel for farm vehicles, while work is set to take place imminently on a second.

Tony Lywood, Labour county councillor for Keswick, said: ‘It’s death by a thousand cuts for the reopening plans. Each thing like this makes it more difficult because it adds to the costs. Highways England are clearly not even considering the proposals to reopen the line even.’

Nearly 300 miles south, the infilling of a bridge at Chilcompton, Somerset, in 2015 still rankles with the Somerset and Dorset steam railway. The work had blocked a planned extension to the line. 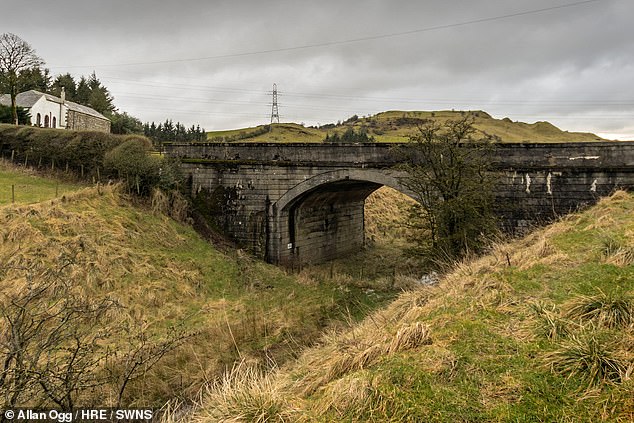 Concrete creation: This rare 1903 arch was made from cement. Locals want to use it to create safer paths for cyclists and walkers, but highways bosses still plan to infill it and two others

Campaigners fear that even one of the last bridges designed by celebrated rail engineer Isambard Kingdom Brunel before his death in 1859 could be under threat.

The bridge, near Saltash, Cornwall, only carries a farm track over a former railway. But in September last year, Highways England wrote to Cornwall Council claiming infilling was needed ‘to prevent an emergency arising’.

John Ball, secretary of the Cornwall Railway Society, said the loss of the bridge would ‘amount to cultural vandalism’. He added: ‘Its destruction is completely unnecessary and a waste of public money. It merits preservation as an historic piece of the nation’s infrastructure, built arguably by our greatest civil engineer.’

At most locations, Highways England is proposing the works as an ‘emergency’ under ‘permitted development rights’ meaning no consultation or formal planning permission is needed.

Highways England – which was handed responsibility for disused railway structures across England, Wales and Scotland in 2013 – says infilling is a ‘last resort’.

It was too late to save these arches

Eyesore: Campaigners are furious that this historic bridge in Chilcompton was wrecked in 2015 by unsightly concrete infilling

Tory MP Huw Merriman, chairman of the Transport Select Committee, wrote to Highways England in April saying: ‘We urge Highways England and the Department for Transport not to view the estate primarily as a risk to be minimised, but rather as assets to be preserved and enjoyed.

‘We understand the average cost of infilling is around £145,000 per bridge, whereas the costs of strengthening historic bridges can be much lower.

‘We would like to know why it is better use of public money to infill, rather than strengthen, the bridges.’

Highways England said it only intended to demolish 15 bridges, while adding that infills ‘are built in a way that allows for them to be reversed should organisations become interested in the structures future use’.

But campaigners argued that reverting it causes significant difficulty and could cost a seven-figure sum.