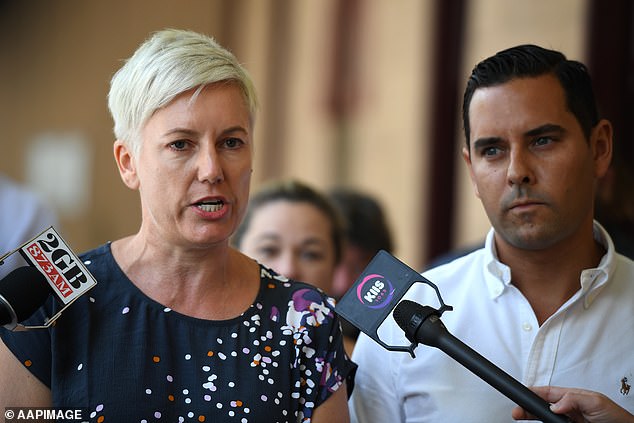 The NSW Government has shot down a bill pushed by the Greens that would allow families to grow up to 12 cannabis plants in their homes.

The controversial bill was introduced to the upper house in state parliament on Wednesday by Greens MP and drug law reform spokeswoman Cate Faehrmann.

The bill would legalise recreational and medicinal marijuana in NSW instead of making possession punishable by fines and jail.

But Attorney-General Mark Speakman made it very clear the government would block the proposed law, which would potentially add $2billion to the economy.

‘The NSW Government does not support the decriminalisation of illicit drugs,’ he told Daily Mail Australia.

Greens MP and drug law reform spokesperson Cate Faehrmann, who has been a vocal critic of the NSW government’s zero-tolerance drug policy

Pictured: Cate Faehrmann with a worker at Bello Hemp Store in Bellingen, northern NSW, in December

He added that the state government would respond to the bill formally when it was brought forward for debate this year.

Users would be allowed to start cannabis social clubs where members could grow six plants each, or up to 99 plants in total for everyone in the club.

Ms Faehrmann, who has been a vocal critic of the government’s zero-tolerance policy for illicit drug use, said one in three Australians have used marijuana.

‘Prohibition has well and truly failed and governments all around the world are finally accepting this fact,’ she said.

‘We’ve seen legalisation in Canada, Uruguay, and parts of the US and elsewhere and the sky hasn’t fallen in.’

The ACT Government decriminalised the personal use of cannabis in September 2019, allowing adults to have up to 50g and grow up to two cannabis plants per person, with a maximum of four per household.

But over the border in NSW, anyone caught with the drug faces up to two years in jail, and people growing fewer than five plants face a maximum of 10.

Anyone caught with marijuana in NSW faces up to two years in jail, while people growing less than five plant face a maximum of 10 (stock image of a marijuana plant)

The Greens cannabis bill will be introduced to the upper house in NSW Parliament on February 17.

If passed, households with two people would be allowed to grow six cannabis plants.

Households with with more than two people could grow up to 12 plants.

All cannabis products would be labelled with health warnings and information about the specific strain.

The amount of THC and CBD (the chemicals that produce a ‘high’ sensation) would also be clearly marked.

A NSW Cannabis Authority would be established to regulate the market and stop large corporations from taking over.

People with past cannabis convictions would be cleared.

‘Decriminalisation is better than prohibition, but it is still making thousands of people come into contact with the black market. This is not only crazy but it’s dangerous,’ Ms Faehrmann said.

‘The fact is cannabis poses much less harm to individual users and to our society compared to alcohol, tobacco or many prescription drugs.’

She said the Greens bill would ensure cannabis products were labelled with the strain, THC and CBD levels, and include health warnings.

Retailers would also be required to check ID and refuse service to anyone under 18, ‘unlike drug dealers’, the MP added.

In 2018, the federal parliamentary budget office found that taxing and regulating cannabis would provide $2billion to the Australian economy each year.

Cannabis oil became available at Australian pharmacies a few weeks ago without the need for a prescription, special approval or a referral.

Low-dose cannabidiol, a derivative of marijuana, does not get users ‘high’ and provides unparalleled pain relief.

Laboratory studies by researchers at University of Queensland’s Institute for Molecular Biosciencehave also shown synthetic cannabidiol can kill bacteria in diseases such as gonorrhea, a sexually transmissible infection.

The research has been hailed as a potential world medical breakthrough, amid predictions drug-resistant infections could result in 10 million deaths worldwide a year by 2050 unless an alternate treatment is found.

One doctor estimated it will be 10-15 years before it becomes an approved antibiotic if further trials are successful.