A grandfather-of-three has claimed he was swarmed by 300 bees and stung as he blasts the couple next door for keeping five colonies in their garden.

Retired farmer Steve Chandler, 71, has lived with his wife Ann, also 71, in the Kent village of Sissinghurst for the last 36 years.

He said his neighbours of five years, Dee Heyward-Ponte, 47, and her husband Christian, 48, have driven them to his wits end with their bee colonies.

The couple, who are members of the British Beekeeping Association, had five hives filled with the insects in their back garden last week.

Mr Chandler said his daughter was ‘quite badly stung’ while they were outside gardening and complained his right to use his garden has been taken from him.

He added: ‘We had about 300 bees all over us, there were all in our hair, we had to come indoors, we couldn’t stay out there.’ 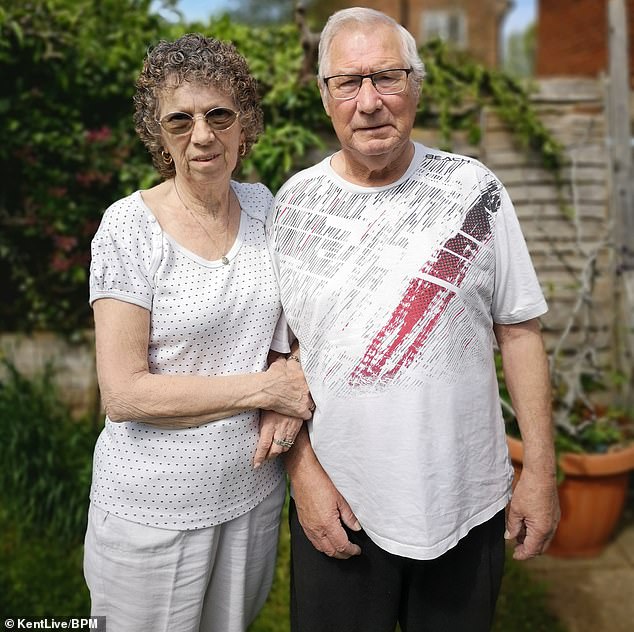 Retired farmer Steve Chandler, 71, has lived with his wife Ann (pictured together), also 71, in the Kent village of Sissinghurst for the last 36 years 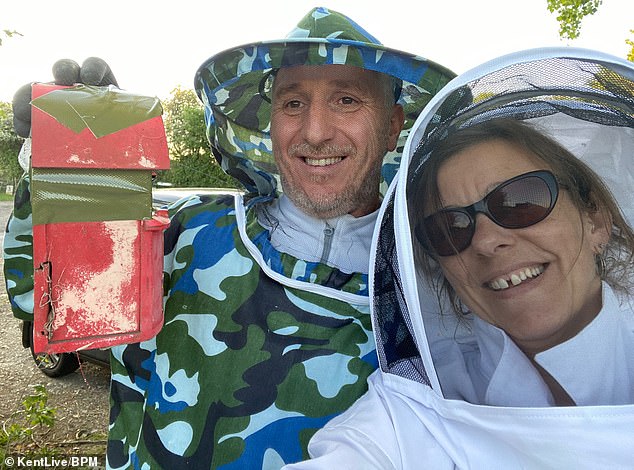 He says his neighbours of five years, Dee Heyward-Ponte, 47, and her husband Christian (pictured together), 48, have driven him to his wits end with their bee colonies

Mr Chandler described ‘using bees as weapons so you can’t use your garden’ as ‘a bit out of order’ and complained his local council was not taking his complaints seriously.

He added: ‘I tried to phone them yesterday and they put me through to the environment agency and they weren’t interested.’

His neighbours say they were forced to take on the colonies when swarming season resulted in a high number of calls.

Mrs Heyward-Ponte said it was ‘a little bit out of control’ because people kept needing bees to be rescued.

She said: ‘So, we had two small hives in the back garden but then swarm season came around and we were rescuing swarms from places and extracting bees.

‘In the space of about a week, we suddenly had another three colonies of bees in our back garden. We fully intended to move them out of the garden to different locations where we keep our bees in the local area. 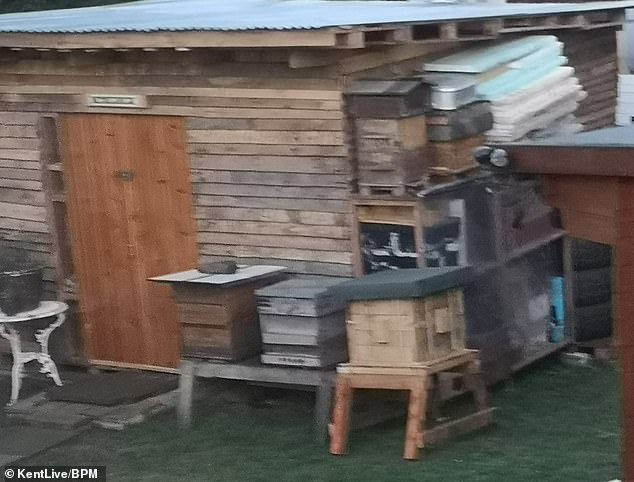 His neighbours say they were forced to take on the colonies when swarming season resulted in a high number of calls. Pictured, the bee hives

Mr Chandler, who worked on a hop and food farm near Sissinghurst castle for four decades, said his neighbours were ‘so unpleasant’ and ‘not very nice people’ when he confronted them about the problem.

He said: ‘The bees have been put there deliberately so we can’t use our garden, those bees don’t need to be there. This is unnecessary harassment as far as I’m concerned.’

Mrs Heyward-Ponte revealed she didn’t realise there were any issues until Mr Chandler ‘crawled over the fence’ to speak to her.

She said: ‘He never said a single thing to us until Saturday morning and he was all frantic and angry.

‘We said to him we were really sorry and we explained to him what had happened and that we were planning to move them that weekend. 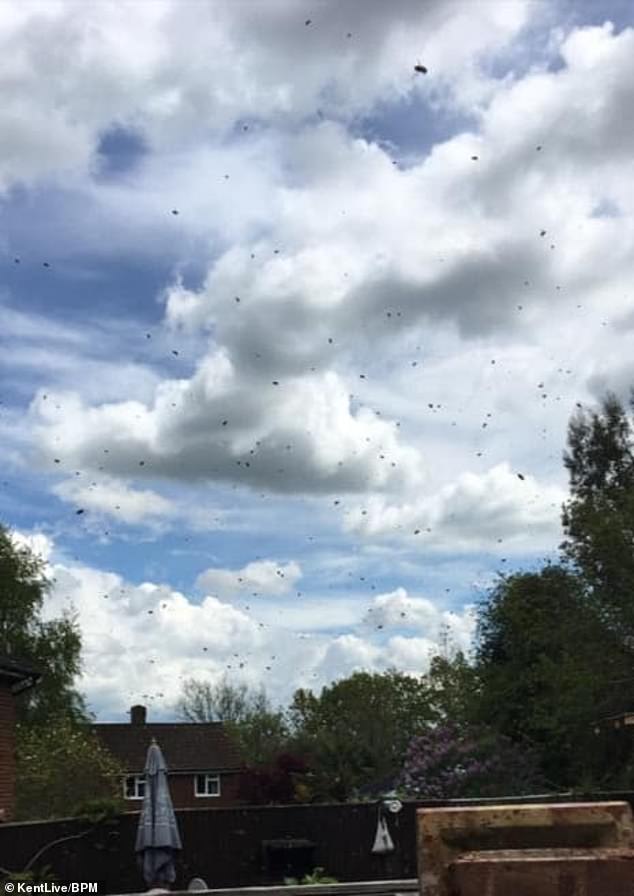 Mrs Heyward-Ponte and her husband have spent the last two years rescuing bees and had five colonies in their garden on May 27, when Mr Chandler said he was swarmed. Pictured, the bees

‘We said to him, look if we knew it was a problem for you, we would have moved them ages ago.’

Mr Chandler has complained he can only use half his garden during the day and has to wait for nightfall, when the bees have gone, to mow the lawn.

Mr Chandler said he was stung by a bee but ‘fortunately had a blue shirt on and it only just penetrated my skin’.

He said: ‘I’ve retired now, I want to use my garden, I don’t want to be running in and out of doors because of bees.

‘I can’t go out and do it now because they’ll sting you to death. My rights have been taken away from me and why should it be.

‘I’ve got a 15-month-old grandson and I’ve got my daughter’s two children who are 18 and 14 and they’re both autistic, so if the bees flew around them they’d go ballistic, they have to stay indoors.’

Mrs Heyward-Ponte and her husband have spent the last two years rescuing bees and had five colonies in their garden on May 27, when Mr Chandler said he was swarmed. 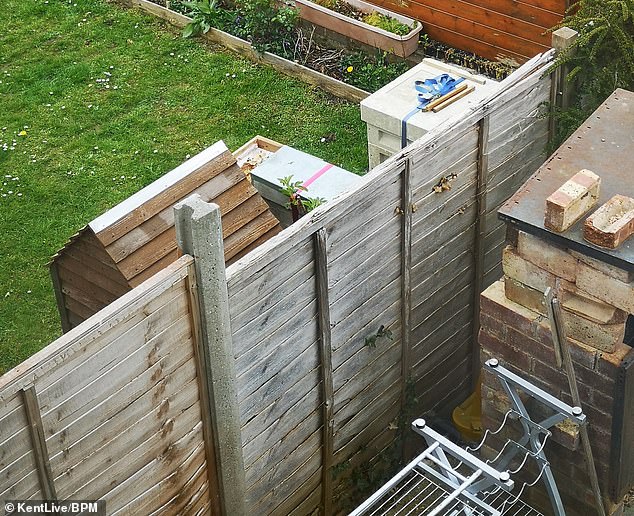 Mr Chandler said he was stung by a bee but ‘fortunately had a blue shirt on and it only just penetrated my skin’. Pictured, the bee hives

She said: ‘We had five [colonies] on Friday (May 28) and we were planning on moving them out of the garden on the Bank Holiday weekend and move them off to the farms and just keep one there that is struggling to create itself a queen.

‘We had bees last year in our garden and one of our colonies did swarm into their garden and they were perfectly fine about it.

‘We went straight round there, we hoovered them up, moved them over,nobody got stung, we gave them a jar of our honey. It was all very amicable.

She said her neighbour confronted her the next day about the bees swarming in their garden.

‘He said that our bees had swarmed in their garden, they’d all been stung loads of times, they couldn’t go out there without being stung and they had to get a gazebo with a net all around it.

‘Bear in mind we’re in the garden where all the colonies are and none of us have been stung.

‘I’m not saying he wasn’t stung, it’s quite possible he was stung, but they haven’t swarmed any garden at all because we watch them everyday.’

On May 30, the couple moved most of the bees to local farms and now have one remaining hive that was meant to be moved on Friday, June 4 but it rained.

Opinion: How many teams can reasonably trade for Falcons WR Julio Jones? It may only be a half-dozen

Opinion: How many teams can reasonably trade for Falcons WR Julio Jones? It may only be a half-dozen