Grant Shapps today held out the prospect of expending the ‘green list’ within weeks amid calls for France, Spain, Italy and Greece to be added.

The Transport Secretary defended the traffic light system despite fury that it has caused confusion and chaos among travellers.

He urged people to be ‘patient’ rather than booking trips to ‘amber’ rated destinations, pointing out that the roster of places classed as safe to visit is being reviewed at the start of next month.

The entreaties came amid calls for countries such as France, Spain, Italy and Greece to be added to the ‘green list’, with warnings that the UK travel industry is being left behind as Europe reopens.

Despite a series of ministers warning that people should not be going to amber-rated countries for holidays, hundreds of thousands of people have been braving quarantine and testing requirements to go anyway.

And millions more are believed to have gambled by booking trips to popular locations later in the summer.

EasyJet reported an eye-watering underlying loss of £701 million for the six months to March 31 this morning, as lockdowns continued to wreak havoc. And chief executive Johan Lundgren suggested the government was using polls and focus groups to make decisions rather than following the evidence.

‘We have looked at the data that is available and the scientific evidence shows that you have a number of countries in Europe that are now on the amber list that should go into the green list.

‘You can see that that is happening in Europe as we speak. European travel is opening up at large scale.’

However, despite the optimistic words from Mr Shapps it is unclear the basis on which the EU will be willing to receive UK tourists. The bloc’s ambassadors have agreed that people who have received both vaccine jabs should be allowed without quarantine or testing restrictions, but there are doubts over whether that should apply to non-vaccinated Brits. 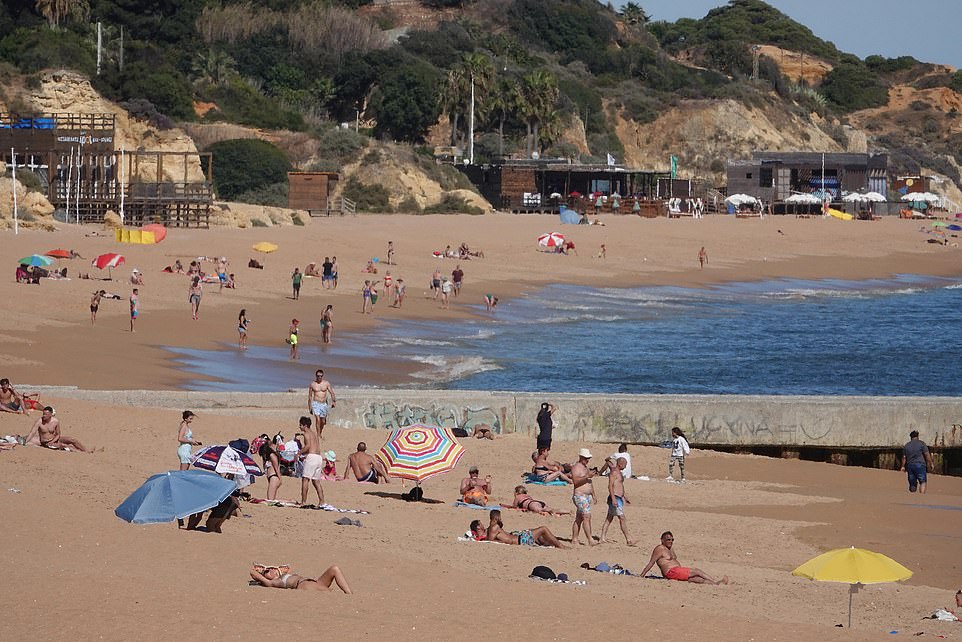 Portugal is currently the only major tourist destination on the ‘green list’. Pictured, Albufeira 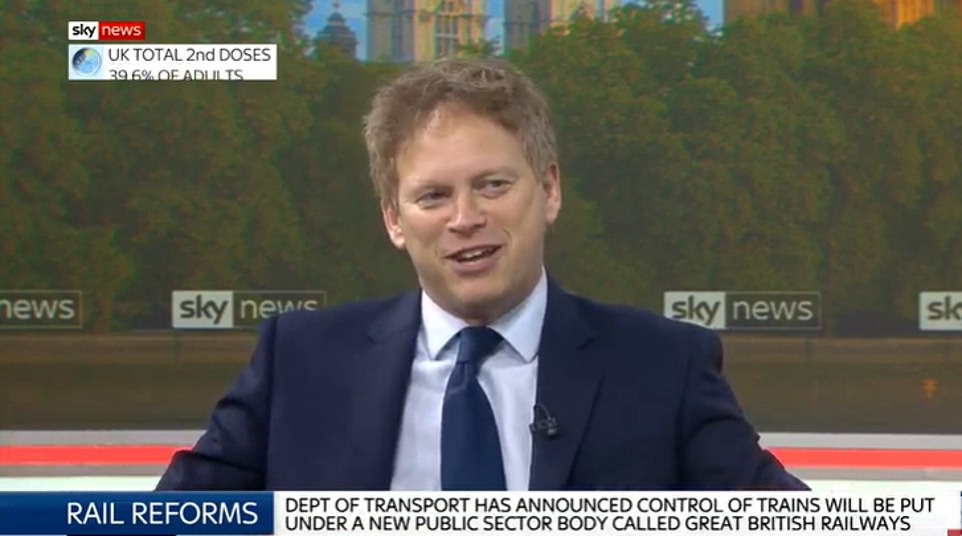 Grant Shapps today held out the prospect of expending the ‘green list’ within weeks amid calls for France, Spain, Italy and Greece to be added 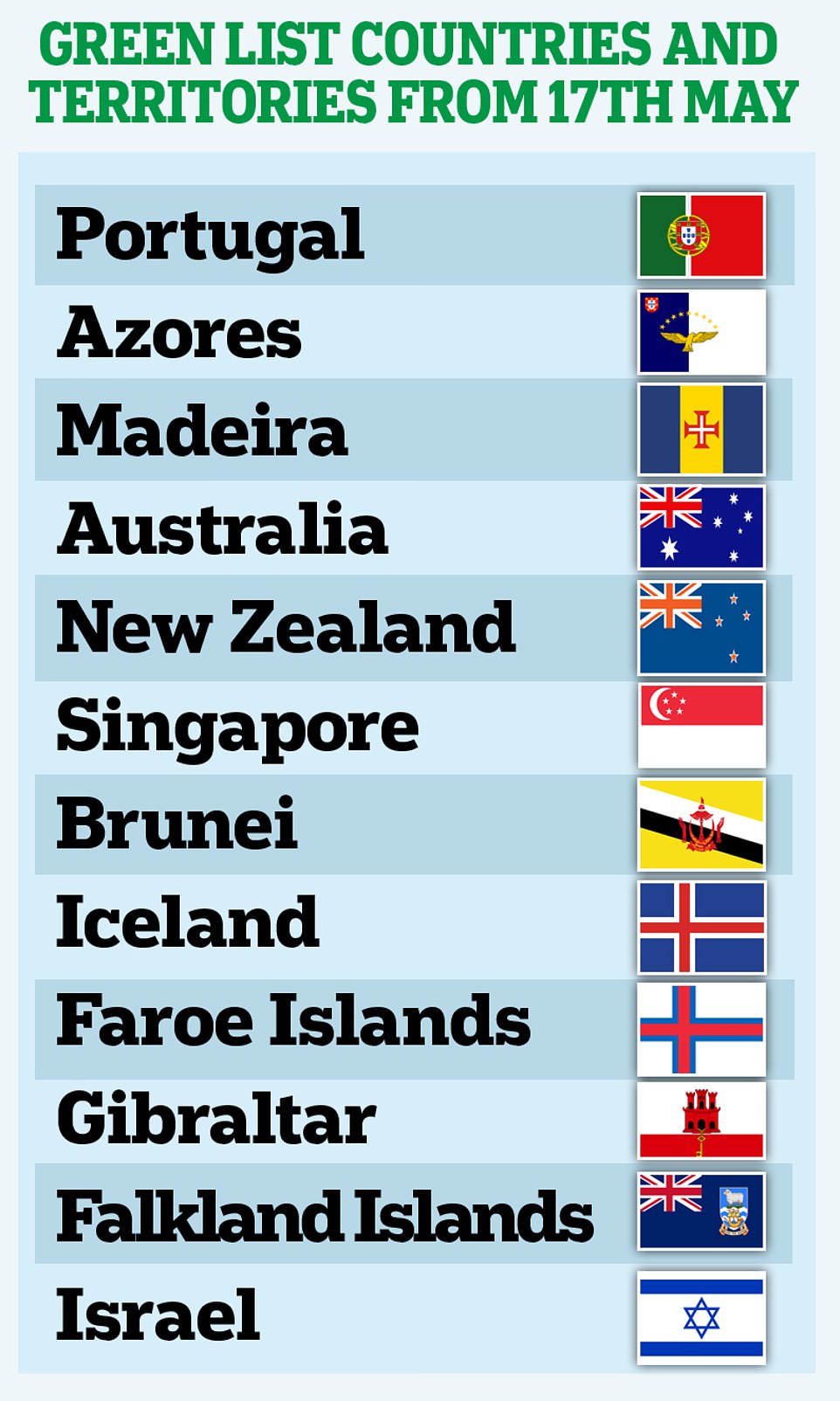 Holiday ‘police’ knocking on your door: Priti Patel reveals plans for up to 10,000 quarantine checks EVERY day

Families should expect a ‘knock on the door’ when they return from abroad, Priti Patel warned last night.

The Home Secretary said enforcement was being stepped up to make sure travellers who visit amber-list countries such as France, Spain and Italy obey the ten-day quarantine rule.

Officials have the capacity to carry out 10,000 home visits a day and 30,000 were conducted last week.

Anyone found to be out when supposedly self-isolating risks a fine of up to £10,000 – although few have been levied so far.

The warning came despite growing optimism of an end to Covid curbs next month and after days of confusion over amber-list countries.

Boris Johnson told MPs yesterday that visits to these medium-risk destinations were acceptable only in ‘extreme circumstances’.

But one analysis said up to 270,000 Britons will fly to amber countries in the five days to Sunday.

In a round of interviews, Mr Shapps urged the public to have ‘a little more patience as the world catches up with our vaccine programme’.

Travellers returning to Britain from an amber location must quarantine at home for 10 days and take a pre-departure test and two post-arrival tests.

‘It’s expensive. We’re not at the stage of saying to people, go to those places on holiday, in fact, please don’t.’

Portugal is currently the only major tourist destination on the ‘green list’.

He told BBC Radio 4’s Today: ‘The amber list and the red list are not for holidaymakers, that’s not the purpose of those lists at this time.

‘We just think that after a year of lockdowns in this country, of people coming forward in record numbers to get their vaccines, we do not want to be in a position of taking risks at this stage about our unlock.’

Asked if he was pushing for the green list to be extended he said: ‘Of course. The reason for that is we have ended up getting way ahead in terms of our vaccination programme in this country and we are just having to wait for other countries to catch up with us.

‘That’s going to gradually happen, obviously, you can see it’s happening, so that list should expand.’

Mr Shapps added: ‘We are reviewing this all the time, every three weeks, the next review is in the first week of June and we’ll have to see what happens.

Mr Shapps added: ‘Our message is very straightforward, which is ‘just a little bit of patience, everyone’.

‘I know it’s been an incredibly tough year and there are extreme circumstance where people will feel that it is the right thing to do – perhaps because they have a sick family member and some extreme situations where they’ll travel in the orange category.

‘But by and large we are just asking people to be a little bit patient as other countries catch up with our world-leading vaccination programme and then people will be able to, I hope, travel.

‘We are returning to a world which looks more normal, I hope.’

Mr Shapps defended the continued availability of direct flights from countries such as India on the coronavirus red list. 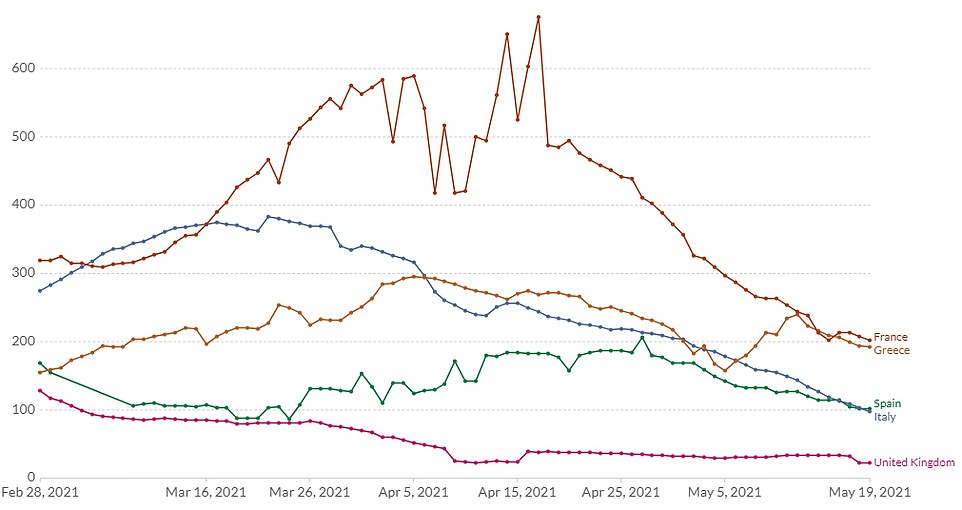 The seven-day infection rates per million people have been coming down in France, Greece, Spain and Italy 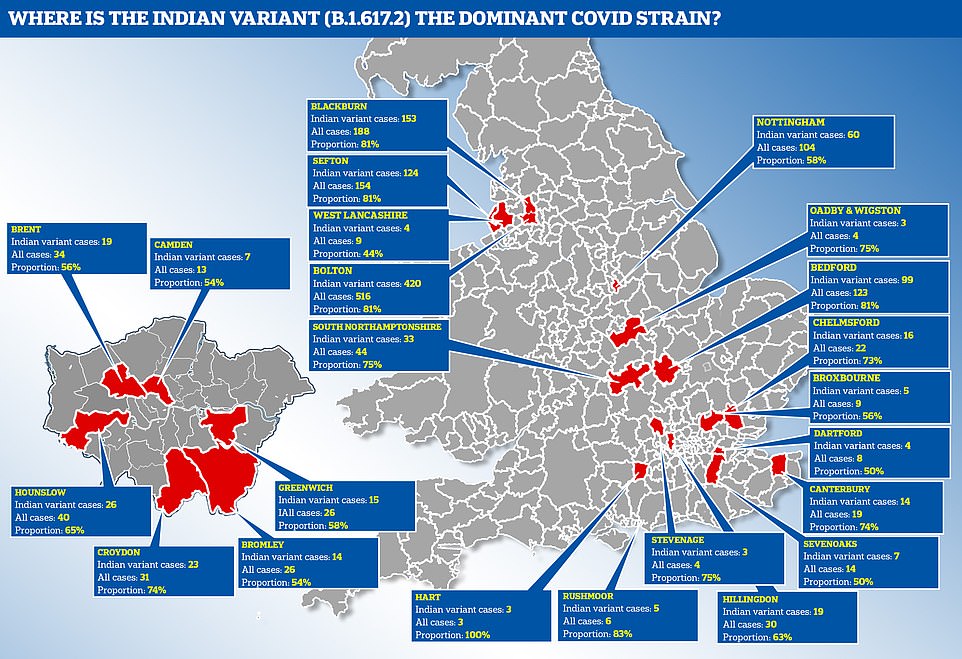 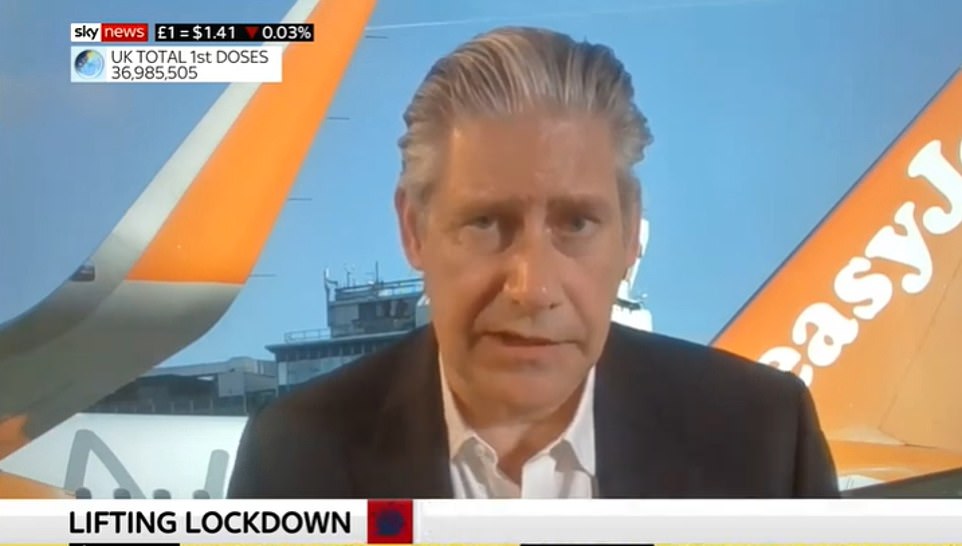 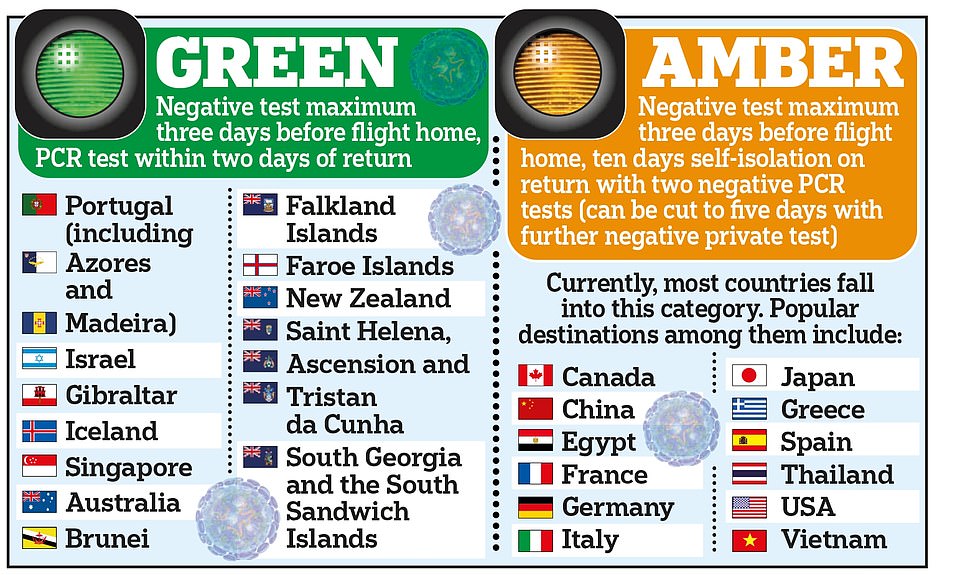 In an interview on Sky News, he said: ‘You cannot prevent British citizens from returning home, no country can ban its own citizens.’

The Cabinet minister told BBC Breakfast that he wanted passengers arriving from amber and red list countries to be segregated in airports ‘as much as is practically possible’.

He added that Heathrow, which is currently only using two of its four terminals, is examining using a ‘spare terminal to bring in perhaps the red flights separately’.

However, there are fears that unvaccinated Britons could miss out on holidays to the EU as Brussels ponders whether to leave the UK off a ‘white list’ of low infection countries over rising cases of the Indian Covid variant.

Under new plans approved by EU ambassadors yesterday, non-essential travel into the bloc will be permitted for all fully vaccinated travellers regardless of their country of origin.

A ‘white list’ of countries will also be drawn up, allowing even unvaccinated travellers in – provided they have a negative test or evidence of a previous Covid infection.

The UK was expected to make the ‘white list’ since it has just 44 cases of Covid per 100,000 people, with the maximum threshold being 75.

But that is now in doubt, with ambassadors due to consider the situation tomorrow.

‘There are countries who are concerned about the potential of the Indian variant to be more present in the UK and therefore to run the risk, if the EU opens towards the UK, to import the Indian variant into the European Union,’ she said.

‘There are countries who are saying that.

‘This is why this discussion is not yet over, but I do hope that in the next hours there will be clarity on this point.’

Ms Gonzalez said Spain felt ‘more confident’ about letting vaccinated citizens into the country rather than applying a blanket approval for all people in the UK, but that any decision would wait until ‘EU regulation has been adopted’.

She said a decision from Brussels was ‘very close to getting done’, adding: ‘If that is the case, then yes as soon as this is done, hopefully towards the end of this week, vaccinated British citizens would be allowed in.’ 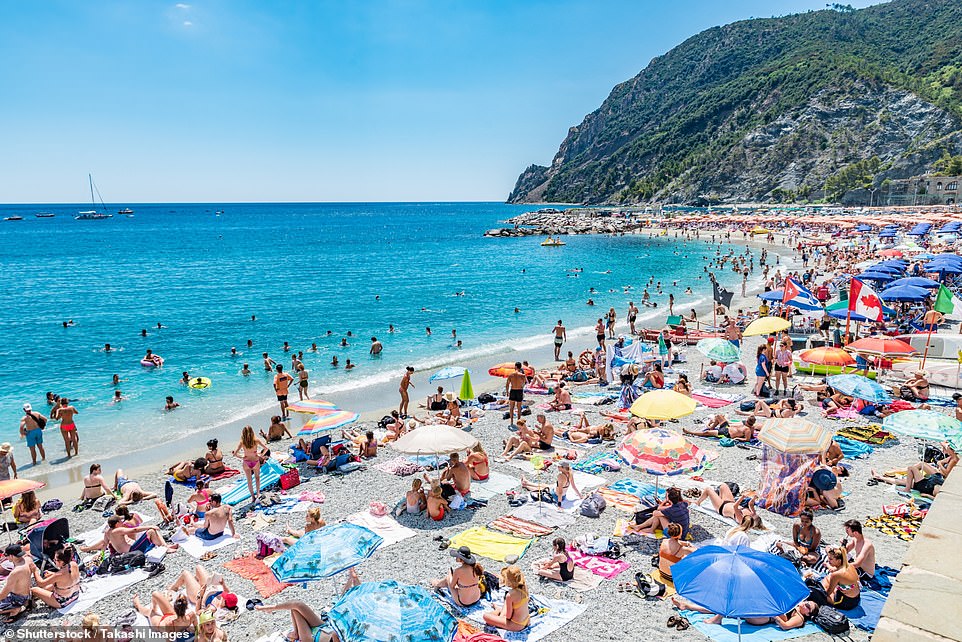 Italy is one of the countries airlines say should be on the green list. Pictured, Monterosso al Mare in 2019