An Italian engineer, whose father was a professional chef in Milan, has taken home The Great British Bake Off title 2021.

Giuseppe Dell’Anno, 45, triumphed over fellow contestants Crystelle Pereira, 26, and Chigs Parmar, 40, in arguably the closest ever final of the Channel 4 show tonight.

The chief engineer, who now lives in Bristol, became the first Italian winner after impressing judges Paul Hollywood and Dame Prue Leith with his consistency and professionalism throughout the competition.

After excelling in last week’s semi-final – winning a Hollywood handshake for his signature bake – Dell’Anno continued in the same fashion. 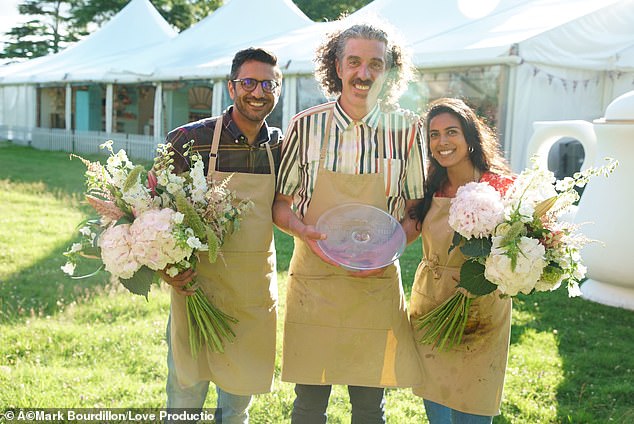 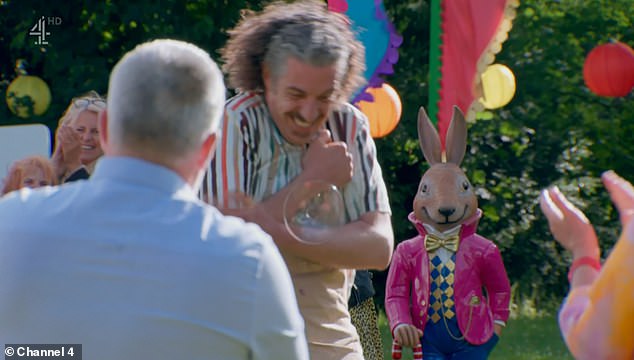 His take on the classic carrot cake with a fig and walnut jam was commended for it’s ‘delicious flavour’, despite it being warm when he put it together.

He then placed last in the technical challenge after ‘massively’ overbaking his Belgian buns.

‘The icing is perfect, the shape is lovely, everything except leaving them in the oven too long,’ said Leith.

‘That’s such a pity because this is the final.’

‘They would have been number one, bar for the colour,’ said Hollywood.

This led to Crystelle winning her first ever technical challenge, exclaiming: ‘It only took me 10 weeks.’

However, Dell’Anno soon impressed once again with his Mad Hatter’s Tea Party showstopper – which used both sweet and savoury treats, while showcasing a minimum of four baking disciplines.

‘I feel it’s been a great year for Italy,’ Dell’Anno, who is fluent in English, French and Italian, said last night.

‘I truly can’t believe it or take it in, this has made me so incredibly happy to be a Britalian. Dell’Anno is my surname which translates in English to ‘of the year’ – and I feel this has certainly been my year.’

Viewers were quick to congratulate the winner on Twitter, with one person writing: ‘Well done Giuseppe! Consistently incredible (which is what people quickly forget). Big love.’

Reaction: Twitter users were quick to congratulate the Italian engineer for winning the contest 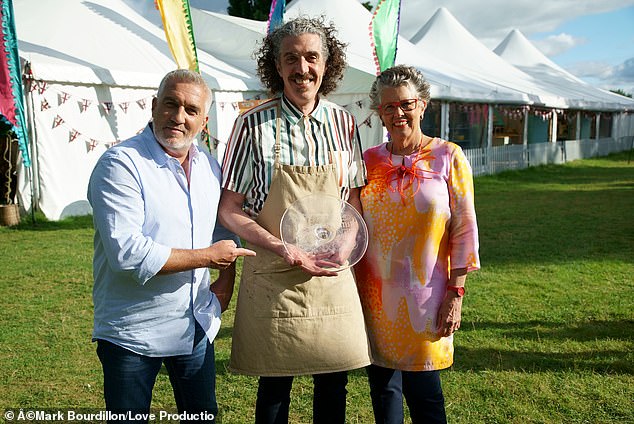 The chief engineer, who now lives in Bristol, became the first Italian winner after impressing judges Paul Hollywood and Dame Prue Leith (pictured together) with his consistency and professionalism throughout the competition

A fourth admitted: ‘Didn’t see that coming but not unhappy with that result. Well done G.’

Dell’Anno, who is married with three young sons, was inspired by his father, who was a professional chef in Milan, where he was raised.

He added: ‘All I can think of is the reaction from my mum and dad. The fact is that everything I have done to deserve this comes from his heritage, it’s the best thank you note I can possibly send him.

‘He is going through a very bad time healthwise, so I think this is going to be a great boost.

Impressed with Dell’Anno’s showstopper, Paul said: ‘I think it’s simple and effect. It’s quite simple… It’s very Italian in its flavour weirdly enough, I like it.’

Prue added: ‘Delicious… Goodness, that [part]is quite complicated… I’m taking it away with me, absolutely delicious.’ 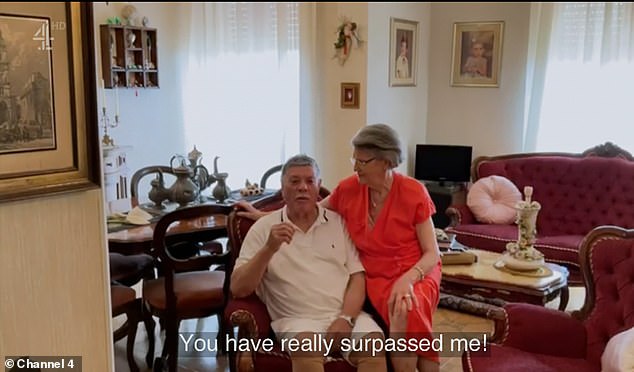 Dell’Anno, who is married with three young sons, was inspired by his father (pictured left), who was a professional chef in Milan, where he was raised 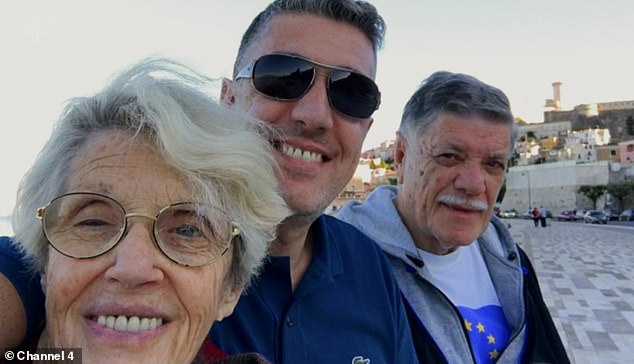 Dell’Anno added: ‘All I can think of is the reaction from my mum and dad (pictured). The fact is that everything I have done to deserve this comes from his heritage, it’s the best thank you note I can possibly send him. 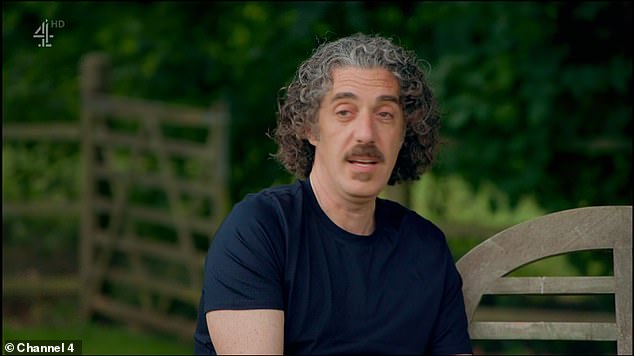 Giuseppe Dell’Anno (pictured), who was inspired by his father a professional chef, said everything he has done is a thank you note to him

The competition was closer than ever before, with all three finalists having each been named star baker twice and received two Hollywood Handshakes in the lead up to the final.

However, Hollywood, 55, claimed he spotted the winner in week one.

He said: ‘The first time I walked into the tent and in the first signature I saw his mini rolls, I thought that looks like our winner, you could see the heart and soul going into his baking. He has done an incredible job!’

Dame Prue added: ‘He is such a classic, beautiful baker and he represents a long tradition of classic Italian baking; he has done it brilliantly all the way through.’

The Italians victory comes after Italy won the Euros in July after beating England, and after triumphing in the Eurovision Song Contest in May. 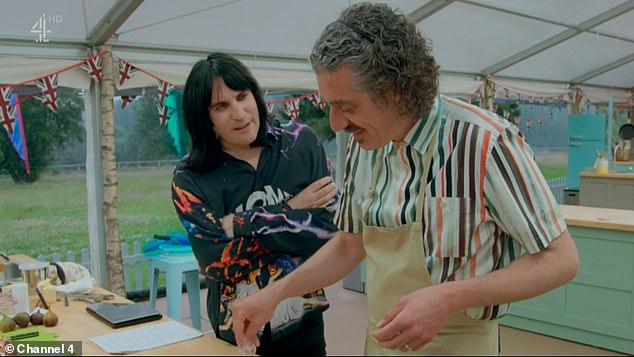 Giuseppe (pictured, with Noel) admitted that he isn’t proud of himself often, but is stunned by his achievement 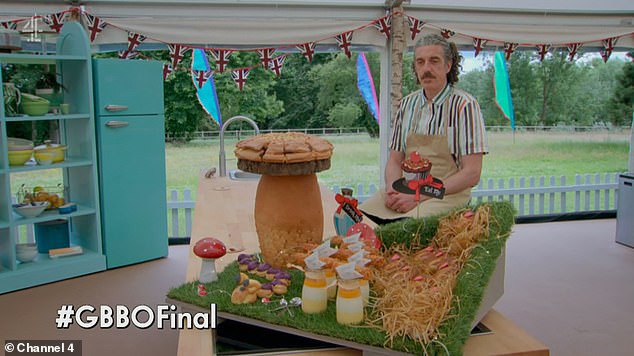 Dell’Anno wowed the judges with his showstopper, which featured various parts to make it a baking masterpiece (pictured)

Bake Off extended its licence with Channel 4 and Love Productions for a further three years until 2024.

Last week saw three-time star baker Jurgen eliminated, leaving fans devastated by his departure, which came as a shock considering he was the frontrunner.

Speaking about his time on the show and his exit in the semi-final, Jurgen said: ‘I feel kind of OK… I kind of saw it coming. I think the others are more shocked than I am.

‘It has been incredible and I have really enjoyed being here. I have made friends for life, and I will be with them in spirit.’

The German physicist was considered a favourite to win the show outright but failed to impress during the patisserie-themed semi-final.

Chigs Parmar, Giuseppe Dell’Anno and Crystelle Pereira when competing to be crowned the winner of the 12th series of the amateur baking competition on Channel 4

Biden Seeks to Lower Gas Prices by Freeing Up Oil Reserves, But Warns It Will Take Time | Video

Biden Seeks to Lower Gas Prices by Freeing Up Oil Reserves, But Warns It Will Take Time | Video