Rescue crews worked throughout the night to save thousands of stranded motorists in Greece and Europe’s busiest airport in Istanbul was forced to close as a snowstorm caused travel chaos for Mediterranean countries.

A rare snap blizzard blanketed huge parts of Greece and Turkey on Monday night as more than 31 inches of snow fell in some areas, paralysing traffic and hamstringing services for a second consecutive day.

The Greek authorities declared Tuesday a public holiday, shutting public offices and private businesses except supermarkets, pharmacies and petrol stations in the greater Athens area and on some islands.

Parts of the city’s ancient Acropolis were submerged in a thick layer of snow, while heavy machinery worked through the night to plough a path for aircraft to safely operate at Istanbul Airport on Tuesday.

Thousands were left to endure below-freezing conditions in their vehicles overnight in both Greece and Turkey as highways and roads were left largely inaccessible after being battered by the snowstorm.

Soldiers were drafted in to deliver food, water and blankets to motorists who were left stranded in their cars on Attiki Odos, the Greek capital’s main ring-road, for up to 24 hours according to local media.

Drivers were ordered to stay off the streets after cars ploughed into one another on Monday and operations were finally resumed at Istanbul Airport after 24 hours of closure as the 16 million residents of Turkey’s largest city entered a second day marred by travel chaos on Tuesday. 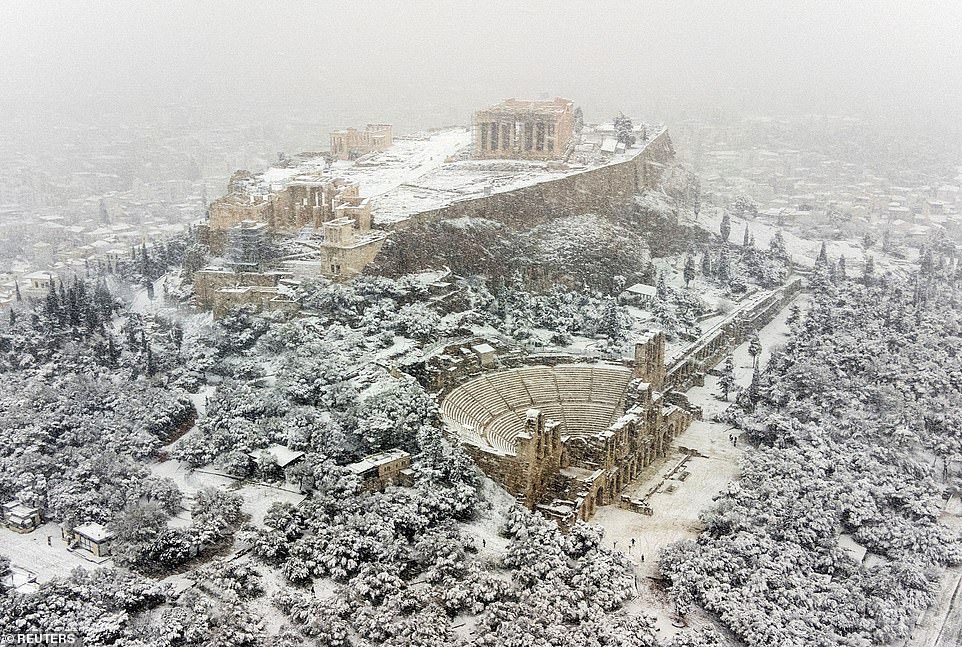 GREECE: The ancient Acropolis in Athens (including the Parthenon, pictured) was covered in a thick layer of snow after a snap blizzard struck the country on Monday 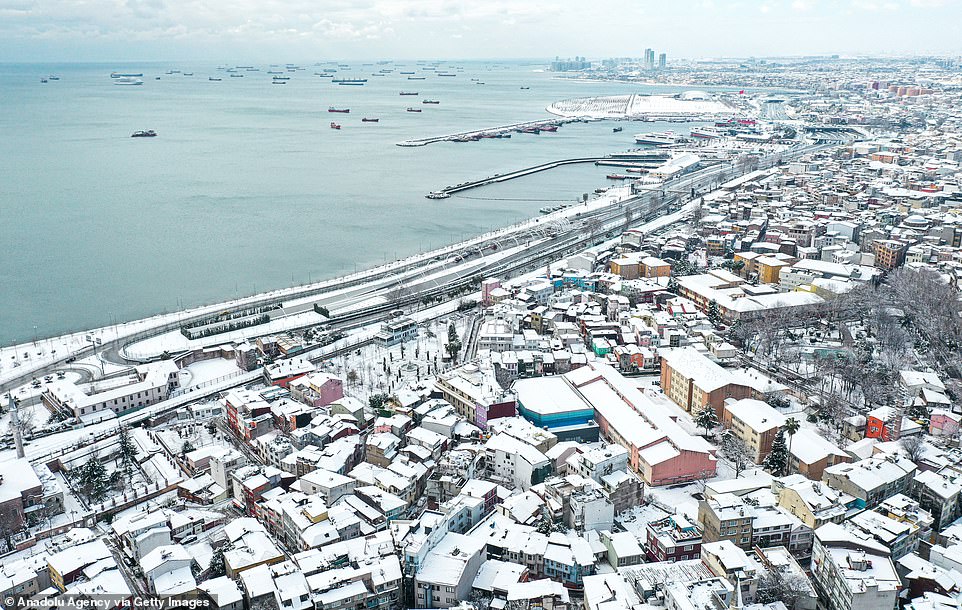 TURKEY: An aerial view of the Yenikapi sea-front area of Istanbul on Tuesday after approximately 2.8ft of snow fell in the historic city 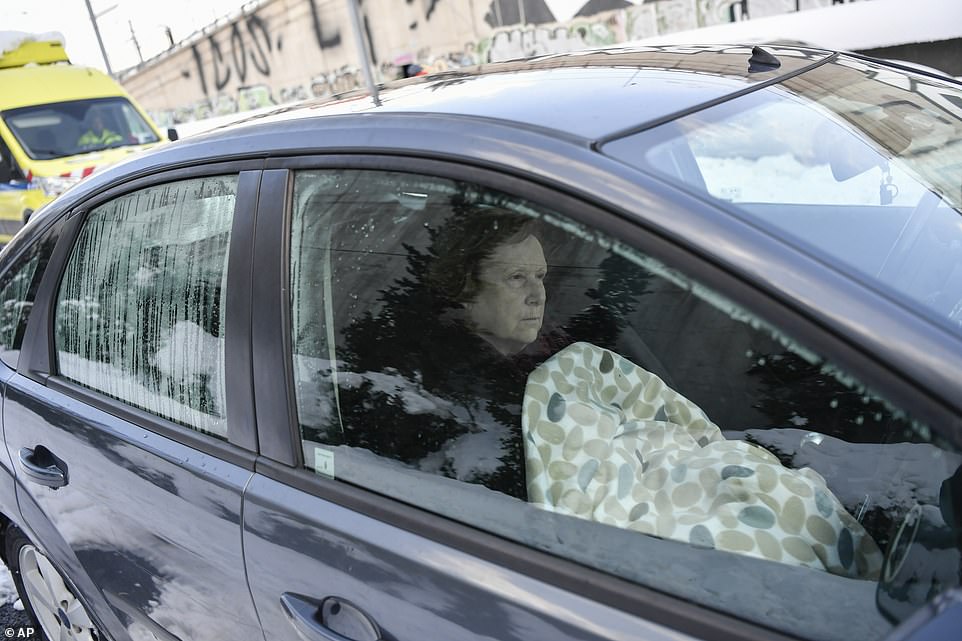 GREECE: An elderly woman pictured wrapped in a blanket was trapped in her frozen vehicle for more than 24 hours on a motorway near to Athens after all major roads in the city were forced to a standstill after adverse weather conditions 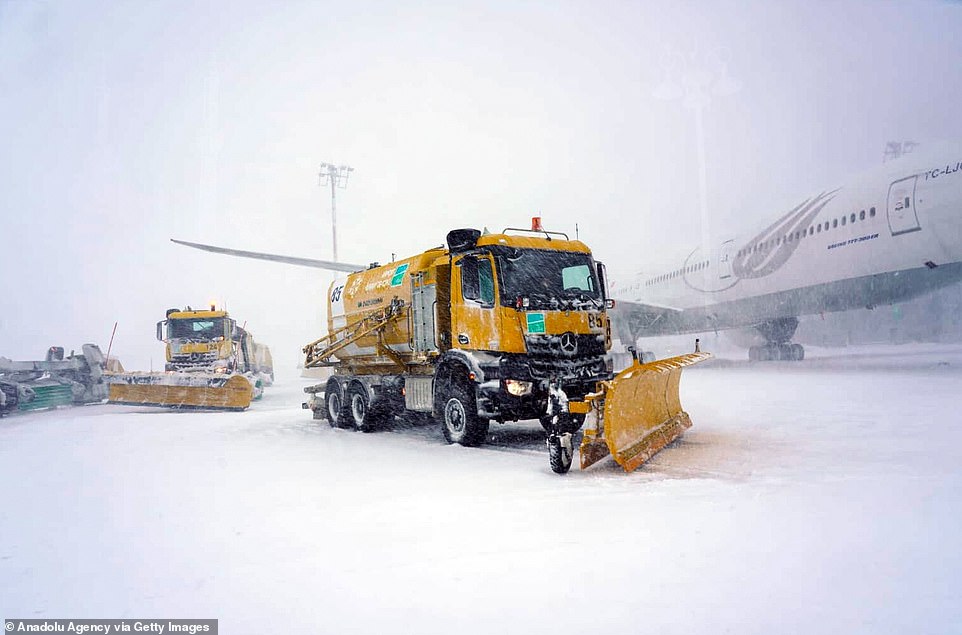 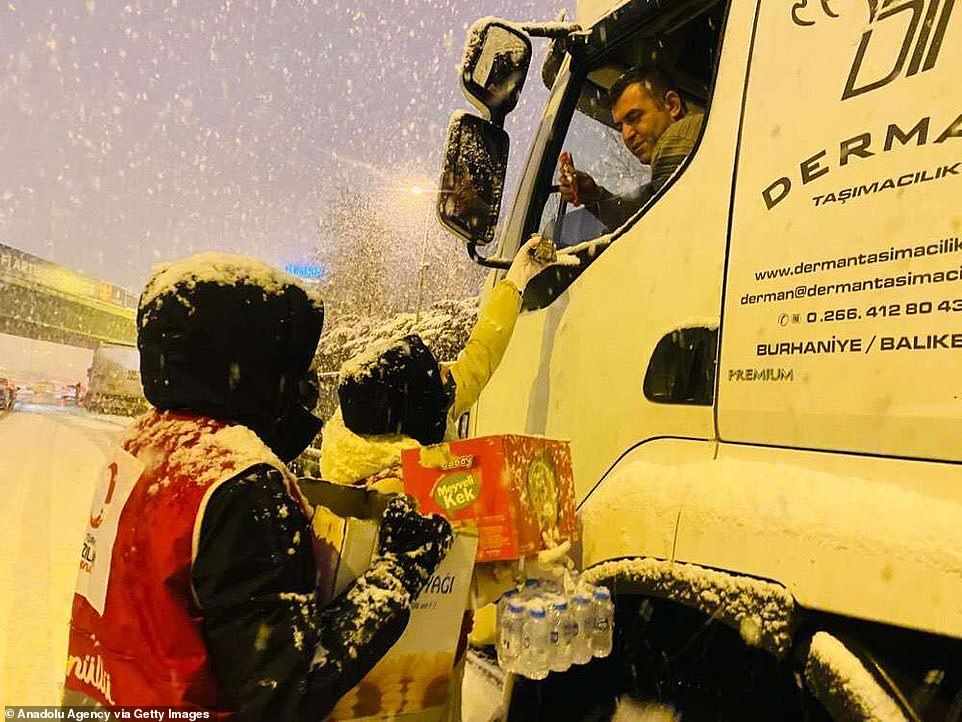 TURKEY: Red Crescent members offer food and water to stranded motorists in Istanbul on Tuesday after heavy snowfall saw a second day of travel chaos across the country 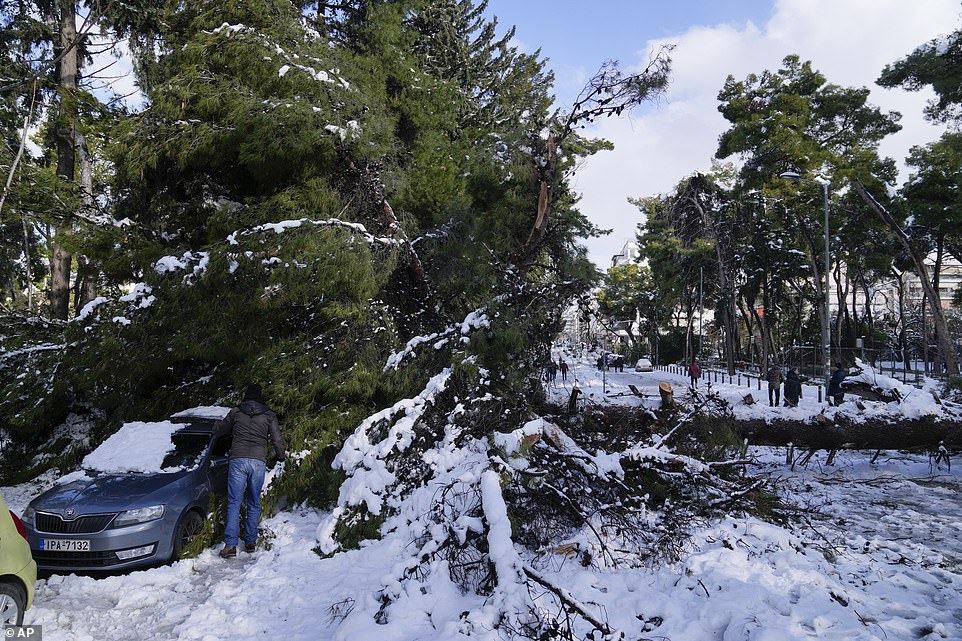 GREECE: A fallen tree blocks a road in Athens after a rare blizzard caused more than 31ins of snow to fall in some areas of the eastern Mediterannean 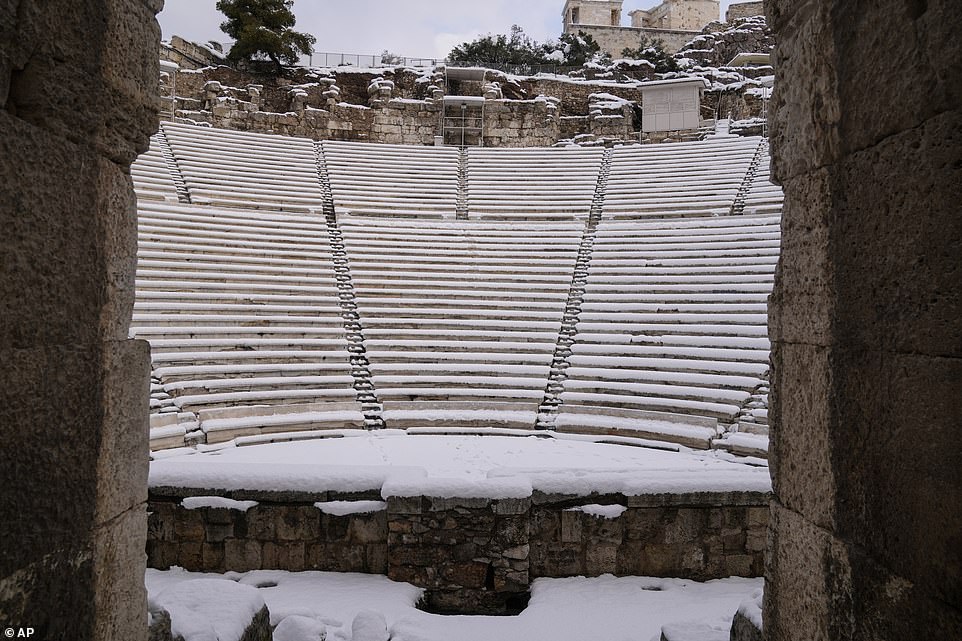 GREECE: The ancient Herodes Atticus theatre is pictured with a thick blanket of snow on Tuesday morning after a winter storm in Athens 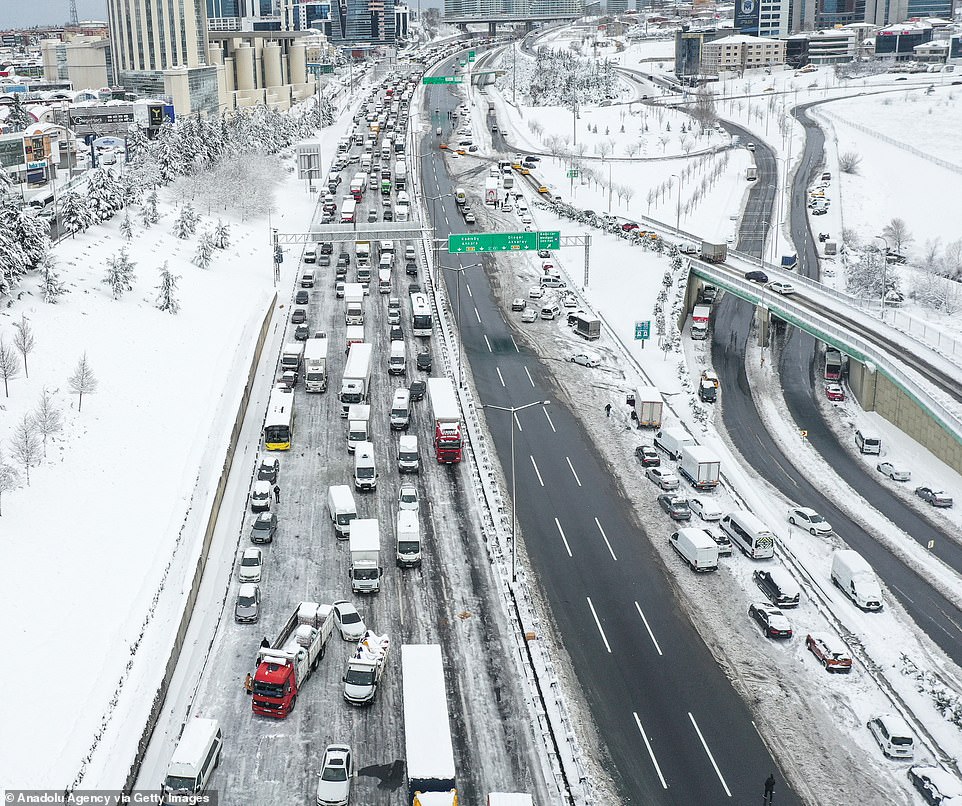 TURKEY: Thousands were left to endure sub-zero conditions in their vehicles overnight (pictured) and drivers were ordered to stay off the roads in Istanbul 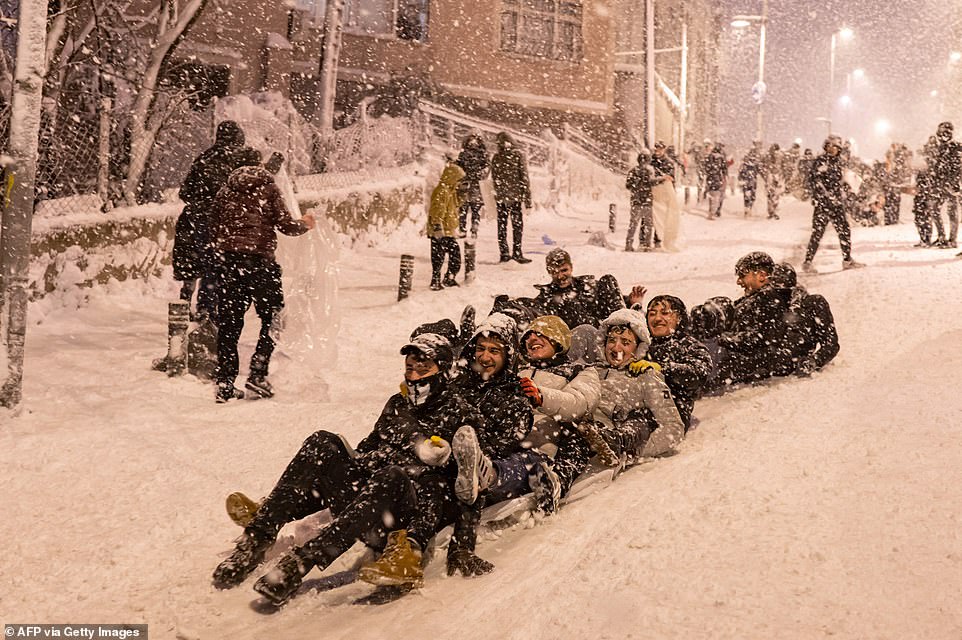 TURKEY: Pedestrians were able to see the bright side of the surprise blizzard as they played in the snow in Istanbul on Monday evening 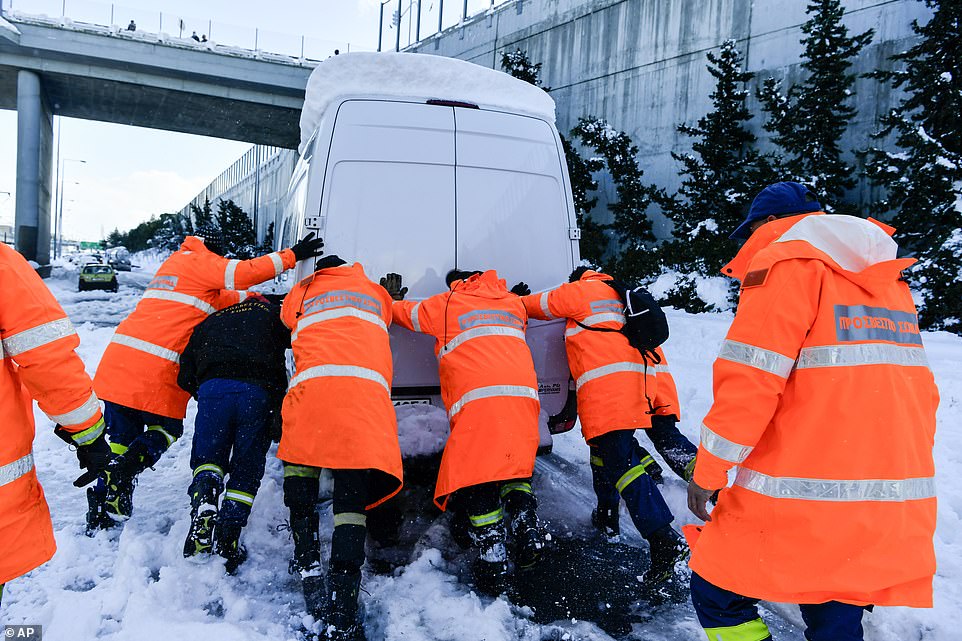 GREECE: Rescue teams and firemen work to free a van from its icy shackles in Athens, Greece, on Tuesday morning after a snowstorm 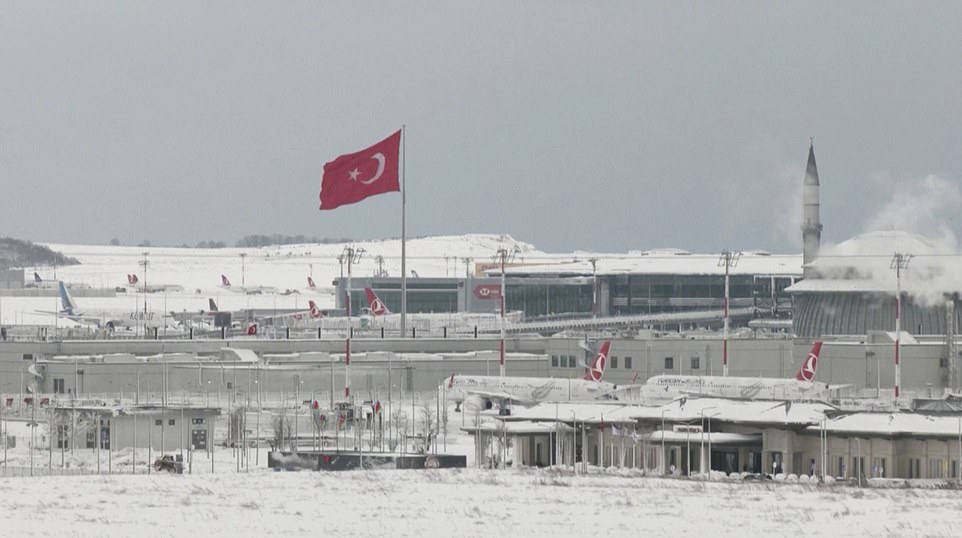 TURKEY: In an unprecedented move, Europe’s busiest airport in Istanbul (pictured) grounded all flights on Monday for the first time since it replaced the city’s old Ataturk Airport as the new hub for Turkish Airlines in 2019 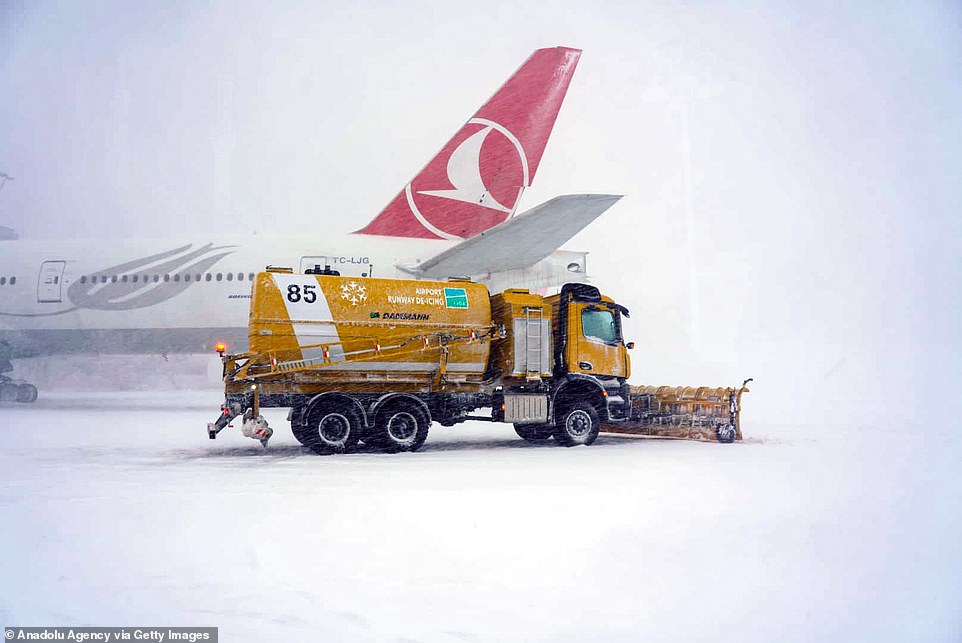 TURKEY: Work to clean the runway and taxiways continues at Istanbul Airport where all flights were stopped overnight on Monday due to heavy snowfall

An Icelandic low-pressure system is said to be the cause of the snap cold front affecting much of the eastern Mediterranean this week, according to Istanbul’s Disaster Coordination Center.

The storm, named Elpida, is expected to last until at least Wednesday, potentially spelling further chaos after workers miraculously escaped injury when the roof of one of Istanbul’s cargo terminals collapsed under the weight of snow on Monday.

In an unprecedented move, Europe’s busiest airport grounded all flights on Monday for the first time since it replaced Istanbul’s old Ataturk Airport as the new hub for Turkish Airlines in 2019 after up to 2.8ft of snow fell.

Its press service pushed back its planned reopening hours a handful times before admitting defeat and shutting it down for the night.

It tweeted an image on Tuesday of the first flight since Monday afternoon landing from the Venezuelan capital Caracas after one of the runways was cleared to accept a few airborne flights.

But hundreds of passengers stuck aboard stranded flights took to Twitter to air their grievances with the airport’s customer service and lack of updates.

‘Not even a bottle of water offered. Zero concern for women with children,’ user Chris Wiggett wrote. ‘Not even blankets for stranded passengers at night.’

Images tweeted from inside the packed airport on Tuesday showed a frustrated crowd chanting ‘we need a hotel’.

Temporary shuttle buses struggled against the conditions on Monday as airport workers were filmed desperately tried to push the vehicles out of their snowy shackles.

Horrifying video showed another near-miss in Bingol, Turkey after a woman narrowly avoided being buried underneath a mountain of snow as she boarded public transport.

The governor’s office also urged residents who abandoned their cars on highways because traffic had ground to a halt to return and take their vehicles home. ‘Please, let’s quickly remove our vehicles,’ governor Ali Yerlikaya pleaded on Twitter.

More than 3,500 people had been evacuated from Athens by early Tuesday, some abandoning their cars on foot, but around 1,200 cars remained stuck on the Attiki Odos, the capital’s main ring-road, government spokesperson Giannis Oikonomou said.

‘We had a very difficult night and a superhuman evacuation effort is underway on Attiki Odos,’ Oikonomou told Greek television.

‘We are still in a very difficult phase, as the forecasts indicate that we will face (weather) difficulties again in a while,’ he said. 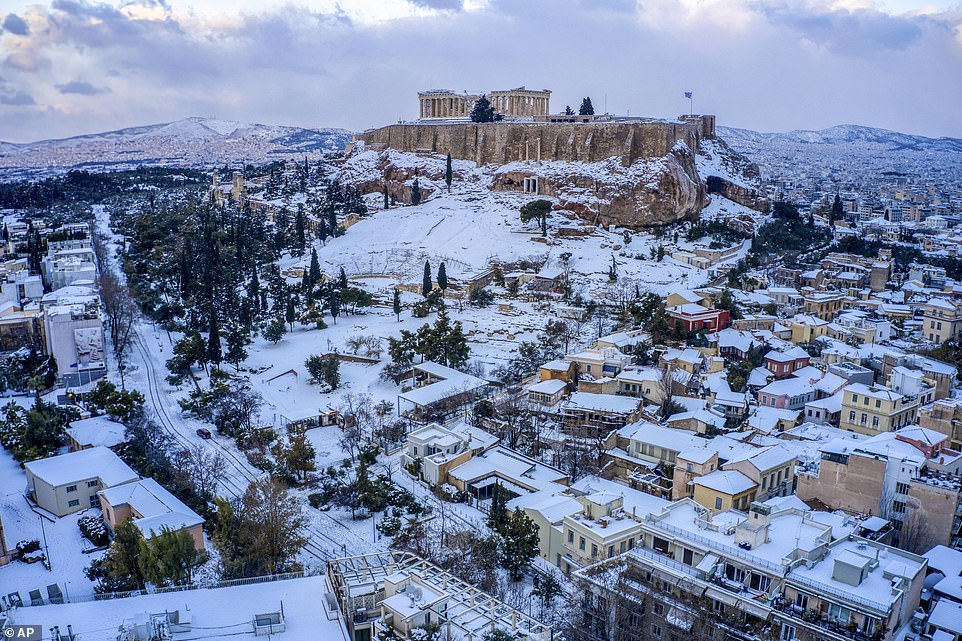 GREECE: Authorities declared Tuesday a public holiday, shutting public offices and private businesses except supermarkets, pharmacies and petrol stations in the greater Athens area and on some islands. Pictured: The city of Athens covered in snow 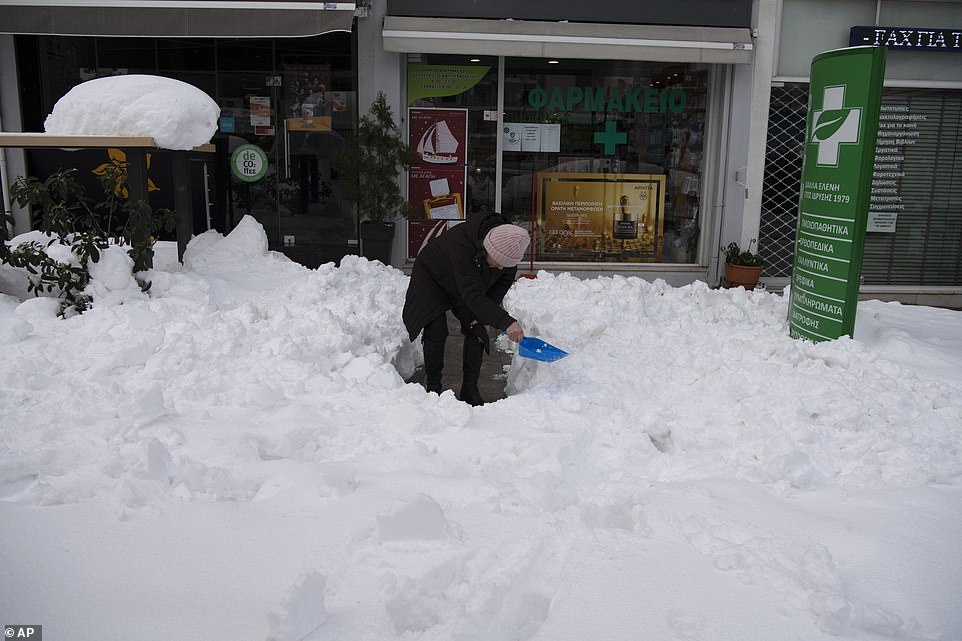 GREECE: A shopowner shovels a path through to a drug store in the Cholargos suburb of Athens after a severe blizzard caused up to 31ins of snow to fall in parts of the country 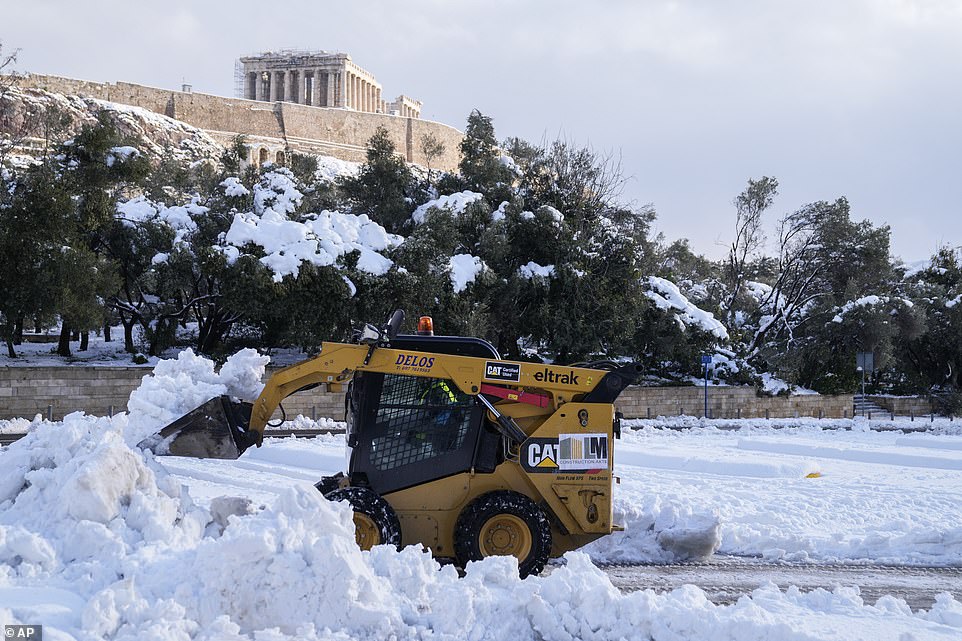 GREECE: Parts of the capital were also struck down by power cuts after the severe weather, with the national grid operator saying crews were working to restore electricity. Pictured: A snow plough clears a path in front of the Acropolis hill 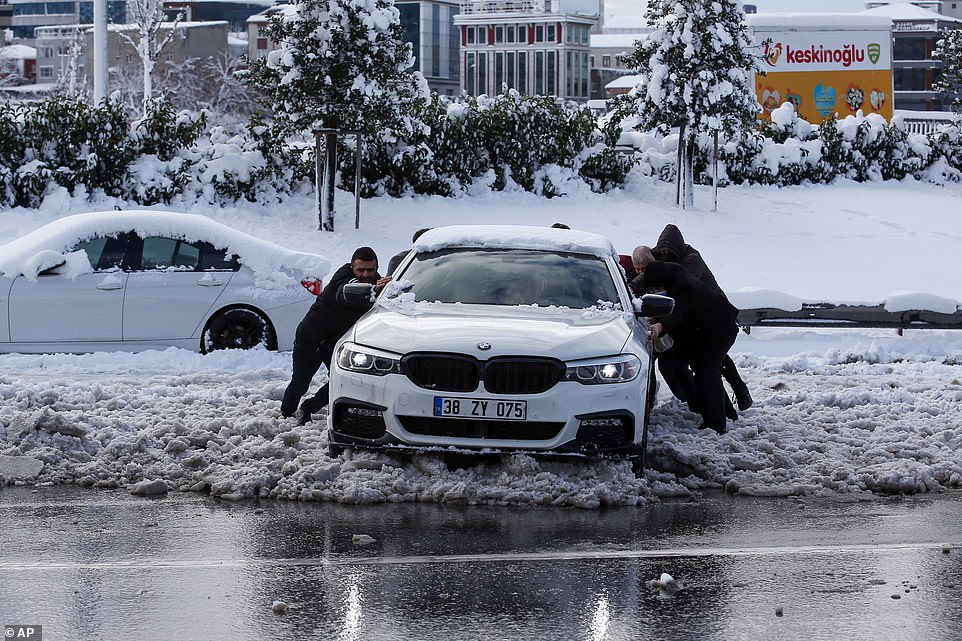 TURKEY: A group of people try and push a BMW off a patch of ice and back onto the main carriageway in Istanbul, Turkey 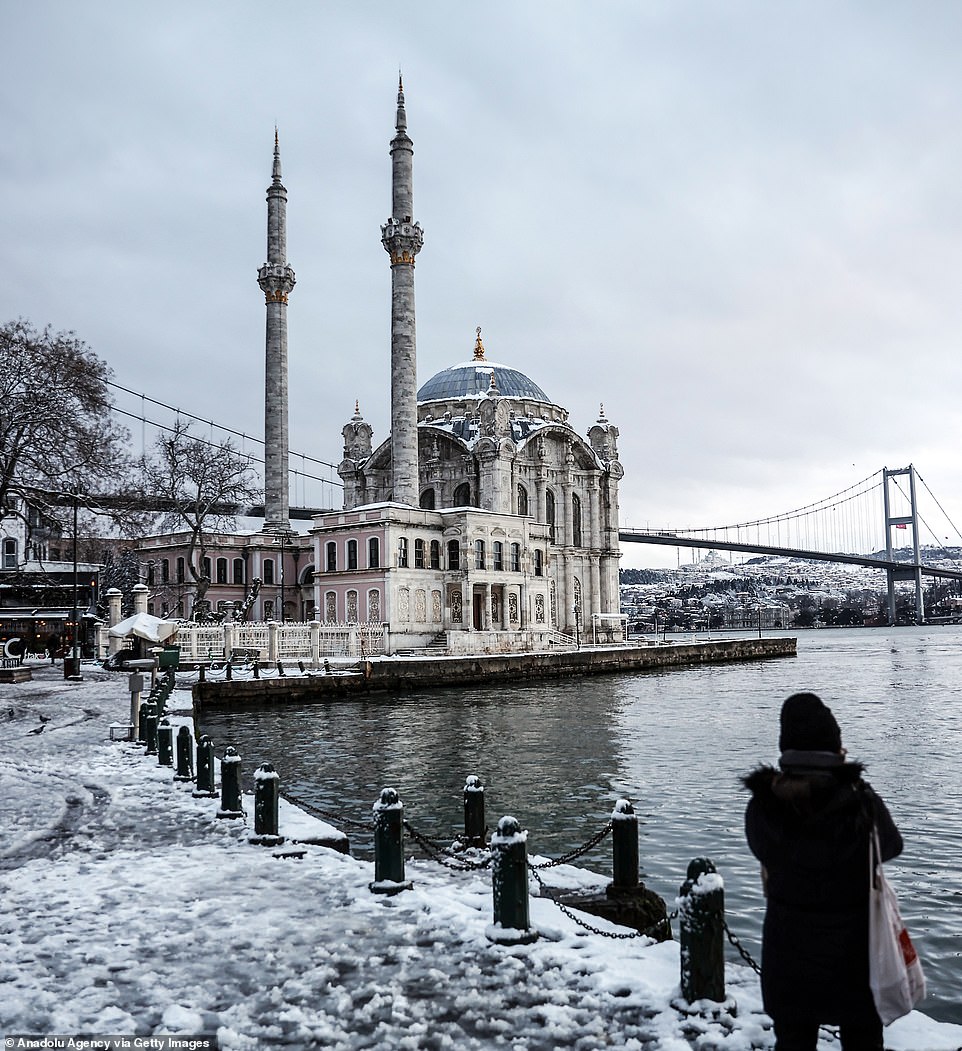 TURKEY: Istanbul’s Ortakoy neighbourhood  is pictured with a light dusting of snow on Tuesday, January 25 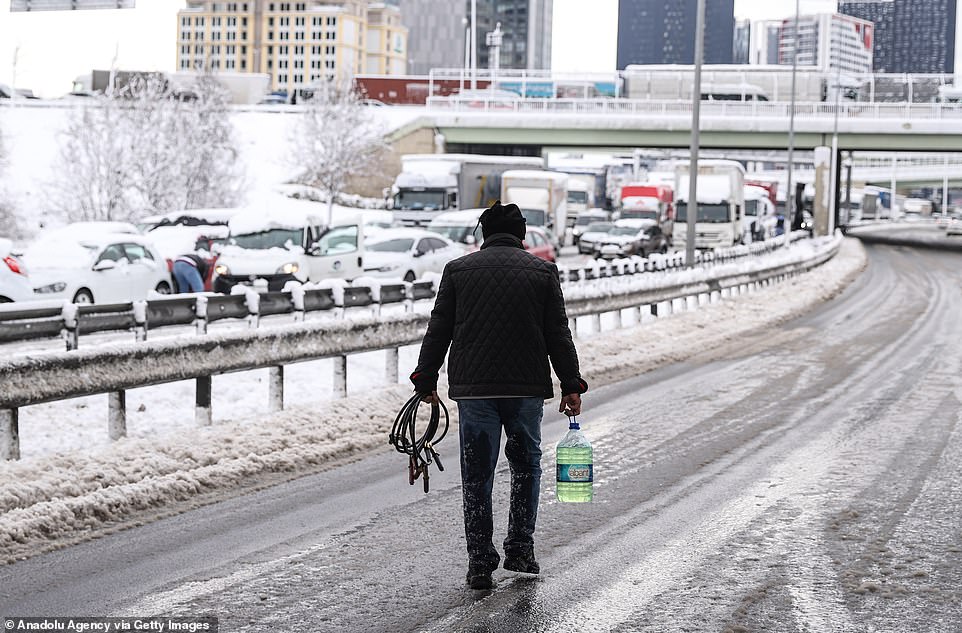 Thousands were left to endure below-freezing conditions in their vehicles overnight in both Greece and Turkey as highways and roads were left largely inaccessible after being battered by the snowstorm. Pictured: A man carries essential supplies on the highway in Istanbul, Turkey 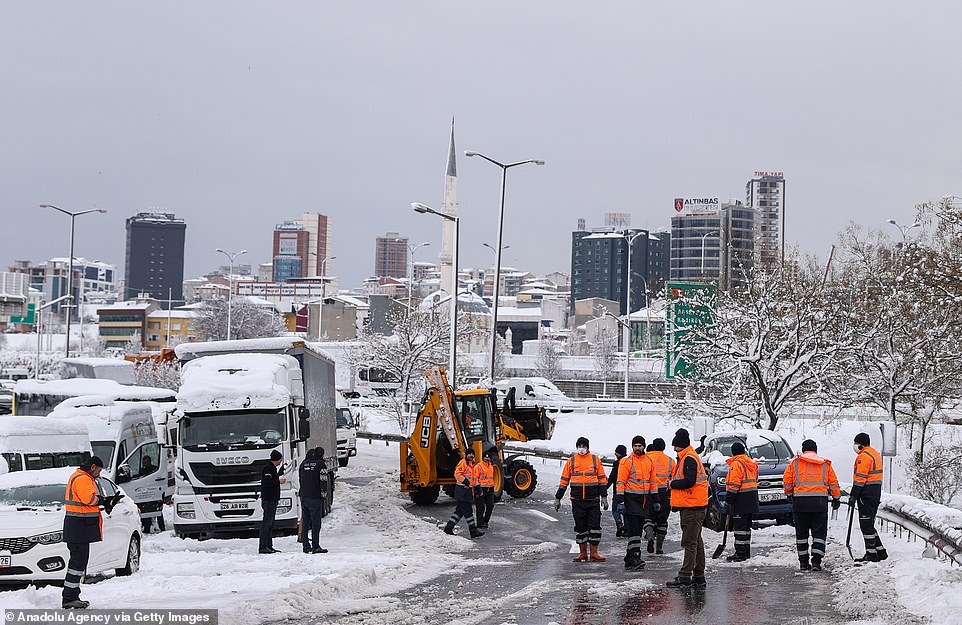 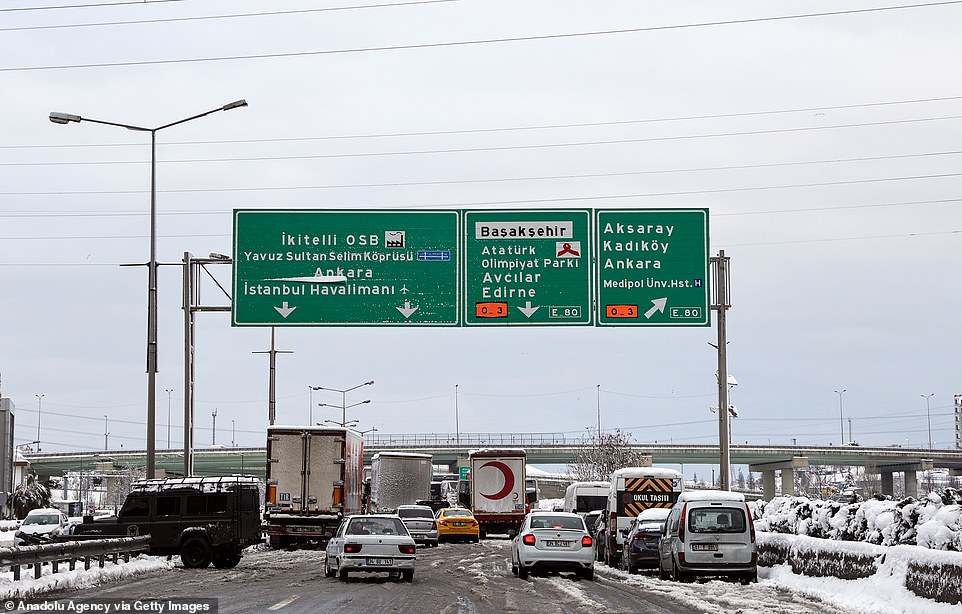 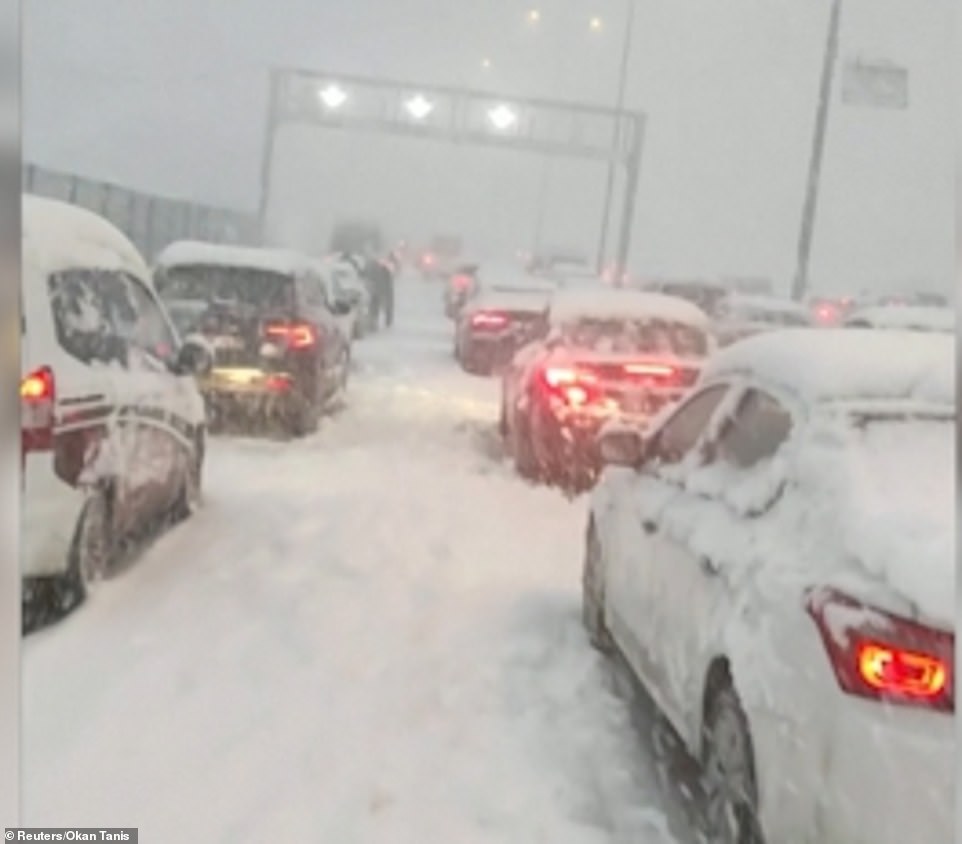 Heavy snow created hellish conditions for drivers in Istanbul, many of whom were forced to abandon their vehicles or face up to 12 hours in freezing conditions on Monday 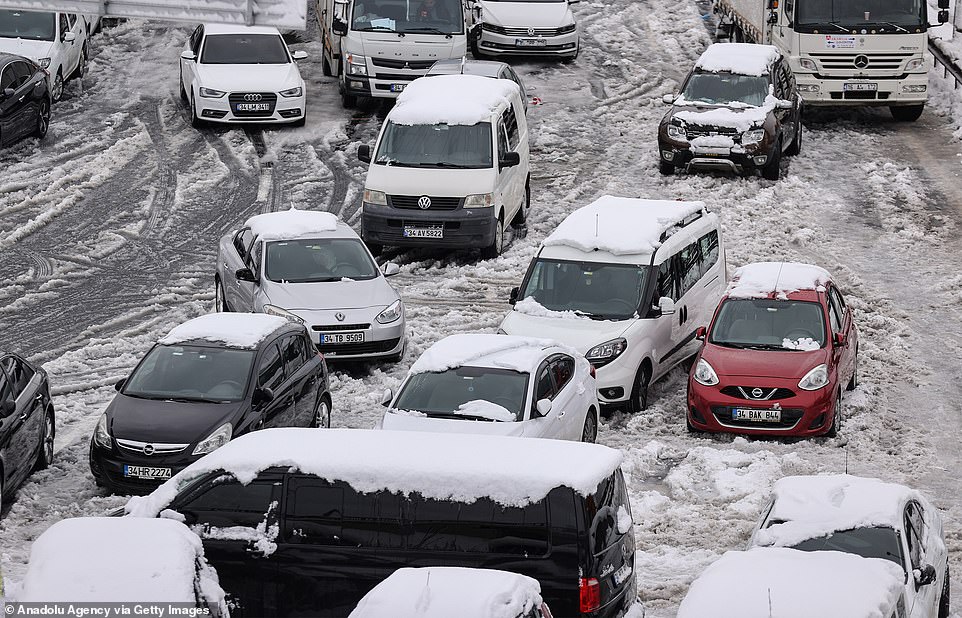 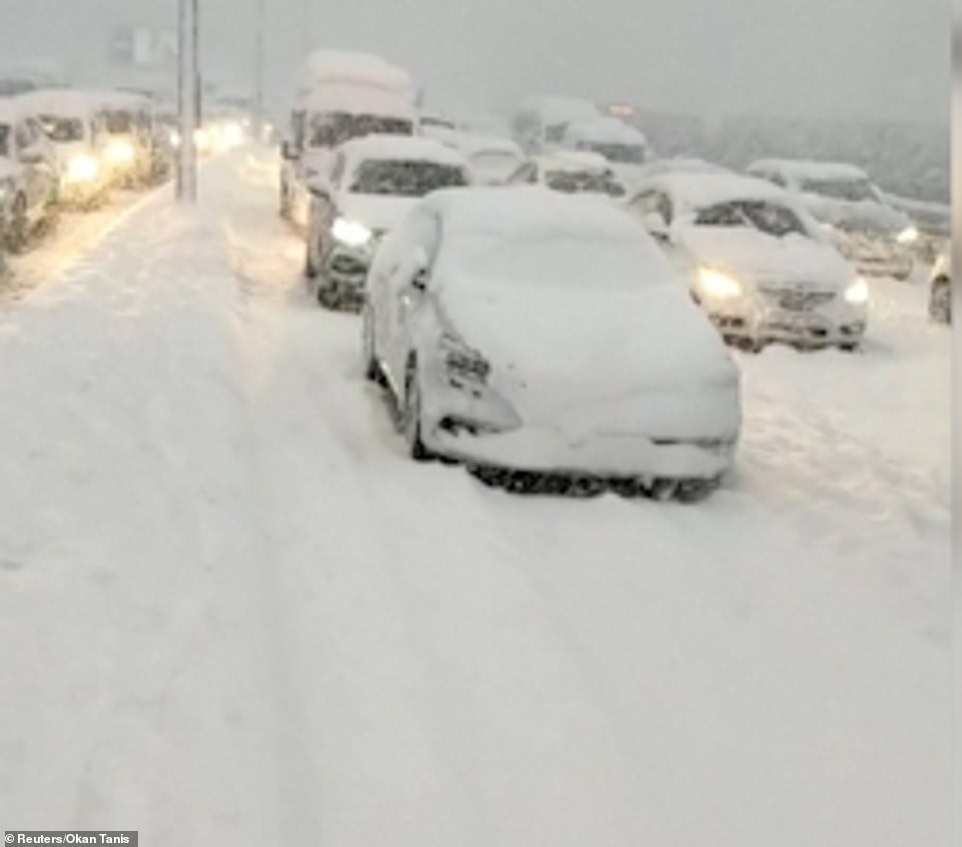 Turkish authorities pleaded with drivers to move their vehicles as Istanbul’s Mayor Ekrem Imamoglu warned that heavy snowfall was likely to persist throughout Tuesday evening. Pictured: Stranded cars in Istanbul on Monday night 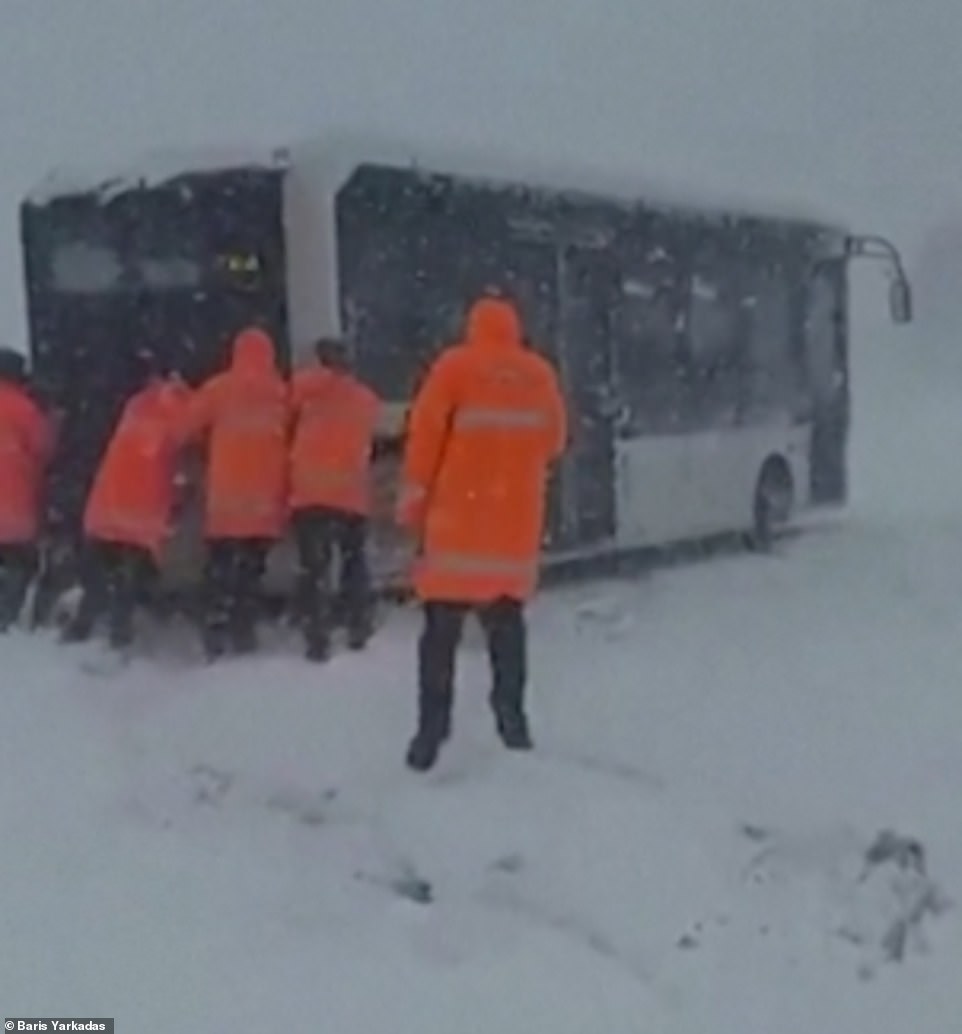 The snap blizzard prompted apocalyptic scenes at Istanbul airport, where airport staff were forced to desperately try and push a bus which became stuck in the snow

Parts of the Greek capital were also struck down by power cuts after the severe weather, with the national grid operator saying crews were working to restore electricity.

Fifteen passengers were injured when a rail transport vehicle tried to pull a train carrying about 200 passengers which had halted in heavy snow in central Greece.

As temperatures plummeted overnight, soldiers were pictured distributing food, water and blankets to stranded drivers, some of whom were left in their cars for more than 10 hours. TV footage showed the road and vehicles covered in snow.

Flurries are forecast to continue through Wednesday as Istanbul’s Mayor Ekrem Imamoglu warned that heavy snowfall was likely to persist throughout Tuesday evening.

Emergency rescue teams and other units worked overnight to clear snowy roads and highways but abandoned vehicles hampered their operations.

A flight suspension in and out of Istanbul Airport on Monday was extended until 1pm Tuesday (10am GMT) over safety concerns, while the governor’s office banned the use of private cars until the same time. Istanbul’s second airport, Sabiha Gokcen, was operating limited services.

‘Nothing is moving. The snow ploughs can’t even reach us,’ Ahmet Odabasi, 40, one of thousands of travelers stranded overnight on a highway west of Istanbul told The Associated Press by telephone.

‘I have been stuck here for 12 hours now. I am lucky that I have gas, food and water,’ said the motorist, who was driving to Istanbul from the city of Edirne, near the border with Greece. 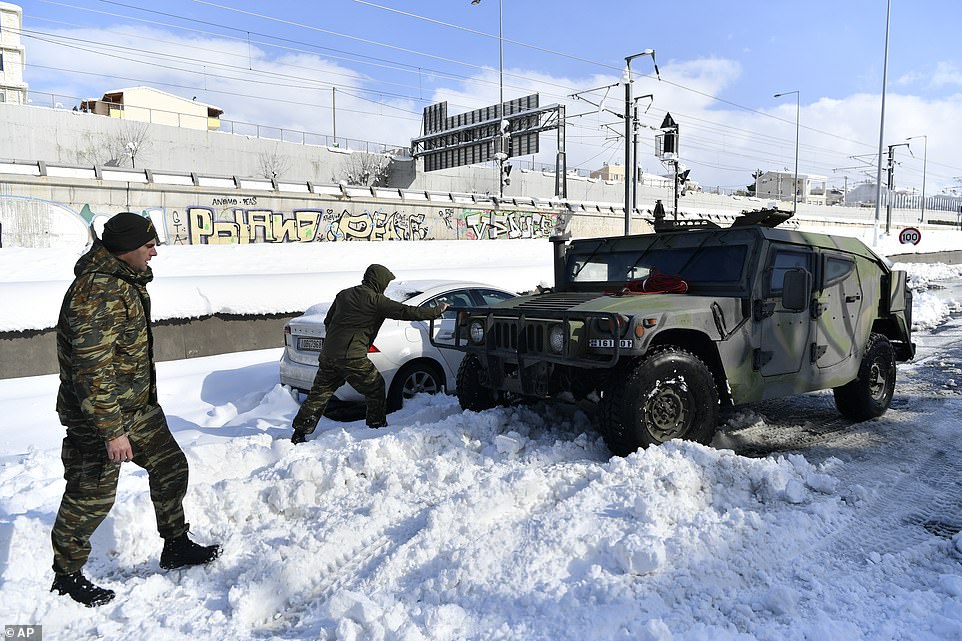 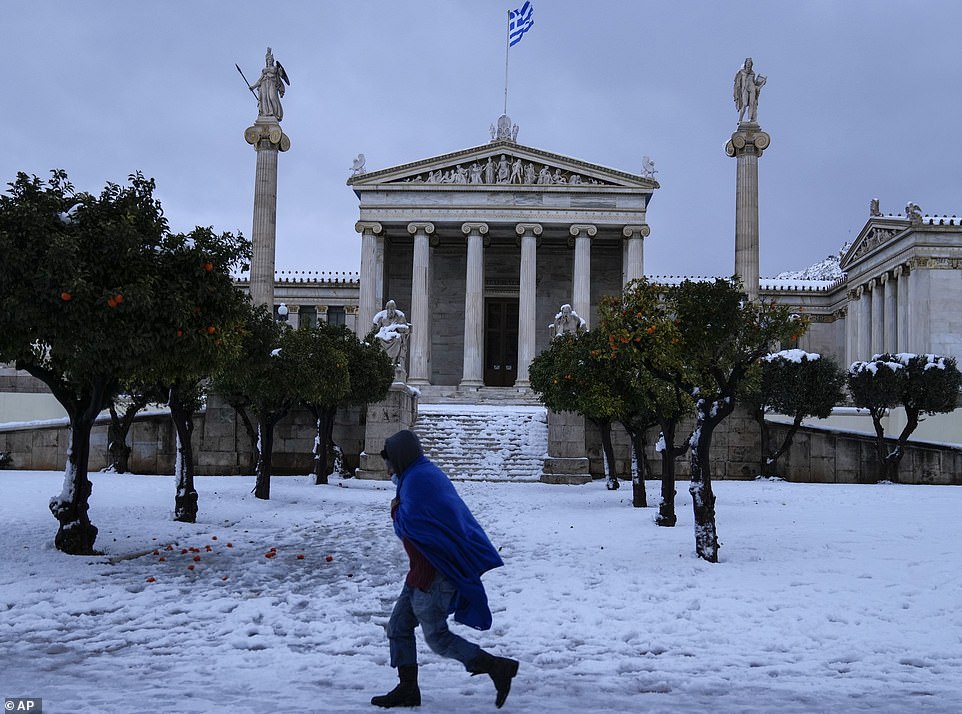 Sun-soaked groves of orange trees were met with a surprise blanket of snow outside the Academy of Athens, Greece on Tuesday 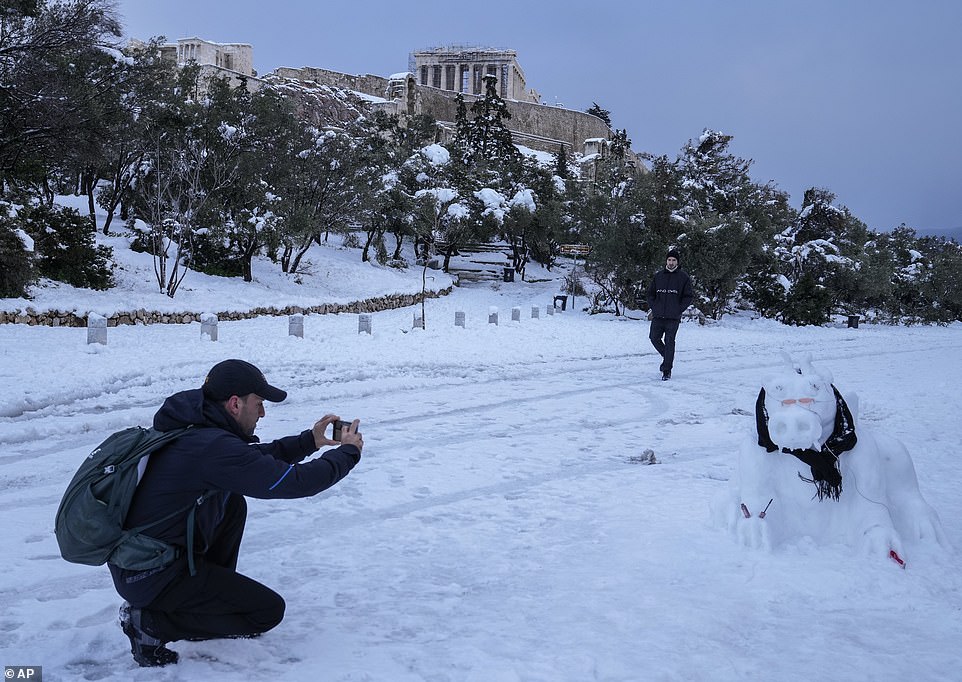 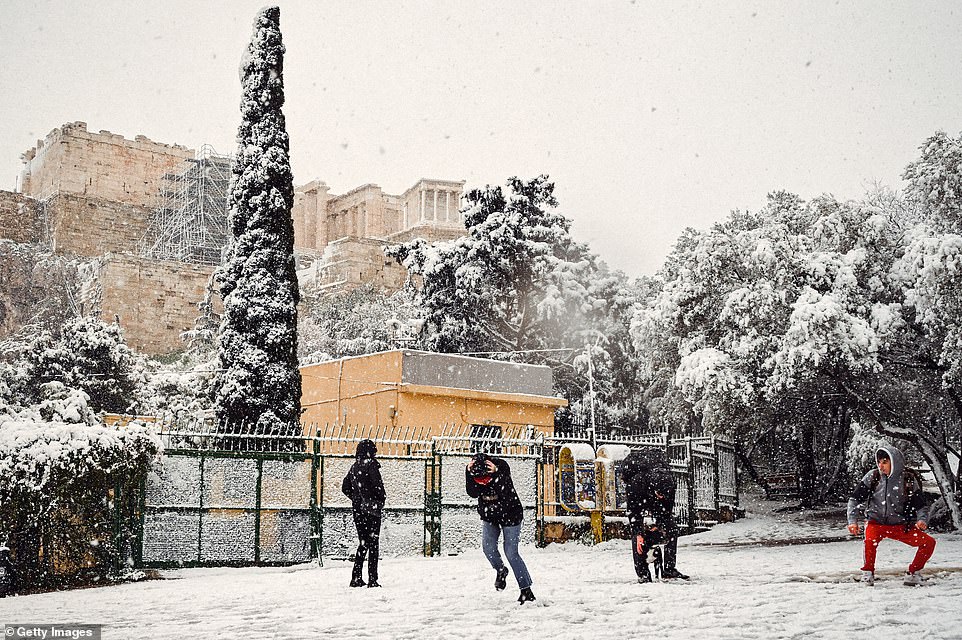 A group of people throw snowballs with the Parthenon temple in Athens seen in the background, during heavy snowfall caused by Storm Elpida on Monday 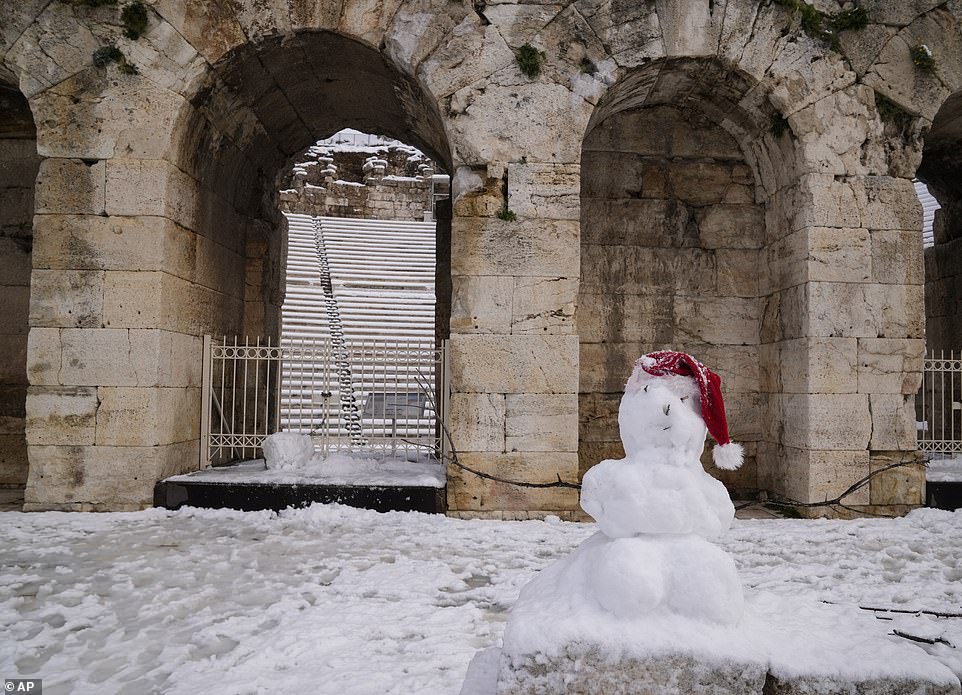 A snowman stands outside the snowy ancient Herodes Atticus theater, in Athens, Greece on Tuesday, after Storm Elpida ripped through the country for a second day 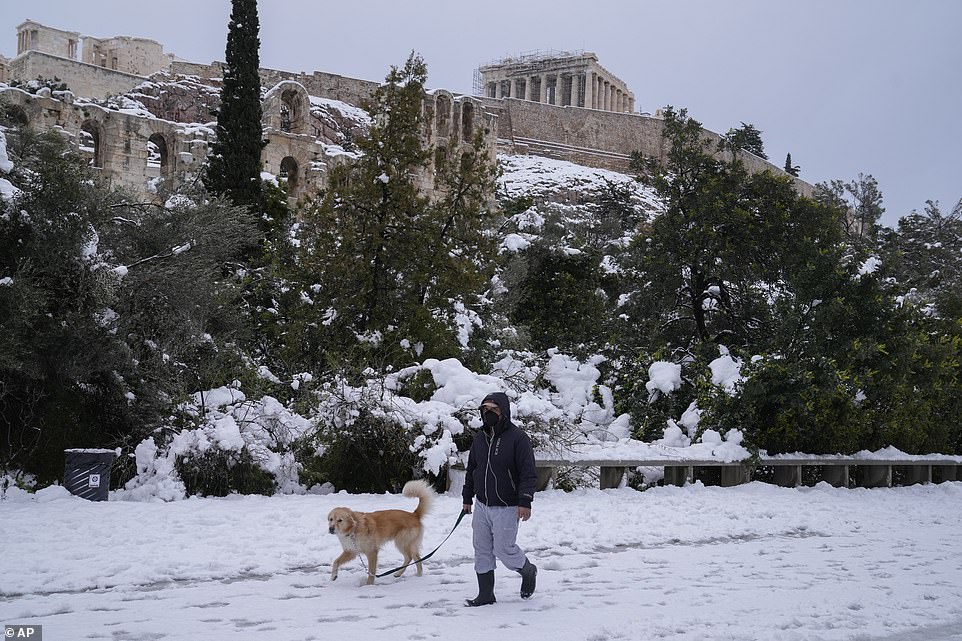 AKOM manager Selcuk Tutuncu told the AP that 40,000 tons of salt have been used since the beginning of the storm.

‘Right now there are over 1,500 vehicles and over 7,000 personnel working out in the field nonstop,’ Tutuncu said.

On Monday, authorities in Istanbul suspended intercity bus services and blocked travel to the city from Turkey’s northwestern Thrace region.

The Istanbul governor’s office announced that civil servants would be allowed to stay at home Tuesday, except for those employed in security, health and transportation sectors. Schools across Turkey were already closed for a winter break.

Imamoglu said the municipality has provided shelter to around 1,500 homeless people. Another 1,500 people stranded at a bus terminal due to the suspension of intercity services were taken to hotels or hostels.

Teams have left some two tons of food for stray cats and dogs, Imamoglu said.

Thibodeau is unclear on Reddish’s inclusion in his rotation