A Greek Orthodox priest has been shot and severely wounded by an attacker in the French city of Lyon.

The Christian clergyman was locking up his church when the gunman struck at around 4pm on Saturday.

The cleric is a 52-year-old Archpriest – a term used in Eastern Christian religions to describe a non-monastic priest.

He was easily identifiable as a member of the clergy because of his epigonation – a distinctive religious garment typically worn with a pectoral cross.

‘The gunman shot the priest twice in the stomach and then ran away,’ said an investigating source.

‘The victim was rushed to hospital with life threatening stomach wounds and is in intensive care.’

Witnesses to the attack on the Archpriest, who had been in France since 2012, said they had heard the sound of two gunshots and then the sound of a woman screaming.

It is thought that a female was close to the scene of the shooting, and her shouting caused the attacker to flee. 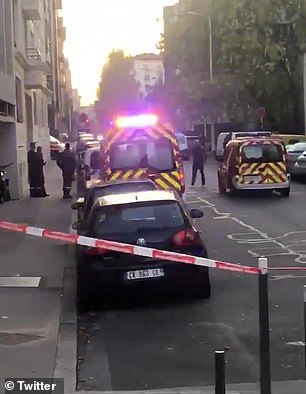 A Greek Orthodox priest has been shot and severely wounded by an attacker in the French city of Lyon. (Pictured: Law enforcement attending the scene of the shooting today)

The gunman was described as ‘male and in his forties’. He is thought to have fired his weapon twice.

As anti-terrorist troops secured the scene in the 7th arrondissement of Lyon, it emerged that the attacker was armed with a sawn-off hunting rifle.

A manhunt was launched across the city, and there were fears that he might strike again.

The church where the priest ministered is well known to the sizeable Greek community in Lyon.

It is thought that there were no guards outside the Church, as there are at other Christian places of worship in France.

The wounded priest is a Greek national, said a spokesman for the local emergency services, who confirmed that his condition was ‘life threatening’.

Following the attack, French Prime Minister Jean Castex said: ‘This is a very serious incident. Details are still emerging. A crisis unit has been set up.’

Fanny Dubot, the Mayor of the 7th arrondissement of Lyon, said ‘the security initiative had been stepped up’ in Lyon since the Nice attack, but she was ‘not aware’ of specific measures being made to secure the Greek Orthodox church in her district.

Gerard Darmanin, France’s Interior Minister, confirmed he had opened a crisis unit in Paris, and told anyone in Lyon to ‘avoid the area and follow instructions’.

Those living in the area were told to lock themselves in their homes and stay away from public places.

It came on the day President Macron said it was ‘our duty to protect our freedoms’ as furious protests continued to rage against Charlie Hebdo cartoons of the Prophet Mohammed that he has backed.

Mr Macron told Qatar-based TV channel Al-Jazeera: ‘I can understand that people could be shocked by the caricatures but I will never accept that violence can be justified.

‘I consider it our duty to protect our freedoms and our rights.’

There have been numerous calls from Al-Qaeda to attack French interests..

It follows an Islamist terrorist murdering three people in a Catholic basilica in Nice, in the South of France, on Thursday.

Brahim Aoussaoui, a 21-year-old Tunisian, survived despite being shot 14 times by police, and is currently under armed guard in a secure hospital wing. 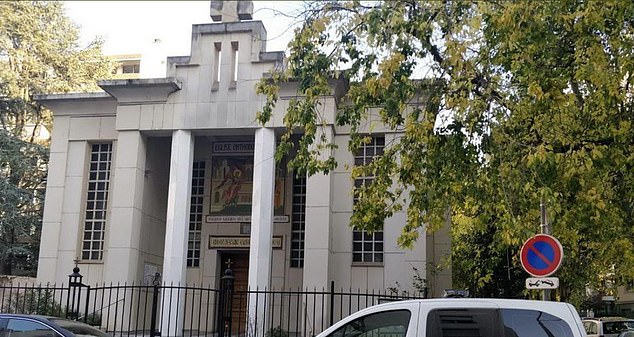 Pictured: The Greek Orthodox church in Lyon where a priest was shot earlier today

The attacks come amid fury across the Islamic and Arab world at President Macron for defending satirical cartoons mocking the Prophet Mohammed and the Muslims who revere him.

During a visit to emergency service personnel in Nice on Thursday, Mr Macron said: ‘We won’t give in. Once again, our country has been hit by an Islamist terrorist attack.

‘Once again, this morning, it was three of our compatriots who fell, in Nice, in this basilica. Very clearly, it is France that is under attack.’

The of the Nice attack was the same as that used to kill school teacher Samuel Paty in the Paris suburb of Conflans Sainte Honorine earlier this month.

Mr Paty was beheaded by an 18-year-old Chechen refugee after the teacher showed the Charlie Hebdo cartoons to children.

Mr Macron had placed 4000 extra soldiers on the streets of France, in part to protect churches and other places of worship.

Fury against French President Emmanuel Macron continues to rage across the Muslim world as protests were held today in India, Pakistan and Iraq over the premier’s stance on Charlie Hebdo cartoons.

Macron has become the focal point of Islamic fury after defending Charlie Hebdo cartoons of the Prophet Mohammed which were used as justification for a teacher’s murder in the Paris suburbs two weeks ago.

Protests are being staged across the Muslim world, with demonstrations seen today in Iraq, Pakistan, Yemen, and India. 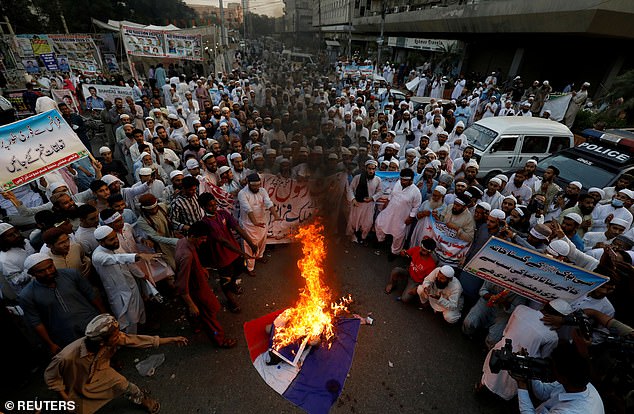 People chant slogans as they set fire to France’s flag during a protest against the cartoon publications of Prophet Mohammad in France and comments by the French President Emmanuel Macron, in Karachi, Pakistan today 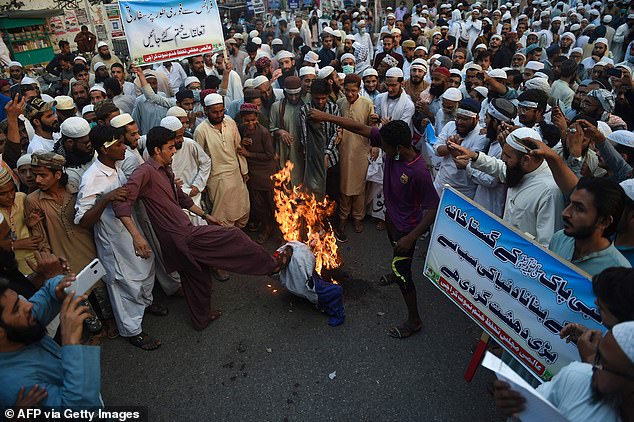 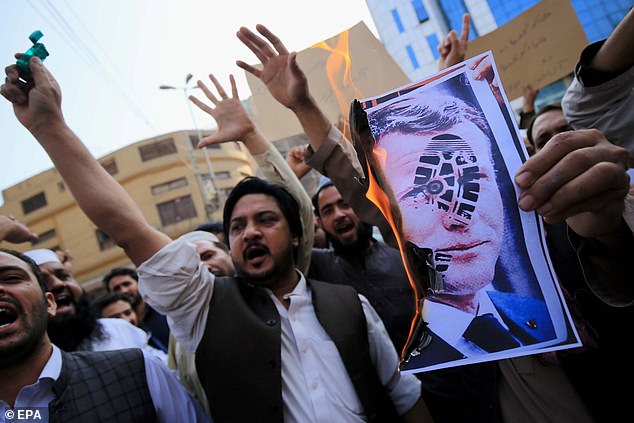 People burn a picture of French President Emmanuel Macron during a protest against his comments about Prophet Muhammad caricatures, in Peshawar, Pakistan today 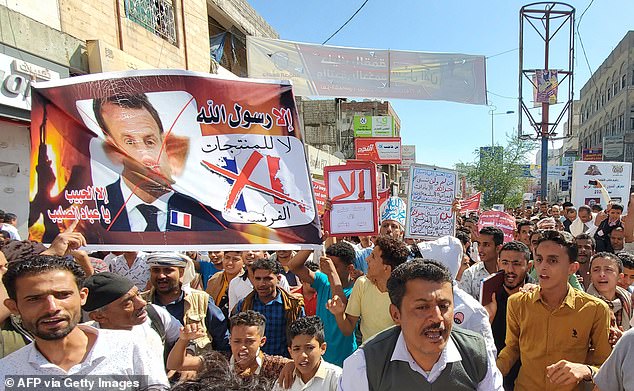 Demonstrators chant slogans as they march with a large banner calling for a boycott of French products and depicting French President Emmanuel Macron with the nose and ears of a pig, during a rally protesting against the comments of Macron over Prophet Mohammed cartoons in Yemen’s country’s third-city of Taez today

Turkish President Erdogan said Wednesday that Western countries mocking Islam wanted to ‘relaunch the Crusades’, heightening a confrontation with France over cartoons of the Prophet Mohammad that have stirred anger in Muslim-majority countries.

In a speech to lawmakers of his AK Party in parliament, President Tayyip Erdogan also said that standing against attacks on the Prophet was ‘an issue of honour for us’, suggesting Ankara may be digging in for a prolonged standoff.

The row with France flared after a French teacher who showed pupils cartoons of the Prophet published in the French satirical weekly Charlie Hebdo was beheaded in France this month. 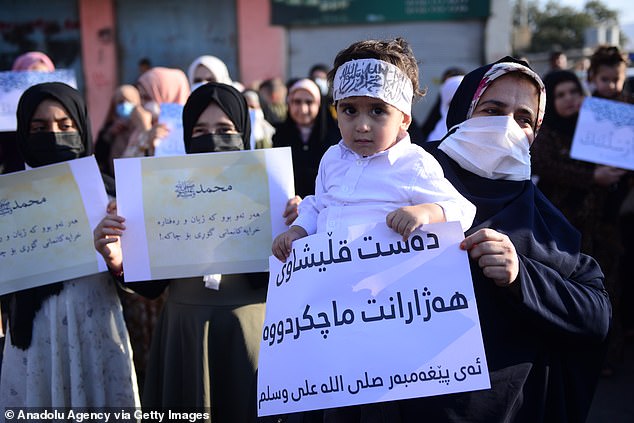 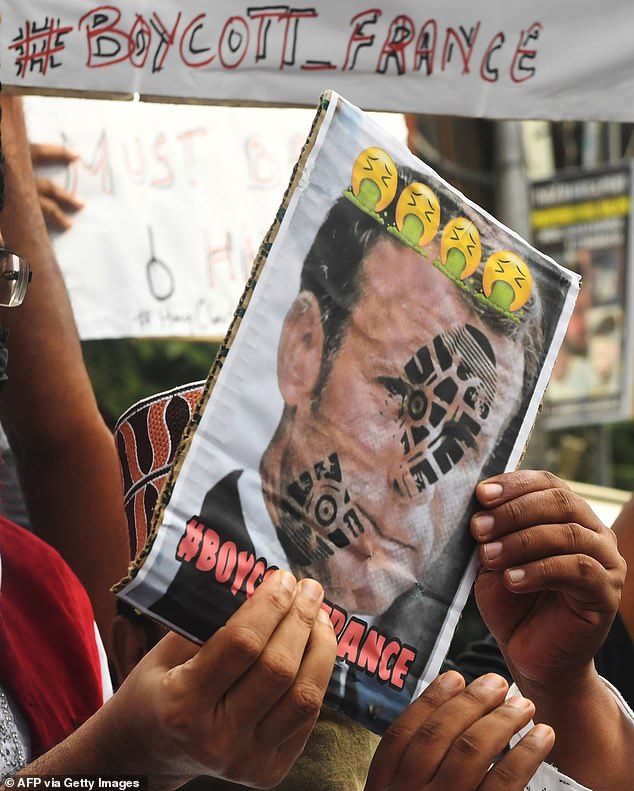 The caricatures are considered blasphemous by Muslims.

In a sign of spreading anger at France’s defence of the right to publish the cartoons, demonstrators denounced France in street protests in several Muslim-majority countries.

‘France down, it insulted our Prophet,’ shouted protesters in the Somali capital Mogadishu.

Erdogan sharply criticised Macron at the weekend, saying the French leader needed a mental health check, prompting France to recall its ambassador from Ankara. On Monday, Erdogan urged a boycott of French products.

The Turkish leader again questioned Macron’s state of mind on Wednesday and, in remarks addressed to ‘the West’, described colonial powers as ‘murderers’ for their record in Africa and the Middle east. 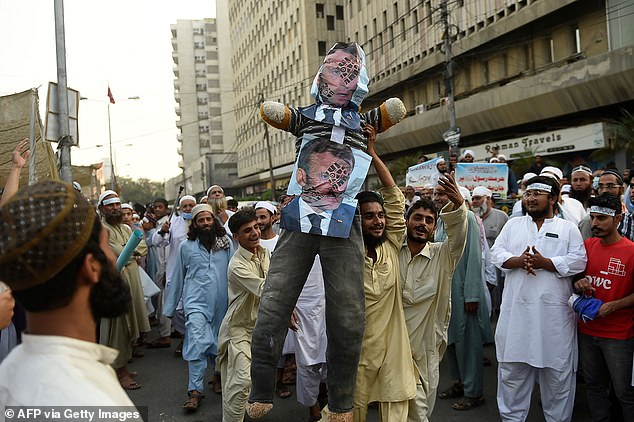 A protester carries an effigy of French President Emmanuel Macron during an anti-French protest in Karachi on October 31, 2020 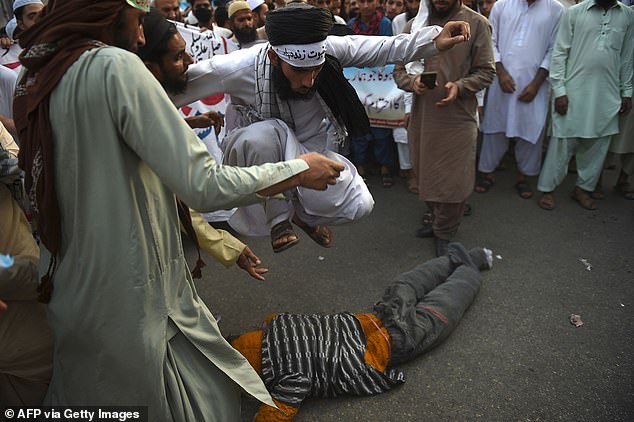 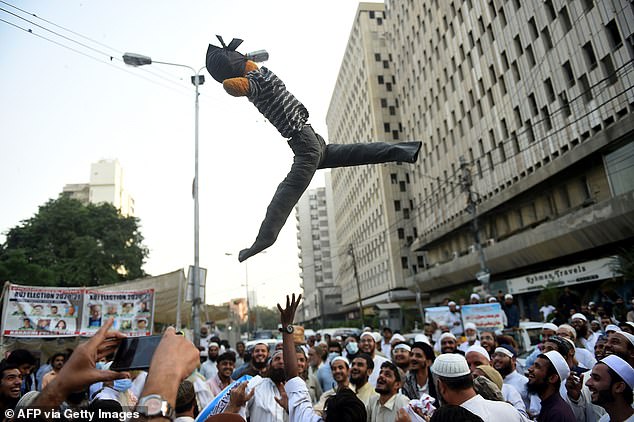 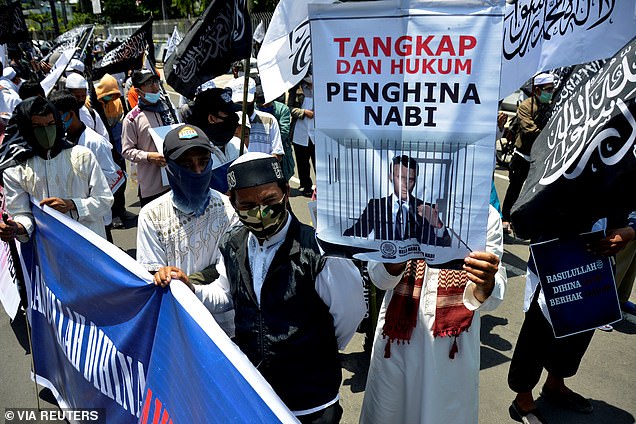 ‘They literally want to relaunch the Crusades. Since the Crusades, the seeds of evil and hatred have started falling on these (Muslim) lands and that’s when peace was disrupted.’

Turkish officials said separately Ankara would take legal and diplomatic steps in response to a caricature of Erdogan in Charlie Hebdo, which officials called a ‘disgusting effort’ to ‘spread its cultural racism and hatred’.

The cartoon on the cover of Charlie Hebdo showed Erdogan sitting in a white t-shirt and underpants, holding a canned drink and lifting the skirt of a woman wearing an Islamic hijab to reveal her naked bottom. 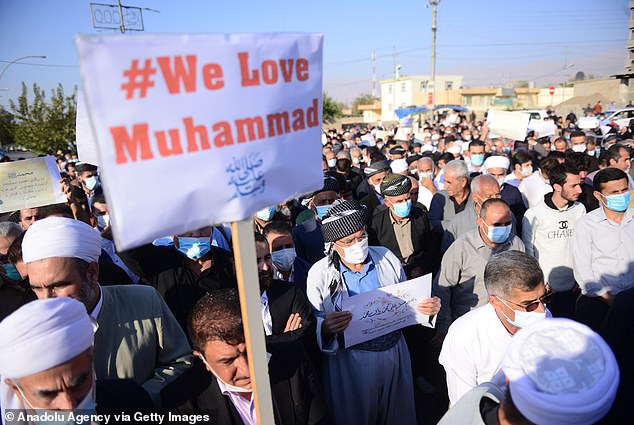 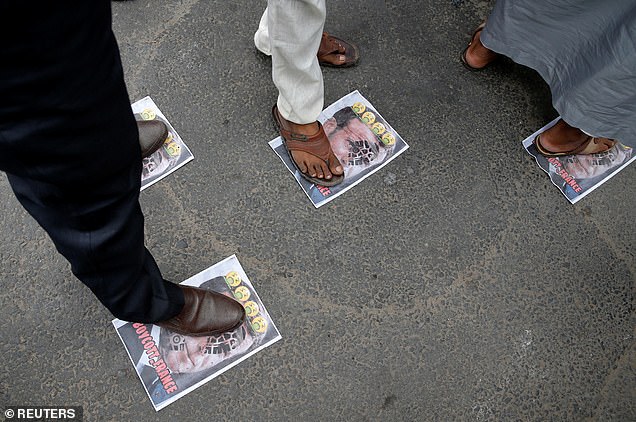 Demonstrators stand on defaced posters of France’s President Emmanuel Macron on a road during a protest against the publications of a cartoon of Prophet Mohammad in France and Macron’s comments, outside a French consulate in Kolkata today 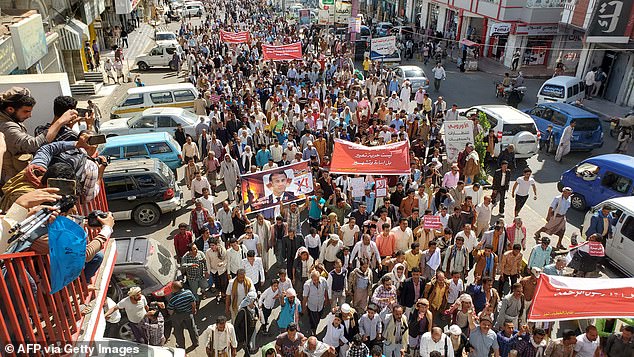 ‘Our battle against these rude, ill-intentioned and insulting steps will continue until the end, with reason but determination,’ Turkey’s Communications Directorate said.

The row has its roots in a knife attack outside a French school on Oct. 16 in which a man of Chechen origin beheaded Samuel Paty, a teacher who had shown pupils cartoons of the Prophet in a civics lesson.

The French government, backed by many citizens, saw the beheading as an attack on freedom of speech, and said it would defend the right to display the cartoons. 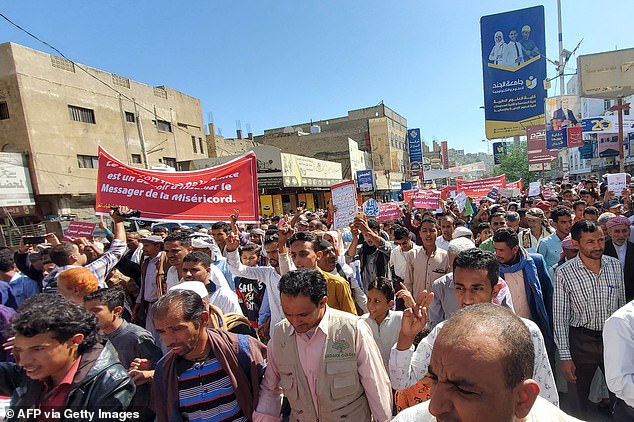 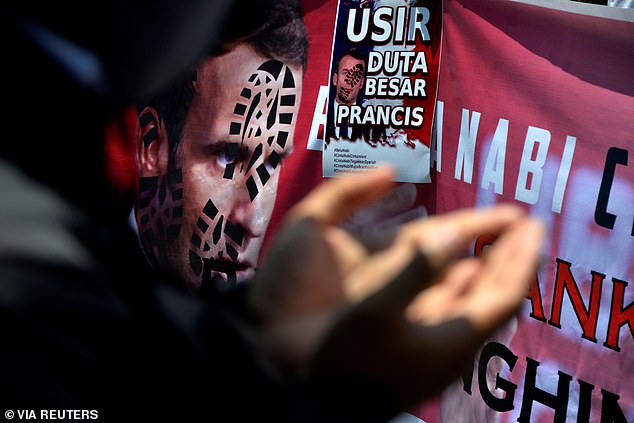 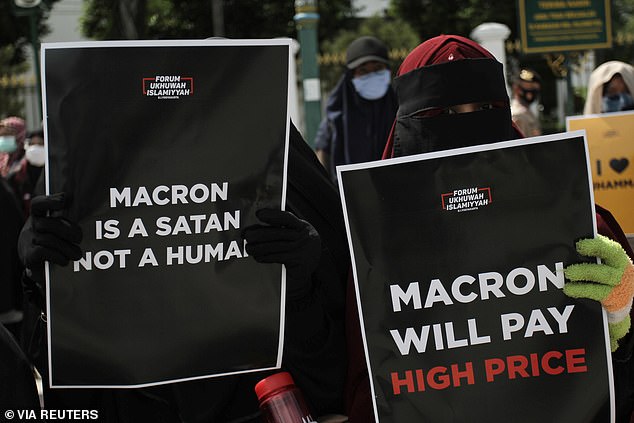 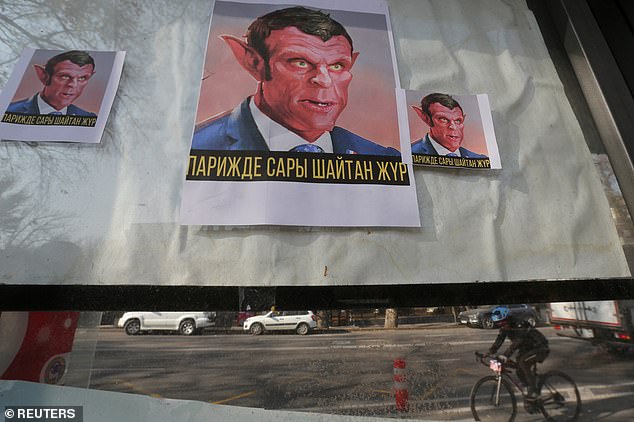 Placards reading ‘The yellow Devil is in Paris’ hang in a window as a mark of a protest against the publications of a cartoon of Prophet Mohammad in France and French President Emmanuel Macron’s comments, in Almaty, Kazakhstan today

France’s foreign ministry on Tuesday issued safety advice to French citizens in Indonesia, Turkey, Bangladesh, Iraq and Mauritania, advising them to exercise caution. They should stay away from any protests over the cartoons and avoid any public gatherings.

In Cairo, Egypt’s President Abdel-Fattah al-Sisi said freedom of expression should stop if it offended more than 1.5 billion people.

The Grand Imam of Egypt’s al-Azhar university, one of the world’s most eminent seats of Sunni Muslim learning, urged the international community to criminalise ‘anti-Muslim’ actions. 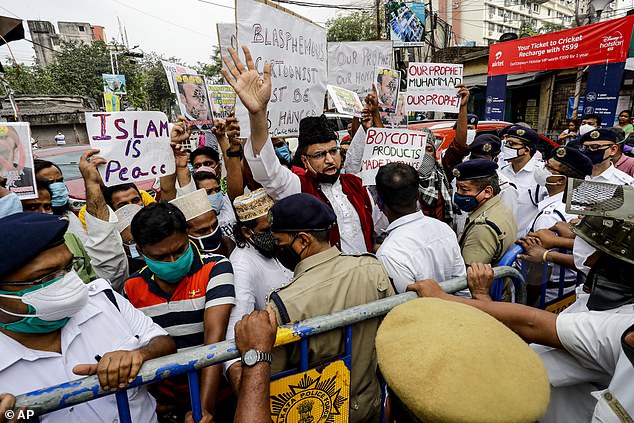 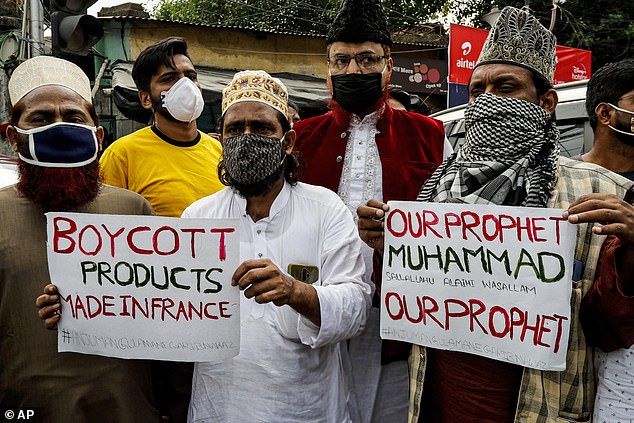 Muslim activists from various organizations participate in a protest against France, near the French Consulate, in Kolkata, India today 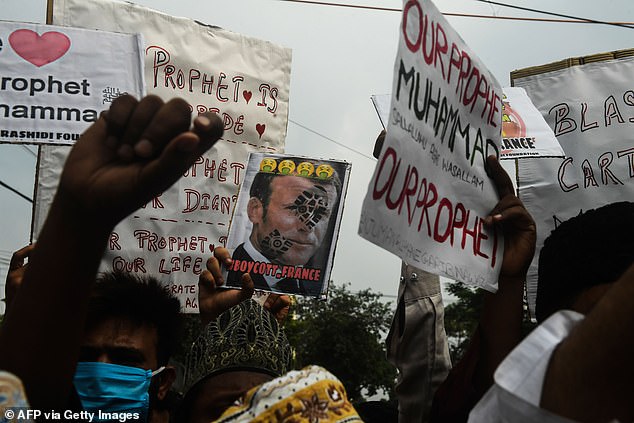 Indonesian president Joko Widodo today condemned what he called ‘terrorist’ attacks in France, but also warned that remarks by President Macron had ‘insulted Islam’ and ‘hurt the unity of Muslims everywhere.’

Conservative Islamic organizations in Indonesia, the world’s largest Muslim-majority country, have called for protests and boycotts against France, sharing an image of Macron as a red-eyed devilish snail.

‘Freedom of speech that injures the noble purity and sacred values and symbol of religion is so wrong, it shouldn’t be justified and it needs to stop,’ the Indonesian leader, who is known by his popular name Jokowi, said in a televised address.

He added, however, that ‘linking religion to acts of terrorism is a massive mistake. Terrorists are terrorists.’ 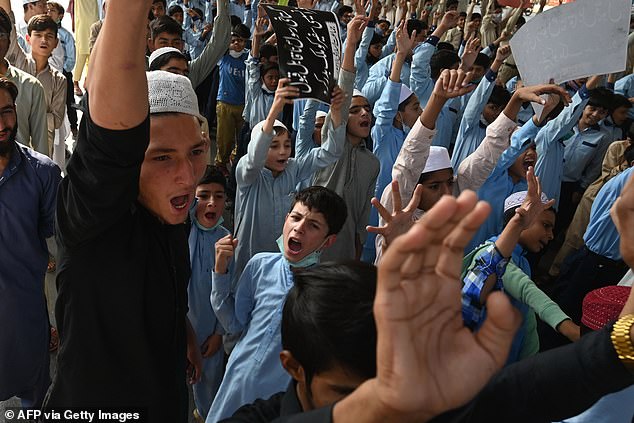 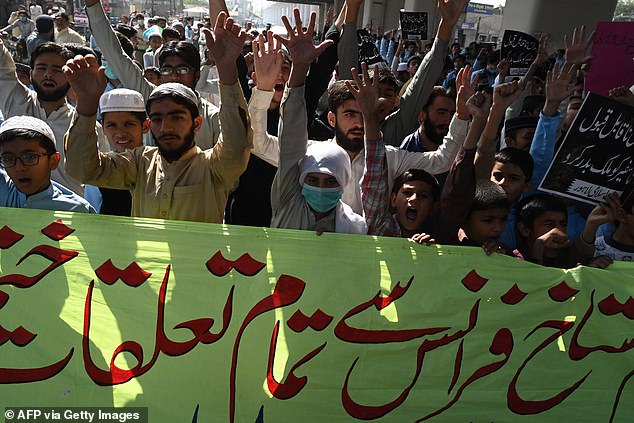 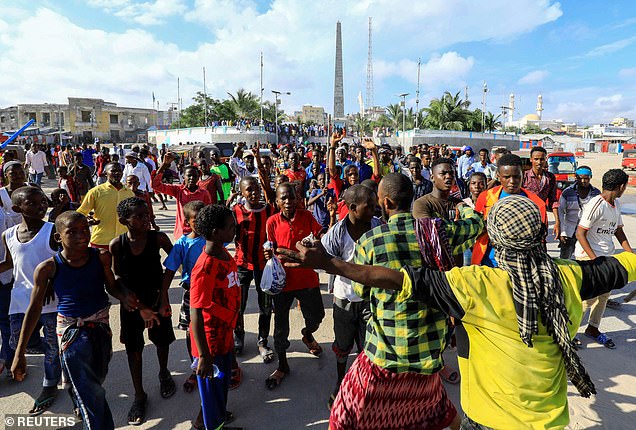 Somalis march during a protest against the publications of a cartoon of Prophet Mohammad in France and French President Emmanuel Macron’s comments, along the streets of Mogadishu, Somalia yesterday