Greta Thunberg has joked that her ‘evil handlers can no longer control her’ in a tongue-in-cheek tweet marking her 18th birthday.

The activist sarcastically hit back at critics who claim parents secretly masterminded her rise to global notoriety by saying she is ‘free at last’ now she has turned 18.

Miss Thunberg said she would be spending her birthday night in her ‘local pub’ as Sweden‘s minimum drinking age is 18.

There, she will be ‘exposing all the dark secrets behind the climate and school strike conspiracy’ in reference to those who falsely believe global warming is a lie.

Along with her humourous caption, the 18-year-old shared a selfie, giving a thumbs-up to the camera while wearing a shirt reading ‘flat Mars society’.

It appears to be a sarcastic reference to the Flat Earth Society whose members tout the bizarre conspiracy theory that the Earth is a disk surrounded by an ice wall. 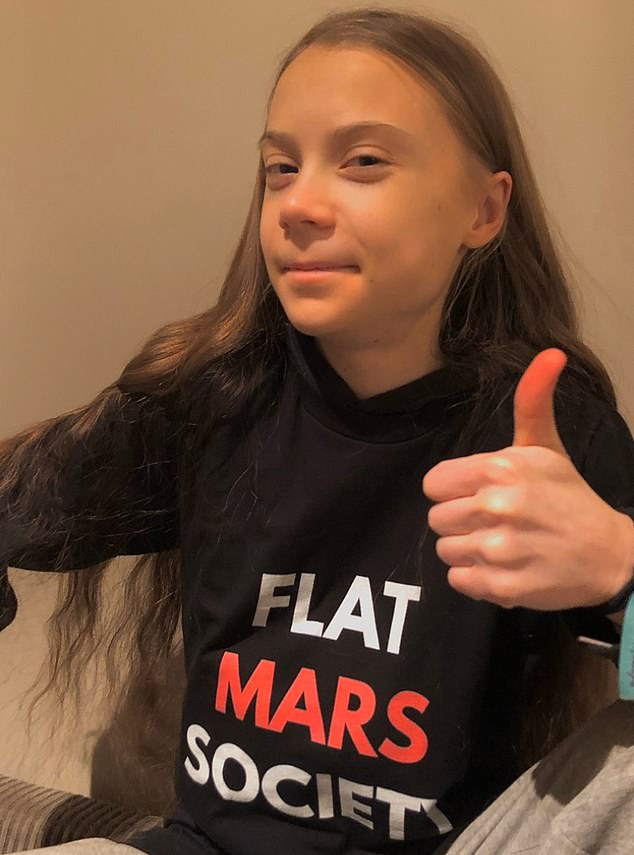 Greta Thunberg has joked that her ‘evil handlers can no longer control her’ in a tongue-in-cheek tweet marking her 18th birthday. She shared the caption along with a selfie (pictured) 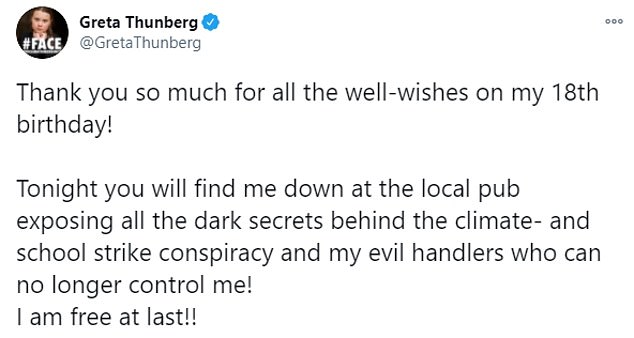 The activist jokingly hit back at critics (her tweet, pictured) who claim parents secretly masterminded her rise to global notoriety by saying she is ‘free at last’ now she has turned 18

Her post read: ‘Thank you so much for all the well-wishes on my 18th birthday!

‘Tonight you will find me down at the local pub exposing all the dark secrets behind the climate and school strike conspiracy and my evil handlers who can no longer control me! I am free at last!’

In an interview ahead of her milestone birthday, Miss Thunberg said she ‘doesn’t care’ about the jet-setting exploits of celebrities who preach about the environment.

The teenage activist became the face of the youth climate movement after launching a solo ‘school strike’ outside the Swedish parliament aged just 15.

Since then, Miss Thunberg has spoken at the United Nations climate summit, been nominated for a Nobel peace prize and was dubbed Time magazine’s 2019 person of the year.

But she said her global superstardom won’t last forever so is trying to ‘use her position’ to get as much done as possible ‘in this limited amount of time’.

Speaking in an interview with The Times, the 17-year-old was asked how she feels about celebrities who travel the world in gas-guzzling planes while preaching about climate change. 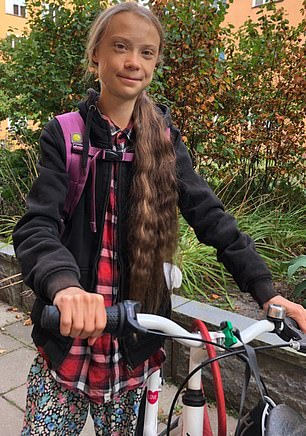 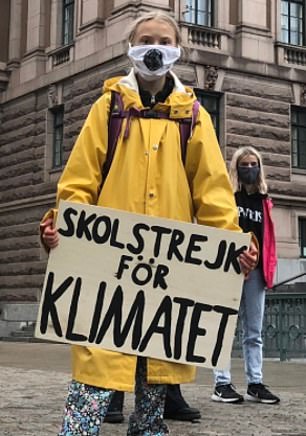 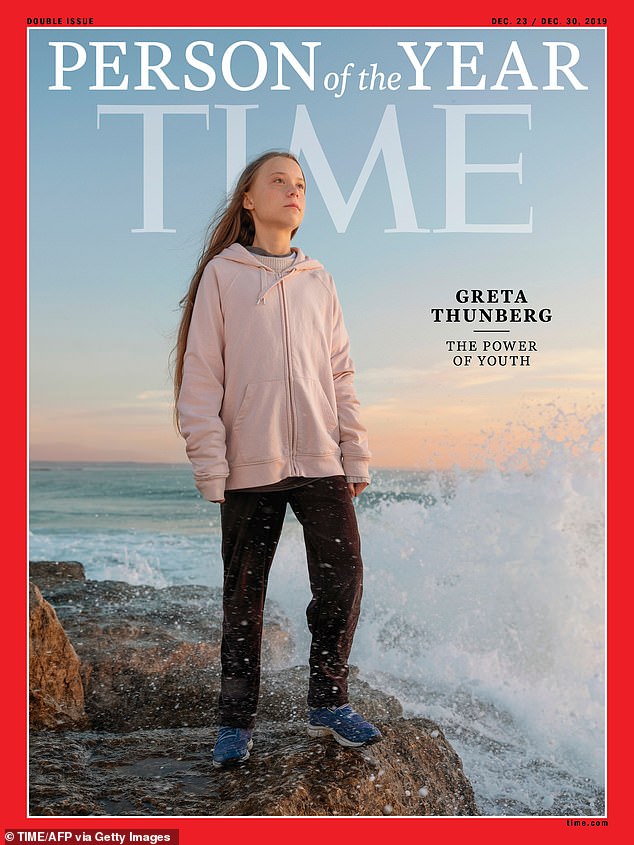 Miss Thunberg has spoken at the United Nations climate summit, been nominated for a Nobel peace prize and was dubbed Time magazine’s 2019 person of the year (pictured)

She simply replied: ‘I don’t care.’

Prince Harry and Meghan Markle were criticised for using private jets in 2019 – including four trips in just 11 days in August – despite their eco credentials.

Miss Thunberg said: ‘I’m not telling anyone else what to do, but there is a risk when you are vocal about these things and don’t practise as you preach, then you will become criticised for that and what you are saying won’t be taken seriously.’

The teenager – who has Asperger’s  syndrome – was critical of Boris Johnson’s ten-point ‘green industrial revolution’.

The Prime Minister launched a £12billion plan for the environment last year, saying it could create 250,000 jobs and significantly slash the country’s carbon emissions.

Among the ambitious proposals are plans to ban new sales of petrol and diesel cars by 2030, install thousands of offshore wind turbines and plant 75,000 acres of trees per year. 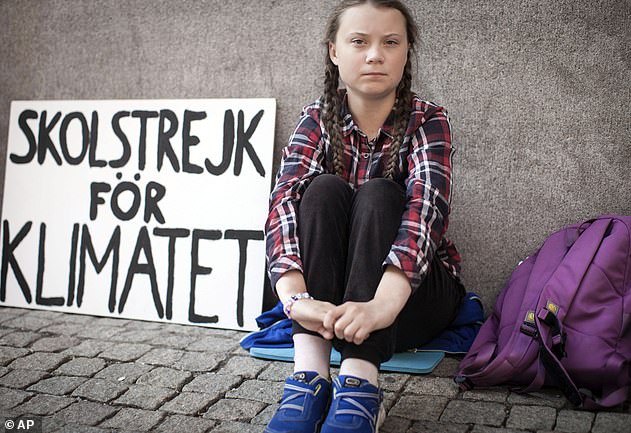 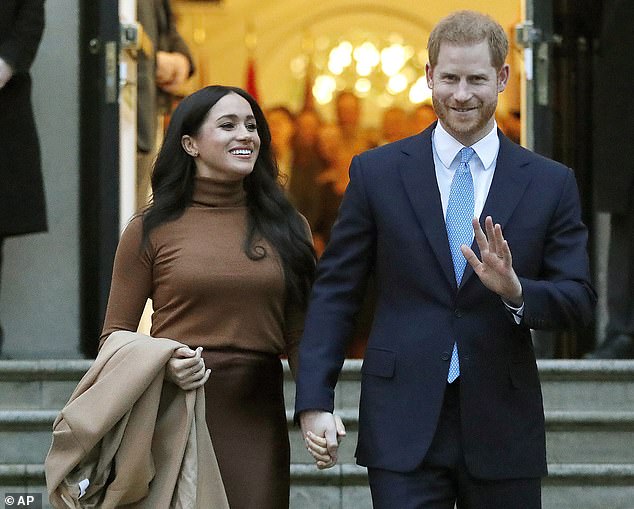 Miss Thunberg said that while the proposals were seen as better than the Government doing nothing – she pointed out that scientists have criticised it for not doing enough to tackle climate change.

In the interview, the activist also said that she doesn’t mull over criticism levied at her from world leaders.

In 2019, Miss Thunberg shouted ‘How dare you?’ during the UN General Assembly – claiming that country heads were failing the younger generation.

US President Donald Trump sarcastically said of her UN Speech: ‘She seems like a very happy young girl looking forward to a bright and wonderful future. So nice to see.’

Last December, President Trump told Miss Thunberg to ‘work on her anger management problem’ and ‘get a good old-fashioned movie with a friend’ after she became the youngest person to be awarded with Time magazine’s Person Of The Year accolade.

After she was named Person Of The Year by Time Magazine, President Trump said Thunberg needed to ‘chill’ and ‘work on her anger management problem’ 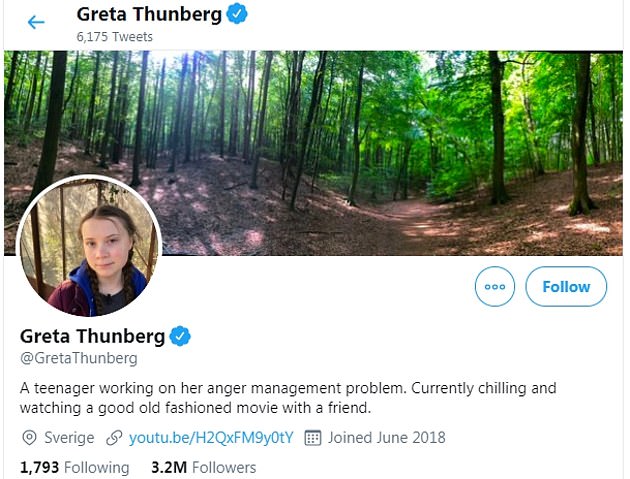 In November, Miss Thunberg threw the criticism back at him.

Last month, the activist said she was celebrating being back in school but accused nations of ignoring climate experts, despite the pandemic showing the importance of following science.

Miss Thunberg took a gap year from 2019 in a bid to force leaders from around the world to take action on climate change. 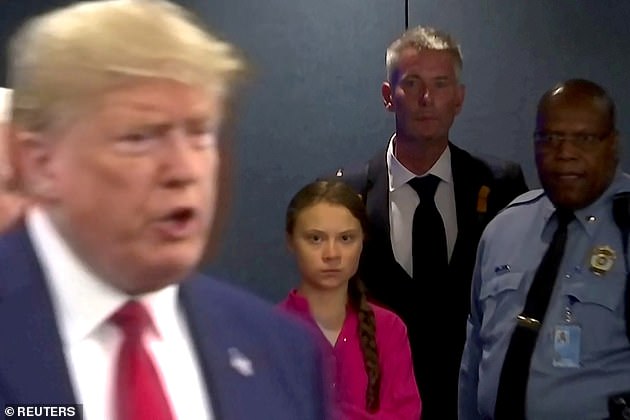 As her studies get back under way she told novelist Margaret Atwood during her guest editorship of BBC Radio 4’s Today programme the coronavirus crisis has ‘shone a light’ on how ‘we cannot make it without science’.

And she accused the world of listening to ‘one type’ of scientist, and ignoring others warning of climate change.

When asked if the pandemic’s impact on people’s appreciation of science could have an effect on climate information the teenager said: ‘It could definitely have.

‘I think this pandemic has shone a light on how … we are depending on science and that we cannot make it without science.

‘That of course needs to change.’

Earlier she had shared a picture of herself on a bike with her school rucksack over her shoulder as she celebrated returning to education.

But the environmental campaigner expressed scepticism when questioned about nations’ pledges to reduce their carbon emissions, such as China which has committed to reach a net zero target by 2060.

She said: ‘That would be very nice if they actually meant something.

‘We can’t just keep talking about future, hypothetical, vague, distant dates and pledges. We need to do things now. And also net zero … that is a very big loophole, you can fit a lot in that word net.’

But she praised the election of Joe Biden as US president who has pledged to rejoin the Paris climate accord on the first day of his presidency.

Miss Thunberg added: ‘It could be a good start of something new.

An emergency landing of a Turkish cargo plane in Istanbul