Group of hoons perform burnouts on the Gateway bridge in Brisbane, Queensland

A group of hoons have descended onto a busy highway doing burnouts across six lanes of traffic with passengers hanging out of windows.

The vehicles skidded dangerously down the Gateway bridge in the eastern suburbs of Brisbane and engulfed the highway in white smoke on Saturday, March 27.

A silver car continued to roar down the road as other vehicles watched on and cheered while thick exhaust fumes filled the air. 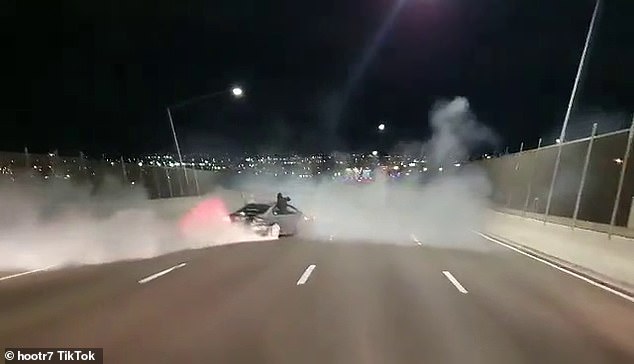 A group of hoons drove down the Gateway bridge in eastern suburbs of Brisbane and engulfed the highway in white smoke on Saturday, March 27

TikTok creator @hootr7 said they steered clear of the authorities while filming their wild night.

‘Thanks to the Gold Coast skid meets, we barely had trouble with cops and no Polair’, they said.

A Queensland police spokesman said investigators were aware of the video and believe it is linked to reports about a white Subaru that drove dangerously through North Brisbane.

Police arrested a motorist for driving over the legal alcohol limit and another for failing to wear a seatbelt.

Investigations are ongoing as police appeal for dashcam footage related to the incident.

The footage has received mixed reactions from viewers.

‘Yeah the boys,’ one person commented.

‘What idiots,’ another said. 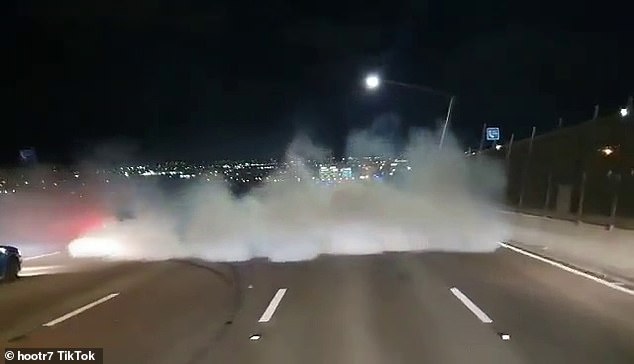