Guardiola: I hope to win the Champions League every year and RB Leipzig is a complex team 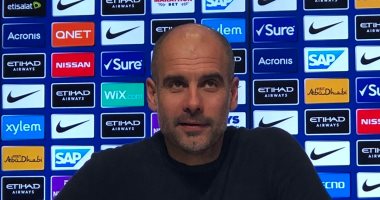 Manchester City coach Pep Guardiola spoke about his team’s match against Leipzig in the first round of the Champions League group stage..

Pep Guardiola said during the press conference for the European match: “It’s the first match in the group stage, every season is different, we gave an incredible tournament last season. We did a great performance in the group stage and that’s why we deserved to reach the final.”.

“Sports is always a new challenge, what happened in the past is in the past, we participate in this tournament feeling lucky, we will try to win the first match, and we will perform well tomorrow.”.

Guardiola continued: “Every season I start this tournament I am asked what I was a candidate to win, but I cannot tell you because I do not know, it is unpredictable, because there are a lot of strong teams, it is completely different since I started with Barcelona.”.

And Pep continued: “Tomorrow Leipzig, it is very important to start well, especially since, in our stadium, Leipzig has always been a complex team, we saw the philosophy of this club, with young players, who play specifically in all departments, we will go step by step. “.

Guardiola added: “People can say that the club failed, but it was an incredible achievement last season, now we start a new season and every team wants to win the championship.”

And the Manchester City coach added: “I always start this tournament with motivation. I’m very happy here, the club took a step forward last season, we improved a lot, we played 13 games and won 11.”

And he continued: “As for the loss of Lyon, I’m sure of that, the players have feelings, and spirit, and it hurts when you don’t achieve the achievement, for them, it’s a new challenge.”

“It depends on your style of play, injuries and mood. We are still in September, the final is in May, a lot of things could happen. The best lesson I learned is to focus on the next match.”

Pep continued: “When these players win 3 leagues out of the last 4, it gives the feeling that the team can do something better. They want it, the Champions League, but there are a lot of other teams that want it too.”.

He commented on the pressure of the fans to achieve the Champions League, saying: “I accept that, it is the same every year..

Pep concluded: “You can judge how successful I was in my time with City, I try to do my best every day, whether I win or not. People judge my work as I judge my players, and how great a job they did in the end. 5 years.

Mother reunited with her kidnapped daughter in Florida 14 years ago

Beware.. Processed foods and soft drinks will leave you with a rumen

Beware.. Processed foods and soft drinks will leave you with a rumen