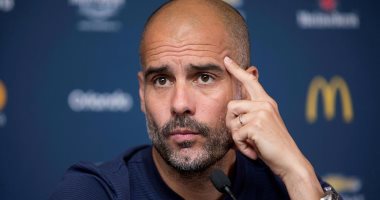 Manchester City coach Pep Guardiola has confirmed that he will not apologize to the team’s fans for the comments he made after facing Leipzig by inviting them to attend the matches.

Guardiola said in the press conference for the Southampton match: “Maybe the interpretation is wrong, this is not the first time I have said this, this also happened with Barcelona and Bayern Munich.”

Guardiola had demanded that more fans attend the Southampton match, so that there would not be nearly 20,000 vacant seats, as happened against Leipzig,
The official group of City fans did not like these statements, as Kevin Parker, the group’s general secretary, confirmed that “what he said surprised me a little.”

The City coach expressed his gratitude to the fans for their support of the team against Leipzig as well as outside the ground, adding: “I did not ask why the fans did not come, so whoever does not want to come, let him remain as he is, and I will not apologize to Kevin Parker for that.”

Guardiola commented on the possibility of facing Southampton without a spearhead.

Guardiola stressed the difficulty of facing tomorrow, pointing to the suffering against them in the two matches last season, where he said: “In their stadium, they were better than us in the first half hour and they disturbed us by creating many opportunities, so I do not expect the match to be easy.”

Manchester City meet Southampton at the Etihad Stadium at 4 pm tomorrow, as City wants to continue victories in the search for the title..

Manchester City beat Leicester City in the last round, with a goal without a response, to raise its score to 9 points, in fifth place on the table, while Southampton occupies the fourteenth place with 3 points.