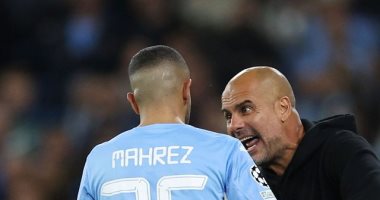 Manchester City coach Pep Guardiola revealed the details of the verbal altercation that occurred with the duo Jack Geralich and Riyad Mahrez during the activities of his team and the German Leipzig, which was held on Wednesday evening in the first round of the first group of the Champions League.

Pep Guardiola said during his comments immediately after the match about the strong instructions of Mahrez and Grelic: “We talked between the two halves about how we should play, but they did not do that, such discussions happen.”

Guardiola added: “I hope the fans will come to support the team on Saturday, we will be tired and need support, Southampton is a very difficult team.”

Pep Guardiola stressed: “The quality of Kevin De Bruyne with the ball .. What can I say? Even a blind man can see it.”

And Guardiola spoke about RB Leipzig: “They never give up, they have a special way of attacking, they play in a way to win all or nothing.”

Pep Guardiola pointed out: “We do not have a reason number capable of scoring 20-25 goals, for this reason we must play better, press better and make a lot of players reach the penalty area.”

Pep Guardiola explained: “We have a great team, from my first day here now, Man City have given me exceptional players and with a great mentality. This is a better concept and a nicer idea for the future.”

Pep Guardiola concluded: “9 goals in one game, that’s great for all the spectators, like RB Leipzig never gives up, one of the best teams in Germany, that’s why I’m very satisfied with the players who achieved their first victory in the group stage.”