By Peter Allen In Paris and Chris Jewers For Mailonline

A suspected terrorist thought to be wearing an explosive vest has been shot dead by French police near Paris after allegedly beheading another man with a knife.

Local reports have suggested the attack was motivated by cartoons of the prophet Muhammad.

The first bloodbath took place in Conflans-Sainte-Honorine, a suburb some 25 miles from the centre of the French capital on Friday.

‘The body of decapitated man was found at around 5.30 in the afternoon,’ said an investigating source.

‘When police arrived, the person thought to be responsible was still present and threatened them with his weapons.’

The unidentified killer then fled to the nearby town of Eragny-sur-Oise, around two miles away, where he refused to surrender. 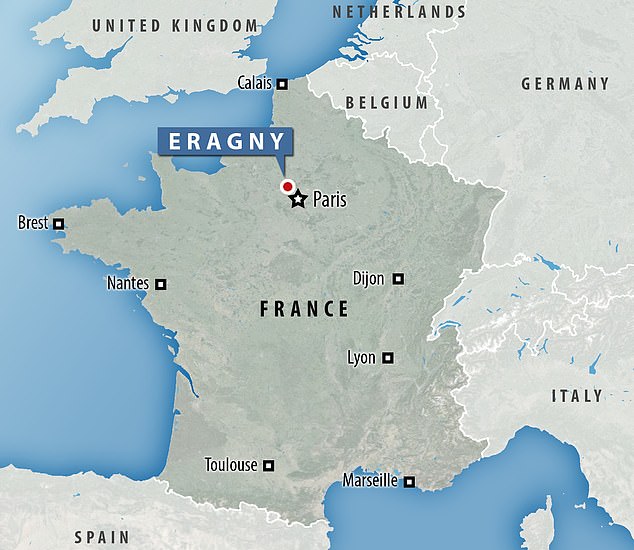 The unidentified killer fled to the nearby town of Eragny-sur-Oise (pictured) around two miles away from where the alleged beheading occurred, where he refused to surrender and was shot dead by the police

‘He was waving a gun by this time and further threatened officers,’ said the source. ‘This is when he was shot dead by police.. Around ten shots were heard.’

Agence France-Presse reported that the person was shot at around 5pm local time (4pm GMT) near a school.

Anti-terrorist prosecutors immediately became investigating the incident, said the source, who said the attacker was being viewed as a ‘suspected terrorist’.

French news station FranceNews24 suggested that the attack was related to cartoons of the prophet Muhammad published by Charlie Hebdo.

Witnesses watched the man decapitating his unnamed victim – who was also male – in broad daylight, and close to a school.

Officers rushed to the scene after the alarm was raising, and watched the killer running away, towards Eragny.

By 7pm, the scene of the suspected murder, and the scene where the killer was himself gunned down, had been sealed off.

Interior Minister Gerald Darmanin was ‘making his way to the scene of the attack,’ said a spokesman for his ministry, who also confirmed as a terrorist enquiry.

There have been a series of bomb, gun and knife attacks carried out by Islamic State and al-Qaeda operatives in France, dating back to early 2015

Earlier in the year, two Paris-born gunmen linked to Al-Qaeda broke into the offices of the Charlie Hebdo satirical magazine, leaving 17 people dead inside and three outside.

The terrorist turned out to be a Tunisian immigrant who was shot dead by police.

In October last year, a radicalised computer operative working at the Paris Prefecture in central Paris stabbed four of his colleagues to death.

Daphne Caruana Galizia: Fight to uncover the truth behind her murder continues three years on

Water floods streets of Greek island of Samos after earthquake

Cut the cord for $10 monthly, but what's the catch?

Burnley manager Sean Dyche looks back at his eight years at Turf Moor with Clarets fan...

Stephen A. Smith slams Mike D'Antoni after he was hired to Nets' staff: 'Lucky to get that job'

Water floods streets of Greek island of Samos after earthquake