Gunman who shot dead schoolboy, 15, is identified as Yussuf Mustapha


A gunman aged 14 who murdered schoolboy Keon Lincoln in a vicious daylight gang attack in Birmingham has been jailed for life.

Yussuf Mustapha, whose identity was revealed by a judge at Birmingham Crown Court today, is facing a mandatory life sentence alongside three other teenagers convicted of murdering 15-year-old Keon near his home in Handsworth.

Keon was shot at and stabbed after trying to escape the shocking 30-second assault in January this year. He died two hours later at Birmingham Children’s Hospital from a gunshot wound to the stomach. A major artery had also been severed as he suffered eight sharp-force injuries.

In a haunting victim impact statement today, Keon’s mother said: ‘I am in a nightmare that I cannot wake up from. A piece of soul has been taken from me.’

Mustapha was convicted of murder by jurors earlier this month following a five-week trial. He told jurors he was not at the murder scene but admitted he had lied to police. The 14-year-old showed little emotion as the verdict was read out.

Lifting a court order banning the media from naming Mustapha, Lord Justice William Davis said it was in the public interest to name him and that the measure had represented a ‘substantial restriction’ on the press’s ability to report on the case.

The judge also said that a 16-year-old youth convicted of murder should be named. But the judge stayed the lifting of the order on the 16-year-old, pending the outcome of an appeal against his conviction. Neither youth’s address can be reported, the judge said.

Mustapha’s accomplices Michael Ugochukwu and Tahjgeem Breakenridge, both 18, were also convicted of murder and jailed for life. Kieron Donaldson, 18, was found guilty of unlawfully killing Keon after buying weapons used in the killing, and was sentenced to 12 years. 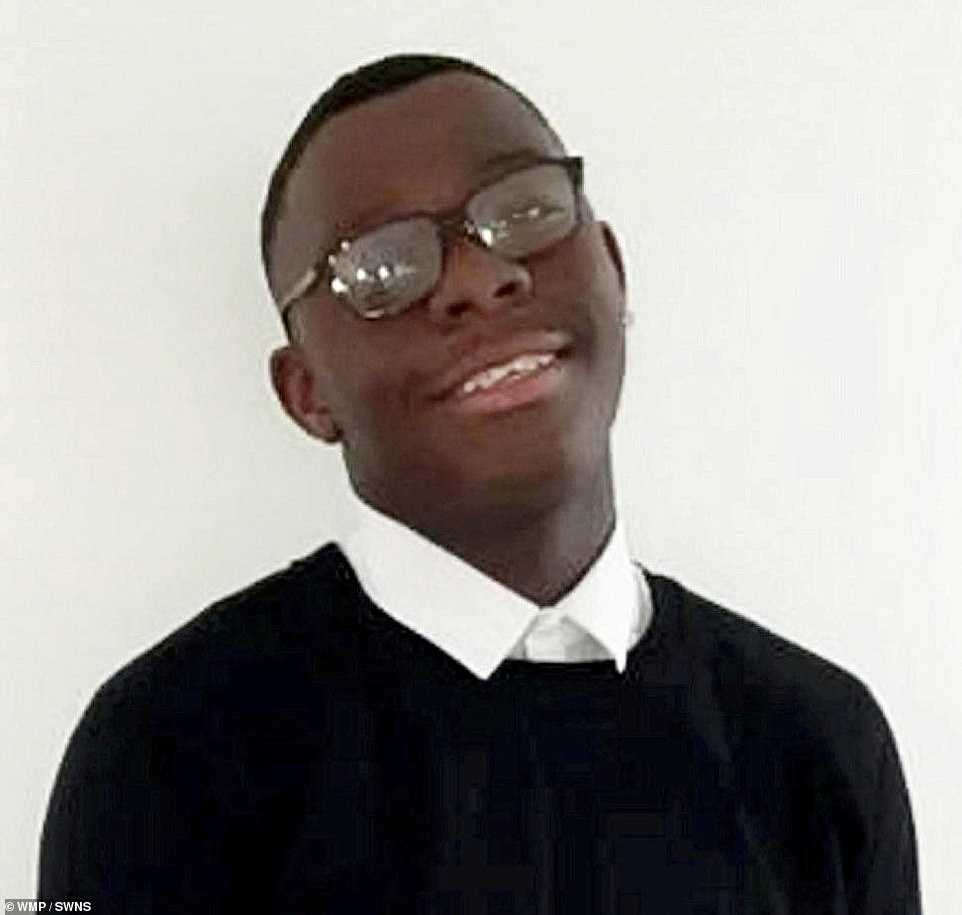 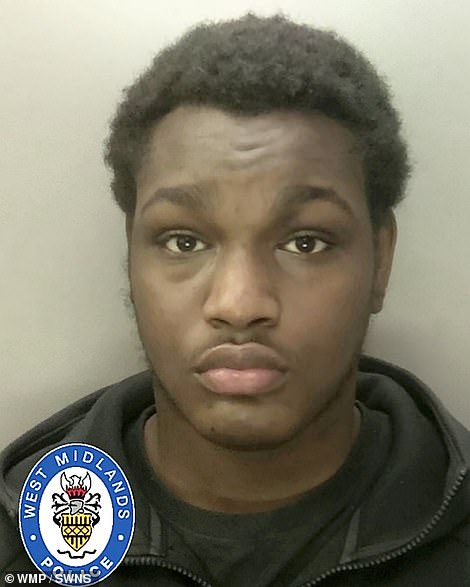 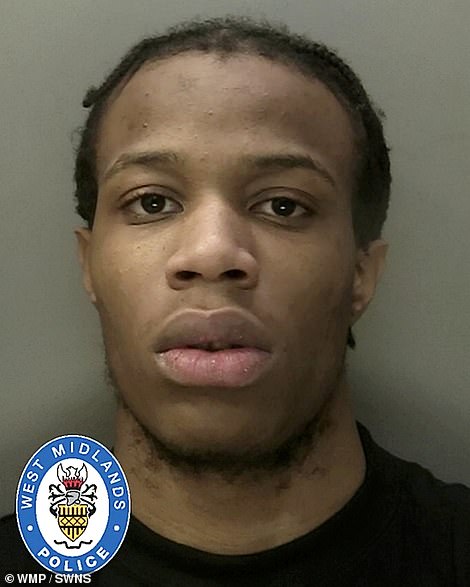 Tahjgeem Breakenridge, 18, and Michael Ugochukwu, 18, were also found guilty of murder after 15 hours and 50 minutes of jury deliberations spread over four days. 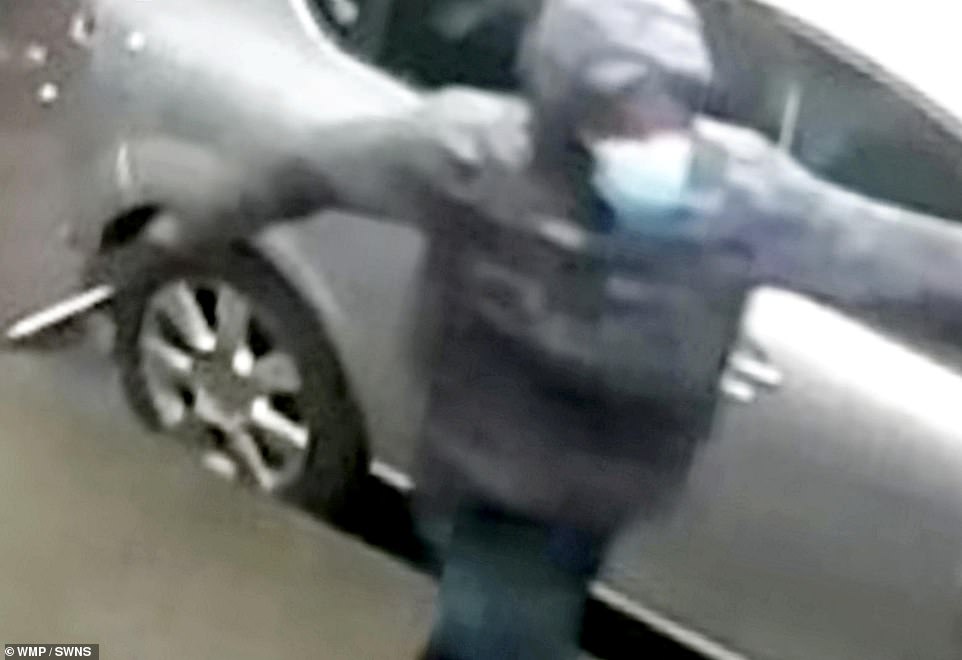 ‘I am in a nightmare that I can’t wake up from’: Haunting words of Keon’s mother read out in court today

I am in a nightmare that I cannot wake up from. A piece of soul has been taken from me. I hear the words his heart has stopped. Then I hear the words: ‘I’m sorry, we tried everything we could’.

I feel the chill through my veins as I held my boy’s ice cold body. I saw my beautiful boy’s body being lowered into the ground.

Gunshots ring in my ears knowing one of them ultimately ended my son’s life.

I miss my boy so much that it physically hurts. I’m still unable to come to terms with the fact you’re gone for good.

I can only hope there will come a day when the senseless murder of children will come to an end.

‘They had arrived in a stolen car, four of them had knives, one had a revolver which he shot, that was the fatal wound.

‘Keon’s mother was in the family home, she went out to find her son dying on the pavement having heard the gunshots outside. Not only had she been robbed of her son, but also had the experience and trauma of watching him die.

‘When a 15-year-old boy is killed in that way the first question anybody asks is ”why?” That question has never been answered. That doesn’t mean the murder was motiveless, it simply means neither I or the jury have any notion as to why.’

A five-week trial has been told Keon suffered eight sharp force injuries and a fatal injury to his abdomen from one of two gunshots fired in Linwood Road, Handsworth, at about 3.35pm on January 21.

The trial was told Breakenridge, of Balsall Heath, Ugochukwu, of Edgbaston, and the 16-year-old from Walsall were all caught on CCTV armed with long-bladed knives.

The court was told all the purchases were made online using Donaldson’s email address, but none of the knives were found when the police searched his home a month after the murder.

Detectives have said there is no evidence to suggest territorial gang rivalries were linked to the killing, and they could not say whether Keon was specifically targeted or if he was attacked ‘by chance’.

Pastor Neville Popo, a friend of Keon’s family, had called for an end to a so-called ‘postcode war’ at a vigil shortly after the murder.

Speaking after Keon’s killers were brought to justice, the pastor said the family were still trying to understand why he was attacked.

Describing Keon as a bubbly character who loved pranks and dancing, the clergyman said: ‘From then until now we’re still trying to come to terms with why – we still don’t know.

‘The crime that was committed on Keon is heinous, it’s diabolical, it’s unnecessary, it never needed to happen. We are trying come to terms with that and just want closure. 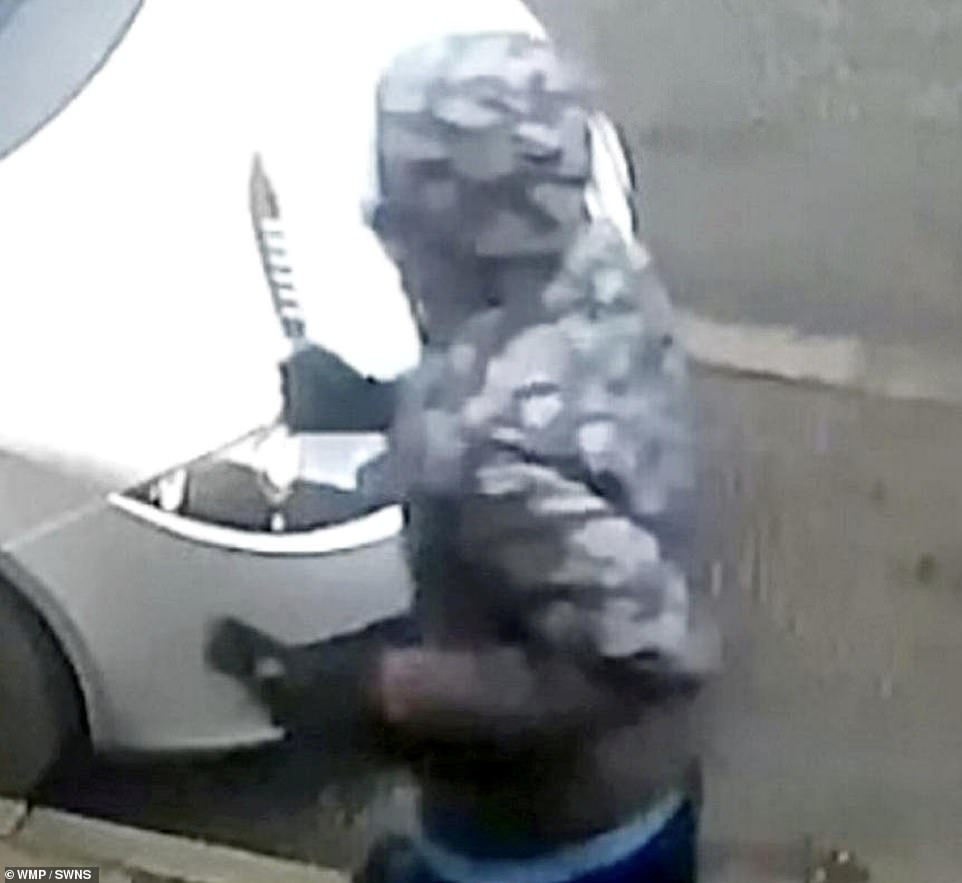 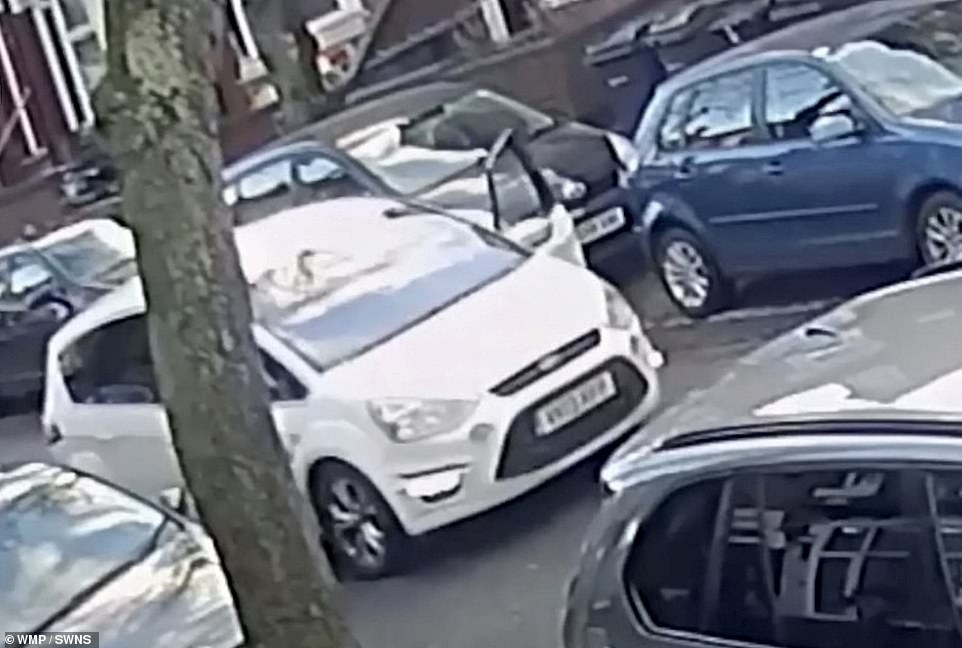 Opening the case for the Crown at the start of the trial, prosecutor Michael Burrows QC said a Ford S-Max, with stolen plates, (pictured) was used by those who attacked Keon 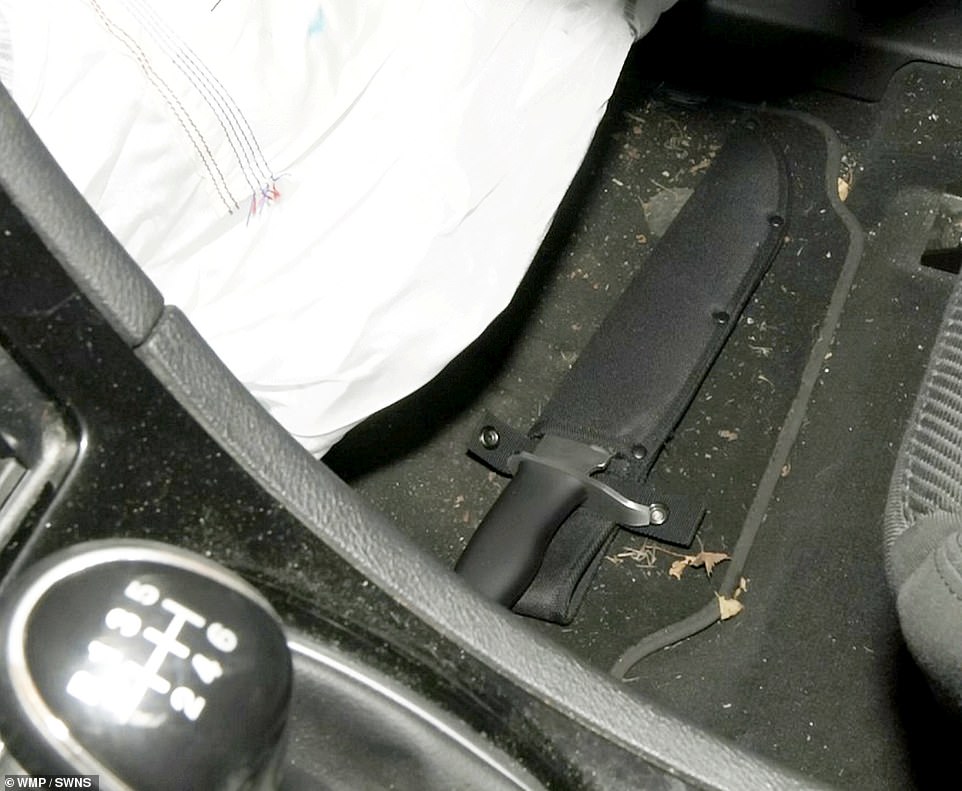 The getaway vehicle, which had been stolen and was on false plates, later crashed. Left behind was forensic evidence including a hunting knife (pictured)

‘It helps his mother to at least feel a bit more peace to know that those who did the crime are now behind bars.’

Paul Farrow, a specialist prosecutor at the CPS, said: ‘Our thoughts are with Keon’s family and friends during this difficult time.

‘While these convictions will never be able to replace what they have lost, I hope it gives them some comfort that those responsible have been held accountable for their actions.’

Opening the case for the Crown at the start of the trial, prosecutor Michael Burrows QC said a Ford S-Max, which had been stolen and had a false registration plate, was used by those who attacked Keon.

The vehicle later crashed in Wheeler Street, Birmingham, where forensic evidence including a hunting knife was recovered. 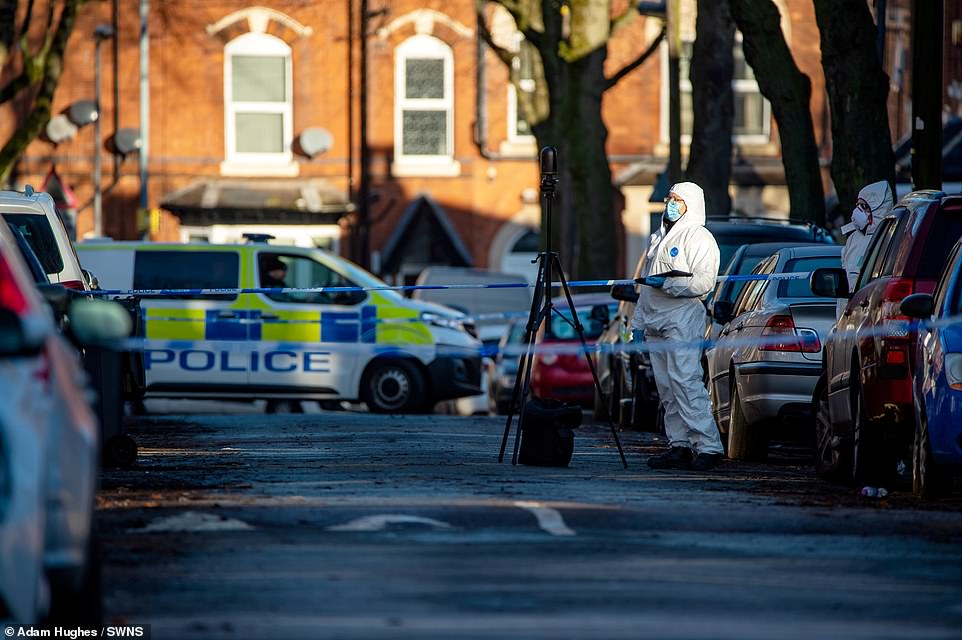 Keon was blasted twice by a 14-year-old gunman and stabbed ‘with large knives’ during a 30-second onslaught in Birmingham. Pictured: Police at the scene

CCTV cameras captured the hooded mob unleashing the attack, which continued even after Keon tried to get up and run away, the trial heard.

Prosecutor Michael Burrows QC told Birmingham Crown Court: ‘He [Keon] was shot at whilst he was on the ground. Still, the group continued to attack him, stabbing and hacking at him with large knives. Eventually, the group ran away and got back into a white Ford S-Max and that car was driven away from the scene.’

Footage showed that one suspect shot Keon twice including once in the stomach which later killed him, the jury was told.

Other CCTV shows Ugochukwu and Breakenridge casually walking down down the street towards Linwood Road, in Handsworth, prior to the killing.

Opening the case for the Crown at the start of the trial, prosecutor Mr Burrows said a Ford S-Max was used by those who attacked Keon. The getaway vehicle, which had been stolen and was on false plates, later crashed. Left behind was forensic evidence including a hunting knife, which was found in the footwell of the car.

Following Keon’s death, his mother, Sharmaine Lincoln, described her son as a joker and a ‘loving child with a jolly spirit’ whose ‘unbelievable laugh’ would echo daily around her home.

One in five people try dentistry at home including pulling out their own TEETH amid staff crisis at surgeries, report showsReport reveals millions of Britons are missing out...

Video duration 04 minutes 16 seconds 04:16The ambiguity surrounding the nature of the UN proposals on Sudan continues, as well as the possibility that their negotiation will eventually...