Gunmen kidnap ‘hundreds’ of boys from school in Nigeria, shooting one student dead during raid 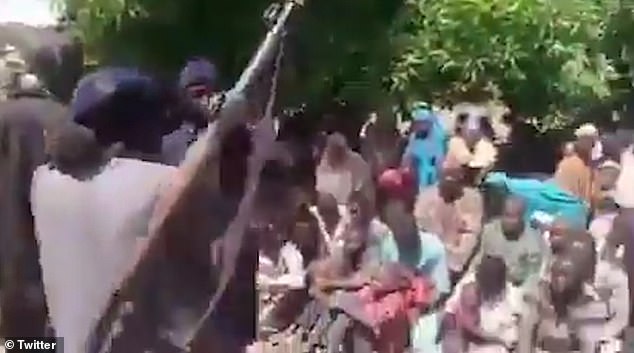 Gunmen kidnap ‘hundreds’ of boys from school in Nigeria, shooting one student dead during raid

By Ross Ibbetson For Mailonline and Afp

Gunmen last night kidnapped hundreds of schoolboys in Nigeria, shooting one of the pupil’s dead during the raid, security sources said.

Armed men raided the Government Science College at around 3am local time in Kagara, Niger state, in the country’s terror-ravaged north.

Footage shared online purportedly shows the thugs brandishing AK-47s and a rocket launcher in front of the children who can be heard wailing as the men yell ‘Allahu akbar’ and fire shots into the air.

No group has yet claimed responsibility for the raid which comes two months after Islamist terror faction Boko Haram kidnapped more than 300 boys from a boarding school in Katsina state.

Footage shared online purportedly shows the kidnappers brandishing AK-47s and a rocket launcher in front of the children who can be heard wailing as the men yell ‘Allahu akbar’ and fire shots into the air.

The school is in Kagara, Niger state, in the country’s northwest where it is feared that jihadists have successfully infiltrated bandit crews who were previously not motivated by ideology

The children were freed after a week of being moved around in the forest to hide them from the authorities.

Security sources today said that some of the students and staff in Kagara were able to escape but that one pupil was killed in the kidnap operation.

The raiders are believed to have taken the captives into a nearby forest.

The school has around 1,000 pupils and it was not immediately clear how many were taken.

‘A head count is underway to establish how many students were kidnapped,’ a security source said.

Troops with air support were tracking the thugs for a possible rescue operation, the source added.

The region is increasingly a hub for criminal gangs who raid villages, killing and abducting residents after looting and torching homes.

Bandits are known to hide in camps in Rugu forest, which straddles Zamfara, Katsina, Kaduna and Niger states. Despite the deployment of troops, deadly attacks persist.

There is growing concern they are being infiltrated by jihadists from the northeast who are waging a decade-old insurgency to establish an Islamic state.

‘Nigeria has to declare a state of emergency on insecurity,’ said Idayat Hassan, director of the Abuja-based Centre for Democracy and Development think tank.

‘The government must secure the schools and urgently too, or else these raids will encourage others to do worse.’

December’s raid on the school in Katsina state, in the country’s northwest, marked a major turning for Boko Haram who were thought to only have a minor presence in the area.

But concerns have grown of jihadist inroads into the region, especially after fighters claiming to be in the northwest released a 2020 propaganda video pledging allegiance to Boko Haram’s leader, Abubakar Shekau.

President Muhammadu Buhari has made the fight against the group a priority, but the security situation in northern Nigeria has deteriorated since his 2015 election.

The recent spate of abductions comes six years after more than 270 girls were taken from a school in Chibok, Borno state.

Only 164 have escaped, been freed or rescued.

That leaves another 112 still unaccounted for, their parents still desperately seeking answers over the fate of their girls.