Haaland, commenting on Borussia Dortmund’s difficult victory over Leverkusen: Praise be to God 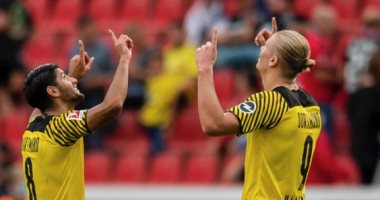 Norwegian striker Erling Halland, striker of the German team, Borussia Dortmund, posted a tweet through his account on the social networking site “Twitter”, in which he said, “Praise be to God,” in response to the marathon victory that the team achieved against Bayer Leverkusen today, Saturday, with four goals against three, in the confrontation that took place between them. At the Bay Arena, in the fourth round of the German Bundesliga championship 2021, after he turned two goals behind when the score was 3-1 to a valuable victory.

The goals of Borussia Dortmund, Norwegian star Erling Haaland, scored in the 37th and 77th minutes from a penalty kick, Julian Brandt in the 49th minute, and Rafael Gerrio in the 71st minute of the match.

Nagelsmann: Bayern’s victory over Leipzig is not surprising, and Barcelona without Messi is different