Half-dose of Oxford vaccine was NOT a ‘mistake’ and was known before people got jabs, scientists say


Oxford scientists say the more effective half-dose regimen of their coronavirus vaccine was not given by ‘mistake’.

In a hit back against claims that the team had accidentally given people the wrong doses of the vaccine, the researchers said they had known the doses would be smaller because of a manufacturing issue before they injected them.

A problem with the equipment that measured the strength of doses meant that one batch was ‘over-estimated’, so they toned it down to avoid giving people too much.

They pressed ahead with the trial, with the blessing of the UK’s drug regulator the MHRA, and gave those volunteers – and all other volunteers – full doses for the rest of the study, the team explained as their results were published yesterday.

And later, when those people didn’t get side effects that were as strong, the researchers found out exactly how much smaller the doses had been. The study results showed them that the vaccine was 90 per cent effective when given that way, compared to 62 per cent when given in two full doses.

The MHRA now faces a dilemma and must choose whether to give approval for the 90 per cent effective regime to be given to the public, despite a smaller amount of data – it was only given to around 2,000 people.

Professor Sarah Gilbert, who masterminded the potentially life-saving jab, said today it was ‘up to regulators’ to choose which regimen to rubber-stamp – but noted the half-dose had only been tested in under 55s.

‘They will consider all of the data that’s been submitted to them,’ she said, ‘and we do have measurements of the immune response in older people and show that it doesn’t decline at all in people even aged over 70’.

She has previously said the half dose may be more effective because it would prime the immune system before a second full dose triggers a stronger immune response.

Scientists are still in the dark about which dosing regime the MHRA will choose – or whether it is happy with both of them – but are confident the evidence is good enough for either to be approved. 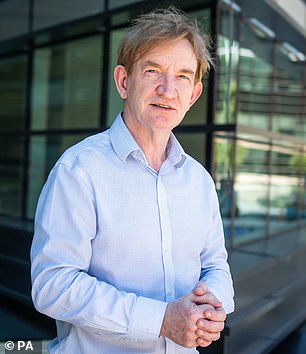 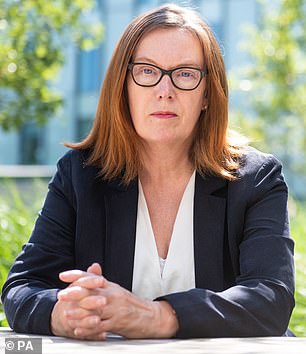 Professor Adrian Hill, from Oxford University, has insisted there was no error in dosing during their coronavirus vaccine trials. And Professor Sarah Gilbert, who masterminded the potentially world-saving jab, said it would be up to regulators whether to approve a two full dose regimen or a half dose and full dose 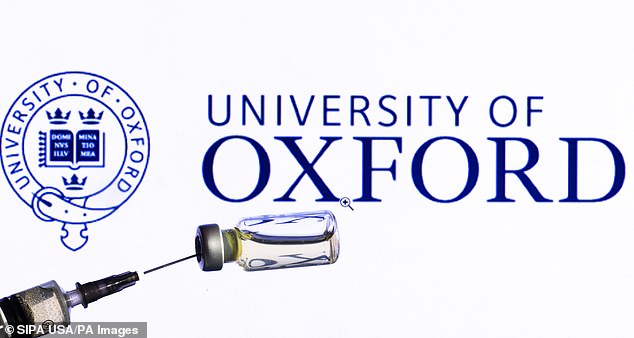 Scientists at the University of Oxford and British pharmaceutical company AstraZeneca have developed a coronavirus vaccine that a study shows is, on average, 70 per cent effective at preventing Covid-19

Professor Adrian Hill, from Oxford’s Jenner Institute, has insisted the team were fully aware of the change in doses before they checked the efficacy of the vaccine.

He said after the difference was identified the team opted to stick with a two full-dose regimen, but still monitor the volunteers who received a half-dose. Quickly they saw the latter may have worked better.

‘There were fewer sore forearms, less people with fever and so we knew within days that it was probably the other measure that was right and indeed it is,’ he told The Times.

‘We liked it so much we carried on with it because it was safer – lower doses often are – and equally immunogenic. And there is some evidence it may be more effective. So what’s not to like?’

Claims it had happened by mistake came after AstraZeneca’s head of biopharmaceutical research, Dr Mene Pangalos, said they didn’t realise about the half-dose until later in the trial.

How does the Oxford vaccine work?

The vaccine – called ChAdOx1 nCoV-19 – uses a harmless, weakened version of a common virus which causes a cold in chimpanzees.

Researchers have already used this technology to produce vaccines against a number of pathogens including flu, Zika and Middle East Respiratory Syndrome (Mers).

The virus is genetically modified so that it is impossible for it to grow in humans.

Scientists have transferred the genetic instructions for coronavirus’s specific “spike protein” – which it needs to invade cells – to the vaccine.

When the vaccine enters cells inside the body, it uses this genetic code to produce the surface spike protein of the coronavirus.

This induces an immune response, priming the immune system to attack coronavirus if it infects the body.

It was 62 per cent effective if given as two doses and 90 per cent when one half dose is given followed by a further full dose.

But the researchers say more studies are needed on the 90 per cent finding.

He told Reuters in November that the discovery that it worked better was a lucky accident. He said: ‘The reason we had the half dose is serendipity.’

Dr Pangalos said researchers were confused when they noticed volunteers in the vaccine group were reporting much milder side effects, such as fatigue, headaches and arm aches, than they originally predicted.

He said: ‘So we went back and checked … and we found out that they had underpredicted the dose of the vaccine by half.’

‘That, in essence, is how we stumbled upon doing half dose-full dose (group),’ he added. ‘Yes, it was a mistake.’

But the Oxford researchers now appear to refute describing the whole situation as a mistake, instead saying that it was a known manufacturing error that was clarified later on in the study.

Asked whether the half-dose version of the vaccine could only be approved for under-55s, Professor Gilbert told BBC Radio 4’s Today programme regulators could decide to approve the half dose and full dose regimen for all age groups.

‘What we need to do now is to look into the immune responses in people who got the different vaccination regimens and see if we can find an explanation for that, and that’s something we should be able to do.’

The MHRA has been considering whether to approve the vaccine since November 27, and is expected to reach a decision before the end of the year.

AstraZeneca, the pharmaceutical company producing the vaccine, has said the 62 per cent effectiveness seen in people who received two full doses of the jab was good enough to hit regulators’s standards around the world.

And Oxford’s own scientists suggest they expect approval for the original two-dose regimen before the end of this year, which could later be adapted to the more effective combination if data proves it is better.

Professor Andrew Pollard, director of the Oxford Vaccine Group, told MailOnline an MHRA decision was not imminent: ‘I would not expect them to be ready for their final review yet,’ he said.

But when they do decide, the trial’s chief investigator said the original plan, to give people two doses, looks most likely to succeed.

He said: ‘Everything strongly supports the strategy agreed with the regulators to use two full doses.

‘[Data from the half-dose group] is all supporting data that adds to the vaccine working. It’s great news that, however you look at the data, the vaccine is working.

‘It’s all very supportive of the vaccine meeting regulatory requirements.’ 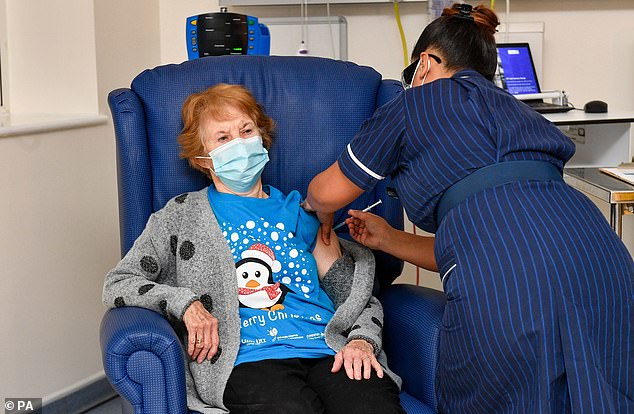 Margaret Keenan, a 90-year-old woman from Coventry, today became the first member of the public to get vaccinated against Covid-19 as the UK was the first in the world to start giving jabs to citizens

The Oxford trial became the first to publish its study in a medical journal, The Lancet, yesterday.

They confirmed preliminary results that were announced by the scientists at the end of November.

Those were that, in a group of 5,807 people given the vaccine, only 30 tested positive for coronavirus, compared to 101 out of 5,829 people given a fake jab.

Overall, the vaccine prevented 70.4 per cent of coronavirus cases among people who had the actual jab, the study said.

More detailed data showed that three out of 1,367 people who were given half a dose followed by a full dose got the illness, which was 90 per cent prevention, compared to 71 out of 4,455 who got the normal two full doses (62 per cent).

The 90 per cent protection would likely be preferable for regulators but there is a lot less data to prove it works, meaning it is possible that the results were a fluke, and it was not tested on anyone over the age of 55.

AstraZeneca’s head of biopharmaceutical research, Dr Mene Pangalos, has previously said the dosing difference was due to ‘serendipity’, or chance.

He claimed that researchers were confused when they noted some volunteers were reporting much milder side effects, such as fatigue, headaches and arm aches, than they originally predicted.

‘So we went back and checked … and we found out that they had underpredicted the dose of the vaccine by half,’ he said.

It comes as the UK today took a gigantic step towards finally ending the pandemic on what has been dubbed ‘V-Day’, after the NHS began the biggest vaccination drive in British history at 50 hospital sites.

At least 5,000 over-80s, care home staff and NHS workers were thought to have been inoculated yesterday with Pfizer/BioNTech’s Covid vaccine, which the MHRA approved last week.

HOW DO THE OXFORD, MODERNA AND PFIZER/BIONTECH VACCINES COMPARE?

Oxford University has published the findings from its second phase, which show the jab provokes an immune response and is safe to use – it is not yet clear how well it protects against coronavirus in the real world.

Recombinant viral vector vaccine – a harmless cold virus taken from chimpanzees was edited to produce the ‘spike’ proteins and look like the coronavirus.

UK has ordered five million doses which will become available from March 2021. Moderna will produce 20m doses this year, expected to stay in the US.

UK has already ordered 100million doses and is expected to be first in line to get it once approved.

Oxford and AstraZeneca said there are no serious safety concerns about the vaccine. Phase three trial saw three out of 23,745 participants have ‘serious adverse events’ that were ‘possibly’ linked to the vaccine. All three have recovered or are recovering, and remain in the trial.

LSU knew in 2018 that officials kept allegations against athletes in-house. It did nothing.

EA Acquires Glu Mobile for $2.1 Billion, One of the Biggest Gaming Acquisitions Ever

Human Rights Watch: Canada returns a girl from Syria without her mother

Couple who are STEP-SIBLINGS divide TikTok with their bizarre videos