One-third of breast cancer patients may be hesitant to receive the COVID-19 vaccine, a new study suggests.

Of 619 women who responded to a survey on breast cancer-related social media pages, 183, or 34 percent, said they were tentative to get immunized against the virus.

More than 50 percent of the women said they feared adverse reactions and about one-fifth distrust the health care system.

The women also reported that they were most likely to be motivated to take the vaccine if it was recommended to them by their oncologist. 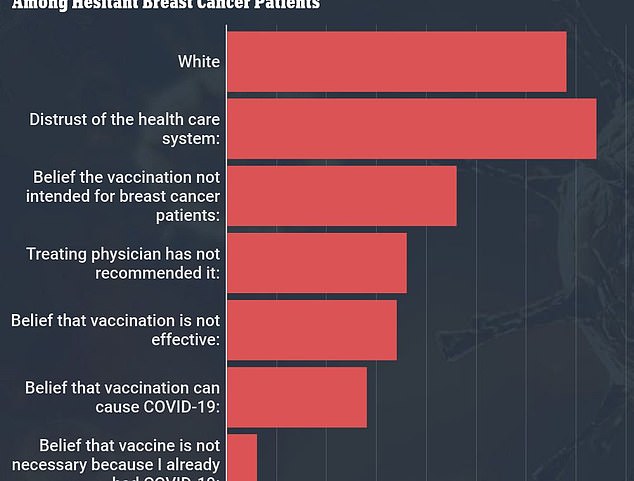 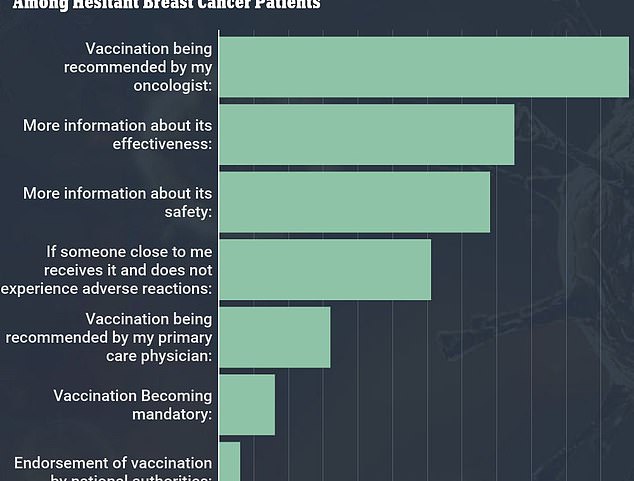 Among the hesitant group, 54.6 percent – 100 women -feared side effects or adverse reactions and 20.2 percent – 37 women – said they distrusted the health care system.

Other primary reasons women cited for not wanting the vaccine was that some believed that the vaccine is not for women with breast cancer, 12.6 percent, or their physician has not recommended it to them, 9.8 percent.

The survey also asked what it would take for the women to get the vaccine.

Other potentially effective measure to getting hesitant people vaccinated include providing patients with more information on the vaccines effectiveness (85, 46.4 percent) and safety (78, 42.6 percent).

The least effective measure was the vaccine being endorsed by national health officials, with only three hesitant respondents saying that would convince them to receive the vaccine. 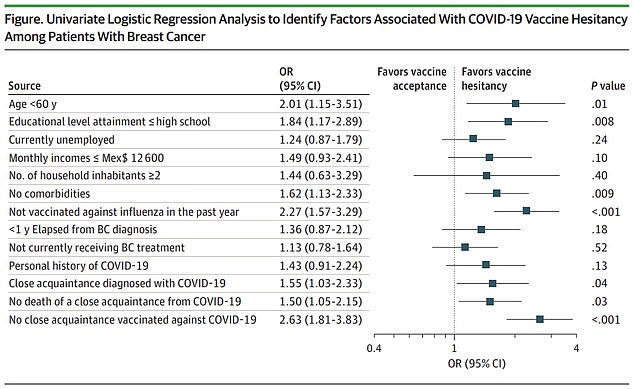 Researchers also found that those hesitant to receive the vaccine were most likely to be younger than 60, have no education past a high school degree, and were unlikely to have received a flu shot in the past year.

While a majority of national figures have endorsed the vaccine and its effectiveness, many of those hesitant about receiving the vaccine are unlikely to be swayed by them.

Instead, many officials have focused on getting primary care physicians and community leaders – people who a hesitant person has a personal, trustworthy, relationship with – to endorse the safety and effectiveness of the vaccine.

The researchers point out oncologists in particular as being key to getting more breast cancer patients vaccinated, since patients are most likely to trust putting their health into them.

Researchers also note that their survey may have some limitations, since they were relying on self reported data from social media, and the sample size of 619 is relatively small.

Cancer patients are at an increased risk of dying of Covid-19, and the best way to protect themselves, according to health experts, is by getting vaccinated.

A recent study found that patients with an active cancer diagnoses are up to 70 percent more likely to die from Covid-19 than the average person.

Cancer patients may be more vulnerable than others even after receiving the vaccine, though, as another recent study found cancer patients were developing lower antibody levels after being vaccinated.

More than HALF of cosmetics likely to contain toxic chemicals that can cause CANCER, study warns

'It's a life or death issue': Trans athletes fight for their humanity while battling anti-trans laws

Swiss unemployment continued to fall in May

0x ZRX/USD can be perceived as this software that allows users to create custom asset markets....