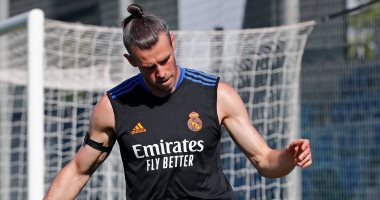 Welsh star Gareth Bale was absent from Real Madrid’s squad to face Celta Vigo due to injury, scheduled for nine in the evening, Sunday, at the “Santiago Bernabeu”, in the fourth round of the Spanish League.

And the Spanish newspaper “AS” revealed that Bale suffered a minor injury to the hamstring level, during the team’s training today, Saturday, at the “Santiago Bernabeu”.

The newspaper added that initial reports indicate that the 32-year-old Welsh star will miss the Inter Milan match next Wednesday in the first round of the Champions League group stage, provided that he is ready to meet Valencia in the fifth round of La Liga.

Gareth Bale returned this season to the royal team, after spending last season on loan to the English club Tottenham, and participated in the first 3 rounds of the League and scored a goal against Levante during the match that ended in a 3-3 draw.

Real Madrid will play tomorrow’s match as it leads the Spanish league standings with 7 points, before the start of the round matches, surpassing only the goal difference from: Valencia, Seville, Barcelona, ​​Atletico Madrid and Real Mallorca, who have the same number of points.