Hand-written maths lessons that Dambusters hero Barnes Wallis used to woo his wife, 17, up for sale

Hand-written maths lessons that Dambusters hero Barnes Wallis used to woo his teenage wife are set to fetch £2,000 at auction.

The man who went on to invent the ‘bouncing bomb’ fell for Molly Bloxham, a cousin half his age, in the 1920s.

But her father felt it was inappropriate for her senior suitor, who was almost 20 years older than the 17-year-old, to be writing to her.

However, he did allow Wallis to correspond with her on condition he instructed her in mathematics that she was studying at college. 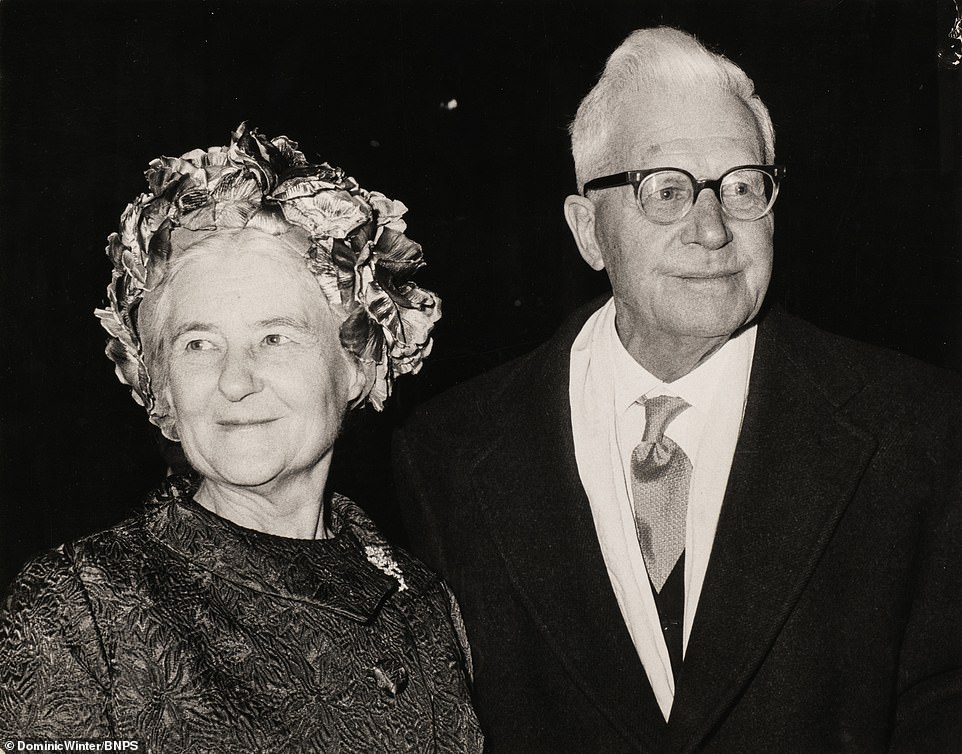 The original maths lesson notes written by Dambusters’ hero Barnes Wallis that he used to woo his teenage wife, pictured together, are to go under the hammer 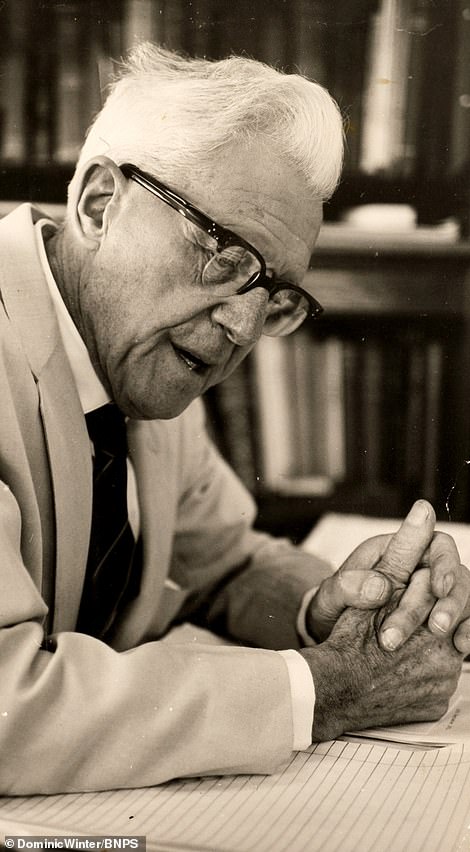 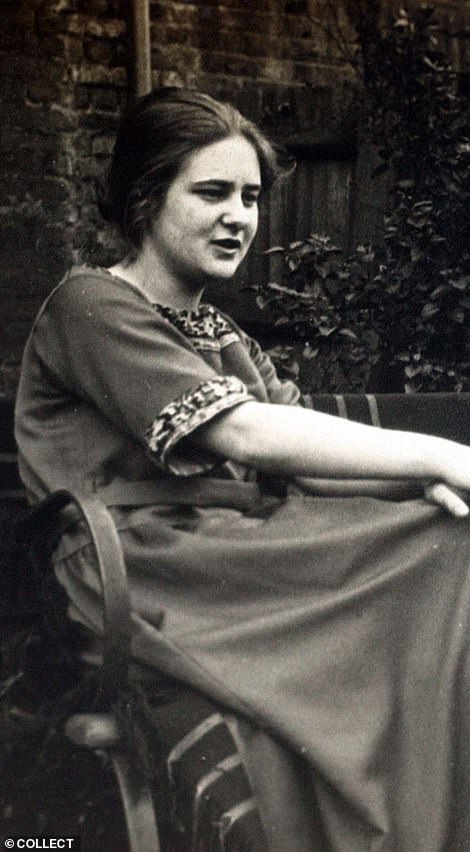 The man who went on to invent the ‘bouncing bomb’, pictured left, fell for much younger cousin Molly Bloxham, pictured right, in the 1920s 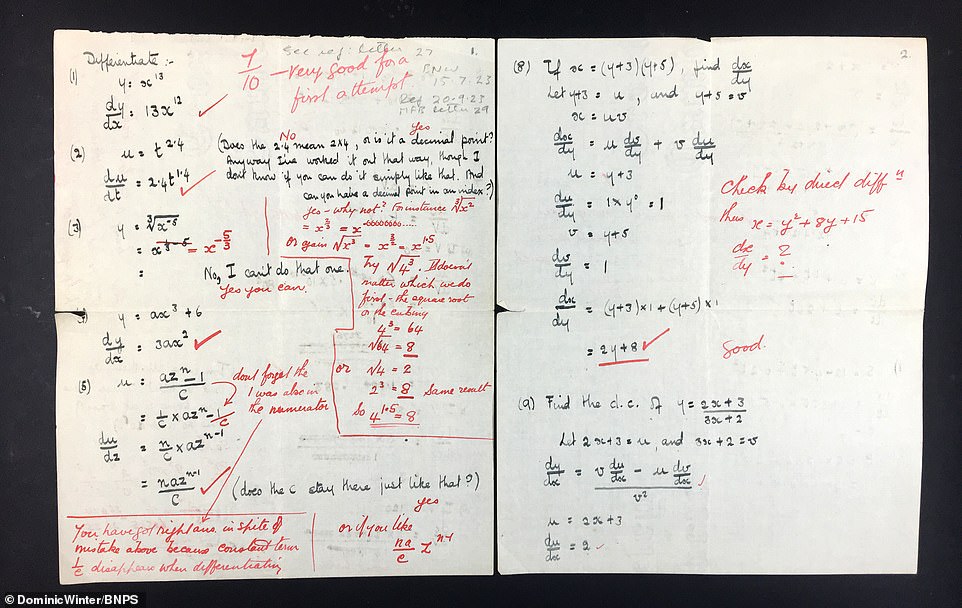 Answers sent from Molly to Wallis in which she says ‘No, I can’t do that one’ to which he replies ‘yes you can’ 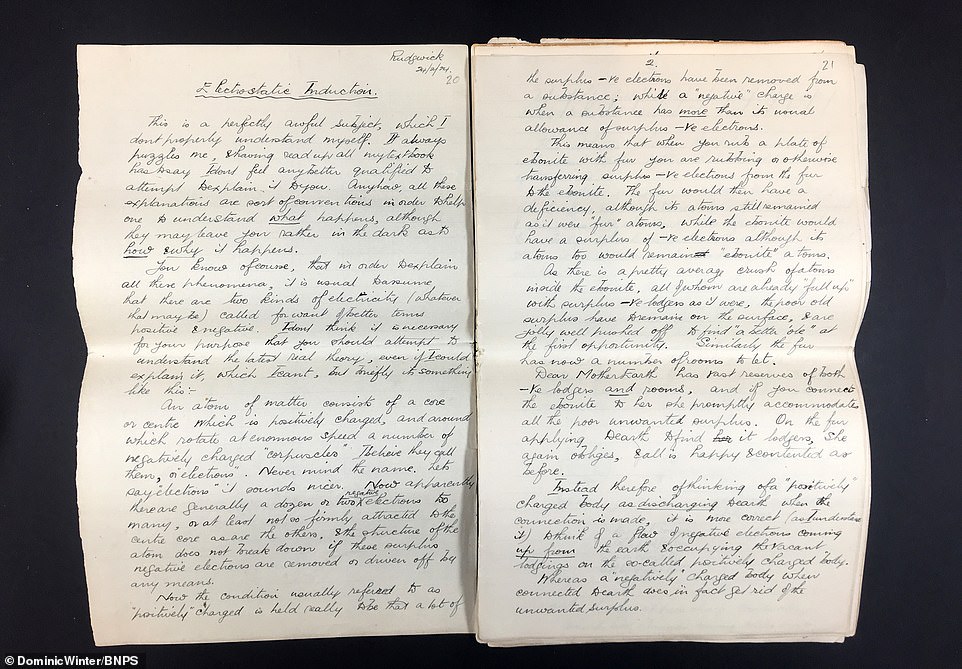 A chapter on Electrostatic Induction sent to Molly on February 24, 1924 with Wallis starting the lecture by stating: ‘This is a perfectly awful subject’ 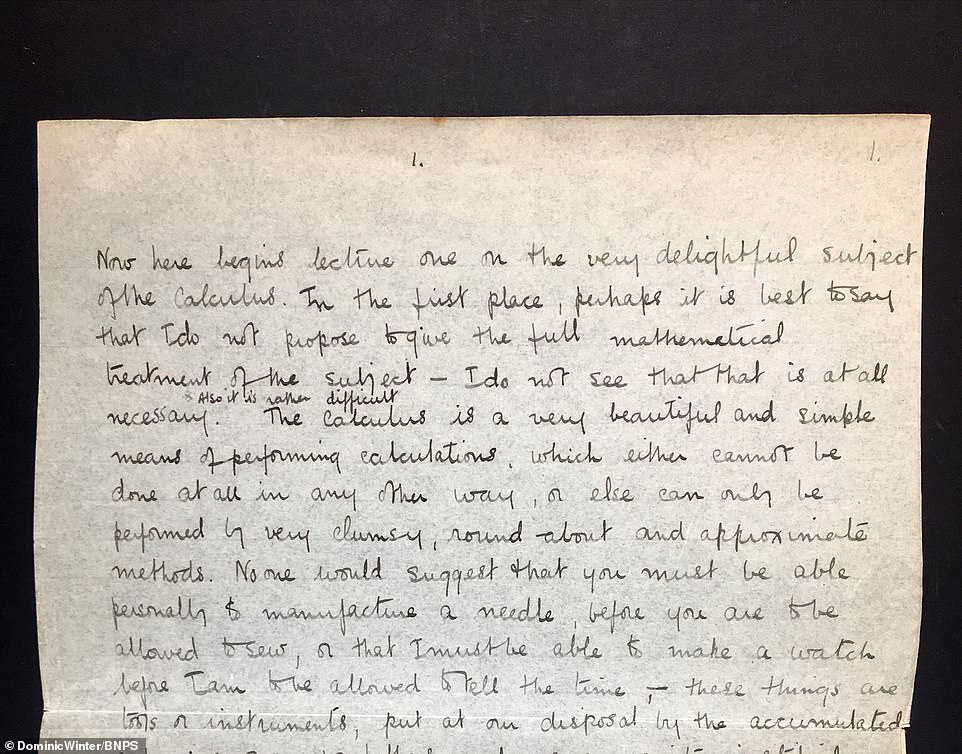 In this note sent to his sweetheart, Wallis writes: ‘Now here begins lecture one on the very delightful subject of the calculus’ 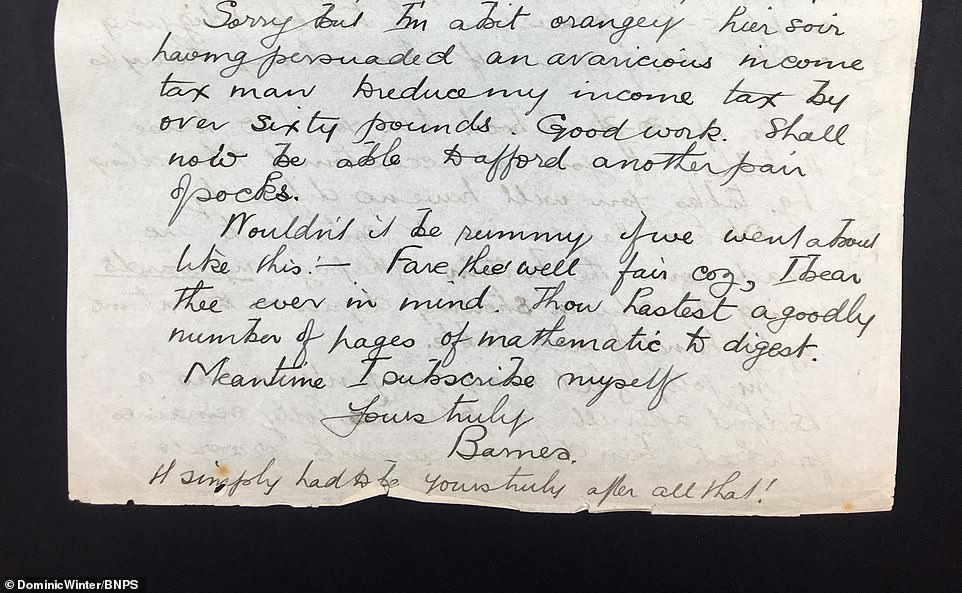 A letter to Molly signed ‘Yours truly, Barnes’ followed by ‘it simply had to be yours truly after all that!’ 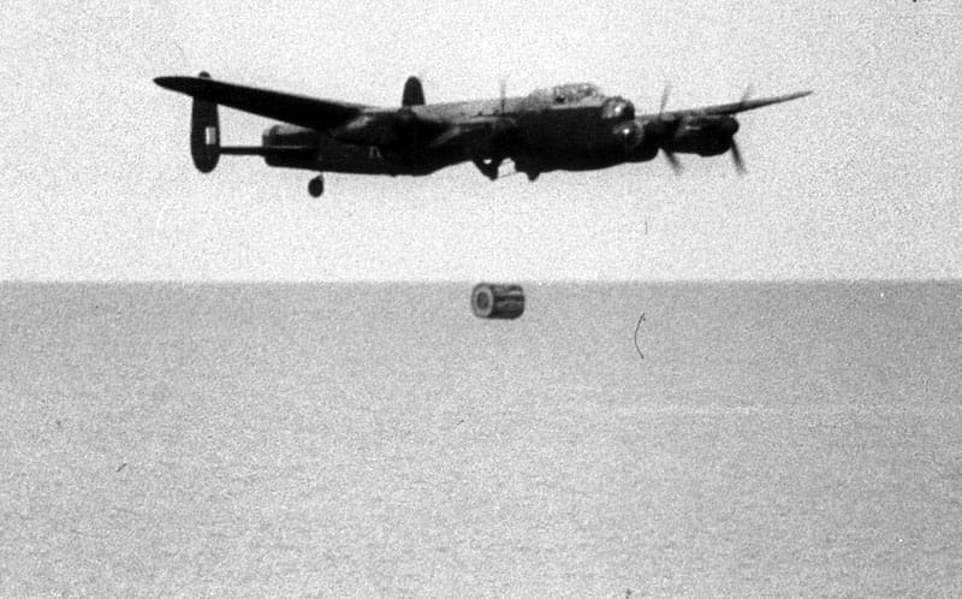 Lancaster Bomber crews in 1943 were armed with Bouncing Bombs, which Wallis invented to be used in the famous Dambusters raid

His letters become more and more personal and intimate, which culminated in the scientist winning Molly’s heart.

The couple married three years later and went on to have four children together.

Wallis became a hero of World War Two after he invented the bouncing bomb that was used in the famous Dambusters raid of 1943.

The cache of the handwritten letters were discovered in a dusty box decades later by their daughter Mary who, in 2005, turned them into the book ‘Mathematics With Love’.

Mary died last year and now the letters teaching maths will be sold at Dominic Winter auction house near Cirencester, Gloucs, with an estimate of £2,000.

Chris Albury, from the saleroom, said: ‘This is a wonderful archive from the family that records the period when Barnes Wallis and Molly were wooing.

‘Her father, perhaps understandably, was cautious about the blossoming romance.

‘He allowed the correspondence as long as it was about maths, and the archive also includes some of Molly’s answers and Wallis’ corrections.

‘There are 248 pages in Wallis’ hand and they also include chapters on ‘potential charge and capacity’ and ‘electrostatic induction’.

‘Within the envelopes were more personal letters, but these are not part of the sale.

‘However, the letters about maths appear to have worked because Molly passed out of University College London and the pair were married in 1925. 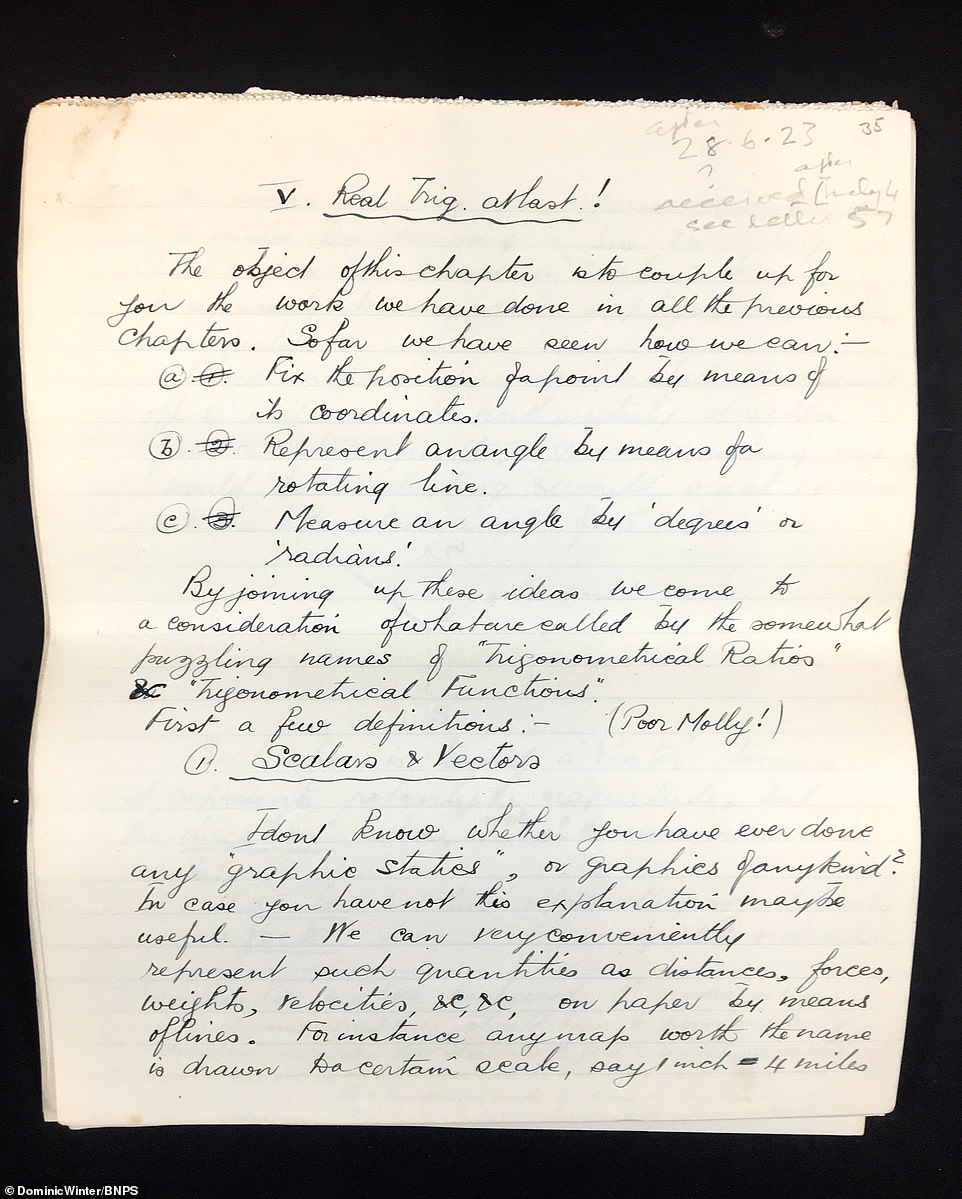 Also included in the collection, which goes on sale tomorrow, is a chapter written by Wallis with the title ‘Real Trig at last!’ 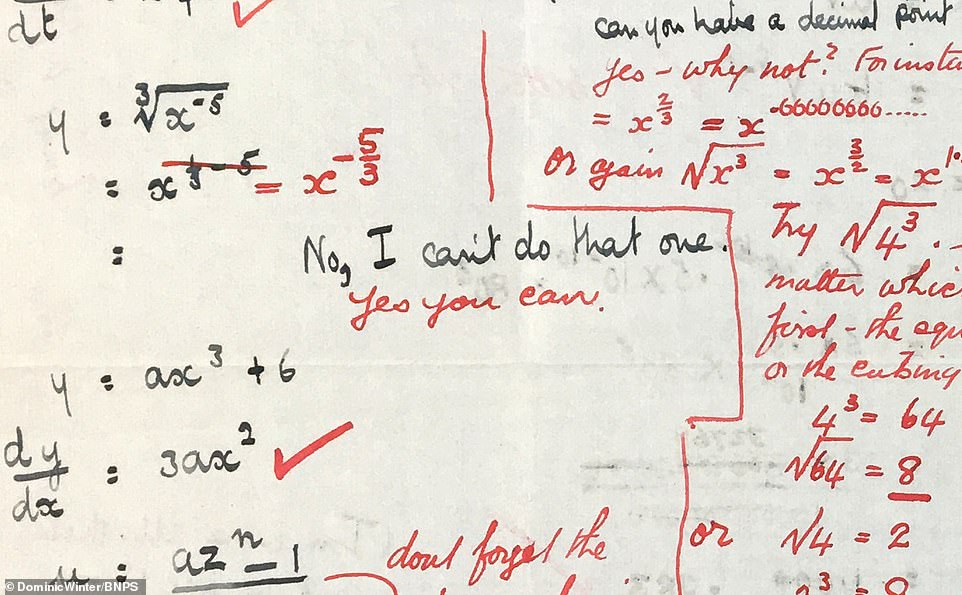 A close up of one of the letters, shows Molly having written ‘no, I can’t do that one’, to which Wallis replies ‘yes you can’ 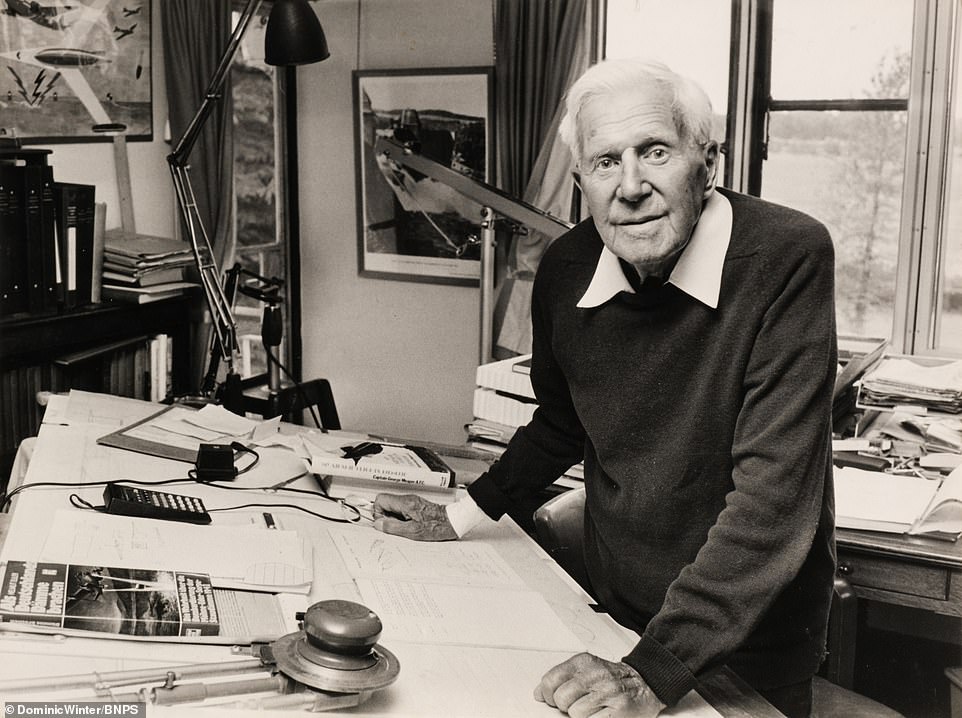 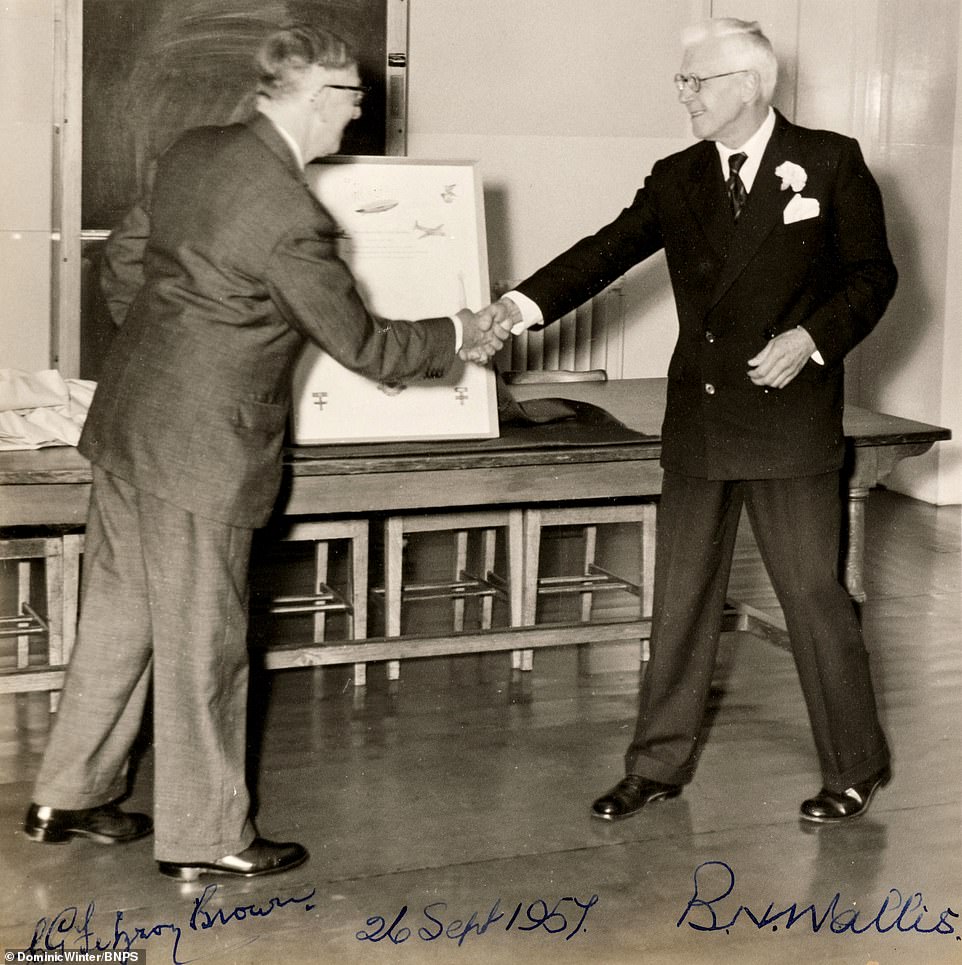 Barnes Wallis, right, pictured in 1957, was allowed to correspond with Molly Bloxham, whose father felt it was inappropriate for her senior suitor to be writing to her, on condition he instructed her in mathematics that she was studying at college 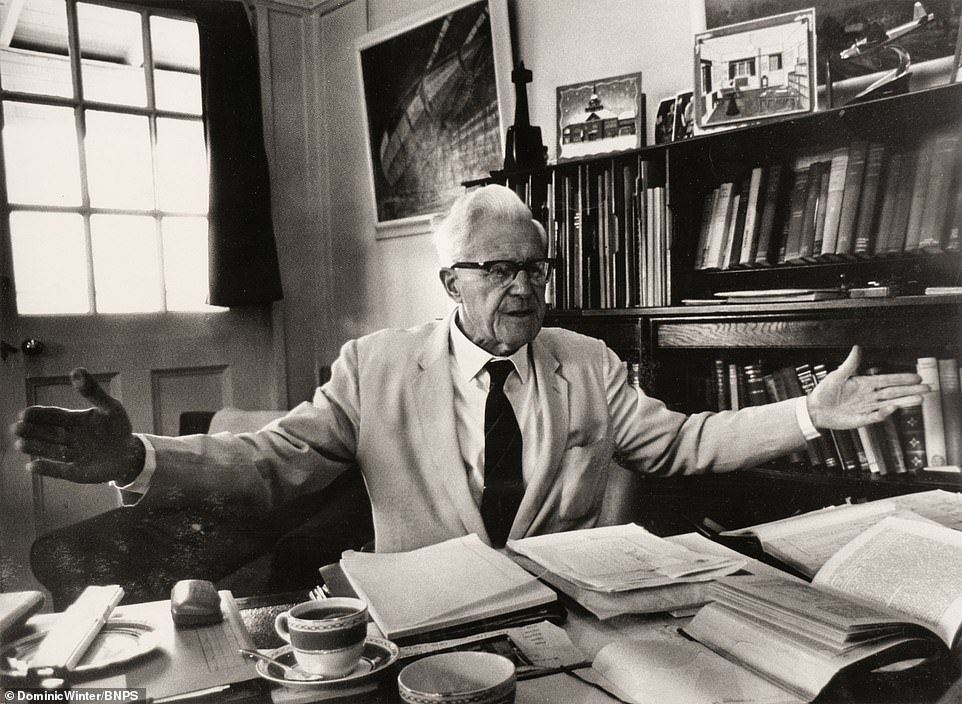 His letters become more and more personal and intimate, which culminated in the scientist winning Molly’s heart 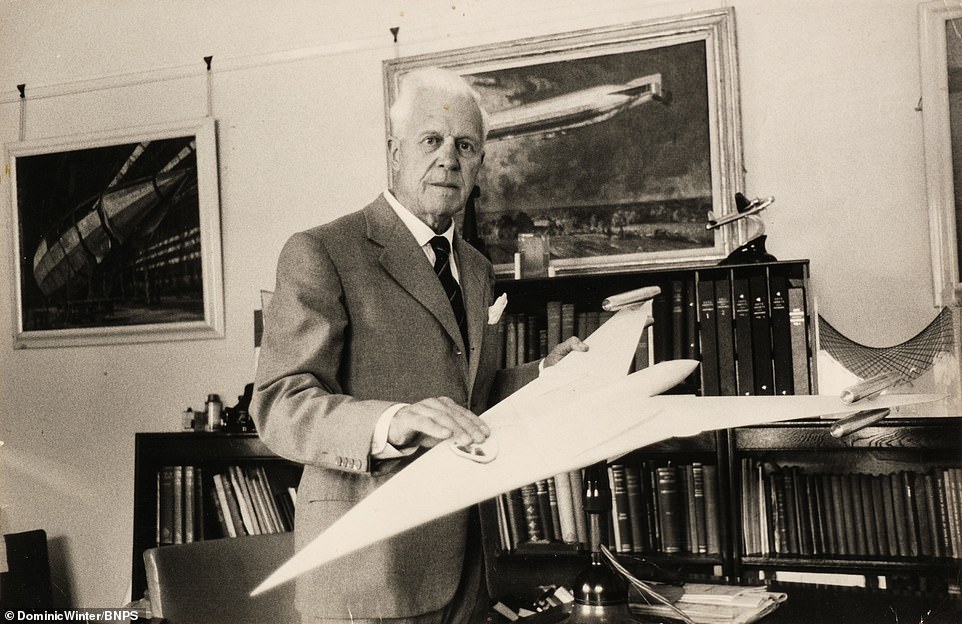 ‘The union lasted for 54 years until Wallis’ death in 1979 and they had four children and also adopted Molly’s sister’s children after their parents were killed in a world war two air raid.

‘It was their eldest adopted daughter Mary who published the letters as a maths text book in 2005.

‘It is a remarkable series of bespoke lessons devised by Wallis for Molly and written as part of their courtship.

‘Over 16 months he sent a chapter every fortnight; perhaps no one has ever looked forward to receiving their maths lessons more than Molly did.

‘There is likely to be much interest in these letters from collectors, historians, mathematicians and institutions.’

Wallis met Molly at a family tea party in 1922.

But he then moved to Chillon, Switzerland, where he taught at a young gentleman’s academy.

This meant having to write to Molly whose father decided the correspondence weren’t formal enough.

Mary went on to pass her course in advanced mathematics at the University College London.

Wallis might have been a great teacher had he not gone back to work British aircraft manufacturers Vickers.

In the 1930s he designed the R100 airship and when World War Two began he put his expertise into designing bombs.

His work on the bouncing bomb, which he developed after firing marbles across water tanks in his garden, turned him into a celebrity.

Following the war he continued to carry out research and design, which included supersonic aerodynamics that contributed to the design of Concorde.

The Dambusters: How bouncing bombs – and incredible flying by RAF pilots – flooded the Ruhr valley and delivered a crucial blow to the Nazi war machine

On May 16, 1943, 19 Lancaster bomber crews gathered at a remote RAF station in Lincolnshire for a mission of extraordinary daring – a night-time raid on three heavily defended dams deep in Germany’s industrial heartland.

The dams were heavily fortified and needed the innovative bomb – which bounced on the water over torpedo nets and sank before detonating.

To succeed, the raiders would have to fly across occupied Europe under heavy fire and then drop their bombs with awesome precision from a mere 60ft above the water. 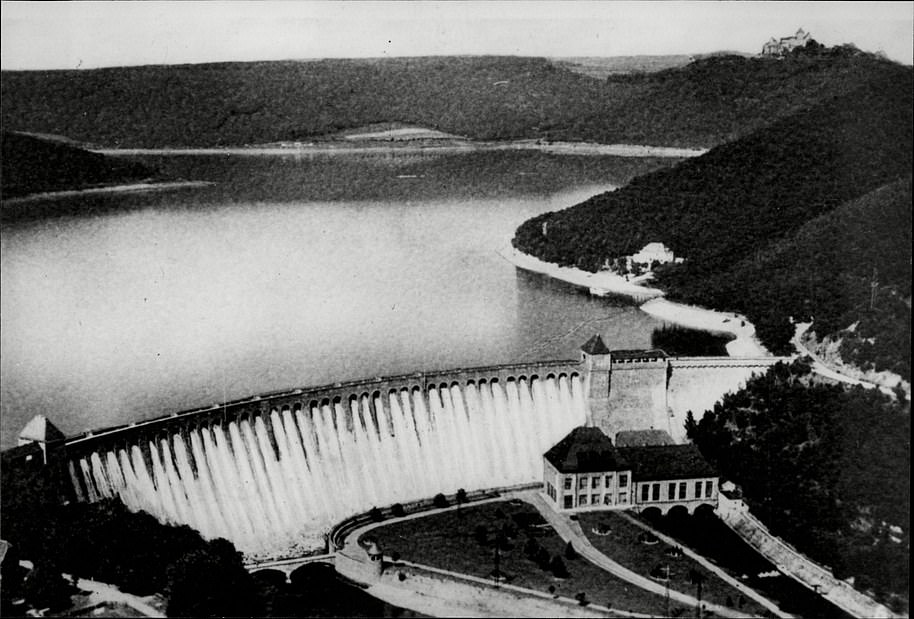 The Eder Dam, pictured, was destroyed as part of Operation Chastise on the early hours of the morning on May 17, 1943, causing significant damage to factories and mines

The Mohne and Eder Dams in the industrial heart of Germany were attacked and breached by mines dropped from specially modified Lancasters of No. 617 Squadron.

The Sorpe dam was was also attacked by by two aircraft and damaged.

A fourth dam, the Ennepe was reported as being attacked by a single aircraft (O-Orange), but with no damage. 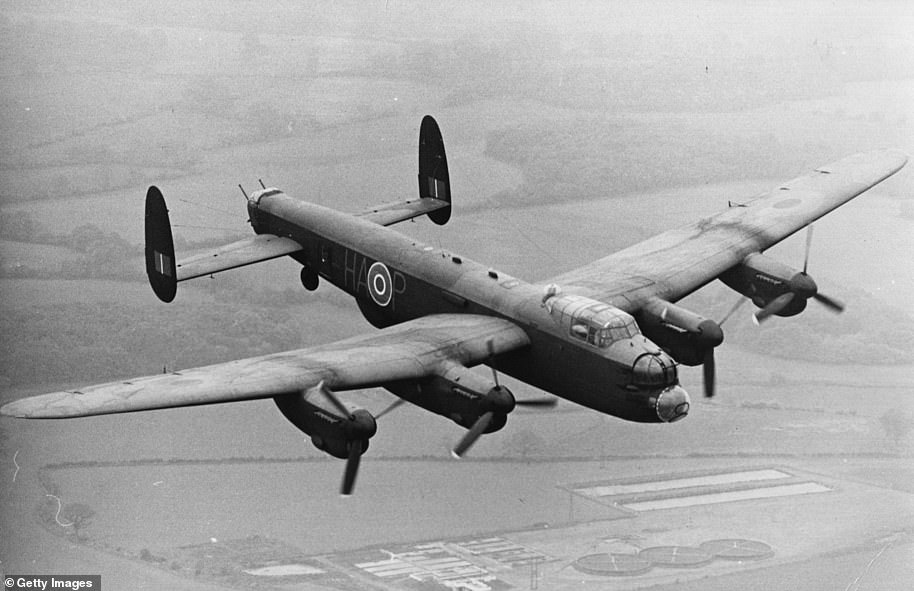 19 Lancaster Bomber crews armed with Bouncing Bombs set off to attack several dams in Germany on May 16, 1943 as part of Operation Chastise during the Second World War

Up to 1,600 people were estimated to have been killed by floodwaters and eight of the 19 aircraft dispatched failed to return with the loss of 53 aircrew and 3 taken prisoner of war.

Wg Cdr Guy Gibson, Officer Commanding No. 617 Sqn, was awarded the VC for his part in leading the attack.

The raid, orchestrated by Guy Gibson and the RAF’s 617 ‘Dambuster’ Squadron, was seen as a major victory for the British, and Wing Commander Gibson is recognised as one of the war’s most revered heroes.

Their success was immortalised in the classic 1955 film The Dambusters, its thrilling theme tune and gung-ho script evoking the best of British derring-do. 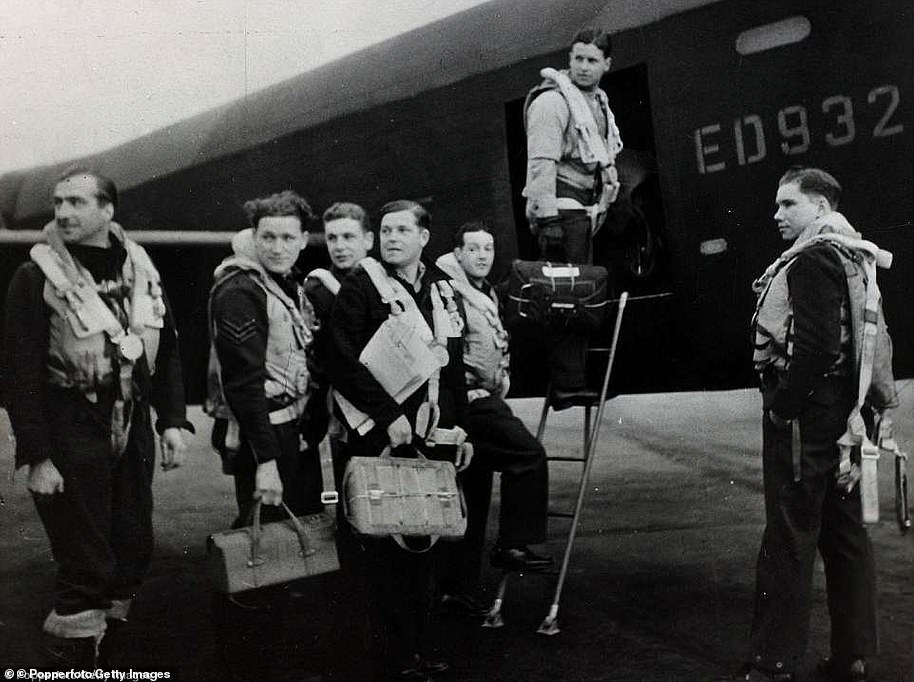 British Prime Minister: We are witnessing an alarming increase in Corona injuries in the country