The Government’s plan to allow hands-free motoring on Britain’s motorways as early as spring next year have been criticised following a safety review of the technology being proposed.

Ministers are due to close a consultation next week that could legalise the use of Automated Lane Keeping Systems (ALKS) that allow drivers to take their hands off the wheel to watch television or read a newspaper while the car takes responsibility for the journey.

Vehicle safety experts Thatcham Research say the plans are ‘undercooked’ and the capabilities of the technology is misleading for drivers.

Matthew Avery, research director, said: ‘The Government’s proposed timeline for the introduction of automated technology must be revised. It simply isn’t safe enough and its introduction will put UK motorists’ lives at risk.’ 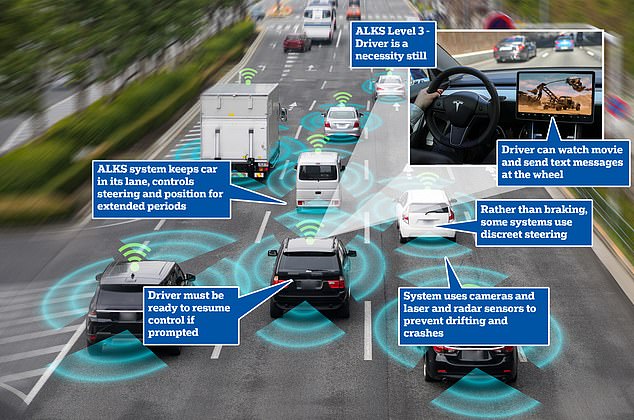 ‘Undercooked and unsafe’: Vehicle safety experts and insurers have urged the Government to reconsider plans to allow cars with Automatic Lane Keeping Systems to be used on British motorways from spring 2021

German manufacturers like Mercedes-Benz and US electric car maker Tesla have been at the forefront of developing sophisticated automated driving features that they insist can be used safely.

This week, Elon Musk confirmed the release of a ‘beta’ version of Tesla’s Full-Self Driving (FSD) system, which will be trialed by a select group of customers before a $2,000 (£1,500) update is released to more owners from next month.

However, the beta version comes with a raft of safety precautions and caveats that have brought into dispute the true capabilities the system.

Instructions given to Tesla’s guineapig customers warn that it ‘must be used with additional caution’ and ‘may do the wrong thing at the worst time, so you must always keep your hands on the wheel and pay extra attention to the road’.

Thatcham Research, an automotive safety and security test lab that’s funded by insurers but operates independently, said the technology under consultation in Britain is not yet fit for purpose and threatens the safety of road users.

An assessment of ALKS found they can fail to see debris on the road, avoid pedestrians or recognise when a motorway lane is closed.

Thatcham Research pinpointed several scenarios in which ALKS will not respond in the same way as a competent driver on a UK motorway:

– Debris in the carriageway

Debris caused 11 serious accidents on UK motorways in 2019. Automated Lane Keeping System technology may not see this type of hazard and will continue in lane at its set speed, potentially causing a serious collision. An attentive driver, however, should recognise debris and attempt to move around it by safely changing lanes. 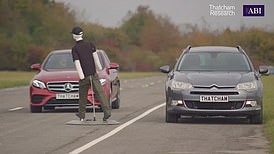 Pedestrian casualties are increasing on UK motorways and accounted for 23% of Killed and Seriously Injured (KSI) on those roads in 2019. If a pedestrian encroaches on the carriageway while emerging from a broken-down vehicle, a human driver would either slow to a safe speed or move out of lane to avoid conflict. An Automated Lane Keeping System won’t be allowed to do this because it’s forced to stay in lane and so will continue at motorway speed towards the pedestrian, significantly reducing the ability to brake and avoid a collision.

There were 70 accidents caused by cars driving along a closed lane – marked with a red ‘X’ – on smart motorways in 2019. Automated Lane Keeping Systems may not recognise a closed lane and break the law. If the vehicle does recognise the closed lane, it can only stop in lane under the red ‘X’, creating an additional hazard.

‘Motorists could feasibly watch television in their car from early next year because they believe their Automated Lane Keeping System can be completely trusted to do the job of a human driver.

‘But that’s not the reality. The limitations of the technology mean it should be classified as ‘Assisted Driving’ because the driver must be engaged, ready to take over.’

He added: ‘There are liability and legal challenges with ALKS, as well as safety challenges about your vehicle not being able to do what an engaged human driver can do.

‘The technology just isn’t there yet, regardless of what the manufacturers say.’

US researchers have raised similar concerns.

The problem for the insurance industry is that if a driver is not in charge of a vehicle, they would be classed as a passenger, which would create additional liability for insurers and could lead to higher premiums.

Avery said that within around five years self-driving systems will be able to handle motorway driving, but calling today’s systems ‘automated’ is misleading for drivers as it should be ‘assisted driving’. He referred to accidents drivers have had using Tesla’s ‘Autopilot’ system.

‘We’ve seen people doing stupid stuff with Teslas, getting in the back of the car when they feel it’s automated when its clearly not,’ Avery said.

James Dalton director of the Association of British Insurers said the industry is 100 per cent committed to supporting the development of automated vehicles that could potentially improve road safety and revolutionise our transport systems.

However, he warned drivers ‘must not be given unrealistic expectations about a system’s capability’.

He added: ‘Thatcham Research has identified some concerning scenarios where ALKS may not operate safely without the driver intervening.

‘We strongly believe the timings for the introduction of ALKS should be revised to prevent lives being put at risk.’

When activated, an Automated Lane Keeping System keeps the vehicle within its lane, controlling its movements for extended periods of time without the driver needing to do anything 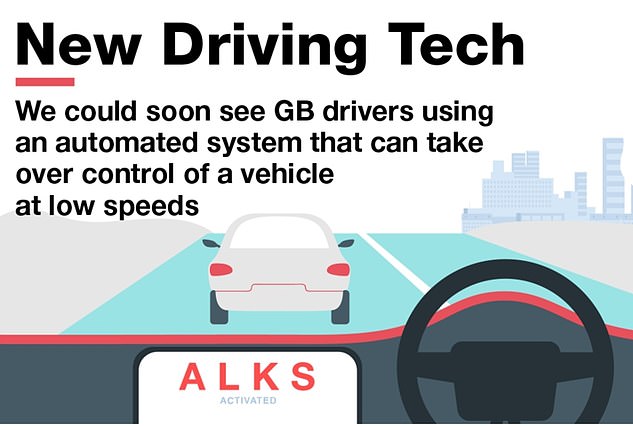 ‘ALKS need a quantum leap in development to be safe’

Thatcham Research and the ABI said they both ‘passionately believe’ in the safe adoption of automated driving technology because it will ultimately reduce accidents in the future.

However, they said the tech in its current form is simply not fit for purpose and marketing systems as ‘self driving’ – which Tesla is currently doing – is misleading.

‘Current technology requires an attentive driver to be engaged so they can re-take control of the vehicle when required. Automated Lane Keeping System technology would need a quantum leap in development to be able to cope with these very real scenarios safely,’ Avery said.

‘With today’s radar sensors only able to monitor a relatively short distance up the carriageway and Automated Lane Keeping System-equipped cars bound by legislation that will not allow them to change lane autonomously, it’s crucial that sensor performance moves on dramatically before a system can be classified as ‘automated’.’

The sensors contained within today’s Assisted Driving technology can only interpret up to around 120 metres. At motorway speeds, that distance allows only four seconds to take back control and avoid an incident. 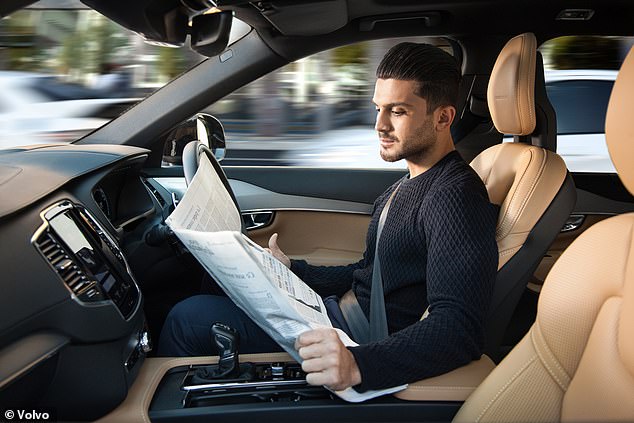 Automated Lane Keeping Systems will be able to take over driving on motorways, suggesting it will allow users to do other things, such as watch a movie on their phone or read the newspaper 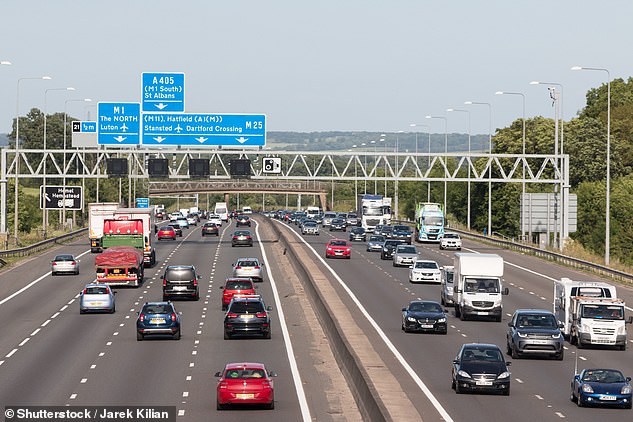 To support the development of suitable technology, both bodies published a ‘Defining Safe Automated Driving’ document in 2019 that clearly outlines the 12 key principles that must be met to ensure a safe transition towards an Automated Driving future for all road users.

Avery said: ‘Our conclusion is Automated Lane Keeping System technology is not safe enough to be classified as automated. We believe it should be regarded as assisted technology because the driver needs to remain alert.’

Thatcham Research and the ABI will make a joint submission to the Government’s Automated Lane Keeping System consultation before it closes on 27 October to formally present their concerns around safety and liability.

What is ALKS and how does it work?

Automated Lane Keeping System (ALKS) technology would be the most advanced car automation so far seen on UK roads.

When activated, the ALKS keeps the vehicle within its lane, controlling its movements for extended periods of time without the driver needing to do anything.

However, the driver must be ready and able to resume driving control within seconds if prompted by the vehicle.

Different manufacturers all have their own systems, but generally it involves  a forward-looking camera, usually behind the windshield, laser sensors, infrared sensors and radar sensors to detect if you’re unintentionally drifting out of lane.

When the sensors detect the car is moving out of lane, it can automatically apply braking to one side of the vehicle to correct the vehicles position in the road.

Rather than subtle braking, some systems can use discreet steering interventions.

ALKS is designated a Level 3 system by the UN’s Economic Commission for Europe.

This signifies that the person at the wheel is not driving when the automated systems are engaged, but can step in at any time and must take over at the system’s request.

With a Level 3 system activated, the user is allowed to do other things, such as watch a movie or even send a text message, but must retain some level of alertness to what is happening around them.

There are five stages of autonomy for self-driving cars, with Level 5 being full autonomy.

While it is similar to the technology already being used by Tesla, which it calls Autopilot, the US firm’s system is only deemed Level 2 – where drivers are expected to keep their full attention on traffic.

Lane Keeping Assist – a function that’s been available in new cars for over a decade – is also deemed to fall into Level 1 and 2 because it only alerts the driver that they are veering out of their lane and it is up to the user to steer the vehicle. 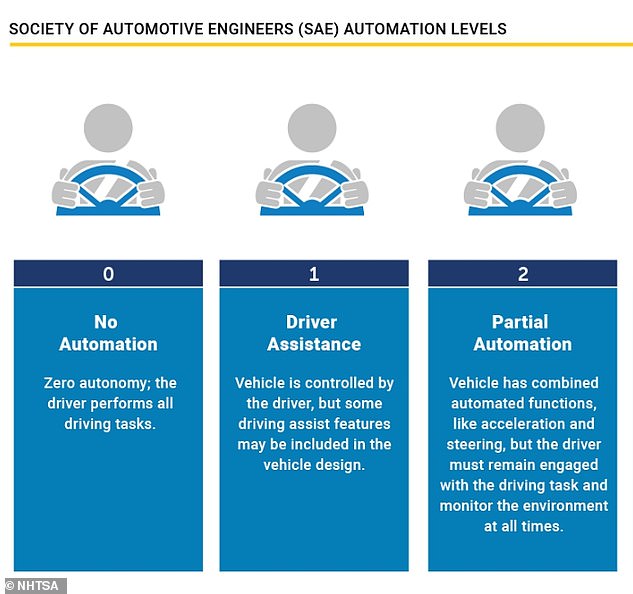 Currently, the highest level of vehicle autonomy being used on UK roads is Tesla’s Autopilot, which is classified as Level 2 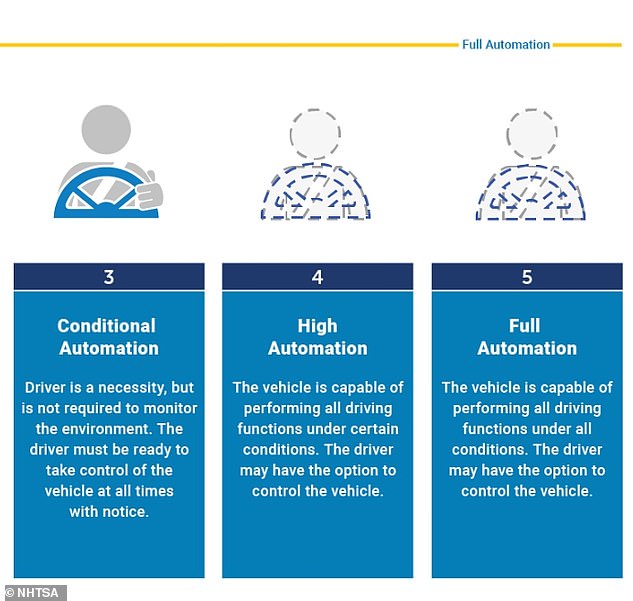 If given the green light, Automated Lane Keep Systems will be the first instance of Level 3 vehicle autonomy in the UK