Wasps’ sting came at the tail as they came from 12 points down to beat 14-man Harlequins, to take them one win from the playoffs.

Three late tries, after Quins had hooker Elia Elia sent off, from Gabriel Oghre, Thomas Young and Jack Willis meant Wasps took not only the win but a crucial bonus point.

They had trailed 20-8 after two scores from Alex Dombrandt and 13 points from Marcus Smith – including a try-of-the-season contender – had Quins well up. 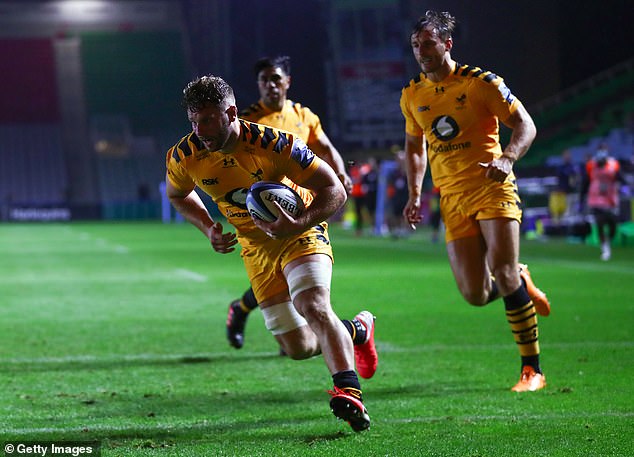 But the Londoners crumbled late on in captain Chris Robshaw’s final match at The Stoop.

When Mike Brown was charged down by Jack Willis with six minutes left the flanker scored to put Wasps ahead for the first time since his brother Tom’s early score.

Wasps now move to second, with Exeter to come on Sunday, meaning the pressure is on Sale and Bristol in the semi-final race. They face Northampton and Leicester on Tuesday and Wednesday respectively.

‘The red card had a fair say on the game!’ said Wasps boss Lee Blackett.

‘It was a fair call. Whether we would have won without it or not you don’t know, but we still had to get the result.

‘It’s the confidence of the group to come back. Did we play well, no? But it’s coming to the business end, so it’s about results now.’ And after the Willis brothers helped seal the victory the director of rugby added: ‘There’s plenty of Wasps fans talking about putting a statue of Willis’ mother at the Ricoh – I’ll help build it!’

Harlequins looked well set just after half-time. ‘Dominator’ Dombrandt had lived up to his nickname with two tries after replacing injured James Chisholm in the first half, and Smith had kicked a penalty, conversion and scored a wonderful try catching his own chip and running it in past Jacob Umaga. 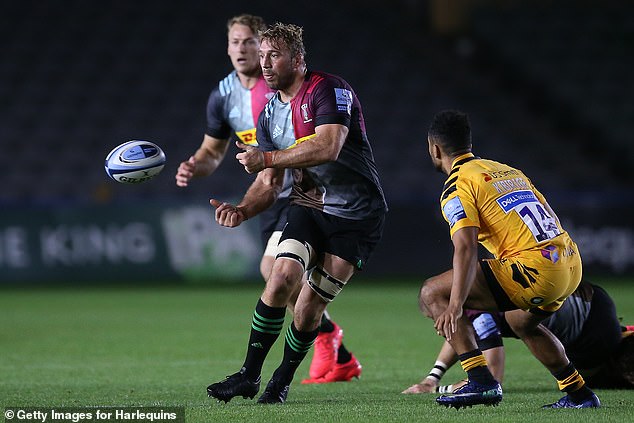 However, they then imploded. Elia was sent off with 26 minutes left for a tip-tackle on Dan Robson, and immediately Wasps scored through Gabriel Oghre.

Gopperth converted but when Smith hit a penalty Quins thought they would still triumph.

However Wasps rallied knowing defeat would deal a hammer-blow to their chances of making the semi-finals.

First Young, then Jack Willis went in and Gopperth kicked a final penalty to seal it, leaving his tally on 12 and Wasps buzzing up the table.

A distraught Robshaw said: ‘In sport we don’t always get the fairy tales we dream about.’

Premiership clubs may be without their England stars for 11 of the first 14 rounds of the new season, when fixtures for the 2020-21 season are announced today.

Internationals could play just three Premiership club games between November and next March as the first three rounds clash with the new Autumn Nations Cup, and rounds seven to 14 are set to overlap with next year’s Six Nations.

The new season will start with Harlequins facing Exeter Chiefs at the Stoop and Sale v Northampton at the AJ Bell on Friday 20, November.

Trump hints that PFIZER’s coronavirus vaccine could be first approved