Prince Harry and Meghan Markle have given their Archewell website a makeover after officially splitting from the royal family.

In December last year the Duke, 36, and Duchess of Sussex, 39, who are currently living in their $14 million Californian mansion, launched the site of their non-profit organisation, in which they vowed to ‘unleash the power of compassion’ and Harry described himself as his ‘mother’s son’.

The couple originally shared two images on the homepage, one of Harry as a boy with Diana, taken at Highgrove in July 1986, and one of Meghan as a girl with her mother, Doria Ragland.

Now, the couple have replaced the emotive statement with a snappier paragraph declaring how they ‘drive systemic cultural change’ through ‘one act of compassion at a time’, and used an image of the pair helping distribute school supplies in LA.

The changes comes after the couple were told they could not continue with ‘the responsibilities and duties that come with a life of public service’ and were stripped of their remaining patronages following their move to the US.

The Sussexes have updated their Archewell website, swapping an image of Prince Harry’s late mother with a picture of the couple volunteering in California (pictured now) 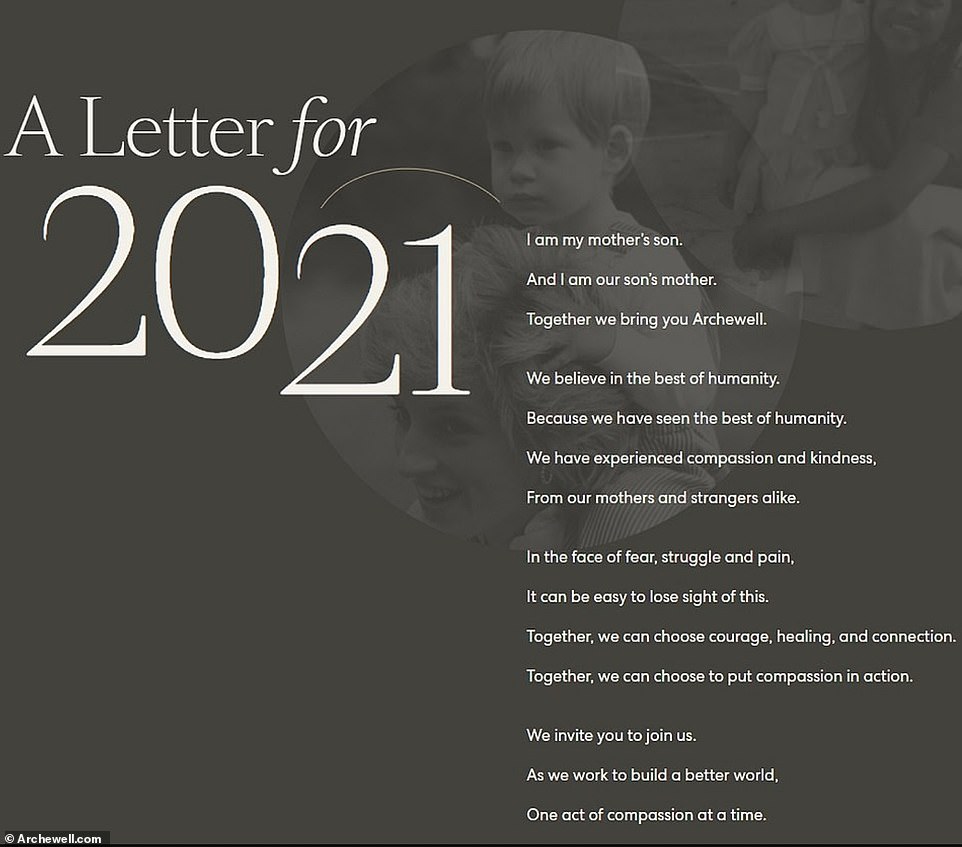 In December last year the pair launched the website of their non-profit organisation, in which they vowed to ‘unleash the power of compassion’ and Harry described himself as his ‘mother’s son’ (pictured in December)

The Duke and Duchess were stripped of their royal and sporting patronages by the Queen last week, and announced they are expecting their second child on Valentine’s Day.

In a joint statement on the newly-updated website, the pair wrote: ‘Welcome to Archewell. Through our non-profit work, as well as creative activations, we drive systemic cultural change across all communities, one act of compassion at a time.’

The move may be welcome news to Prince William, who royal sources claimed last year was concerned that his brother Harry ‘appeared to be exploiting his mother’s iconic status’.

The couple’s original Archewell site featured an emotive letter about Prince Harry, Meghan and their relationship with their mothers. 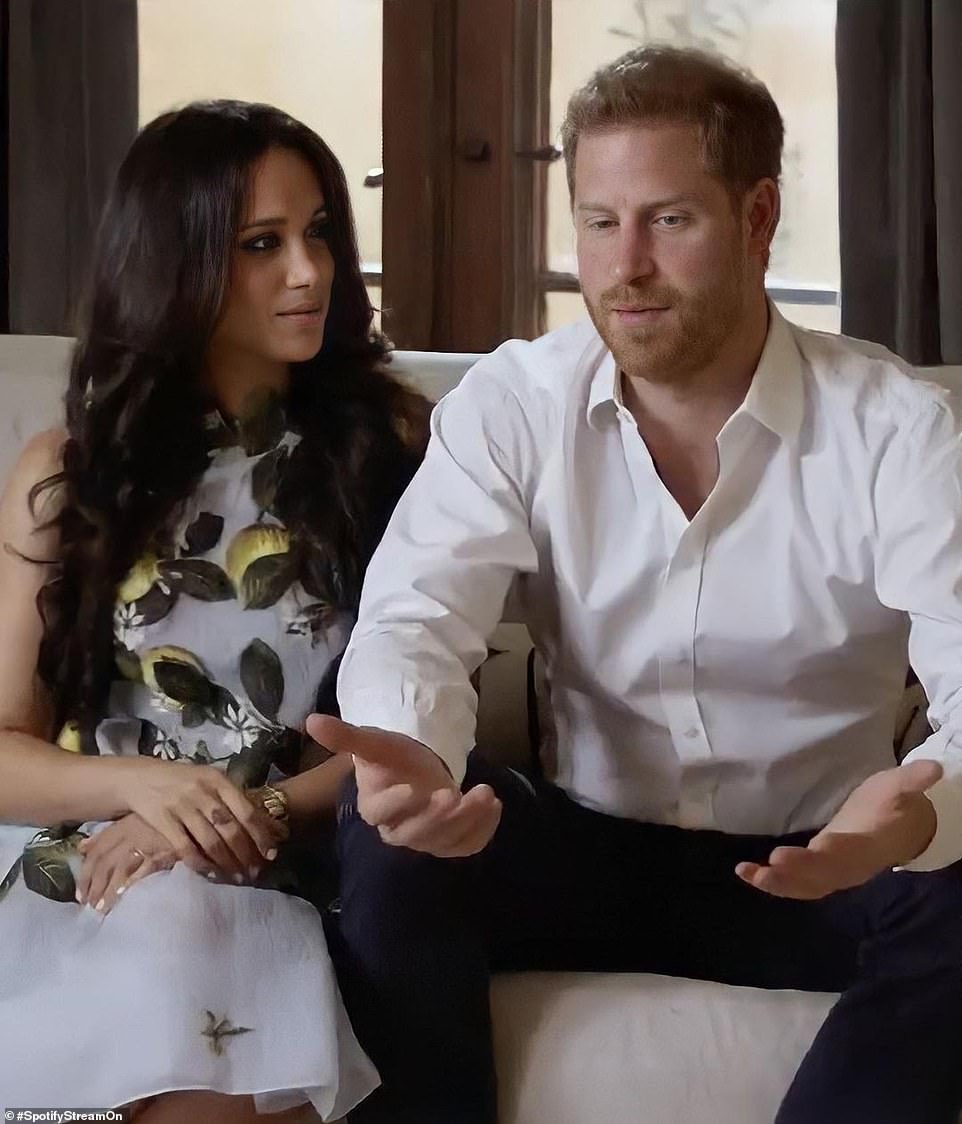 The site still plugs the couple’s commercial ventures – Archewell Audio, the brand they have chosen for their £30m podcasting deal with Spotify. Pictured, Prince Harry and Meghan Markle in their California home 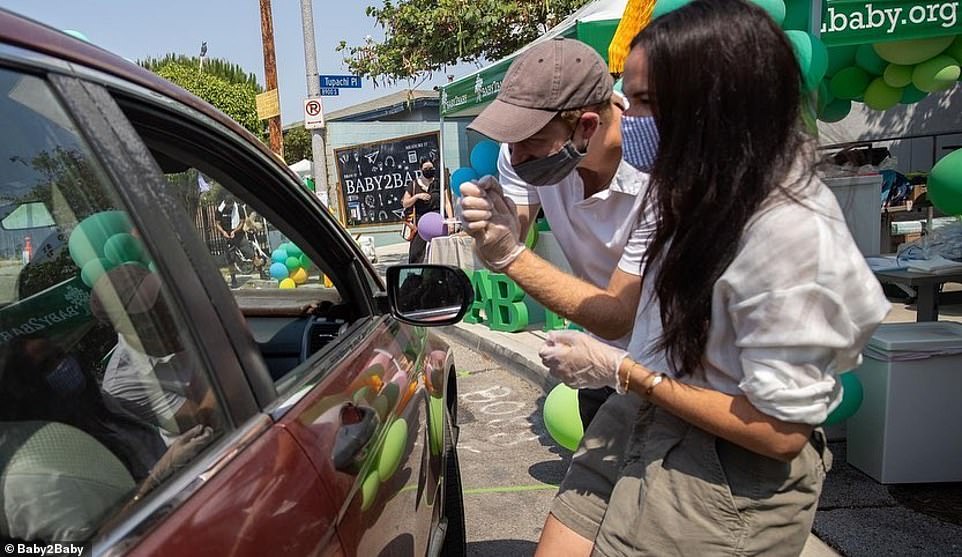 Pictured, Harry and Meghan handing out school supplies, clothing and nappies to families in need at a drive-thru event in Los Angeles last year

It  made no reference to Harry’s father Prince Charles or to his brother William – and royal expert Phil Dampier said this would not have gone unnoticed by the family.

He told MailOnline at the time: ‘I think William will be slightly worried if Harry uses Diana for any of his charitable or commercial ventures without consulting him, and I don’t think he would be happy if Harry appears to be exploiting his mother’s iconic status.

‘It’s also very significant that Harry called himself his ‘mother’s son’ but has made no mention of Prince Charles. William is very much following now in his father’s footsteps with his environmental and conservation work.’

The site still plugs the couple’s commercial ventures – Archewell Audio, the brand they have chosen for their £30m podcasting deal with Spotify, and Archewell Productions, their chosen name for their Netflix production tie-up said to be worth as much as £100m.

Since stepping down as senior royals in March and moving to the US, the couple have been working towards this moment to officially launch, albeit softly, the website and the philosophy behind their organisation Archewell.

Their decision to leave was based as much about financial as personal freedom and the huge sums gives them the capital to pursue their new lifestyle and public goals.

The couple announced they had secured a deal with Spotify last year. It was commercial deals such as this that put the couple at odds with the impartiality required of those in public service and seemingly led to the permanent split with the Firm.

The Duchess of Sussex, 39, appeared alongside the Duke, 36, in a 20-second video to plug their Archewell Audio podcast at a Spotify live stream event broadcast earlier this week

Archewell is expected to focus on the issues the couple have been championing during the pandemic and before – racial justice, gender equity, climate change, mental health, online hate speech and empowering diverse voices.

The foundation’s partnership with a range of academic and tech organisations will include financial support.

I am my mother’s son.

And I am our son’s mother.

Together we bring you Archewell.

We believe in the best of humanity.

Because we have seen the best of humanity.

We have experienced compassion and kindness, From our mothers and strangers alike.

In the face of fear, struggle and pain, It can be easy to lose sight of this.

Together, we can choose courage, healing, and connection.

Together, we can choose to put compassion in action.

We invite you to join us.

As we work to build a better world, One act of compassion at a time.

Welcome to Archewell. Through our non-profit work, as well as creative activations, we drive systemic cultural change across all communities, one act of compassion at a time.

Marketing executives have predicted Archewell will become a ‘billion-dollar brand’.

The change comes days after they appeared in a 20-second video to plug their Archewell Audio podcast at a Spotify live stream event broadcast earlier this week.

In the brief appearance, Meghan, gushed that they are ‘using podcasting to drive powerful conversations’, before Harry chimed in ‘that inspire, challenge and educate’.

‘We created Archwell audio to make sure we can elevate voices that maybe aren’t being heard and hear people’s stories,’ Meghan, who was wearing a £2,645 Oscar de la Renta dress, said.

The Sussexes were last week told they could not continue with ‘the responsibilities and duties that come with a life of public service’ and were stripped of their remaining patronages following their move to the US.

Minutes after Buckingham Palace released its statement confirming Meghan and Harry were no-longer working royals, the couple hit back saying they would still ‘live a life of service’ in a ‘barbed’ statement dubbed ‘horribly disrespectful’ to the elderly Queen.

Their definitive split from life as working royals followed a telephone conversation between Harry and his grandmother – which saw the 94-year-old monarch tell her grandson she ‘was delighted he has found happiness’ and ‘only wants the best for him and his family’.

But Harry stressed he is aware of his ‘duty to the family’ – and has promised ‘never do anything to embarrass them’.

Palace insiders earlier revealed that it was Harry who pushed to restart talks over his and Meghan’s position early this year.

And Prince Harry’s ‘unhelpful’ appearance on the Late Late Show today is said to have caused ‘disquiet’ – following an already-tense seven days in Sussex-palace relations.

The Duke claimed that he and Meghan ‘never walked away’ from the royal family and he did ‘what any husband or father would do’ by emigrating to Los Angeles from London, declaring: ‘I had to get my family out there’.

Describing the couple’s decision he said: ‘It was never walking away. It was stepping back rather than stepping down. It was a really difficult environment, which I think a lot of people saw. So I did what any father or husband would do and thought: ‘How do I get my family out of there’. But we never walked away’.

Critics have questioned the timing of his TV appearance, released just as the Queen gave a rare public statement encouraging all Britons to have the Covid-19 jab.

Others watching the film, where Harry complains about the media attention he received in the UK, urged him to ‘stop bl**dy whining’ and accused him of ‘re-writing history’ and ‘ignoring’ the multi-million dollar deals he has signed with Netflix and Spotify.

The royals have already been warned to ‘hide behind the sofa’ when the Sussexes’ incendiary interview with Oprah is broadcast on Sunday March 7, with experts saying the Late Show appearance suggests the 90-minute CBS show will focus much more on Meghan. 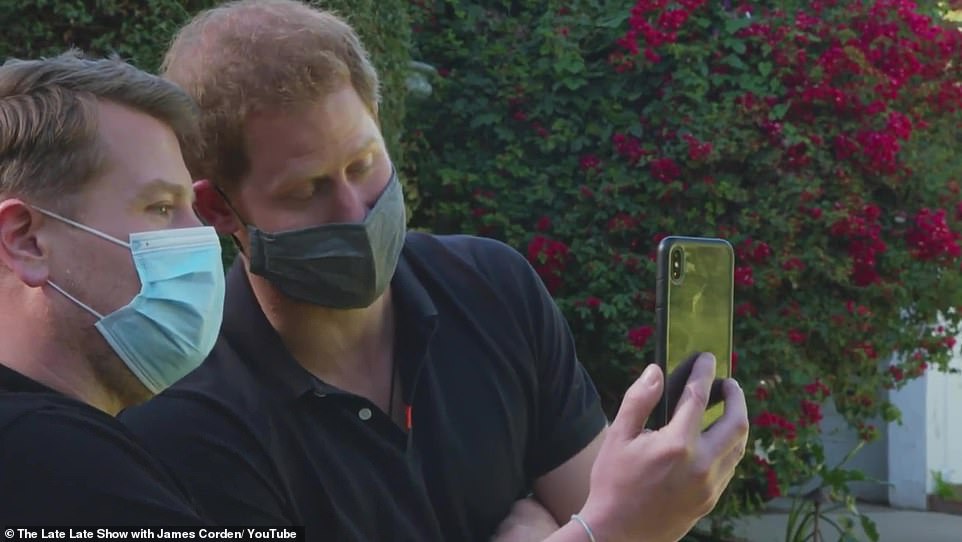 In a segment filmed before he and wife Meghan confirmed they will not be returning as working members of the royal family, Harry joined James Corden for a double-decker bus tour of Los Angeles where he broke his silence on quitting as a royal 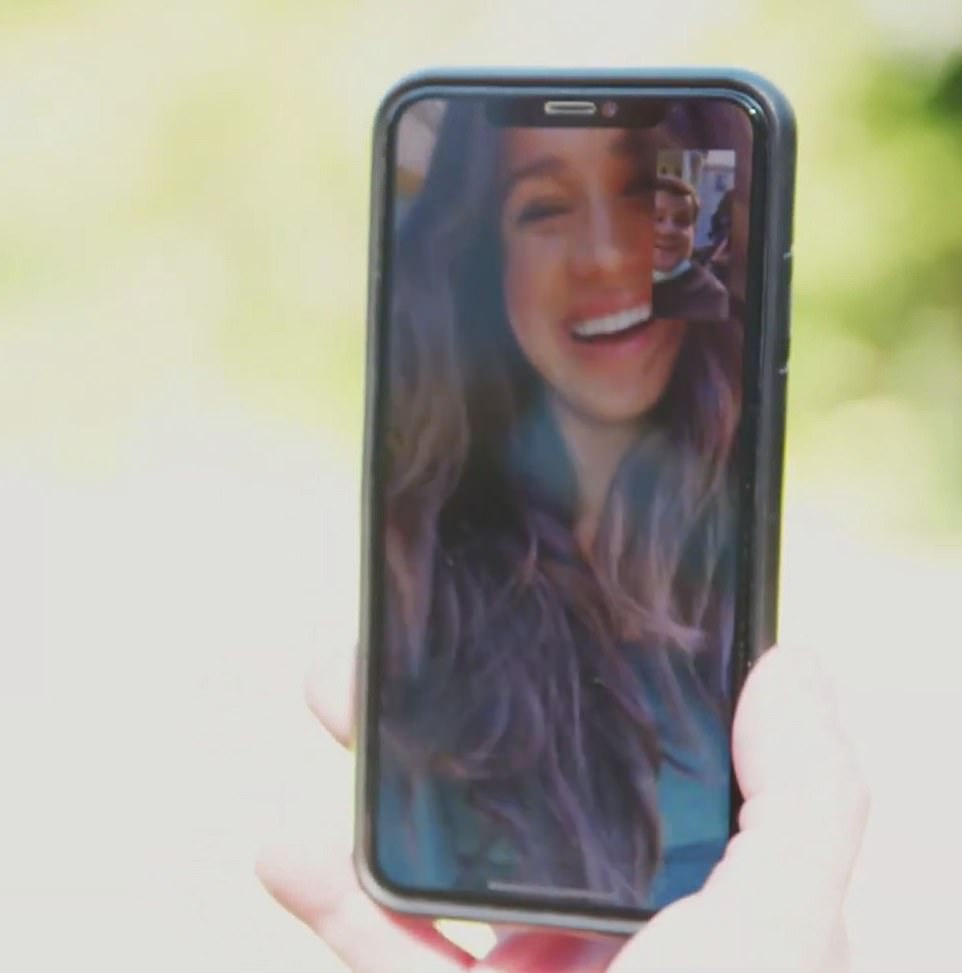 The friends video call Meghan, who in response to Corden’s suggestion they buy the Fresh Prince’s house, quipped ‘I think we’ve done enough moving’ and reveals she calls her husband ‘Haz’