The season finale against Leicester on Sunday afternoon could represent the end of an era for Tottenham.

Tottenham talisman Harry Kane finally delivered the bombshell that supporters have been fearing after revealing that he wants to leave the club in his search for the biggest honours in football.

Manchester City are frontrunners for his signature, but Premier League rivals Man United and Chelsea are also in the hunt. 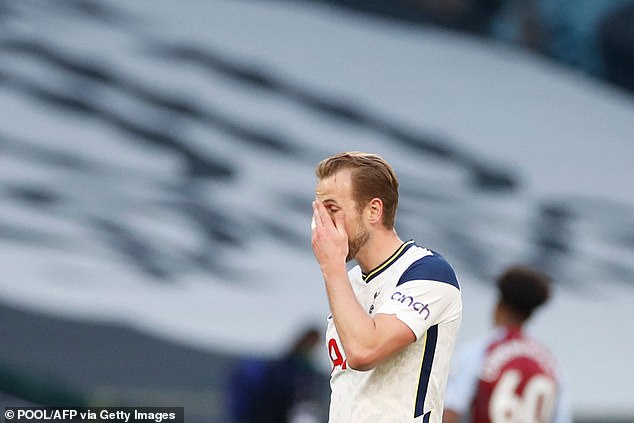 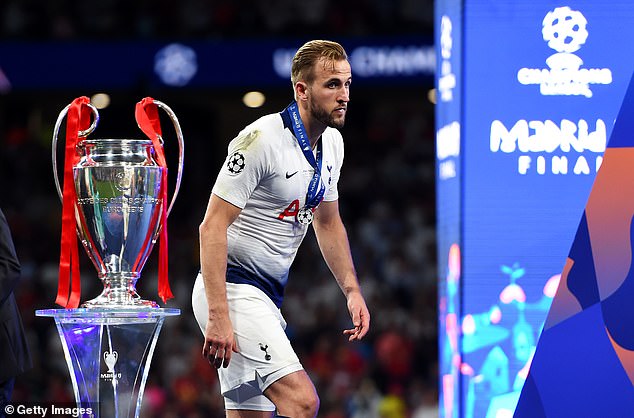 Alongside Erling Haaland, Kane will dominate the headlines in the summer transfer window as he seeks pastures new.

Europe’s top clubs will be scrambling for his signature and the only thing standing in his way is Tottenham chairman Daniel Levy – known for his tough negotiating.

Kane reiterated his desire to depart north London this summer in a revealing interview with Sky Sports’ Gary Neville. He admitted that a ‘crossroads moment’ is coming in his career and added that he even thinks there is a chance Levy will grant him his wish.

‘I don’t know, I mean he might want to sell me,’ Kane said in a conversation with his former England coach Neville for SkyBet’s The Overlap. ‘He might be thinking: “If I could get £100m for you, then why not?” Do you know what I mean? I’m not going to be worth that for the next two or three years.’

Kane’s bombshell has been years in the making and it was only a matter of time until he finally made his move in his desperate search for silverware.

Since his breakout season in 2014-15 for Spurs, Kane, alongside Sergio Aguero, has been the best striker in the Premier League and has turned the club into European regulars – helping them reach the Champions League final in 2019. 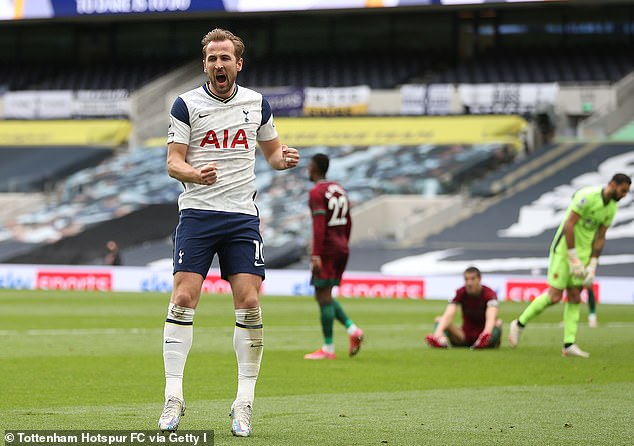 Despite Kane’s goalscoring heroics for Tottenham, the biggest honours continue to elude him 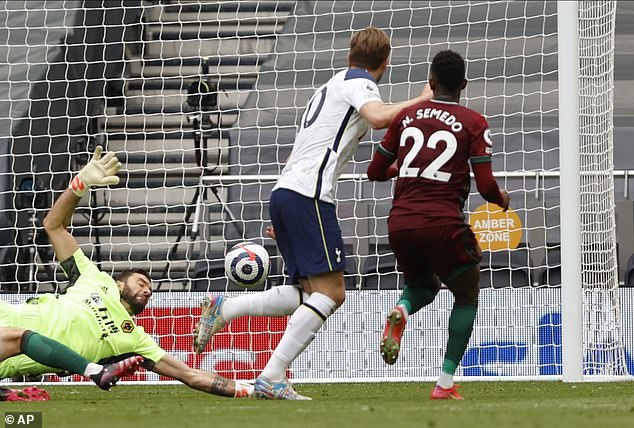 Kane is enjoying his most fruitful campaign to date, but it has been a disastrous term for Spurs

With Kane leading the line under former boss Mauricio Pochettino, Tottenham became a force to be reckoned with after years and years of mediocrity.

But despite Tottenham’s progress under Pochettino, one thing has eluded Kane and his team-mates – trophies.

And that quest for football’s biggest prizes looks set to carry on over the next couple of seasons after a rather disastrous two terms, in which the club have declined very quickly following Pochettino’s departure.

Kane, alongside Son Heung-min, has carried Spurs in recent years thanks to his heroics in front of goal but he can only do so much. And at the age of 27 and injuries creeping more and more into his game, he knows it is now or never for his big move where he can compete regularly on Europe’s biggest stage.

And Sunday’s encounter against Leicester at the King Power Stadium – which may just be his final game for his beloved club – symbolises exactly why Kane wants to leave.

After going so close in recent years to ending their long wait for silverware – dating back to 2008 – Tottenham now seem as far away as ever in terms of competing for top honours and come Sunday, they will be fighting for the final Europa League spot through the Premier League.

And they are big outsiders. West Ham sit three points above Spurs for that final Europa League berth. Regardless of whether Tottenham beat Champions League hopefuls Leicester away, West Ham need just a point at home to Southampton to qualify for Europe.

So Europa Conference League or no European football could perhaps be on the cards for Tottenham next season. But Kane won’t want anything to do with that after doing all he could to deliver titles over the past seven campaigns. 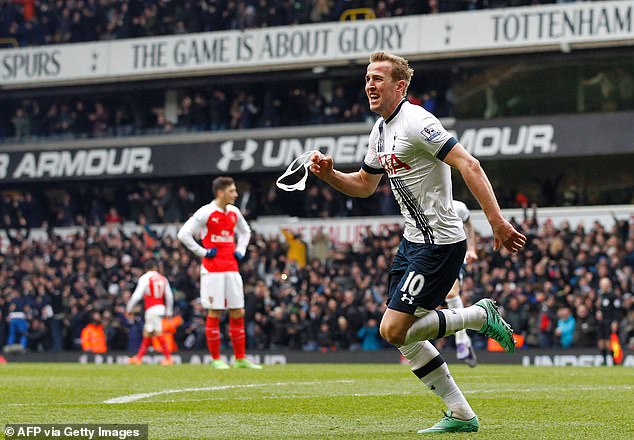 Since his breakthrough 2014-15 season, Kane has scored a remarkable 215 goals for Tottenham

Since his breakthrough campaign in 2014-15, Kane has been involved in a staggering 35 per cent of Tottenham’s goals in all competitions.

The England captain has delivered season in, season out for the north London outfit and has scored 215 goals since the start of the 2014-15 campaign – 108 more than nearest competitor Son who joined in 2015.

After emerging as Tottenham’s next big thing, his numbers have been pretty frightening, with the fewest amount of goals he has scored in a season (2018-19/2019-20) still at a rather impressive tally of 24 despite injuries hindering him.

He has 32 goals this time round, the third-highest since his breakthrough season, which is especially impressive given Jose Mourinho instilled a defensive philosophy on the side before his dismissal last month.

But it’s not just goals he brings to the table and this is why he has been heralded as one of the best No 9s in the world alongside Robert Lewandowski, Karim Benzema and Co.

On the assist front over the past seven seasons, Kane has provided 42, the fourth highest amount in that time at Spurs behind Christian Eriksen, Son and Dele Alli.

But this season his build-up play has stood out more than ever before. Kane has 16 assists overall this term, with 13 of those coming in the Premier League – sitting top of the top-flight charts ahead of Man City maestro Kevin De Bruyne.

Kane has turned into the perfect all-round player, creating nine more assists this season than he has done in any other campaign from 2014-15. 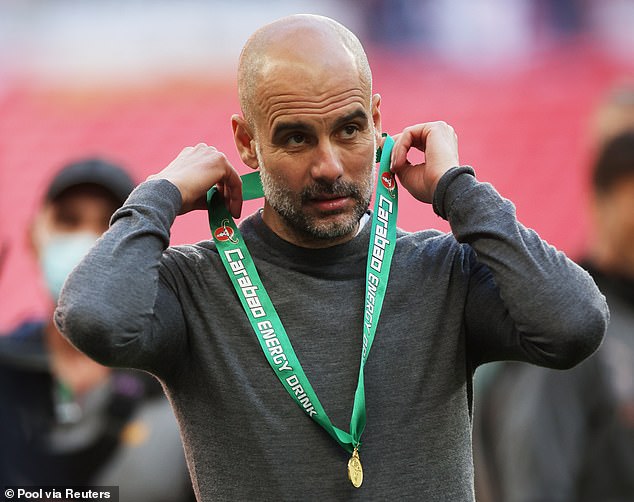 And despite City’s incredible success this season, winning the Premier League and Carabao Cup while they hope to claim their first ever Champions League title on May 29, it’s easy to see why Kane is at the top of their shopping list.

City have been majestic up top again this season, scoring 78 goals overall in the Premier League – seven more than nearest rivals United.

But this tally has been made more remarkable by the fact they have done it largely in the absence of an out-and-out striker, with the likes of Ilkay Gundogan, Phil Foden and Riyad Mahrez chipping in with goals.

Aguero’s powers, combined with injuries hampering his time in England, are on the wane while Gabriel Jesus has failed to make the spot his own up front.

So if City can win the race over United, Chelsea and Co for Kane’s services, then Pep Guardiola’s attack will be pretty frightening next season. The Etihad outfit will have another huge goal threat and assist-maker at their disposal.

In fact, Kane has a much better record in terms of goal involvements than his City counterparts this season in all competitions.

As mentioned already, the England striker has 48 goal involvements in as many games – scoring every 122 minutes and creating an assist every 243 minutes.

Belgian star De Bruyne, who missed a chunk of the season with a hamstring injury, has been City’s greatest threat this term with 26 goal involvements – nine strikes and 17 assists – while the likes of Foden, Mahrez and Gundogan aren’t much further behind. 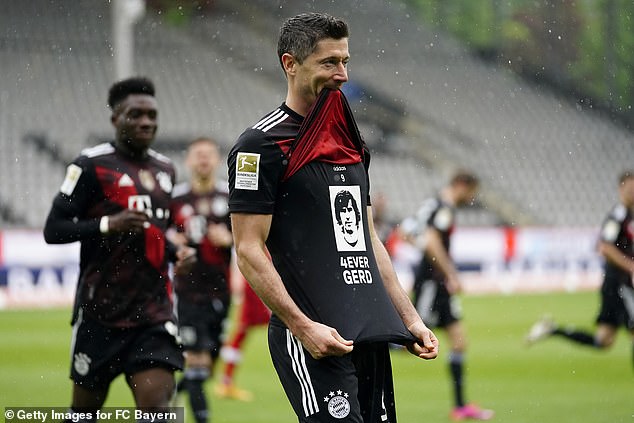 So to be succinct, City’s Premier League opponents may as well call it quits with Kane leading the line while De Bruyne, Foden and Co produce their magic behind him.

Kane, who has more goals than Benzema and Aguero over the past seven seasons, is desperate to land the biggest honours and City would provide him with the best chance of doing so – with a virtual guarantee of Champions League football every term.

There has been talk of City doing the quadruple in recent seasons but adding Kane to their ranks would make that dream look that bit more possible.

However, Spurs and their chairman Levy certainly won’t let their talisman go without putting up a fight and there could be a very long summer ahead for Kane with the added distraction of the Euros.

When star man Gareth Bale departed for Real Madrid in 2013, Tottenham had a big rebuild on their hands and didn’t spend their money too wisely. But Kane’s departure would leave an even bigger void to fill after helping usher in an exciting new era in north London.

After giving his all to his beloved Tottenham, it is likely to be a sad ending for the club’s second-highest ever goalscorer having fallen agonisingly short in his quest for silverware.