Prince Harry has told Oprah Winfrey that he feared ‘history repeating itself’ after he began dating Meghan Markle, and was reminded of his mother being pursued to her death while she was dating ‘someone who wasn’t white’.

Diana, the princess of Wales, died in 1997 alongside Egyptian film producer Dodi Al Fayed, who she had been dating for several months.

In his new show, The Me You Can’t See, Harry said he felt there were parallels in their stories when he followed in his mother’s footsteps and began dating a person of color.

‘My mother was chased to her death while she was in a relationship with someone who wasn’t white,’ he said.

‘And it all comes back to the same people, the same business model, the same industry.’ 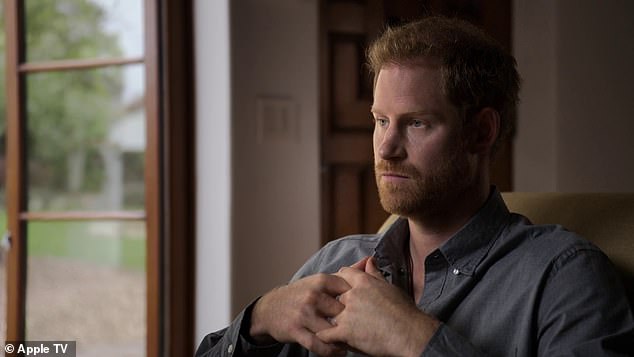 Prince Harry’s new docuseries, The Me You Can’t See, airs on Apple TV+ on May 20 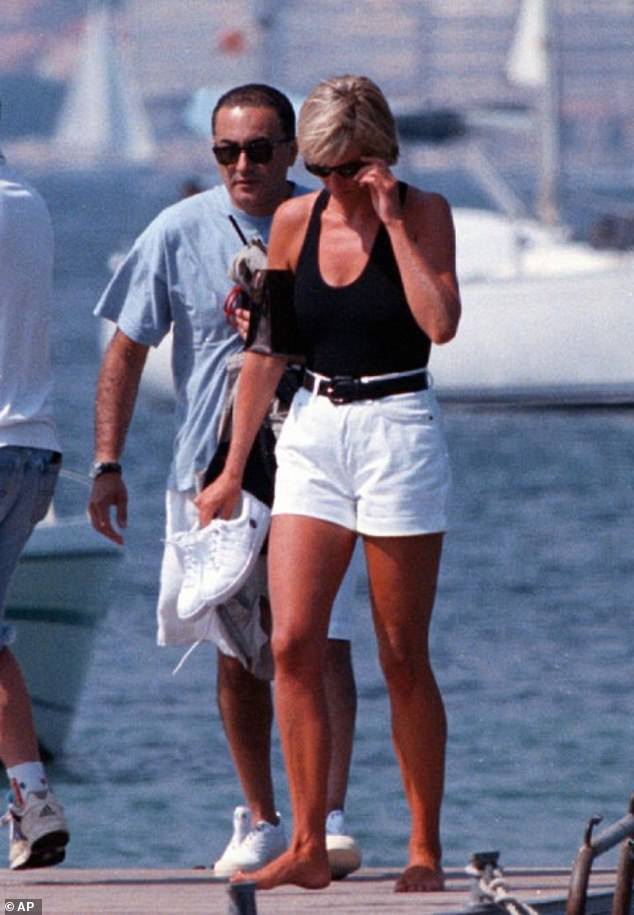 Diana, Princess of Wales, is seen with Dodi Al Fayed in St Tropez on August 22, 1997 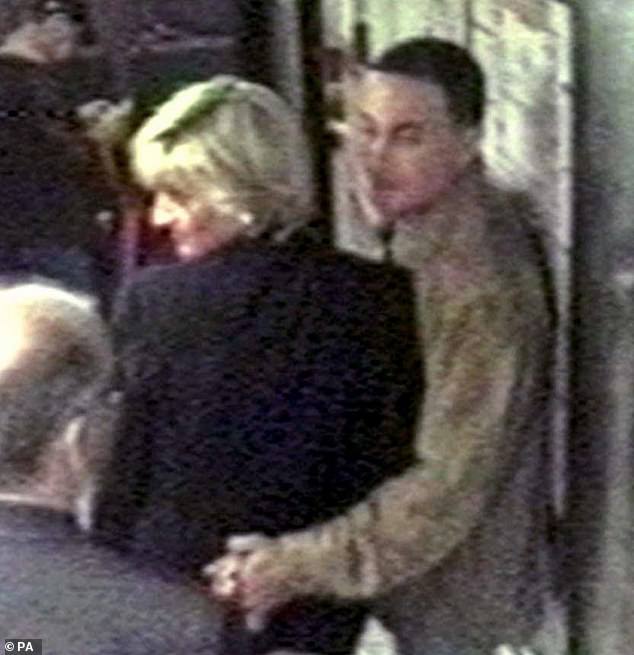 Diana is seen with Fayed inside the Ritz Hotel in Paris on the night of their death, August 31, 1997 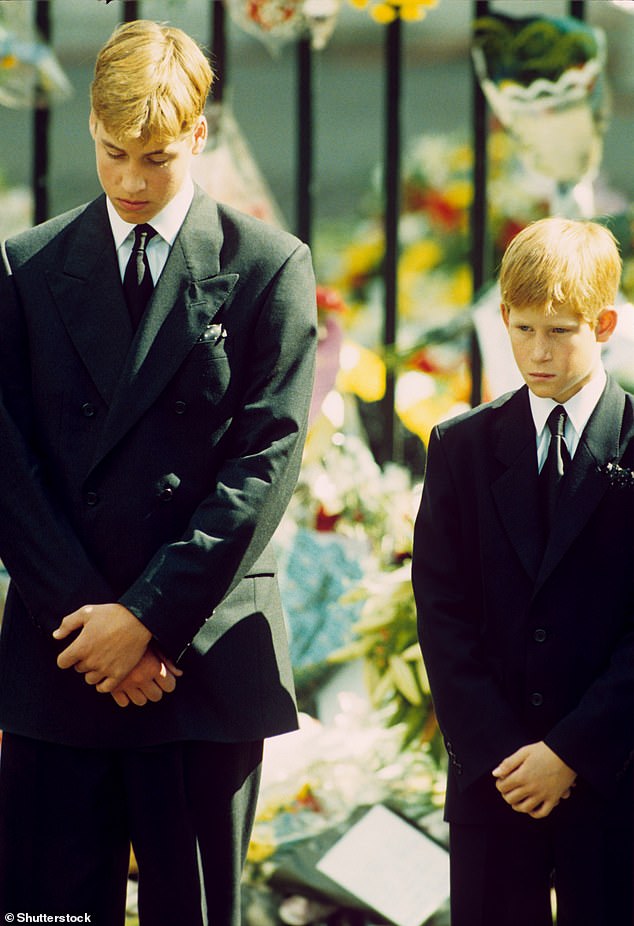 Harry is pictured, right, with his older brother William at Princess Diana’s funeral in 1997

In the candid interview, the prince discusses his failure to process the grief from the death of his mother; the helplessness he felt when he struggled to protect her; and his dependence on drugs and alcohol to numb the pain.

He spoke of his anxiety and sense of being trapped in the palace, and his family’s refusal to help when Meghan felt suicidal.

He said therapy helped him ‘break the cycle.’

‘For me, therapy has equipped me to be able to take on anything,’ he said.

He says his family tried to prevent him and Meghan from leaving when she was suicidal and admits to drinking and doing drugs in his 30s.

‘Eventually when I made that decision for my family, I was still told, ‘You can’t do this,’ Harry told Oprah.

‘And it’s like, ‘Well how bad does it have to get until I am allowed to do this?’

‘She [Markle] was going to end her life. It shouldn’t have to get to that.’

When asked if he has any regrets, he says it is not taking a stand earlier in his relationship with Markle. 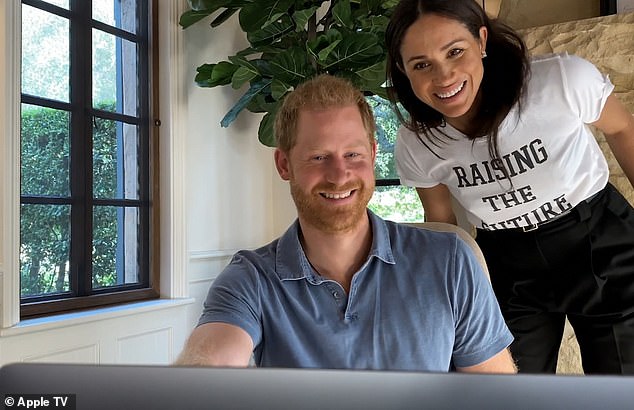 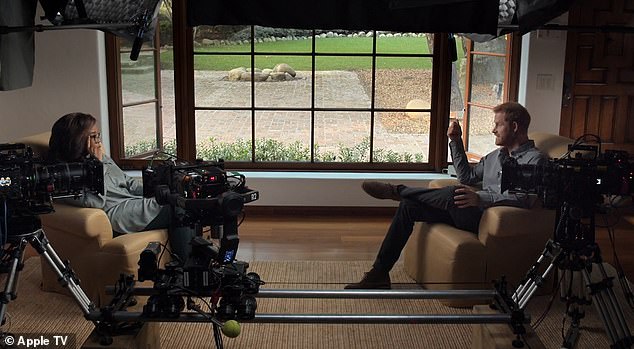 In candid interviews with Oprah Winfrey on his new show, The Me You Can’t See, he said: ‘I thought my family would help, but every single ask, request, warning, whatever it is, just got met with total silence, total neglect’

Harry told Winfrey that the trauma from his childhood ran deep.

‘I always wanted to be normal, as opposed to being Prince Harry, just being Harry,’ he says.

‘It was a puzzling life and, unfortunately, when I think about my mum the first thing that comes to mind is always the same one, over and over again: Strapped in the car, seatbelt across. My brother in the car as well, and my mother driving and being chased by three, four, five mopeds with paparazzi on.’

He said that his mother was vulnerable, exposed, and given no support.

‘She was almost unable to drive because of the tears, there was no protection,’ he recalled.

‘One of the feelings that come up is helplessness. Being too young, being a guy too young to be able to help a woman, in this case, your mother.

‘And that happened every single day until the day she died.’

The 36-year-old, who began dating Markle in 2016 and married her in 2018, said that he has been seeing a therapist for the past four years.

He told Winfrey that he found it incredibly beneficial, and the process helped him deal with the trauma of his mother’s death. 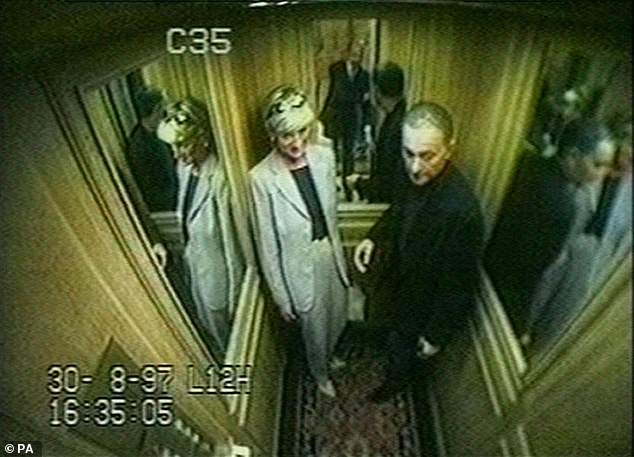 Diana is seen with Dodi Al Fayed on the afternoon before they both died, in August 1997

He explained that he simply tried to push his mother from his mind.

‘I don’t want to think about her, because if I think about her then it’s going to bring up the fact that I can’t bring her back and it’s just going to make me sad,’ he said.

‘And I just decided not to talk about it.’

In his 20s and early 30s the prince self-medicated with alcohol and drugs, he has revealed.

‘Towards my late 20s, I was starting to ask questions of should I really be here? That was when I suddenly started going, ‘You can’t keep hiding from this.”

He said his family could not understand his attitude, and his need to deal with the grief.

‘Family members have said just play the game and your life will be easier,’ Harry told Winfrey.

‘But I have a hell of a lot of my mum in me. I feel as though I am outside of the system but I’m still stuck there.

‘The only way to free yourself and break out is to tell the truth.’

He said that the attention he and his wife get ‘makes my blood boil’.

The prince explained: ‘We get followed. Photographed, chased, harassed. The clicking of cameras and the flashes of the cameras makes my blood boil.

‘It makes me angry and takes me back to what happened to my mom and what I experienced as a kid.

Harry and Meghan are pictured on January 16, 2019 – the night she told him she was suicidal

Harry also addressed the night of a charity event in January 2019 at the Royal Albert Hall. The event was held on the same day that Markle confided in her husband that she was having suicidal thoughts, and did not know how to handle it.

Markle first revealed the trauma of that night in her March interview with Winfrey.

‘She was completely sane, yet at the quiet of night, these thoughts woke her up,’ Harry said.

‘The thing that stopped her from seeing it through was how unfair it would be on me after everything that had happened to my mum and to now to be put in a position of losing another woman in my life — with a baby inside of her, our baby.

‘I’m somewhat ashamed of the way that I dealt with them.

‘And of course, because of the system that we were in and the responsibilities and the duties that we had, we had a quick cuddle and then we had to get changed to jump in a convoy with a police escort and drive to the Royal Albert Hall for a charity event. Then step out into a wall of cameras and pretend as though everything’s okay.

‘There wasn’t an option to say, ‘you know what, tonight, we’re not going to go’ because just imagine the stories that come from that.’

Coronavirus: How will the UK bring forward second vaccine doses to eight weeks?

The death toll from Coronavirus infections in Thailand increased to 6,141 cases within 24 hours

SAN DIEGO – Jon Rahm has accepted that he had no choice but to withdraw from...