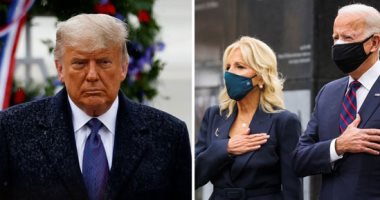 In 2020, the United States witnessed a number of stormy events, on top of which was the outbreak of the Corona epidemic, to become the first country in the world in terms of the number of injuries and deaths, in addition to a number of political and other events.

: President Donald Trump was acquitted from a congressional impeachment trial and the famous Hollywood producer was convicted of raping an actress and assaulting his assistant

The stock market crash due to the Corona epidemic, and the Dow Jones index recorded its worst decline ever

: The killing of African American George Floyd by the police, sparking a storm of anti-racism protests that lasted for several weeks

: The death of US Supreme Court Justice Ruth Bader Ginsburg and the start of her nomination battle between Democrats and Republicans. Ginsburg was the second woman to be appointed to the Supreme Court.

President Donald Trump and his wife Melania were infected with the Corona virus, less than a month before the election date

: The conduct of the American presidential elections: Joe Biden achieved a victory over the current President Donald Trump, and the latter refused to admit his defeat so far

: The Corona vaccine began to be distributed to Americans after the Food and Drug Administration’s careless approval of the Pfizer vaccine

Theta (THETA) price explodes this December. Here are the next price targets

Skull and Bones has been pushed back yet again. Ubisoft confirmed the ship sim is now...