Harvey Norman has been brutally mocked by satirical comedy group The Chaser as backlash grows over working conditions at the popular retailer.

The group sent a ‘surprise spruiker’ armed with a microphone to a Harvey Norman store to ‘help them out’ after a week of bad publicity.

The electrical goods and appliances giant faced outrage on Sunday after its official Twitter account replied dismissively to a suicidal ex-staffer.

The retailer’s billionaire founder Gerry Harvey has come under fire for keeping $22million in JobKeeper benefits despite his chain enjoying record profits.

‘Alright shoppers, come on down to Harvey Norman, where it’s JobKeeper madness,’ The Chaser spruiker announced in front of the store in the viral clip.

‘We’re on a total Twitter blocking bonanza,’ he joked. 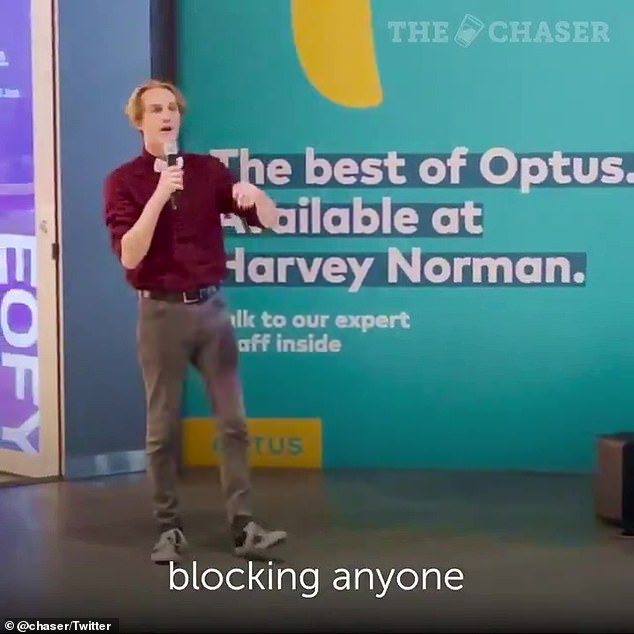 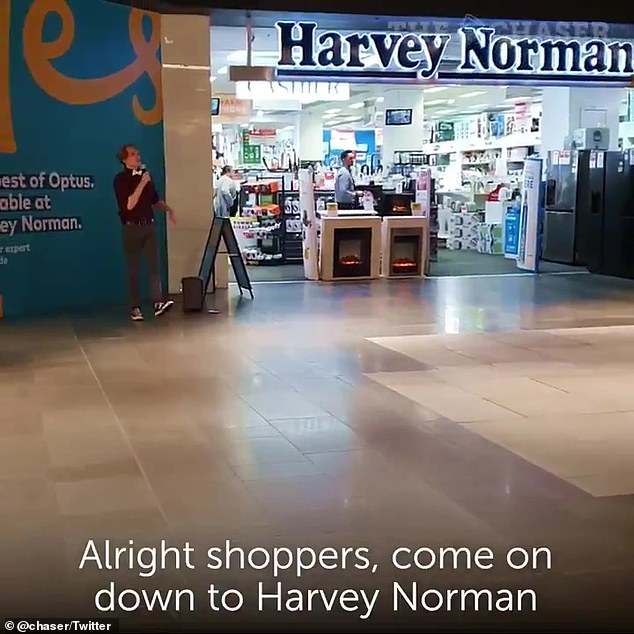 The spruiker said the store had discounts galore.

‘Hell we’ve even got discounts on our workers,’ he continued.

‘There’s absolutely no one off limits when it comes to blocking!’

Surprised staff were seen coming out to check out the commotion at the sore entrance before heading back inside as shoppers watched on.

The video ended with the man mocking the backlash over minimum wages.

‘With pay rates like these you literally cannot afford to leave the store,’ the spruiker said.

‘No folks, we’ve gone absolutely insane. Just make sure you don’t mention the union or you’ll be sent walking out the door.’ 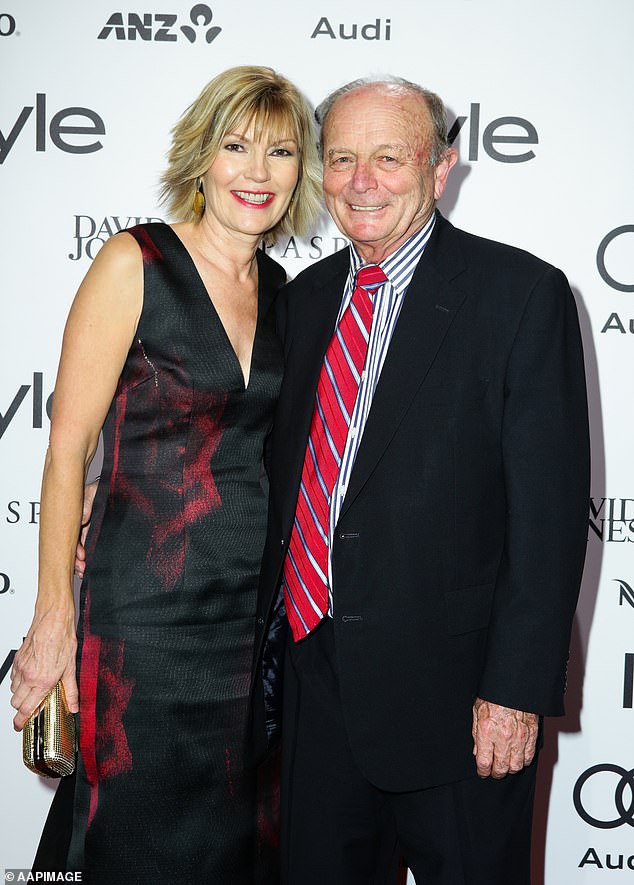 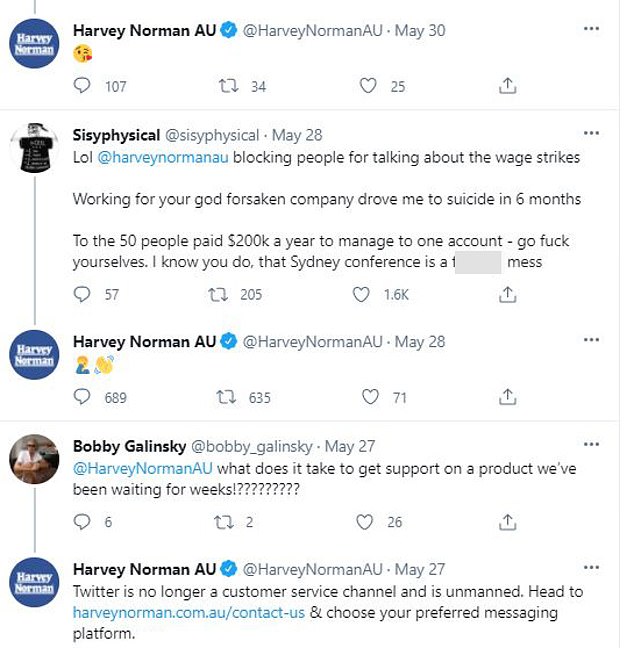 The Chaser stunt comes after a former Harvey Norman employee claimed he was driven to suicidal thoughts after six months working at the store.

He made the bombshell claims while discussing how the company had blocked accounts which made reference to protests outside a number of its stores.

‘Lol @HarveyNormanAU blocking people for talking about the wage strikes. Working for your god forsaken company drove me to suicide in 6 months,’ the ex-staffer wrote.

The official account responded with a facepalm and a waving emoji.

User Andrew Read called the company ‘greedy turds’ after being blocked, which the official account responded to with a kiss emoji.

The social media spat followed a blocking spree by the account in which the ACTU, its Secretary Sally McManus, Victorian government minister Martin Pakula and hundreds of other Twitter users were prevented from seeing Harvey Norman’s tweets.

A #boycottharveynorman hashtag began trending on Twitter on Sunday and continued on Monday, as users unleashed on the company’s responses.

‘This is most revolting, irresponsible response to a tweet containing sensitive health information I’ve seen from a corporate entity,’ replied one Twitter user. ‘I will never spend a cent with your company ever.’

‘Keep going, Harvey Norman,’ wrote another. ‘The more people that see this, the less customers you will have.’ 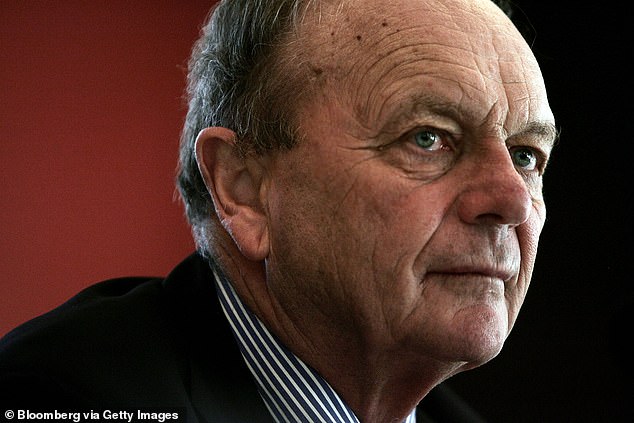 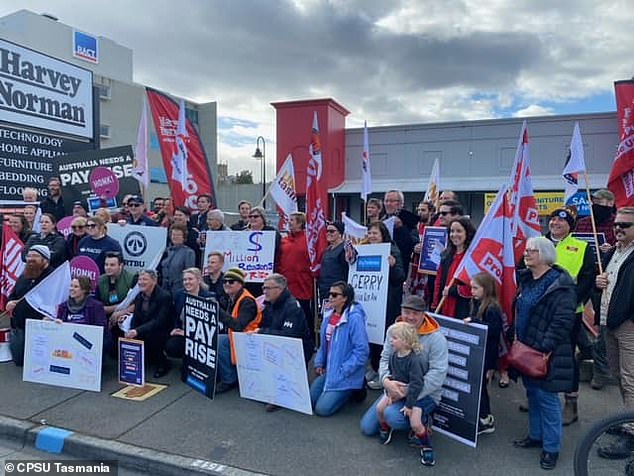 The electrical goods and appliances giant founded by Harvey and Ian Norman in 1961 had been the subject of recent headlines about its performance since the COVID-19 pandemic broke in early 2020.

The retailer’s sales boomed during Australia’s stay-at-home months last year, reporting net profit of $462million in the second half of 2020, a jump of 116 per cent on the same period in 2019.

But the fact the company, including its franchisees, received more than $20 million in JobKeeper benefits to subsidise the wages of employees, has drawn criticism from workers and unions. Harvey Norman had said it will not pay back the money to the government.

‘We took a view that the businesses that got that JobKeeper money desperately needed it and the ones that didn’t get it didn’t need it,’ Mr Harvey said.

‘That went to areas of our business that were suffering at the time. It’s not as if it went to Harvey Norman regular shop, that didn’t happen.’ 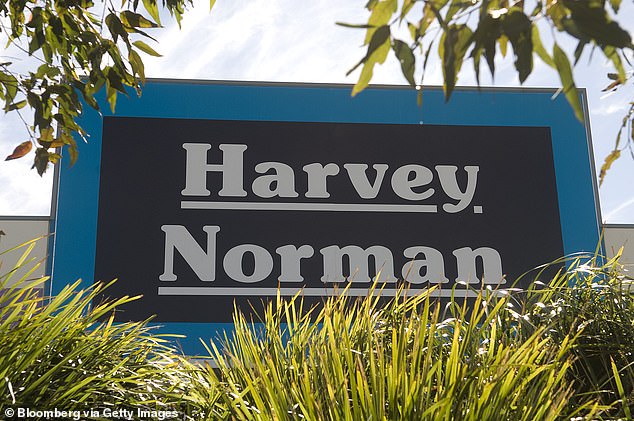 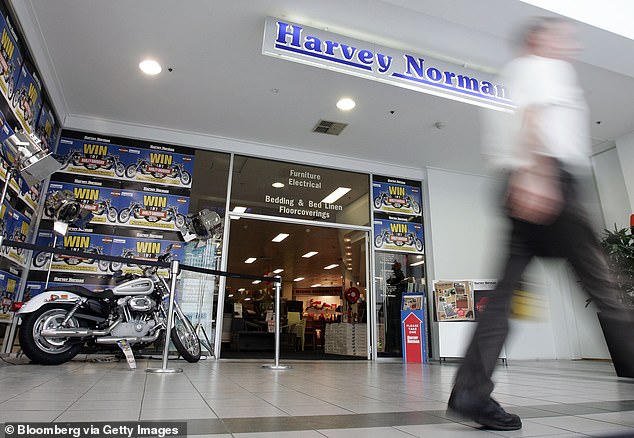 Mr Harvey had previously expressed support for a freeze on the rate of minimum pay.

There are about 200 Harvey Norman stores in Australia, and another 96 stores overseas.

The company is yet to comment on the social media spat, including to Daily Mail Australia, leaving users wondering whether the account had been hacked.

It’s Twitter bio claims that the account is ‘unmanned’, and that the platform is no longer a customer service channel for Harvey Norman.

Why students in South Africa are turning to food banks

How Fusible Is Reinventing NFT Platforms 2021

Starlin Castro hit a go-ahead, two-run single off closer Hector Neris in the ninth inning and...