Harvey Weinstein tests NEGATIVE for COVID-19 after being ‘placed in prison isolation with a 101 degree fever’ – but reps says his health is declining rapidly due to a heart condition, high blood pressure and spinal stenosis

By Valerie Edwards For Dailymail.com and Reuters 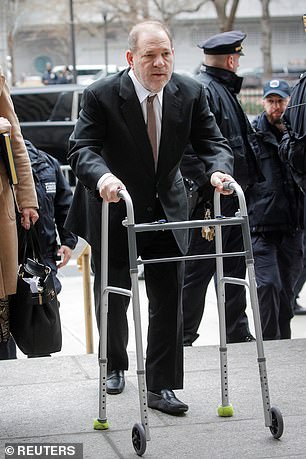 Harvey Weinstein has tested negative for COVID-19 while in prison, his spokesmen said on Thursday, but he’s being closely monitored due to other health issues

Disgraced film producer Harvey Weinstein has tested negative for the novel coronavirus while in prison, his spokesmen said on Thursday, but he is being closely monitored due to a number of other health issues.

Weinstein, 68, is serving 23 years in prison at the Wende Correctional Facility in New York after being convicted in February for sexual assault and rape. Weinstein, who pleaded not guilty at the trial, is appealing.

His health became a cause of concern earlier this week when it was reported that he was running a high fever and was being tested for the virus.

‘We can report that Mr Weinstein’s fever has dropped but is still being closely monitored,’ Weinstein’s spokesman Juda Engelmayer and Craig Rothfeld, his health representative said in a statement on Thursday.

‘We can also report at this time that he does not have COVID-19,’ they added.

Weinstein was transferred to Wende Correctional from Rikers Island in March after being sentenced to 23 years behind bars for sexually assaulting former production assistant Mimi Haleyi in 2006 and raping aspiring actress Jessica Mann in 2013.

Since Weinstein’s very public fall from grace, his health has continued to make headlines beginning back when he appeared in court using a walker.

But Englemayer said ‘it should come as no surprise that Mr Weinstein has numerous maladies and conditions including a heart condition, high blood pressure and spinal stenosis’.

‘We are working with the NYSDOCCS and the excellent team at Wende CF to ensure Mr Weinstein receives the proper medical attention he needs,’ he added.

According to the statement, Weinstein though he has shown some improvement his underlying health conditions ‘are continuing to decline, get worse, and need treatment’.

At the time of his sentencing earlier this year, his attorneys had requested that he only serve five years in prison, due to his declining health. 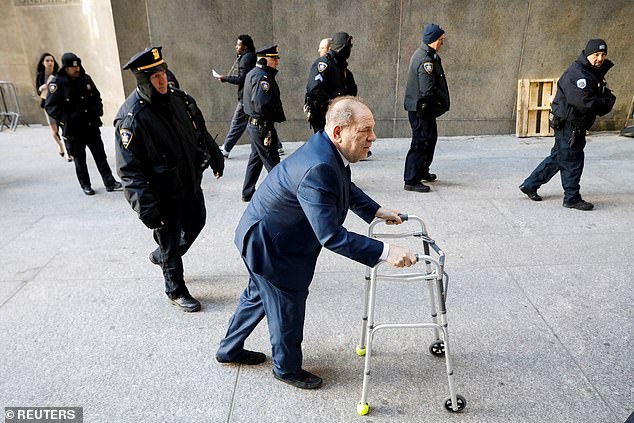 Since Weinstein’s very public fall from grace, his health has continued to make headlines beginning back when he appeared in court using a walker

But his spokesman said ‘it should come as no surprise that Mr Weinstein has numerous maladies and conditions including a heart condition, high blood pressure and spinal stenosis’. Weinstein is currently being held at the Wende Correctional Facility (pictured) in New York

Just hours after a judge handed Weinstein his sentence, the former media mogul was rushed to a New York hospital with chest pains.

He underwent a heart procedure to remove a blockage and stayed at the hospital for about six days.

At the time, initial reports about Weinstein said he had contracted COVID-19, but his spokesman declined to comment on his health status.

Weinstein is still waiting for his trial in Los Angeles where he will face sexual assault and rape charges involving five women.

The extradition process has been delayed, due to the pandemic.

In total, Weinstein is facing 11 charges for sexual assault in California. If convicted on all charges, he could face up to 140 years to life in prison.

Ask the Captain: Do pilots usually land airlines manually or by computer?

The conservative currents are full of fanaticism, repression and hatred towards that different world that goes out of its guidelines. Watch over life, yes, but only when your...

(Trends Wide) -- Authorities found 44 migrants dead inside a truck in San Antonio, Texas, according to City Councilwoman Adriana Rocha Garcia, who says she was told about...