Bill Clinton was on board Air Force One when he heard that one of his party’s most valued donors was calling time on his marriage and running off with Anna Wintour.

The then U.S. president picked up the phone and called Shelby Bryan’s long-suffering wife to offer his deepest sympathies.

That gesture, made back in 1999, made clear just how important Wintour’s wealthy Texan lover and his family had become to Clinton — not to mention the status they held in U.S. public and political life.

As the dust settled on their scandalous affair, Vogue editor-in-chief Wintour and telecoms tycoon and entrepreneur Bryan went on to become one of America’s most powerful couples, a match seemingly made in heaven when it came to bridging the worlds of fashion, business and politics.

But now, 21 years after their passionate love affair made headline news on both sides of the Atlantic, it looks as though it is all over. 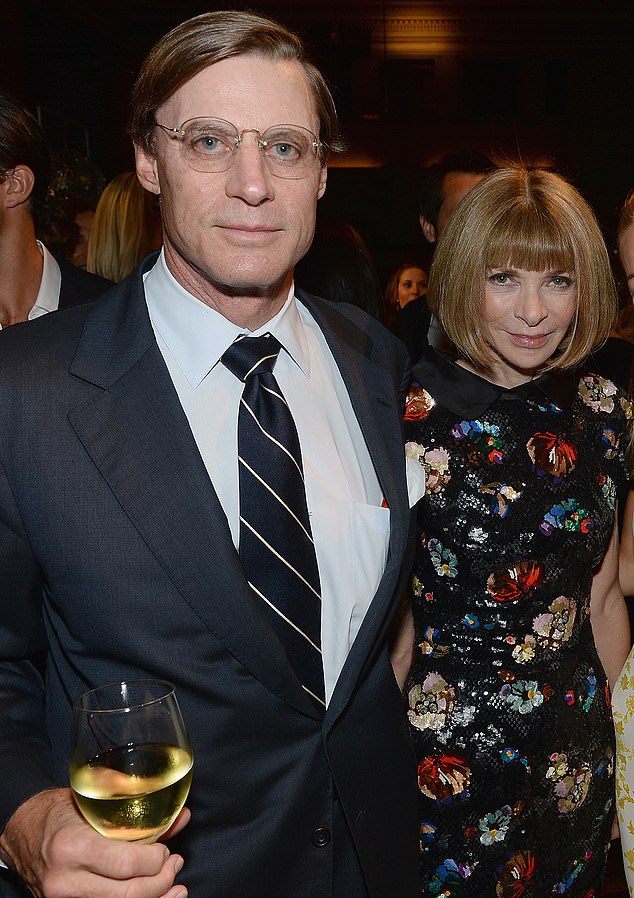 The news emerged yesterday in New York where the 70-year-old British magazine supremo has reigned for more than three decades as fashion’s most influential woman.

Not surprisingly, given how much both she and Bryan sacrificed to be together, speculation about the cause of their break-up is rife.

There is also a question mark over whether the pair were ever actually married, with a well-placed source indicating they never did tie the knot, and that the relationship had been over for some time.

According to several reports in the U.S. media, the pair’s romance began to cool as far back as 2013, when 74-year-old Bryan was revealed to owe £1.2 million in unpaid taxes to the IRS — the American equivalent to the Inland Revenue.

There have been rumours for a while, and denials, too, that Bryan might be returning to former wife Katherine, whose subsequent husband, investment banker Damon Mezzacappa, died in 2015.

A source close to Katherine Bryan is said to have insisted that the pair have simply remained friends because of their children.

Tongues have also been wagging about Wintour’s friendship with actor Bill Nighy — since 2010 the pair have been spotted together at fashion shows, theatres and restaurants in New York and London.

In January this year, Wintour was said to have been ‘beaming’ and looked ‘happier than ever’ when she and Nighy were spotted eating together in New York — so happy, in fact, she even momentarily took off her trademark sunglasses.

Nighy, 70, has always declined to comment on whether their friendship is love, actually. 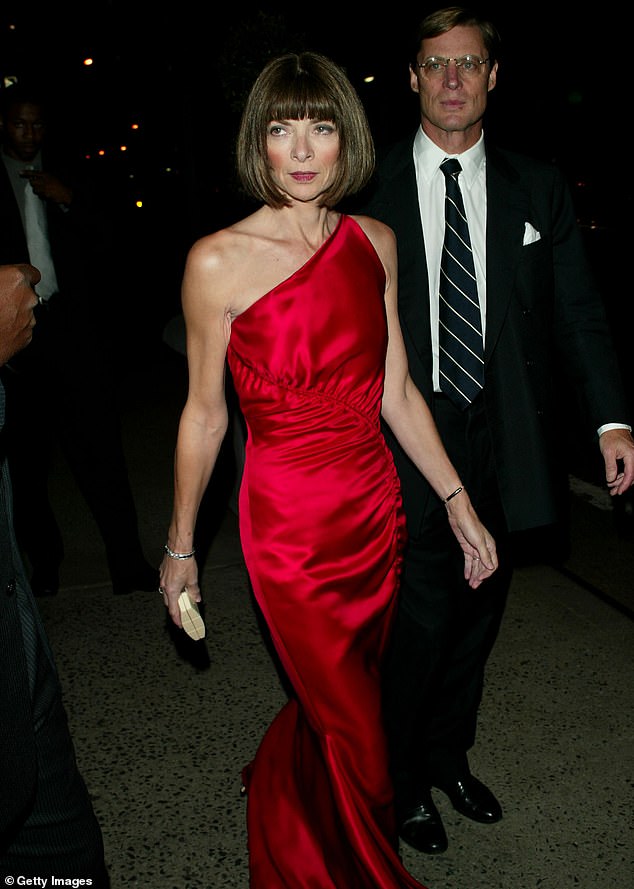 The powerful pair began dating back in 1999, with their romance causing a stir among New York’s elite because Bryan reportedly walked out on his wife to be with Wintour. Pictured: Wintour and Bryan arriving at the New Yorkers for Children Fall Gala in New York, 2002 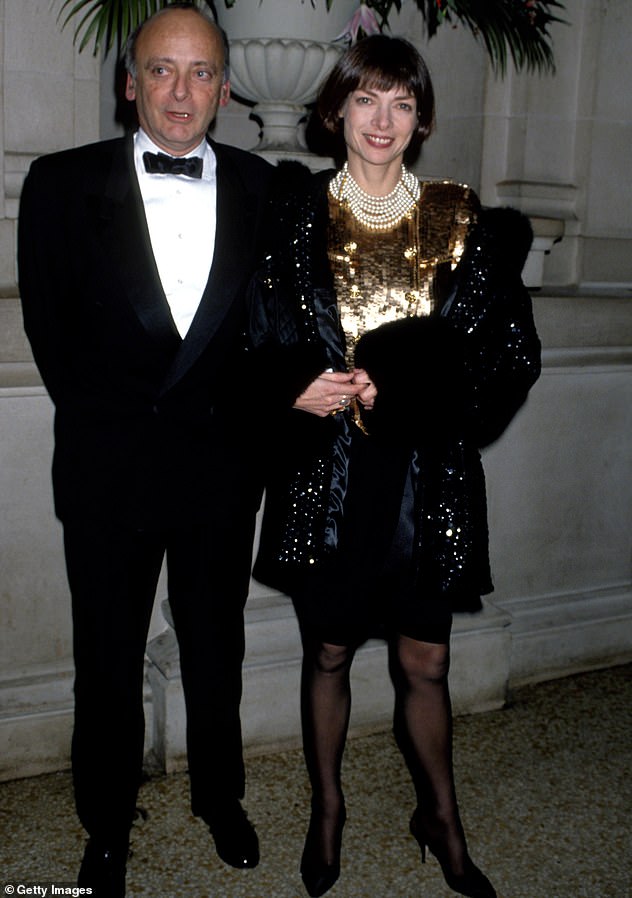 In 2015, when asked about it, he replied: ‘Obviously I have nothing to say about that. There are a lot of rumours about me and probably about Anna Wintour.’

Certainly, it has been a while since Wintour — who has two grown-up children, Charles, 35, and Bee, 33 with her first husband, South African child psychiatrist Dr David Shaffer — has been seen with Bryan.

One of the last times they were photographed together as a couple was back in 2018 at the U.S. Open tennis championships.

On that occasion, the sulky looking couple appeared barely able to look at each other, and one picture taken shows Wintour leaning away from him — their body language frosty.

The image marked a stark contrast to previous years, when Wintour was openly affectionate with Bryan.

Another shot taken again at the U.S. Open, 11 years earlier in 2007, for example, shows her with her arms draped lovingly around him, her cheek resting against his hair.

Indeed, in the early, heady days of their romance, the pair were said to have been unable to keep their hands off each other.

Not long after their relationship became public, the couple were seen in Bryan’s hometown, Houston, at a party for his brother held at the exclusive Bayou Club.

There, they were said to have acted ‘like a pair of going-steady adolescents at a spin-the-bottle party’.

According to one observer, quoted in the 2005 biography of Wintour, Front Row: ‘Shelby and Anna spent a good part of his party making out, tongues down each other’s throats, seated on a bench in a little foyer.’

Another likened the pair, who were both in their 50s, to a ‘young couple in love’, and said they were the first on the dance floor: ‘They were kissing and he was all over her.’ 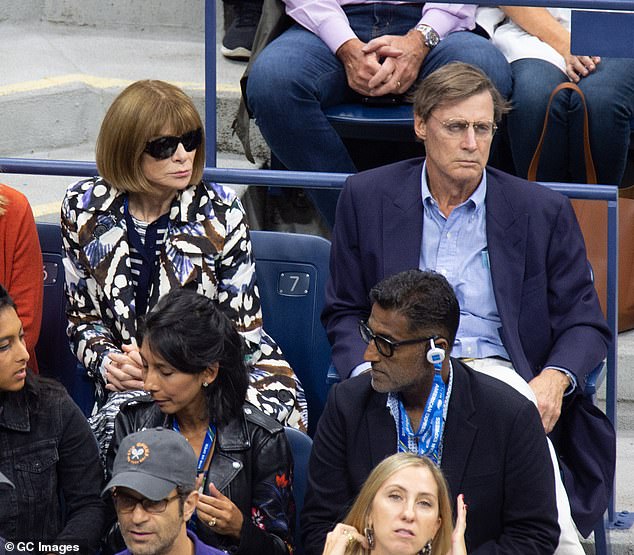 One of the last times they were photographed together as a couple was back in 2018 at the U.S. Open tennis championships where Anna Wintour was pictured leaning away from Bryan

The chemistry between the pair was evident from the moment they met in November 1997, when they were seated next to each other during a New York City Ballet gala — both were married to other people.

At the time, Bryan was regarded as a Democratic Party rainmaker, having raised $1.5million for candidates including Al Gore, during fundraisers held at his Upper East Side home. He also served on Clinton’s Foreign Intelligence Advisory Board.

He and Wintour were certainly more than a match for each other. The unabashedly ambitious Wintour was by then being described as the ‘godmother’ of the fashion mafia, while Bryan was described by a 1999 New York Magazine article as a ‘flashy extrovert with undisguised social ambitions’.

Their meeting came at a time when Wintour was showing an increasing interest in politics.

In December 1998, she’d put ‘the extraordinary Hillary Clinton’ on the front cover of Vogue at the start of the President’s Congressional impeachment.

One source, speaking at the time her affair with Bryan became public, said that ‘Shelby was this real Type-A player kind of guy, and he gave her access to a whole different world’.

Inevitably, there was fall-out at home. Although it wasn’t the first time Bryan, a father of four, had cheated on his wife, it seemed like she was ready to forgive him again.

David Shaffer, too, seemed willing to patch things up with Wintour, although he was said to have been ‘upset and disturbed’ when he learned about his wife’s affair from an answering machine message left by Bryan.

But by July the following year, Wintour and Bryan were spotted leaving New York’s elegant Parc Vendome apartments together one morning, with Wintour wearing a chinchilla wrap she’d worn the night before.

Given her reputation for icy coolness, the scandal was met with delight by U.S. gossip columnists.

Wintour’s arch nemesis Tina Brown, who at the time was editing the now defunct Talk magazine, also ran a damning piece which Wintour tried to stop, accusing Bryan of lacking transparency in his business affairs and of borrowing millions to fund his lavish lifestyle as well as ‘appalling’ behaviour with women.

A British journalist who attended a party at Wintour’s New York townhouse in 2002 described her as having ‘embarked on the second act of her American dream with a rich, new boyfriend’.

In February this year, Wintour was said to have been ‘beaming’ and looked ‘happier than ever’ when she was pictured out with actor Bill Nighy. Pictured: The pair in January this year

Wintour’s divorce from David Shaffer had just come through and, as though to underline the romantic shift in her life, the party invitation bore the name of both Wintour and Bryan.

Asked about her relationship with Shelby she would only say ‘we’re very happy’, before adding that in splitting from her husband ‘my main concern was for the kids. I just wanted to make sure it was as easy as possible for them’.

The couple kept their relationship largely private, although behind closed doors they were said to have bonded well with each other’s children and maintained good relations with their ex-spouses.

But then came something of a change in Bryan’s once glittering professional fortunes. In 2013, it emerged he owed more than £1.2million in property back taxes and was slow in paying the IRS back.

Reports at the time also said he had lost a great deal of his original $30million fortune during the property recession.

The timing couldn’t have been worse. After the couple brought in millions of dollars for President Obama’s re-election campaign, Wintour was said to have had her hopes pinned on becoming U.S. ambassador to Britain.

The appointment was not forthcoming.

On the professional networking site LinkedIn, Bryan, who attended Harvard Business School, describes himself as ‘self-employed’ and has only 91 connections — something of a come-down for the former CEO of ICG Communications who was once a major political player.

Since then, the couple have been spotted out together less frequently. Whether or not Wintour blames Bryan for her failure to get Obama’s nomination is not clear.

Is it possible, of course, that the relationship has simply run its course and that lockdown has only served to hasten its demise. 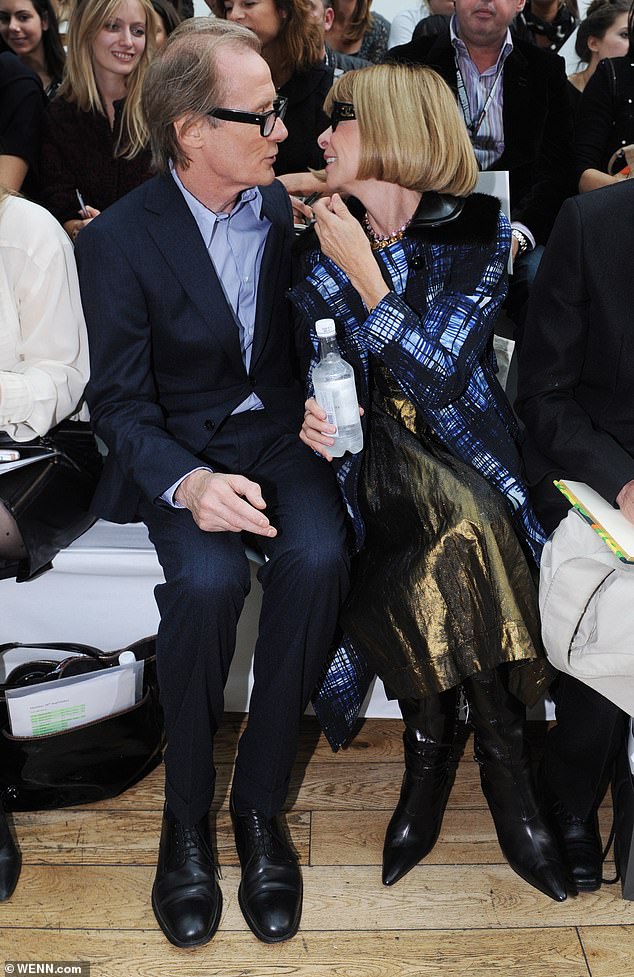 Rumours have been circulating about Anna Wintour and Bill Nighy since 2015 as the pair have been spotted together at fashion shows, theatres and restaurants in London and New York City

But whatever the truth, the break-up comes in the midst of what has been something of an annus horribilis for Wintour.

Her former colleague and confidant André Leon Talley turned on her in May in his controversial memoir The Chiffon Trenches.

He accused her of using people, and claimed she had frozen him out because he was ‘too old, too overweight, too uncool’ for her.

He went on to claim that there was an ‘endless’ list of writers, stylists and models whom she had cast onto a ‘tattered heap during her powerful rule’. He added: ‘She is immune to anyone other than the powerful and the famous who populate . . . Vogue.

‘She has mercilessly made her best friends people who are the highest in their chosen fields.’

Then in June, at the height of the Black Lives Matter movement, Wintour was forced to apologise amid accusations of racism at Vogue publisher Condé Nast.

In a memo, she admitted letting ‘hurtful and intolerant behaviour’ go unchecked during her 32-year reign at Vogue, as well as not doing enough to champion black staffers and designers.

She added: ‘We have made mistakes, too, publishing images or stories that have been hurtful or intolerant. I take full responsibility for those mistakes.’

Both professionally and personally, then, the world in which Wintour reigned supreme is changing fast.

For a woman famous for consistency — daily tennis at 5.45am, twice-daily blow dries, dozens of pairs of the same Manolo Blahnik heels — it must be unnerving.

Next month she will turn 71 — an age when she could be forgiven for putting her well-heeled feet up and enjoying the $35million fortune she has accrued.

But as she heads into the future, a single woman once more, the woman nicknamed ‘Nuclear’ Wintour — thanks to her bomb-proof reputation — appears to be showing no sign of slowing up.

The relationship of the US dollar to gold, printing press, and dragon … the biggest secret of the United States

Home Preservation: A Guide to Preserving Your Home for the Future (VHS VIDEO)

Turkish President Recep Tayyip Erdogan has travelled to the disputed Nagorno-Karabakh region as part of a...

Euro 2020: From lifeguard to the Wales national team – the incredible journey of Kieffer Moore