A haunting final photo has been revealed showing the seconds just before two seaplanes collided in mid-air in Alaska, killing six and seriously injuring 10 others.

Investigators with the National Transportation Safety Board released the photo on Tuesday as part of their in-depth review of the tragedy that occurred in May 2019 near Ketchikan.

The image was retrieved from an unidentified dead passenger’s Canon EOS Rebel digital camera, which survived the 3,350-foot plunge to earth, providing investigators with invaluable data on how the disaster unfolded.

The NTSB said that the position of the two planes meant that their pilots’ views of each other were obscured until the last second, and that tracking systems failed to warn them about nearby aircraft. 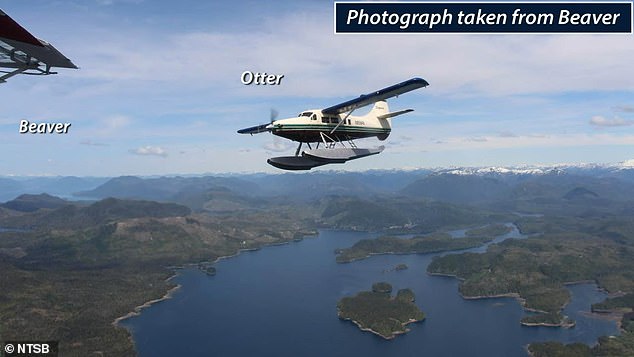 The NTSB on Tuesday released this photo, taken by a passenger on Mountain Air’s single-engine de Havilland DHC-2 MK 1 Beaver seconds before it collided with a larger de Havilland DHC-3 Otter in Alaska in May 2019, killing six 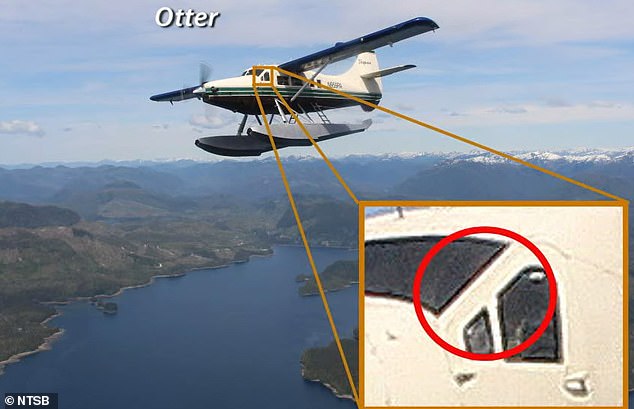 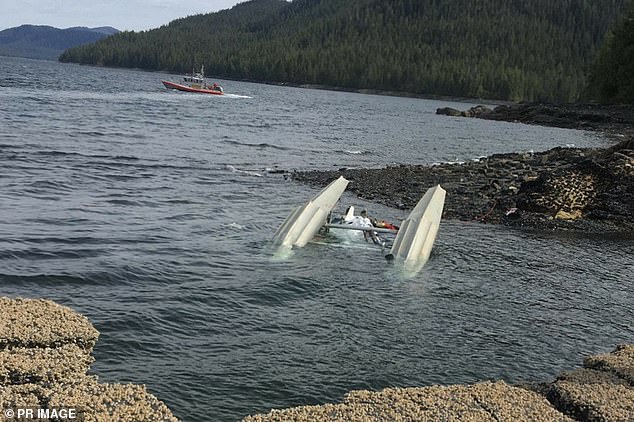 Wreckage is seen following the 2019 collision. The NTSB said that the position of the two planes meant that their pilots’ views of each other were obscured until the last second, and that tracking systems failed to warn them about nearby aircraft

Mountain Air Service pilot Randy Sullivan and his four passengers, and a passenger in a plane owned by Taquan Air were killed. Ten people were injured when the aircrafts converged at 3,350 feet.

The NTSB probable-cause finding determined that the limitations of the ‘see and avoid’ concept – in which pilots are expected to visually identify collision risks – prevented the pilots from seeing each other before the collision. The board also cited a lack of alerts from the planes’ display systems.

The board during its meeting also noted the planes’ structures or a passenger had limited the pilots’ views.

The NTSB, citing information provided by the operators, said the Ketchikan-based floatplanes were on sightseeing tours and both ‘converging on a scenic waterfall’ before returning to Ketchikan when the crash occurred.

Chairman Robert Sumwalt said the pilots didn´t see each other in time to avoid a collision. 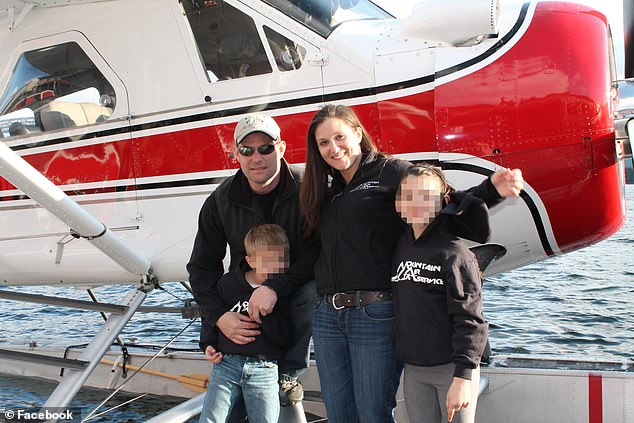 Killed was Randy Jason Sullivan, 46, who was piloting the de Havilland DHC-2 Beaver (above) owned by Mountain Air Service that collided with a larger sightseeing plane 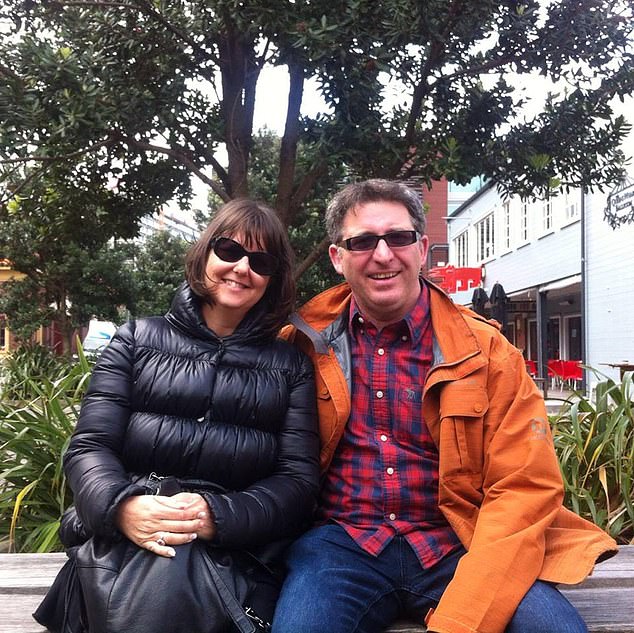 Simon Bodie, 56, (pictured) a management consultant from Sydney, was also among those killed when two sight-seeing planes collided in mid-air over the sea in Alaska 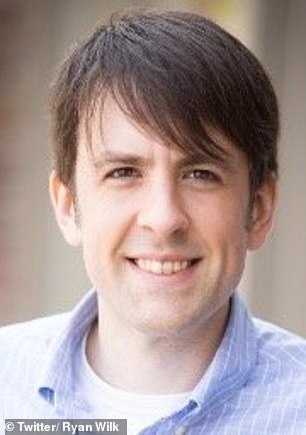 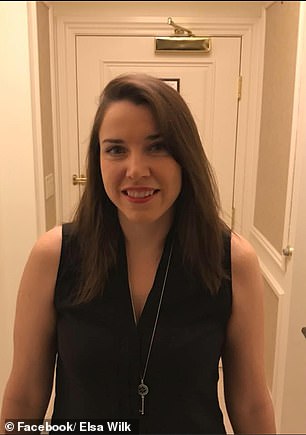 Passengers in the Beaver who were killed included 39-year-old Ryan Wilk from Utah; and 37-year-old Elsa Wilk of Richmond, British Columbia 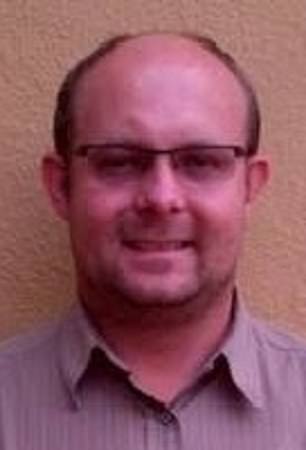 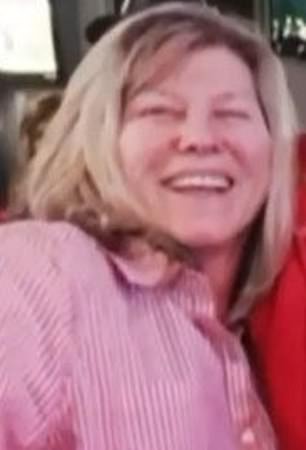 Staff members told the board the Otter pilot recalled seeing a white and red flash, then a tremendous collision.

The Beaver pilot’s view would have been obstructed by the airplane’s structure and a passenger seated to his right during the critical moments before the crash. The Otter pilot’s view was obscured by a window post, the NTSB staff said.

William Bramble, the NTSB´s human performance specialist, told the board that both planes were equipped with systems that track other planes, but visual and audible alerts weren’t working in either plane.

‘The Otter pilot seemed to miss seeing the target (the other plane) on the display because he last recalled looking at the display about four minutes before the collision,’ Bramble said.

Contributing to the crash were the Federal Aviation Administration allowing new transceivers that lacked alert capability and the lack of a requirement for air-traffic-advisory systems to have audio alerts on planes flown by companies that carry passengers, according to the probable-cause finding.

Board members also recommended Tuesday that the FAA require planes that operate in high-traffic tour areas broadcast their locations to other aircraft.

A Taquan Air plane is seen in Ketchikan, Alaska 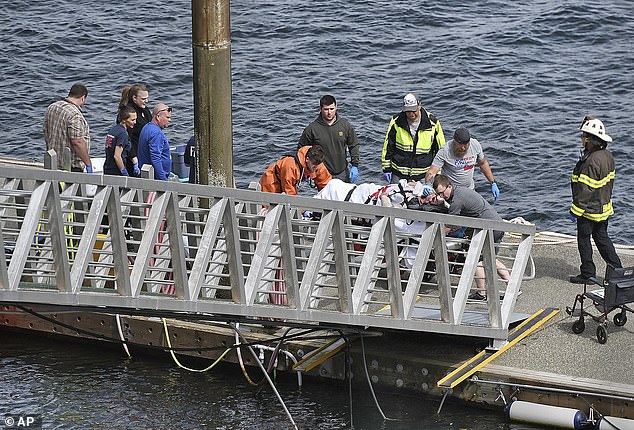 Emergency response crews transport an injured passenger at the George Inlet Lodge docks on May 13, 2019, in Ketchikan, Alaska

The FAA said it had begun in October ‘a sweeping examination of safety issues specific to the challenges of flying in Alaska.’

Property for sale has ‘a get together in each and every room.’ Examine out the unassuming Texas home

The agency said it would ‘carefully consider all of today’s recommendations from the NTSB as that work continues.’

It said some are similar to recommendations an FAA safety team made after the accident and that the FAA is weighing or implementing the safety team proposals.

He said before an Otter system was upgraded in 2015, its system could generate visual and aural alerts. After the upgrade, he said there were no algorithms to generate alerts. NTSB investigator Aaron Sauer said the upgrades installed in 2015 met the FAA standard at the time. 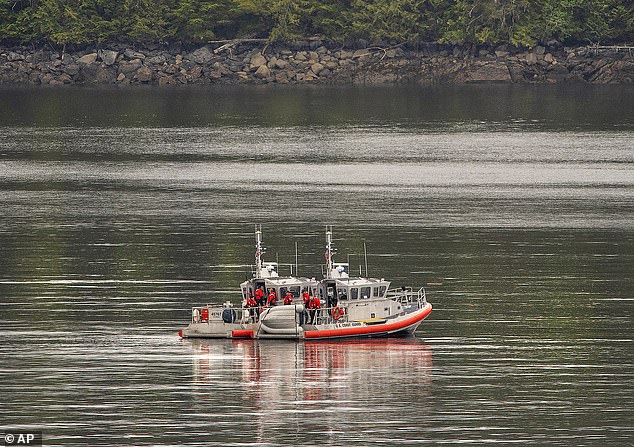 Two Coast Guard response boats drift through George Inlet as part of a search effort on May 14, 2019 near Ketchikan, Alaska

A safety issue the board noted was what it said was an ‘inadequate checklist’ used in Taquan Air operations.

The checklist found in the Otter did not include an item for a device that transmits certain altitude data, and the board recommend the carrier update its checklists, according to a summary of the board’s actions. The device on the plane had been off for two weeks, Sumwalt said.

Messages seeking comment were left for Taquan Air on Tuesday.

At least three people could be heard saying, ‘brace brace brace,’ on a camera recording audio before the Taquan plane hit the water.

The Mountain Air Beaver plane broke up in flight, scattering debris across 3,000 feet.

Property for sale has ‘a get together in each and every room.’ Examine out the unassuming Texas home

A household on the serious estate industry in Fort Truly worth, Texas, has been heading insane on Twitter for a rationale you could not count on.The four-bed room,...

I am retired with Social Protection and a condition pension. Above the final 30 decades I have accrued a ton of “junk” from eBay EBAY, -.04%. Now, I’m...

In new media appearances, Sam Bankman-Fried brazenly mused about his culpability in FTX's crash. He denied hoping to defraud stakeholders, but conceded the lax oversight of FTX's pitfalls. ...

The Princess of Wales put on a stylish show for US royal fans today as she stepped out for her first solo engagement of her and William's whirlwind...