Hazard’s future is ambiguous with Ancelotti at Real Madrid 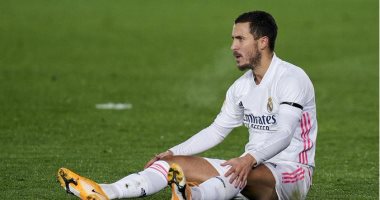 Real Madrid midfielder Eden Hazard is going through an unstable period with Italian Carlo Ancelotti, the coach of the Real Madrid during the current season 2021-2022. According to the Spanish newspaper AS, the status of Belgian Eden Hazard is not yet known under the leadership of Italian coach Carlo Ancelotti, especially in light of the readiness of Brazilian star Vinicius Junior in the center of the left wing.

Hazard missed Real Madrid’s victory over Inter Milan last Wednesday with a clean goal, in the first round of the Champions League group stage, and remained confined to the bench throughout the match.

The newspaper added that Hazard’s participation as a primary or alternative with Real Madrid depends on the duration of his readiness and effectiveness, which was notified by Italian coach Carlo Ancelotti.

She explained that Real Madrid’s doctors warn against constantly pushing Eden Hazard in matches, especially as the player realizes that he is not 100% ready.

Belgian star Eden Hazard, Real Madrid’s player, is still trying to restore his strong level with his former team Chelsea, since he joined in the summer of 2019, in a deal that exceeded the 100 million euro barrier.

newspaper reported ” ABC“The Spanish, that the Italian coach Carlo Ancelotti, the coach of the royal team, sent a message to the Belgian star in order to participate mainly in the matches, in light of the brilliance of the Brazilian star Vinicius Junior, who succeeded in brilliance and obtaining the primary position at the expense of Hazard in the recent matches.

The newspaper added that the Italian coach told Hazard that he must be more effective and ready if he wants to participate mainly in the matches during the coming period.

Hazard, 30, has suffered many injuries since his arrival at Real Madrid, which has caused his level to decline significantly from what he was doing with his former team Chelsea.

The Belgian star participated with Real Madrid in only 47 matches in various competitions, scoring 5 goals.

Real Madrid is preparing to face its host Valencia, scheduled for next Sunday at nine in the evening, at the Mestalla stadium, at the top of the fifth round of the Spanish League.

Thank you to everyone without any exception.. Dani Alves bids farewell to the fans of Sao Paulo with a private message