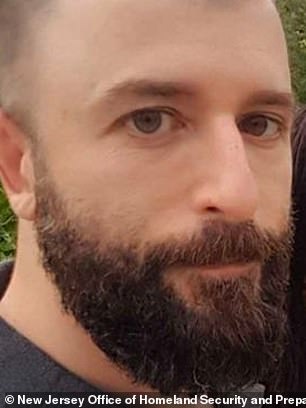 Rinaldo Nazzaro, 47, the founder of The Base, a neo-Nazi terrorist organization, once worked for the Department of Homeland Security, it has been reported

The 47-year-old American founder of a neo-Nazi terrorist organization who is currently living in Russia was once employed by the Department of Homeland Security, the federal agency confirmed on Wednesday.

Rinaldo Nazzaro, the founder and leader of The Base, reportedly posted letters of appreciation from DHS and the Pentagon complimenting him for his job performance.

He is thought to have worked in intelligence analysis at DHS and in terrorism training for the military.

One letter that has Marine Corps letterhead praised Nazzaro for helping to kill 13 targeted insurgents.

The three undated letters included one from DHS as well as two that featured official Marine Corps letterhead, according to Vice.

‘I can confirm that Rinaldo Nazzaro worked at DHS from 2004 to 2006,’ a spokesperson for DHS told Vice.

DHS has not commented on the authenticity of the letter, which Nazzaro posted on the social media site Telegram, a platform that is thought to be popular among far-right extremists.

‘Your outstanding service has been greatly appreciated,’ says the DHS letter that Nazzaro is said to have received from his then-boss.

‘All the best in the future – I will miss you.’ 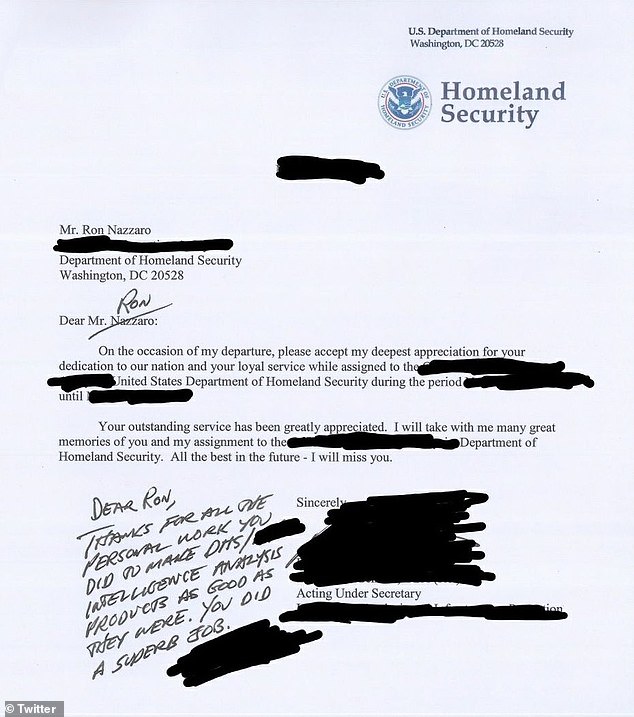 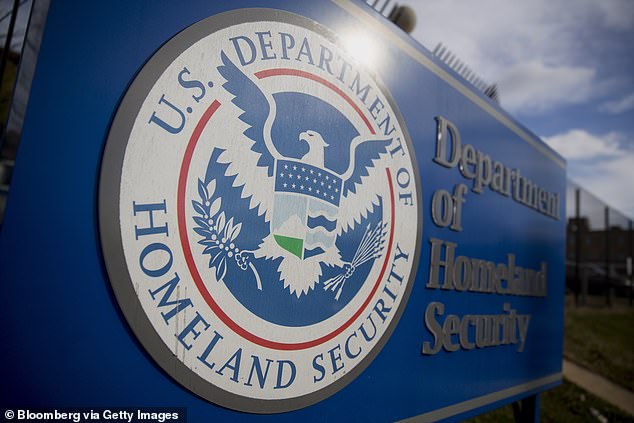 DailyMail.com has reached out to the Department of Homeland Security for comment. The image above shows DHS headquarters in Washington, DC

The same letter also contains a handwritten note which read: ‘Thanks for all the personal work you did to make DHS/Intelligence Analysis […] as good as they were. You did a superb job.’

One of them reportedly read: ‘Furthermore, your targets led to an assessed 13 enemy killed in action.

‘Your performance as an intelligence professional reflects an impressive understanding of the insurgency in Afghanistan and tireless devotion to duty.’

DailyMail.com has sought comment from DHS and the Pentagon.

Nazzaro’s past work for sensitive government agencies in the field of national security underscores a problem facing policymakers – how to identity and root out extremists in the armed forces and security services.

Newly confirmed Defense Secretary Lloyd Austin told senators last month that the Pentagon’s job is to ‘keep America safe from our enemies. But we can’t do that if some of those enemies lie within our own ranks.’

Austin is not the first secretary to grapple with the problem. Racism has long been an undercurrent in the military.

While leaders insist only a small minority hold extremist views, there have been persistent incidents of racial hatred and, more subtly, a history of implicit bias in what is a predominantly white institution.

Based on 2018 data, roughly two-thirds of the military’s enlisted corps is white and about 17 per cent is black, but the minority percentage declines as rank increases. 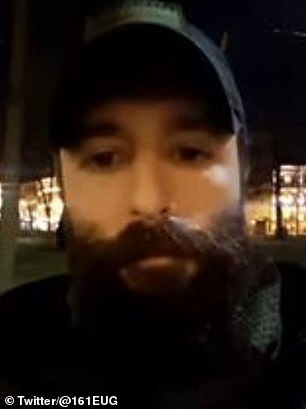 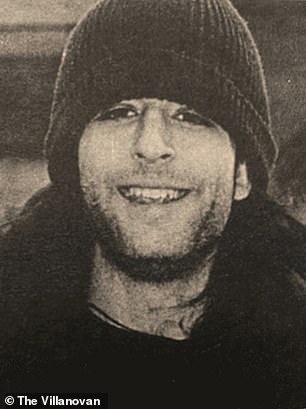 An image of The Base ringleader ‘Norman Spear’ (left) is seen alongside a 1994 image of ‘Ron Nazzaro’ in the Villanova student newspaper (right). In January of last year, The Guardian revealed Nazzaro, who has used several aliases online, as the leader of The Base

The US population overall is about three-quarters white and 13 per cent black, according to Census Bureau statistics.

The Base is considered a white supremacist terrorist organization that was founded in 2018 in Washington State, according to the Southern Povery Law Center.

The organization ‘believes society should be pushed to collapse so a white ethnostate can arise out of the ruins,’ the SPLC said.

Unlike other extremist groups, it’s not focused on promulgating propaganda — instead the group aims to bring together highly skilled members to train them for acts of violence.

Nazzaro, who identity as the head of The Base was revealed in January of last year by The Guardian, was heard on secret recordings indicating that he hoped to recruit trained members of western militaries to his organization. 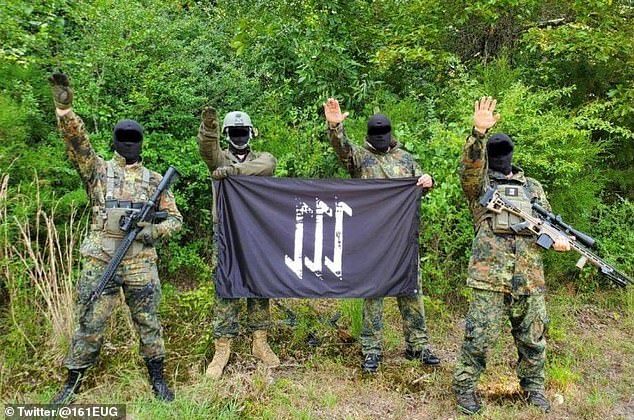 Memebers of the Base are seen posing for a photo with their faces obscured. The Base is considered a white supremacist terrorist organization that was founded in 2018 in Washington State

‘And from that point by virtue of the chaos that ensues, that would naturally present some opportunities for us … law and order starts breaking down, power vacuums start emerging…for those who are organized and ready, to take advantage of those.’

Last year, federal authorities arrested three alleged members of The Base in Georgia for planning to kill an antifa couple.

Michael Helterbrand of Dalton, 25; Jacob Kaderli of Dacula, 19; Luke Lane of Silver Creek, 21 face charges of conspiring to kill members of a militant anti-fascist group and participation in a criminal gang.

An analysis of information in charging documents by the Atlanta Journal-Constitution revealed the group’s ‘regional training camp’ a few miles south of downtown Rome, Georgia.

An undercover law enforcement agent visited the 105-acre property in Silver Creek to participate in training with the group, according to an affidavit.

Three other suspected neo-Nazis, who are also members of that group, were arrested in January of last year – just days before they were believed to be headed to a pro-gun rally in Virginia where they were alleged to have plotted a violent provocation. 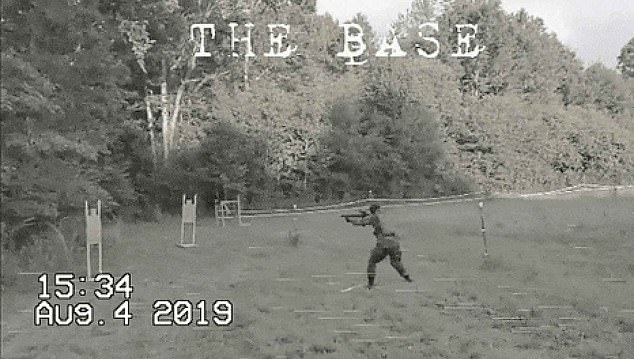 A screen capture from a video posted to the group’s chatroom shows members conducting drills at a recent ‘hate camp’. The organization ‘believes society should be pushed to collapse so a white ethnostate can arise out of the ruins,’ according to the Southern Poverty Law Center

US citizens Brian Lemley, 33, and William Bilbrough, 19, as well as Canadian Patrik Jordan Mathews, 27, were all charged with felony firearms violations.

Last September, Vice reported that Nazzaro was paid by the Pentagon to work with US special forces on counterterrorism initiatives.

The news site reported that Nazzaro was employed by the Department of Defense in 2014 as a contractor assigned to work with Special Operations Command (SOCOM).

SOCOM is a secretive organization with the US military which is normally assigned to target Islamic jihadists groups like al-Qaeda and ISIS.

Nazzaro advised special forces officers on military training and counterterrorism in the MIddle East in 2014, according to Vice.

In May 2019, Nazzaro reportedly told other members of The Base in encrypted chats online that he did ‘multiple tours in Iraq and Afghanistan over five years.’

He said he ‘was a targeteer’ and a ‘contractor’ during his military service. Nazzaro also posted a photo of himself in what appears to be Baghdad, according to Vice.

Luke Austin Lane, 22, Jacob Kaderli, 19, and Michael Helterbrand, 25, (left to right) were arrested in Georgia in January 2020 on charges of conspiracy to commit murder and participation in a criminal gang. They allegedly plotted to assassinate an antifa couple

Last June, the BBC reported that Nazzaro was directing operations for The Base from his apartment in St. Petersburg, Russia.

He reportedly moved to Russia after marrying a Russian woman that he met in New York City.

The BBC also reported that Nazzaro was once employed as an analyst for the Federal Bureau of Investigation.

Nazzaro, a native of northern New Jersey, is considered an unlikely candidate to have turned to extremism given that he attended a prestigious Roman Catholic prep school before enrolling at Villanova University in Philadelphia.

According to NorthJersey.com, Nazzaro was on track to graduate from Villanova with a degree in philosophy, but he left the school before finishing his studies in 1994. The reason he left early is unclear.

Nazzaro now goes by aliases on social media, where he appears as ‘Norman Spear’ or ‘Roman Wolf.’

The US State Department includes an Iranian academy

The Legend of Zelda: Breath of the Wild 2 News Coming ‘This Year’

The Legend of Zelda: Breath of the Wild 2 News Coming 'This Year'